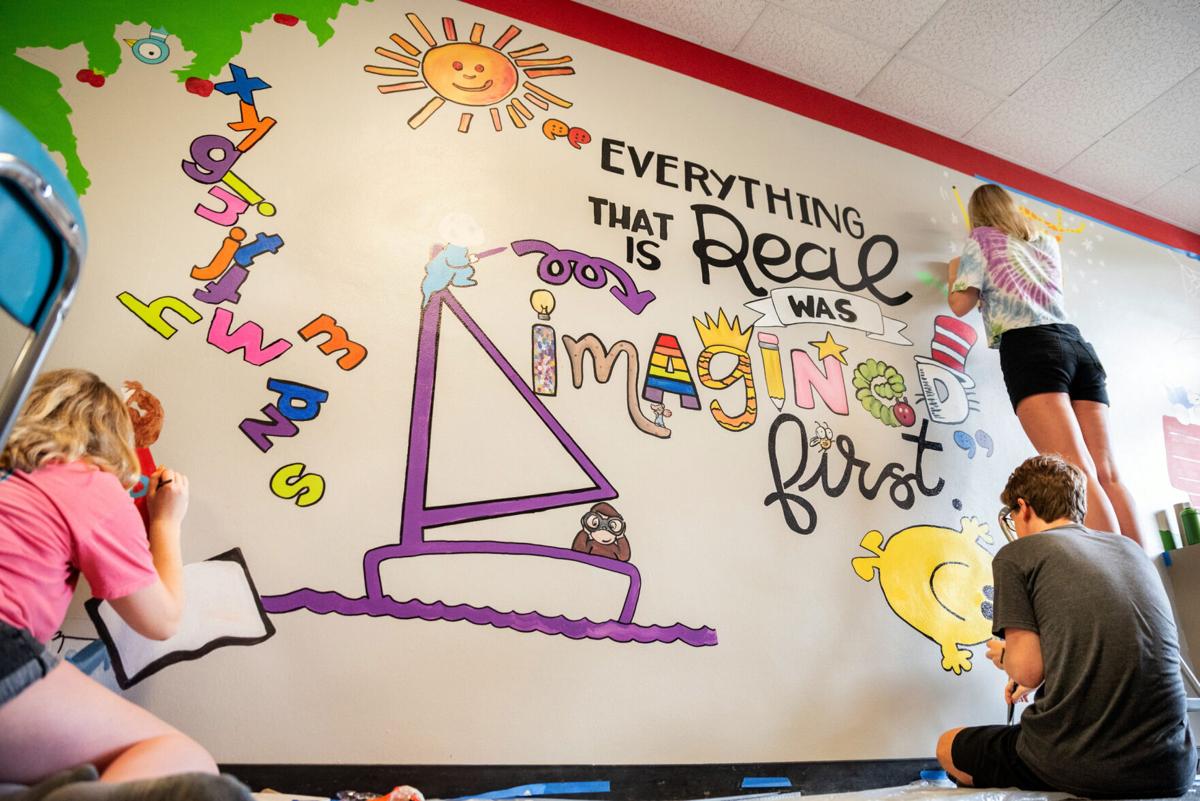 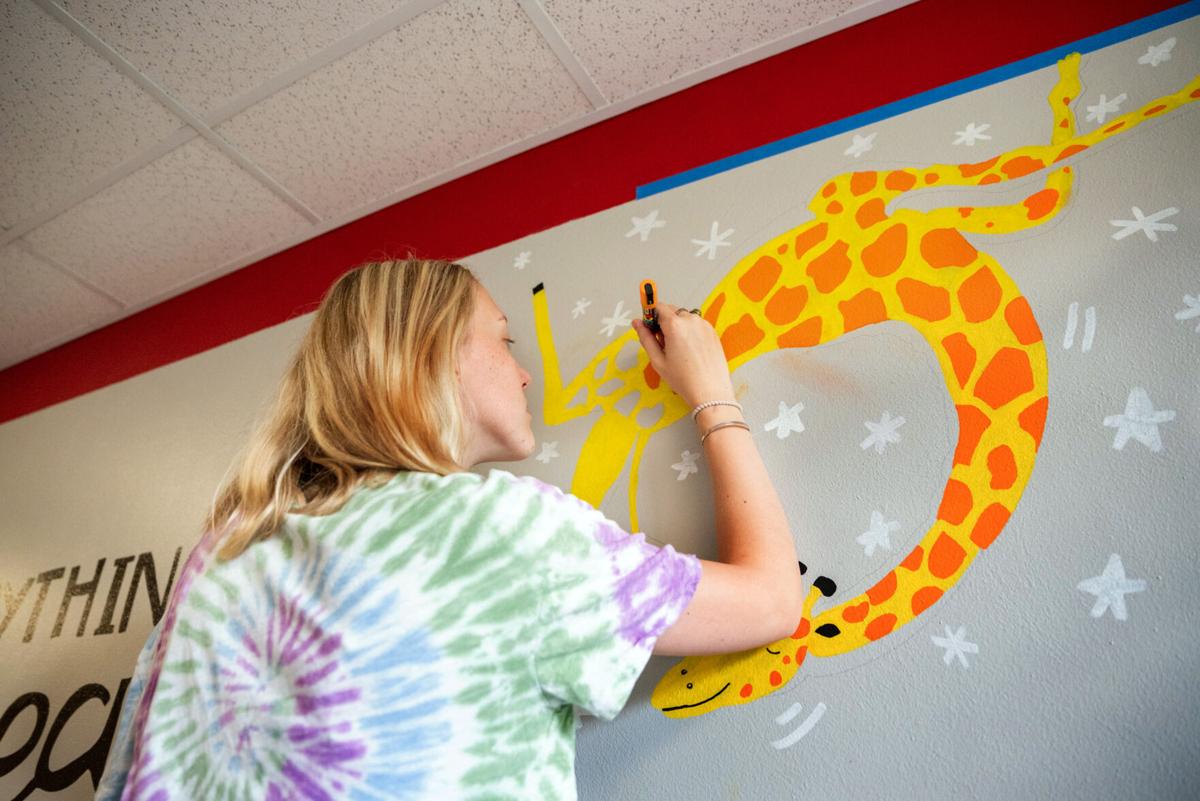 TANNER MONDOK | Herald Lexi Pintar, a senior at Hickory High School, works on a mural in a hallway at Artman Elementary School in Hermitage. 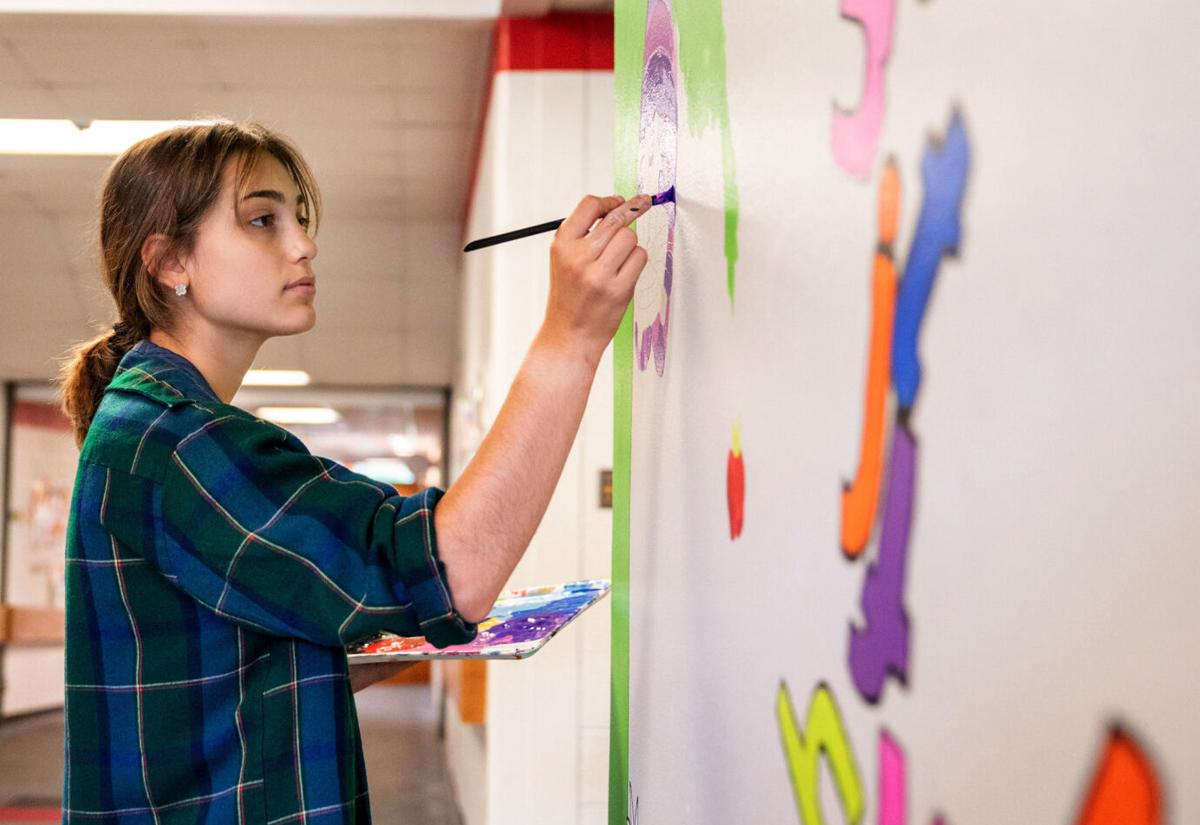 TANNER MONDOK | Herald Izzy Gingras, a junior at Hickory High School, works on a mural in a hallway at Artman Elementary School in Hermitage. 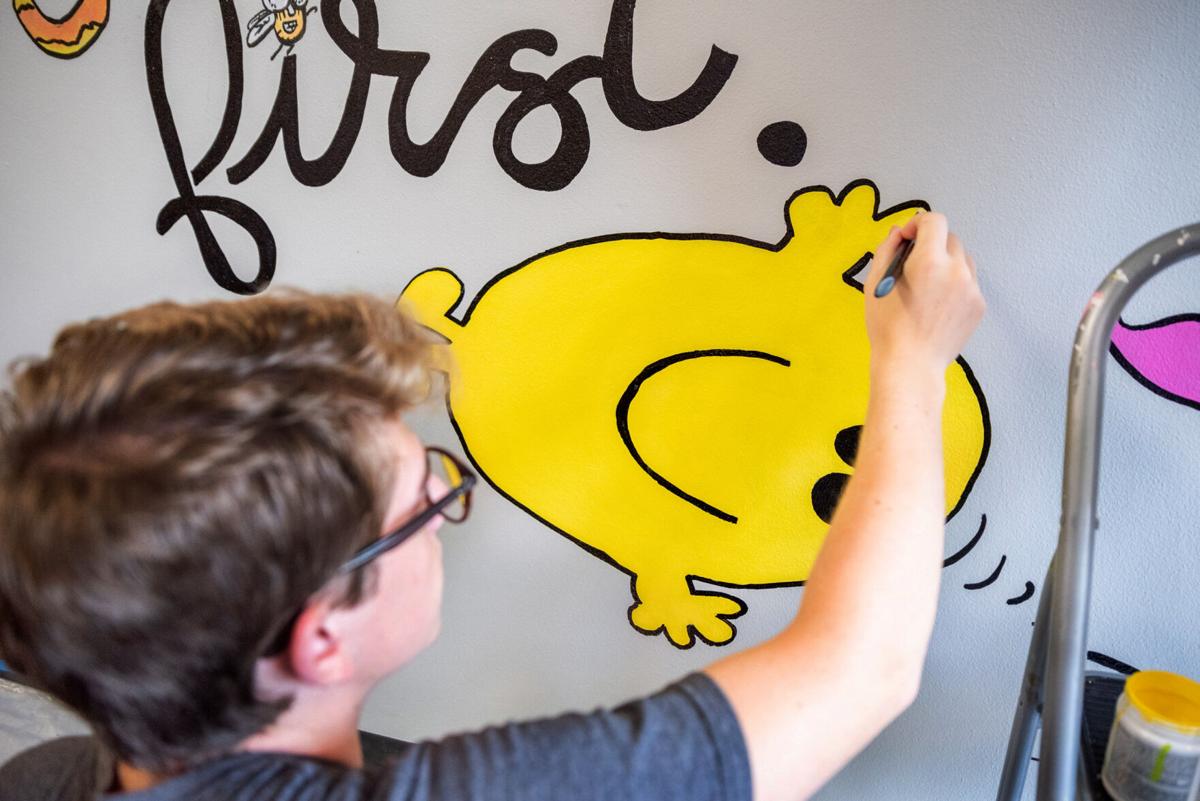 TANNER MONDOK | Herald Reegan Weekley, a junior at Hickory High School, works on a mural in a hallway at Artman Elementary School in Hermitage. 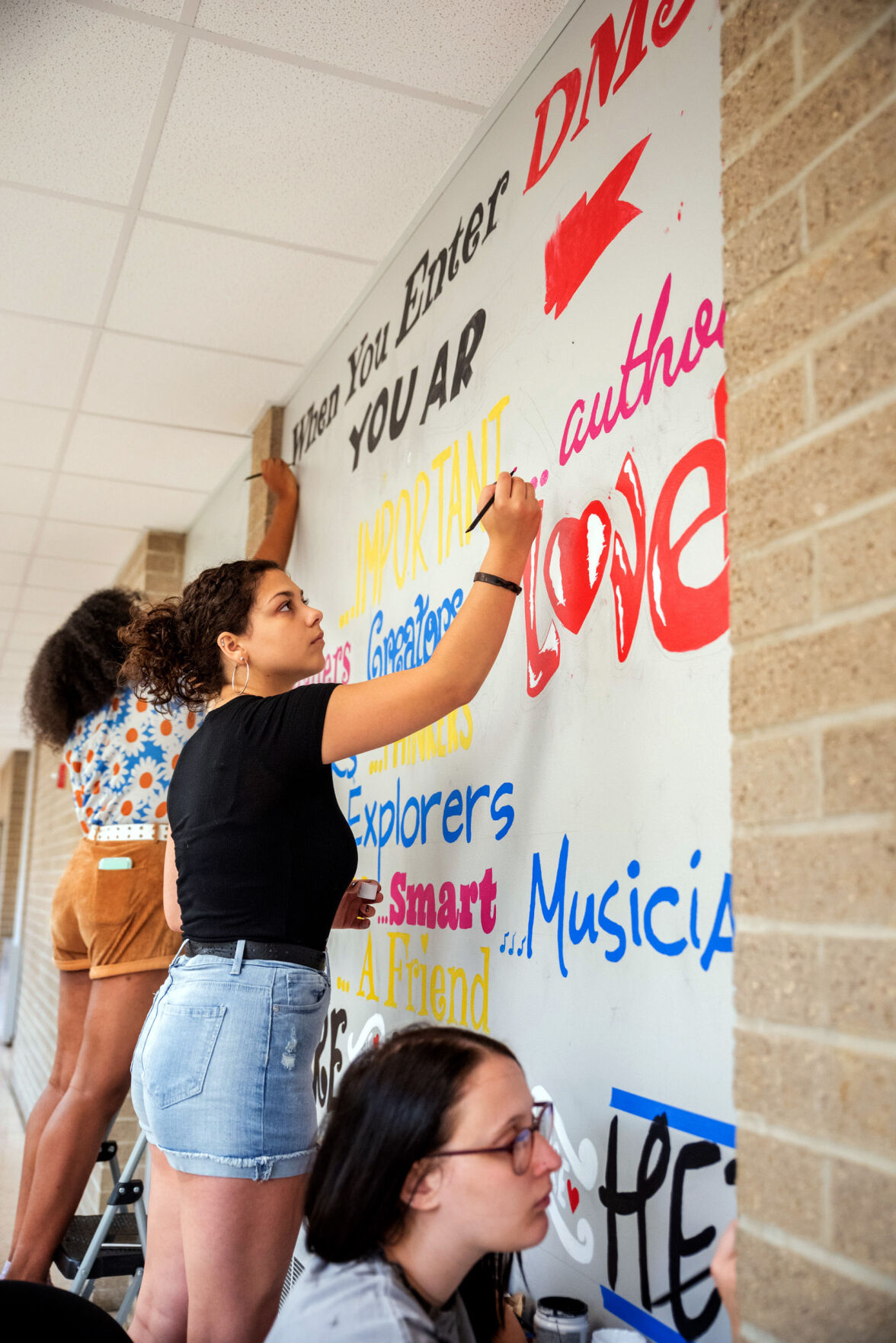 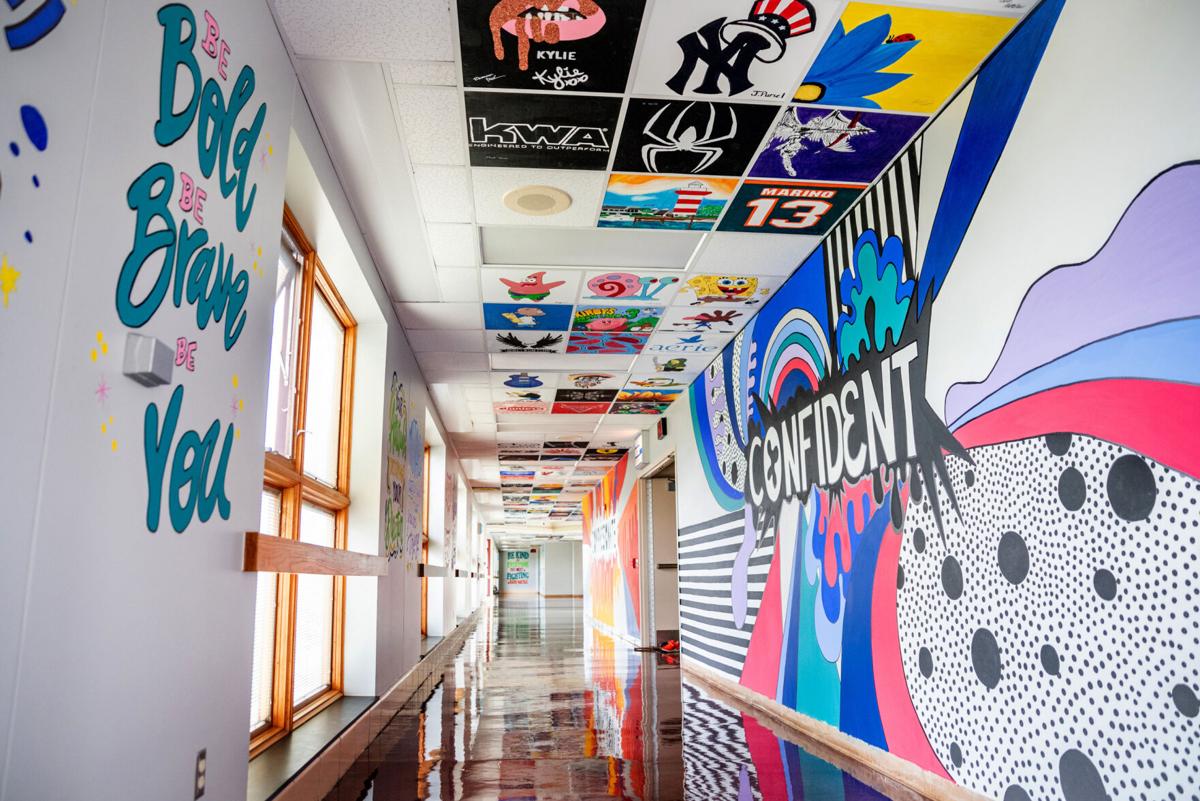 HERMITAGE — After a few days of work, the mural at Artman Elementary School is taking shape — or, rather, shapes, ranging from the bright green foliage of a tree to Snoopy sitting on his doghouse.

Other parts, such the Cheshire Cat from “Alice in Wonderland,” are still being completed.

When Hickory High School students in the school district’s summer mural painting program complete the work later this week, they’ll begin a similar painting on the opposite wall. The hallway, near the rear of the building serves as the main entrance and exit for students riding the school bus, which means the murals will get plenty of views when school resumes in the fall, art teacher Jessica Gibb said.

Among the student-artists was senior Lexi Pintar, 17, who said she’d been interested in art since eighth grade and was excited to find out about the opportunity to participate in the summer mural program.

At the same time, another group of students was at work at Delahunty Middle School under the supervision of fellow art teacher Beth Anne Black. The school’s brick construction and limited space for murals forced artists to use a different approach.

Instead of a large painting with a landscape and characters like the one at Artman, Delahunty’s mural employs inspirational quotes in bright colors with some artistic decorations, Gibb said.

Like the hallway in Artman, the mural at Delahunty is centrally located to ensure foot traffic will give students ample opportunities to enjoy the artists’ work, as the main office, gymnasium and cafeteria are all located nearby.

The students working on Delahunty’s mural included Hickory senior Brad Campbell, 17, who sometimes used a stool to help fill in words closer to the ceiling. Campbell said he hopes to pursue a career in art after graduation, and said the mural could both inspire the middle school students and encourage them to pursue their own artistic passions.

“Hopefully the kids like it, and hopefully it inspires them to do something artistic themselves,” he said.

Although this was the summer art academy’s first year, the murals at Artman and Delahunty trace their origins back to 2017, when Gibb decided she wanted to decorate the hallway near her classroom at Hickory High School.

Since the hallway includes rooms for art classes, band and theater, Gibb said she wanted something to reflect a focus on the arts. Students in her advanced art class painted colorful murals, including silhouettes of marching band members, famous musicians, and playbills of musicals performed at the high school since the 1990s.

Hickory junior Izzy Gingras, 16, was among those painting the mural Wednesday at Artman, but she has also worked on the high school mural, particularly the play bills, which she enjoyed due to her interest in theater.

However, even something as simple as painting a caterpillar can be complex, Gingras said.

“You have to know how to use colors,” Gingras said. “Something may look green, but there could be greens and yellows and blues mixed in.”

The effort at Hickory High School drew a positive response from Principal Chris Gill and Diane Brest, principal for students in grades eight to 10. They encouraged their students to create more art in the school.

One project includes the “hallway of inspiration,” where quotes adorn walls of the windowed hallway overlooking North Hermitage Road. Another mural, featuring famous figures from throughout history, lines a wall near the cafeteria.

When the projects were underway, Gibb said students often came by during their lunch periods, study halls and other free time to contribute.

Eventually, Superintendent Dr. Dan Bell suggested having the students paint murals in the school district’s other buildings, which led to the Artman and Delahunty murals becoming programs for grades nine through 12 in the school district’s summer academy program. Gibb said she worked with Principals Eric Trosch and Amy Wanchisn to develop mural ideas and select areas of the schools to paint.

The summer program helped the project run smoothly. “If we were doing it during the school year, then we’d only have a few students working at a time, and we’d have to keep taking them back and forth between the buildings,” Gibb said.

When the new school year begins this fall, Gibb said she will rotate to Artman to teach art for elementary students, while teacher Adam Darby will rotate to the high school. Though she will now teach younger children, Gibb said future high school students will have plenty of opportunities to continue expressing themselves.

“The projects we started are all complete, but there’s still a lot of open space if they want to continue anything or try something different,” Gibb said.