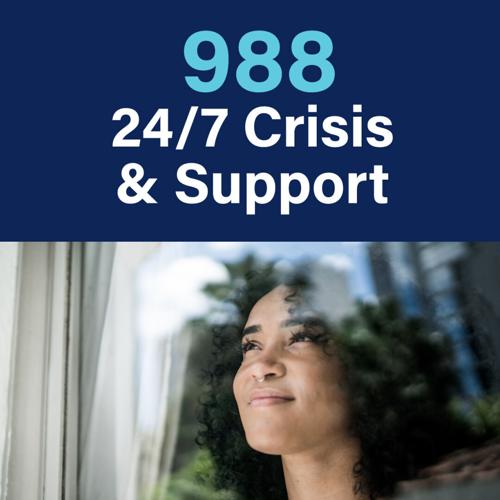 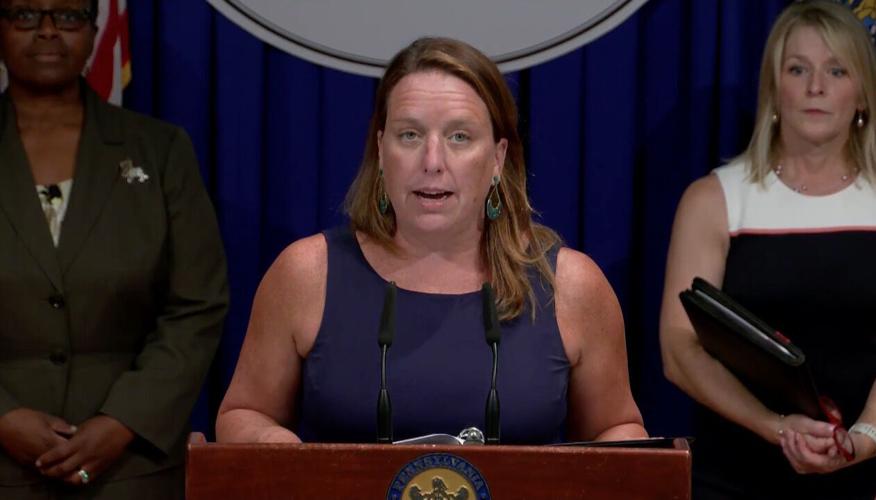 Meg Snead, acting secretary of the Pennsylvania Department of Human Services, spoke Wednesday about the rollout of the 988 Suicide & Crisis Lifeline. The new three-digit phone number went live July 16 and is an evolution of the National Suicide Prevention Lifeline.

Meg Snead, acting secretary of the Pennsylvania Department of Human Services, spoke Wednesday about the rollout of the 988 Suicide & Crisis Lifeline. The new three-digit phone number went live July 16 and is an evolution of the National Suicide Prevention Lifeline.

HARRISBURG — A new universal three-digit phone number, 9-8-8, launched nationwide to help people who are suffering a mental or behavioral health crisis or contemplating suicide — and a local official says it could help both improve accessibility and remove the stigma around mental health.

The service is available to people experiencing a crisis or a loved one concerned for the health of another.

“The changeover to the shorter, quicker to remember makes life-saving intervention and crisis support easier to reach than ever, something we know will make a difference for people in difficult circumstances,” Meg Snead, acting secretary of the Pennsylvania Department of Human Services, said during a press conference Wednesday promoting the 988 Lifeline.

Duane Piccirilli, who serves as president of the Hermitage Board of Commissioners and executive director of the Mahoning County Mental Health and Recovery Board, said having a nationwide number similar to 911 will help normalize the important of mental health.

Many people experiencing a mental health crisis may find it difficult to seek out help in the first place, which Piccirilli said made it important for people to not be afraid of asking for help.

Aside from people experiencing a crisis, Piccirilli said friends or relatives who think they know someone who is considering harming themselves can also call 988 and ask if a person’s symptoms are suicidal. Concerned people should also ask someone directly if they are considering suicide or harming themselves.

Another positive factor with 988 is coverage. Some areas in the past may not have had a local agency for people in crisis to call, while other agencies may have operated their own individual hotlines.

The various 988 centers are also all networked, so even if one 988 center is busy, a call will still be transferred to the closest 988 center.

“When someone’s in crisis, it may be difficult to remember a particular phone number or they may not have time to look up a phone number,” Piccirilli said. “This will save lives just being able to call 988.”

Piccirilli also said it was important to know when to call 988 compared to calling 911.

According to the Ohio Mental Health and Addiction Services, some examples of when to call 988 would include someone discussing harming themselves or overusing alcohol or drugs.

However, 911 should be called if there is an active suicide threat, self-injury that needs medical attention, an inability to care for oneself or an apparent overdose.

The need for such support is reflected in the nation’s suicide rate which grew by 30% from 2000 to 2020, according to the Centers for Disease Control and Prevention.

Suicide is the leading cause of death for people aged 10 to 34 years, the CDC found.

For every death by suicide, 316 people seriously consider suicide but don’t kill themselves, according to 988lifeline.org.

Counselors help callers talk through issues, a resolution for approximately 8 in 10 calls placed to the national hotline, according to a 2019 analysis cited by the Substance Abuse and Mental Health Services Administration (SAMHSA).

Callers also can be connected with local outpatient services and transportation options, or mobile crisis response units where available. When one’s safety or life is at imminent risk, call centers connect with 911 centers to dispatch local emergency services.

The Lifeline first started in 2005 and since its inception received more than 23 million calls. Call volume topped 2.4 million in 2020. That year, more than 1 in 4 calls received from Pennsylvania were redirected to the Veterans Crisis Line.

With the rollout of the new 988 number, SAMHSA’s mid-level projection forecasts volume to spike to 7.6 million calls by July 2023.

The call centers nationally have long existed through low levels of funding and staffing over the years, raising concerns about anticipated increased use.

A bipartisan effort under the Trump Administration led to 988’s creation in 2020. The Biden Administration committed $432 million to the effort including $177 million to strengthen and expand the nationwide network and infrastructure, $105 million for local call center investments and an additional $150 million included in the recently enacted bipartisan gun control legislation.

Kristen Houser, deputy secretary of the state Office of Mental Health and Substance Abuse Services, said in 2017 there were just 7 centers in Pennsylvania. The first-call answer-rate at the time fell below 30%.

However, additional centers were brought online and a regional backup system was instituted to handle calls unanswered the first time. Now, Houser said the answer-rate stands at 85%, just below the 90% benchmark the Biden Administration hopes all states achieve.

“That means we have one of the best in-state answer rates in the country,” Houser said.

When a local call in Pennsylvania isn’t initially answered within 60 seconds, it’s routed to one of the commonwealth’s three regional call centers. A national backup network is the last resort for unanswered calls.