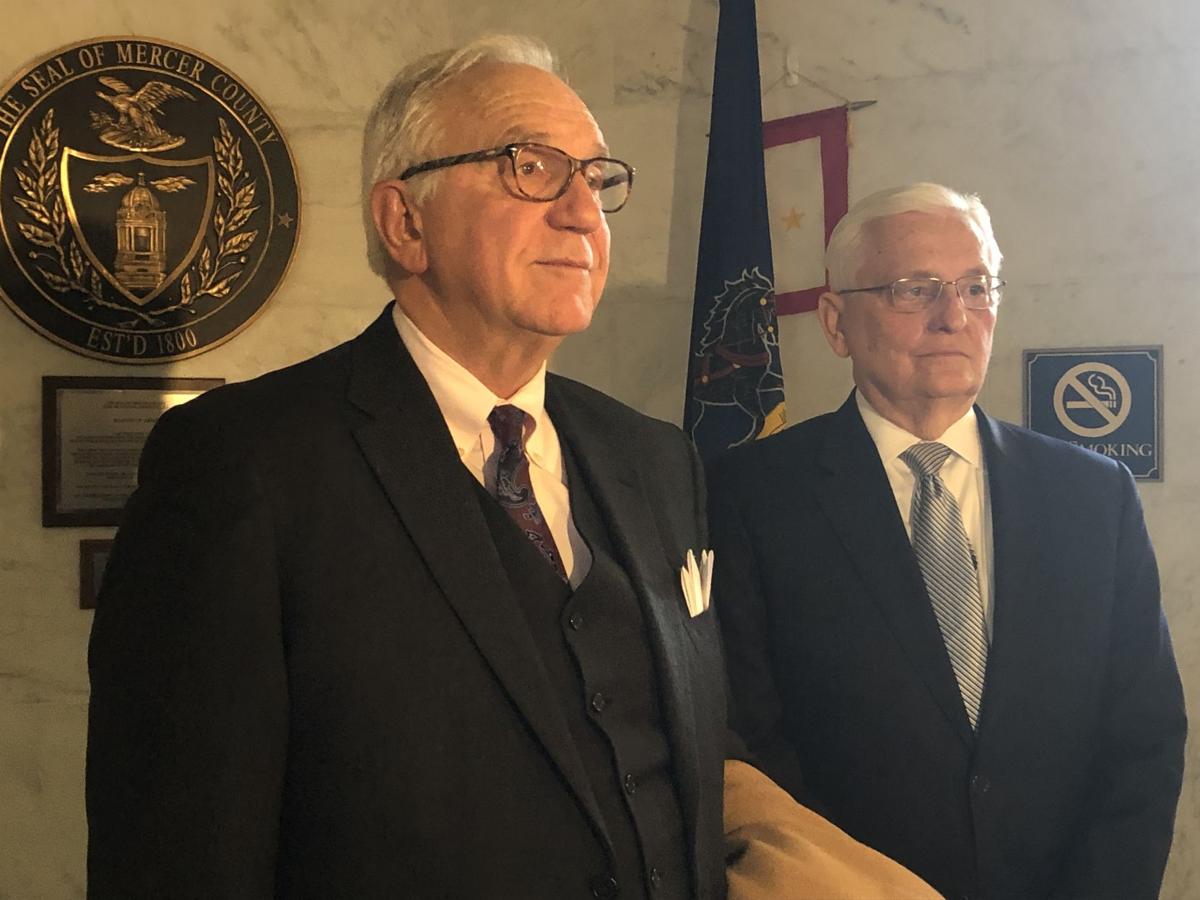 Miles K. Karson Jr. (right) with his attorney, Al Lindsay Jr., as he answered questions at a press conference following Karson's sentencing hearing Wednesday. Lindsay said they have not decided yet if they will appeal in light of Karson's probation sentence. 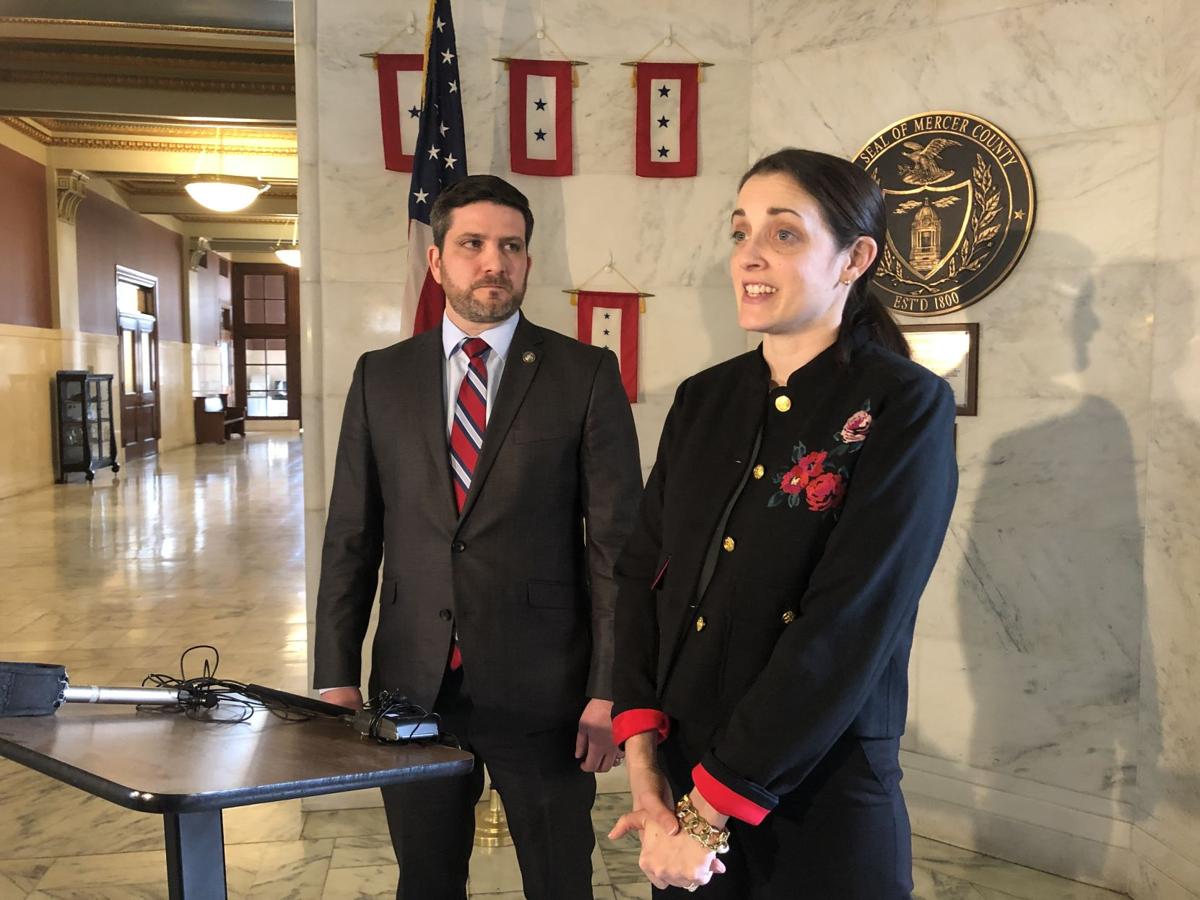 Miles K. Karson Jr. (right) with his attorney, Al Lindsay Jr., as he answered questions at a press conference following Karson's sentencing hearing Wednesday. Lindsay said they have not decided yet if they will appeal in light of Karson's probation sentence.

MERCER – The judge who sentenced Miles K. Karson Jr. Wednesday said getting remorse from the former Mercer County district attorney was "a little like pulling teeth."

"What a waste, what an embarrassment, what a mess," he said.

Karson, 73, of Sharon, who spoke at his sentencing hearing for about 45 minutes Wednesday, was originally charged by the state Office of the Attorney General in October 2017 following a presentment returned by a statewide investigating grand jury. Eleven counts of obstruction of justice and official oppression made it to the jury. Karson was found not guilty on one count of obstruction.

The attorney general’s office said Karson abused the power of his office and interfered in the carriage of justice in connection with several incidents involving a woman the commonwealth characterized as his love interest, Tonya Bulboff.

During Wednesday's hearing, Karson said he feels remorse, but he might not be showing it outwardly.

"I do want to apologize," he said.

And when the judge asked him to whom he would apologize, Karson said he has a long laundry list of people.

Senior Deputy Attorney General Kate Jordan said in her statement that Karson caused so much chaos around the courthouse that President Judge Thomas R. Dobson retired. Karson denied knowing why Dobson retired, and Karson's attorney, Al Lindsay Jr. of Butler, said it was unfair to blame his client.

Jordan disputed that Karson was truly remorseful for what he had done. She said if he was truly sorry, he would have resigned when Dobson asked him to.

"He says it was all done in the open. But it was not done in the open," Jordan said. "Never once has he accepted responsibility. What he has done is fight this all tooth and nail."

Jordan added that Karson's behavior during the trial was reprehensible – not only the two times he had to be admonished by the judge, but as he sat at the attorney's table during the trial, she heard a constant chatter, swearing and name-calling coming from the defendant.

"And he chose to make a racial slur when he knew a phone call was recorded," Jordan said, referring to an incident in which Bulboff had been arrested with a black man.

Jordan said that the phone call in which Karson made the slur was played for the jury, but redacted for the public.

"I don't think we're going to justify Mr. Karson's departure from human decency with any further comment on the use of racial slurs," Deputy Attorney General Evan Lowry said after the sentencing hearing when asked what the slur was.

Jordan asked the judge for sentencing in the "aggravating" range, which she said amounted to two to four years' prison time.

"Everyone who was prosecuted in the last few years had reason to believe they were treated unfairly," Jordan said.

The judge asked Karson for reasons why he should sentence him to probation as opposed to jail time.

Karson gave him three reasons: the fact that he is not the district attorney anymore; he has given up being a lawyer; and his medical issues.

In a Supreme Court order of March 11, Karson was to surrender his license temporarily.

"He's given up his license while his matter is under appeal – if he does appeal," Lindsay said.

Lindsay told the judge that he found it unusual that his client has taken responsibility for his actions throughout the course of events.

"He has never blamed anyone else for this mess," Lindsay said. "In that way, he's shown remorse."

The judge said his job is to balance the good with the bad.

"I believe you have led a meritorious life," the judge told Karson, referring to Karson winning medals for valor and merit during his Vietnam days. "I've weighed that against the phenomenal damage caused by your actions."

The separate sentences for obstructing justice and official oppression are to be served concurrently, with consideration for early release from the sentence with good behavior.

Lindsay said during a press conference following the hearing that they were "relieved" with the sentence.

"Mr. Karson has had a long career of serving the community in so many ways," Lindsay said. "When you're found guilty of a crime like this, you have a tendency to crawl into a shell. But I'm confident that he will continue to be a useful productive member of this community."

He said he has discussed an appeal with his client.

"I don't think a final decision has been made," Lindsay said. "There were some issues that were raised during the trial that we think are worth an appeal. In light of the court's sentence, we will take that into consideration."

A gathering of 150 clergy, family members, musicians, and well-wishers came together on Wednesday, Jan. 15, 2020 for a gospel infused homegoing celebration honoring the life of James Charles "Butch" Dobie, formerly of Wheatland, at Greater Cooper A.M.E. Zion Church in Oakland, Calif. On Jan.…