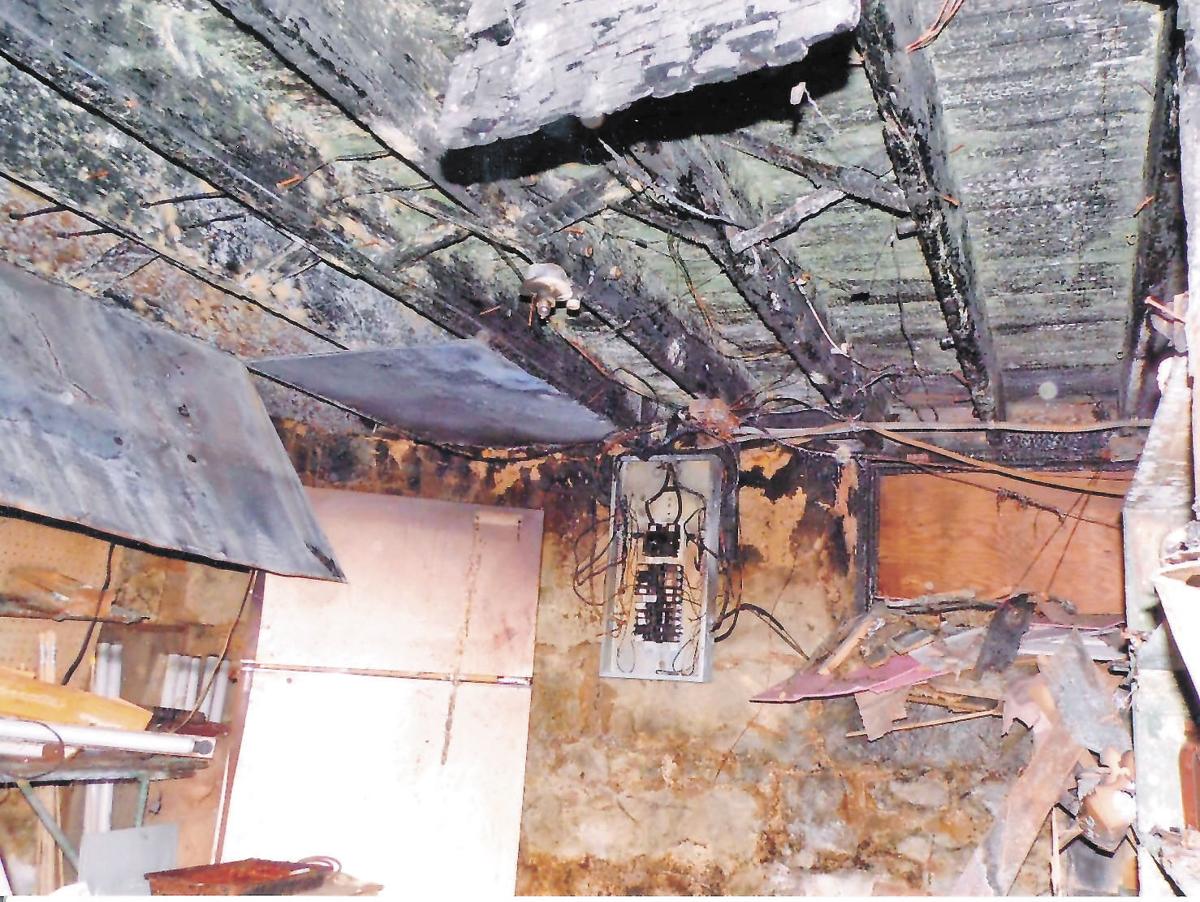 An August 2012 fire originated in the basement electrical box at the Crawford Avenue home prior to its renovation. The fire caused an estimated $5,000 in damage, police said. 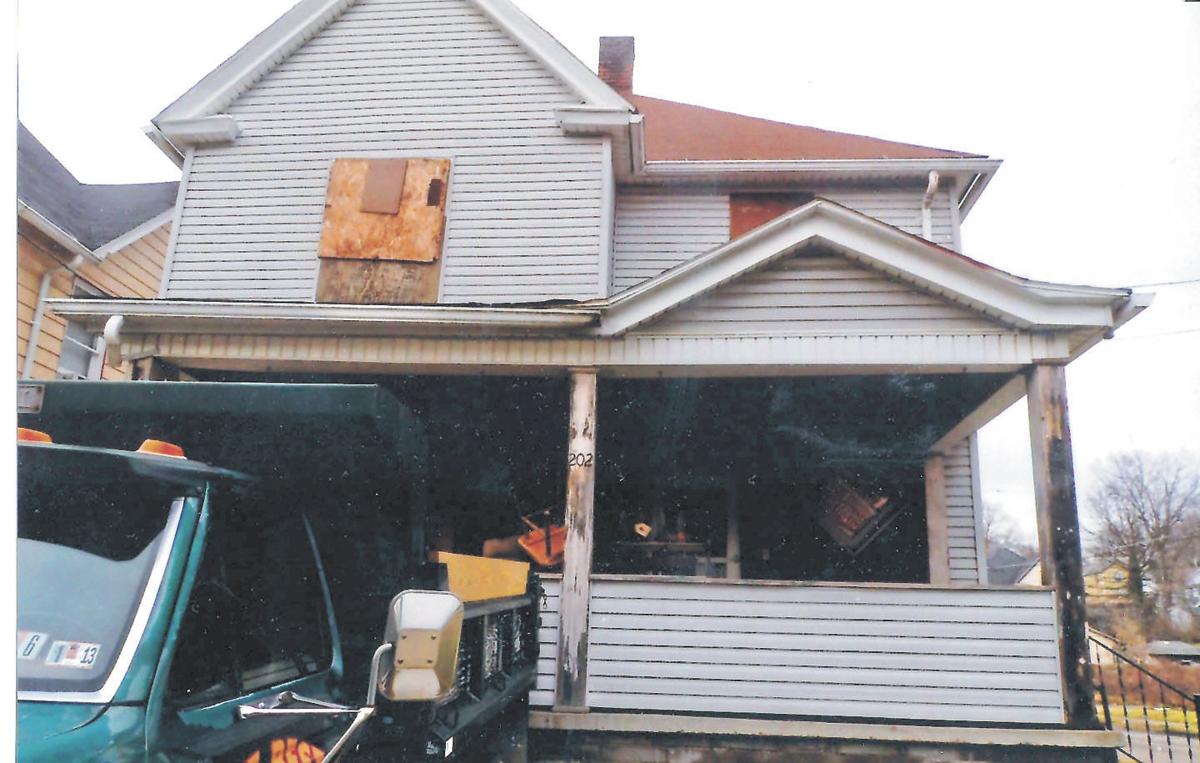 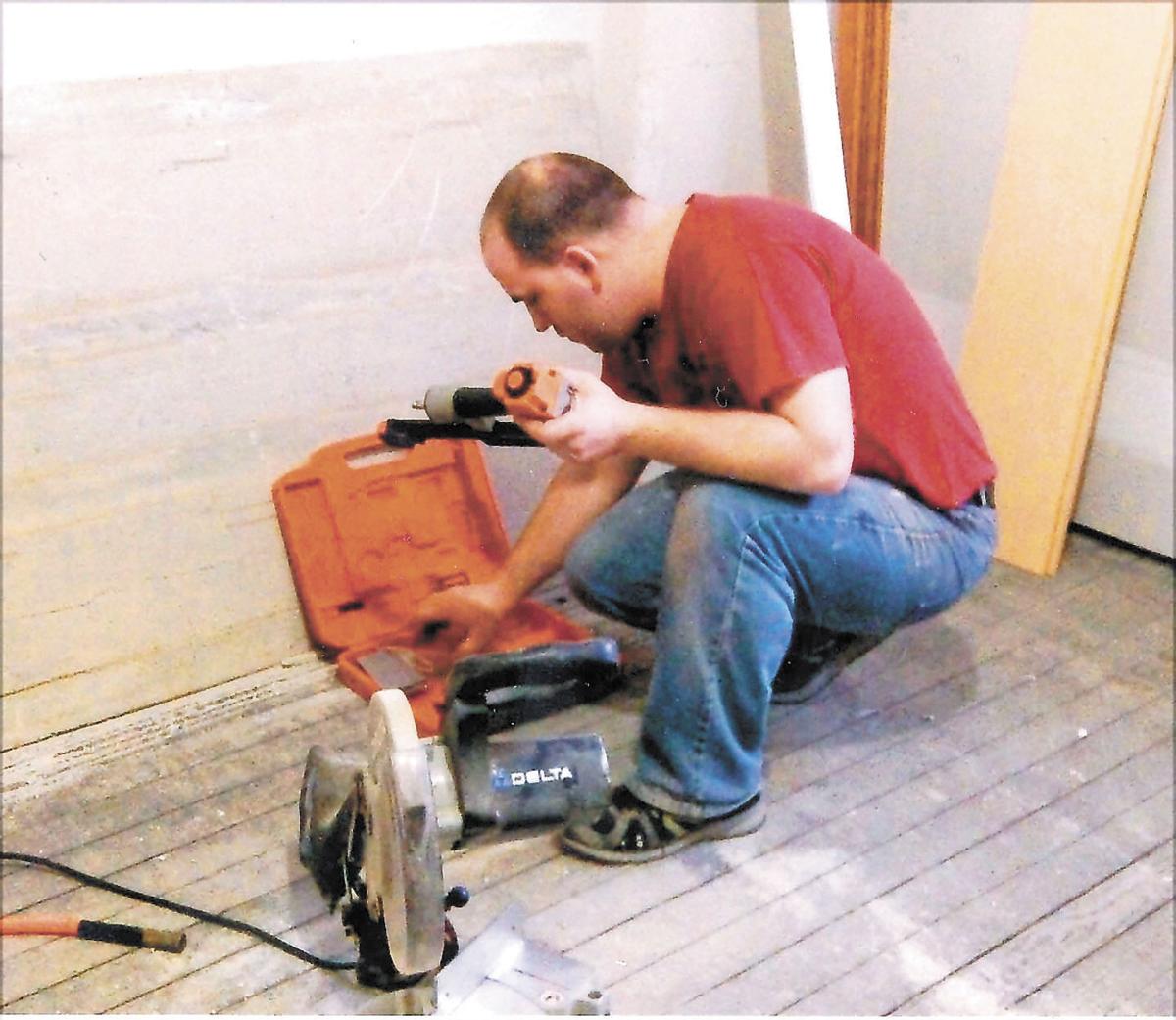 Eric Ritter works on renovating the house that he bought for just $1 in New Castle, Penn. 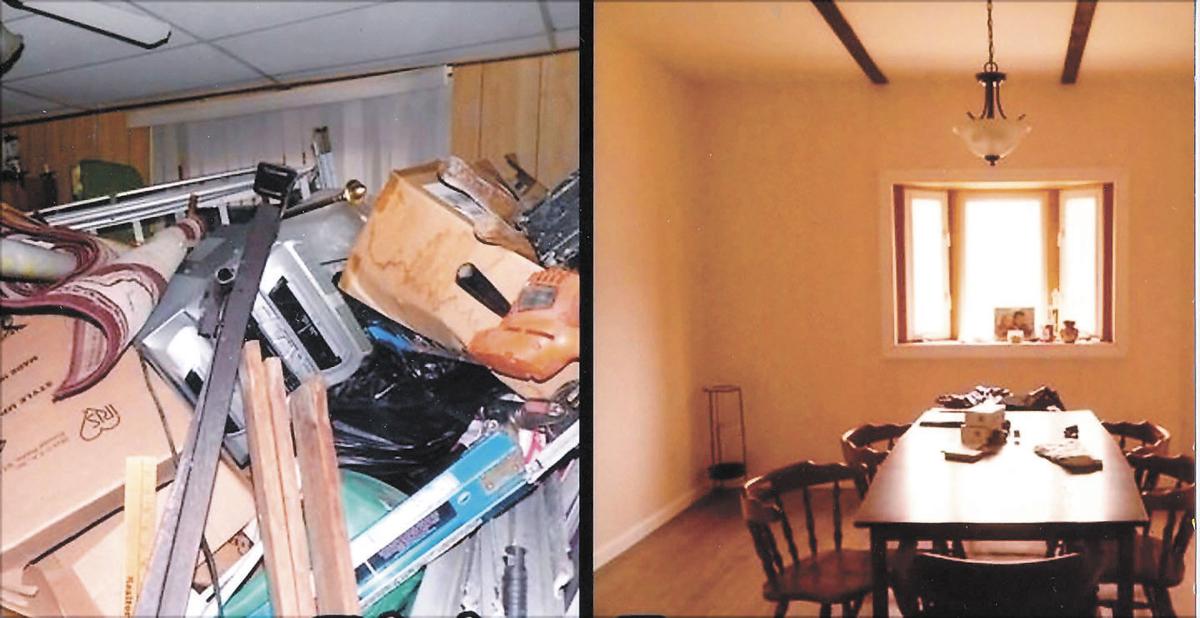 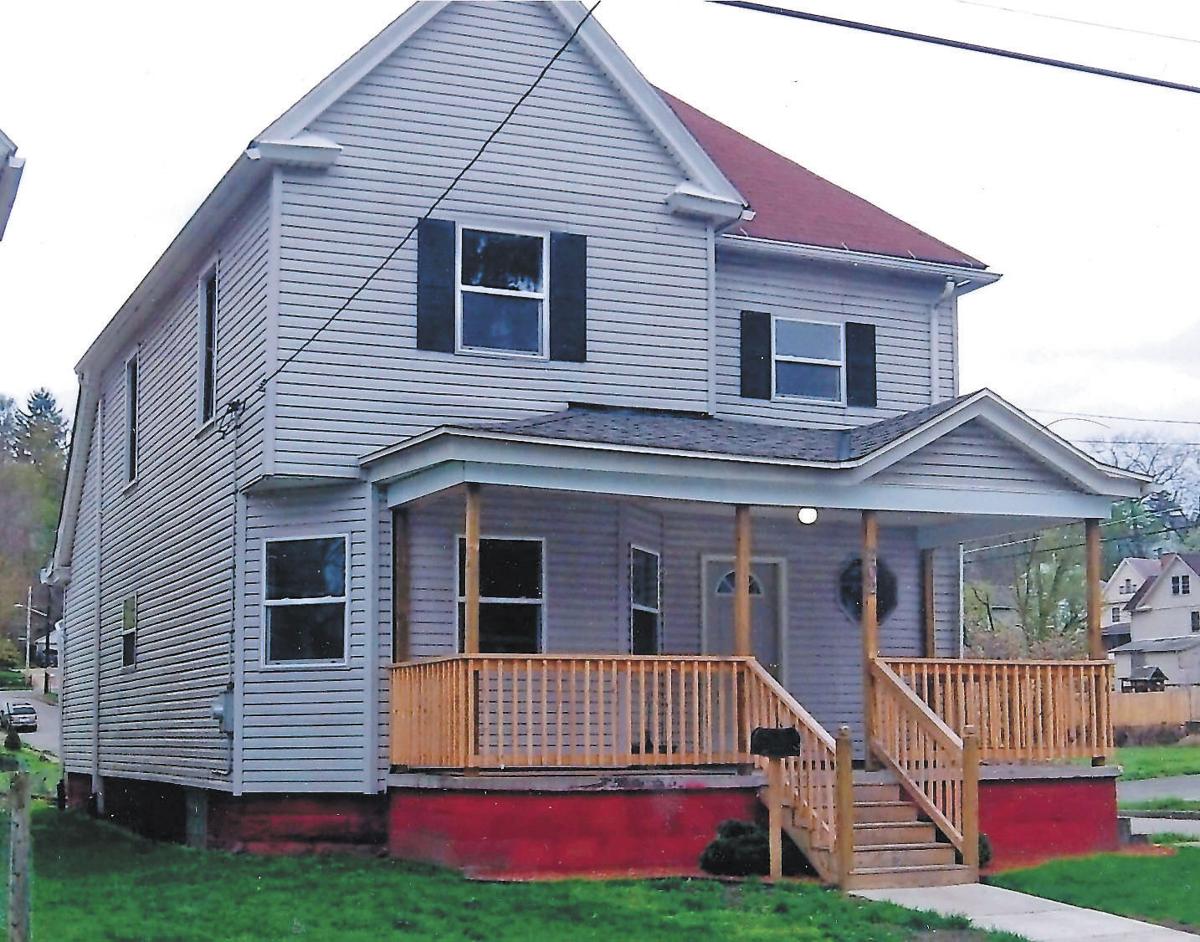 An August 2012 fire originated in the basement electrical box at the Crawford Avenue home prior to its renovation. The fire caused an estimated $5,000 in damage, police said.

Eric Ritter works on renovating the house that he bought for just $1 in New Castle, Penn.

Several houses are boarded up, their windowpanes jagged, their porch railings peeling and split.

One empty house boasts a fluorescent orange “No Trespassing” sign, though it’s clear from the house’s ramshackle condition that someone has been there.

Eric Ritter and his girlfriend Lacy Altman, who lived with Ritter’s parents in his childhood home at 204 N. Crawford Ave., decided to do something about the decaying neighborhood after the vacant house less than six feet away at 202 N. Crawford Ave. went up in flames in August 2012.

“It was scary; it was right next door to our house and our bedroom was on that side,” Altman said.

The fire, like others in the neighborhood, happened after someone broke into the house’s electrical panel, Ritter said. It was contained to the basement on the left side of the house and left an estimated $5,000 in damages, according to police.

Just months after the fire, Ritter began making a plan for the burned house that had been placed on the city’s demolition list.

He was going to make it his family’s home.

George and Terri Ritter purchased their home at 204 N. Crawford Ave. before their son, Eric, was born.

“I moved in here in 1986 and the neighborhood was decent then,” George Ritter explained. “But it’s gone from nice to downhill.”

Ritter said that in the nearly 30 years he’s lived there, he’s seen the homes fall into decline after elderly owners died and renters took up the residences.

“A lot of people sold the houses very cheaply to get out from under them and then the renters didn’t take care of the homes,” he said. “Then the houses were a disaster, and so they sit and no one pays taxes on them.”

The city has torn down a number of homes in the neighborhood, Eric Ritter said, but it has been plagued with problems linked to drug use and domestic violence.

So in December 2012, Eric Ritter approached Bill Wansettler, the owner of 202 N. Crawford Ave., and asked to purchase it. Wansettler agreed to sell the home, which he had used primarily for storage, for just $1.

“I felt by doing this, it’d be one less empty lot, one less house where high grass won’t grow, another place that won’t be empty,” Ritter said. “I wanted to do a good thing for the community.”

While Ritter knew the vacant home was filled with junk since firefighters had struggled to get in it to extinguish the fire, he didn’t quite know how bad it was.

When the pair walked into their new home for the first time, they were shocked.

“I said to Eric, ‘Why would he bring all this junk in here?’” It was up to the ceiling. We couldn’t walk past the entryway.” Altman said.

Before the couple could even begin renovations, they had to haul out load upon load of broken electronics, old toys, destroyed furniture and piles of other trash with the help of other family members over several months.

In fact, Ritter said, one of the biggest costs for the renovation was trash containers, as he spent more than $4,000 on them.

“I had them in the front on the street; I had them in the back. They were everywhere,” Ritter said, shaking his head. “It got to be that I’d call Aiken (Refuse), and all I’d have to say is that I was on Crawford Avenue and they’d say, ‘We know where you are.’ ”

TROUBLES ALONG THE WAY

By December 2013, the couple was able to start demo work on the house, which Ritter believes was built in the late 1800s. They tore it down to its bare bones, pulling out floor boards, plaster, plumbing and wiring.

Working in an unheated house in the middle of winter, Altman wasn’t sure she was up for such a big project.

“She wanted to quit then,” Ritter said, “but if we wouldn’t have done the work, we would’ve been stuck with it. So we kept at it.”

Altman admits it was hard, and that at times, they struggled through the renovation work.

“There were times I’d cry or we’d get into a fight over it,” she said.“After a while it got tiring,” agreed Ritter. “We’d finish mudding the drywall in one room, and I’d think, ‘We’ve got seven more rooms to do.’ ”

While they worked on the house, the couple encountered a number of problems including bee hives in two different walls and a raccoon living in the ceiling of the porch roof. The Ritters also realized the wiring in the kitchen was a safety hazard, as most of the wires were spliced or taped together.

The couple also had a break-in during the renovation phase. While nothing was stolen, Ritter said he was forced to replace the basement door. The break-in set him on edge.

“I worried every night until we actually moved into the house,” he said. “I’d hear a car door, and I’d jump or I’d call the cops.”

Ritter said while originally he expected the project to take about a year, it actually took closer to two years because they did all the work themselves during evenings and weekends with Eric Ritter regularly bringing materials home from his job at Carter Lumber, whether it was stacks of drywall, windows, or siding.

“They really worked day and night,” George Ritter said. “After the kids went to bed, they’d go over there and work ’til 2 or 3 in the morning and all weekend, too.”

“We’ve done every single room,” Ritter said, motioning to his scarlet-walled living room and sunny marigold-colored playroom. “It was hard to picture in your head what it was all going to look like, but we kept trying things out. It was a work of heart to get it the way we wanted it.”

The couple was thrilled when they finally moved into their renovated home in November last year, just in time to put up a Christmas tree for their children.

“The kids are very happy to have their own rooms and a playroom,” Altman said, pointing to the bubble gum pink room for their daughter Aubrey, 2, and the neon green room for their son Noah, 7. “There’s plenty of space for them to play in.”

Ritter added: “It feels good to have it done and to have it the way we wanted it. I’m not rich, and I didn’t get a loan to do this.

“I’m 26 and she’s 29,” he continued, referring to Altman. “I’ve got no mortgage. Who that age doesn’t have a mortgage payment?”

“Everyone in the neighborhood loves it,” Ritter said, his pride evident in his smile. “We always had people driving by, telling us that we were doing a good job.”

WASHINGTON (AP) — A person in California who had been vaccinated against COVID-19 became the first in the U.S. to have an identified case of the omicron variant, the White House announced Wednesday as scientists continue to study the risks posed by the new virus strain.

NEW YORK (AP) — A woman testified on Tuesday that British socialite Ghislaine Maxwell was often in the room when the witness, then just 14, had sexual interactions with the financier Jeffrey Epstein.

One day after reporting dropping numbers, Mercer County and Pennsylvania reported some of their highest single-day case counts of the current surge.

Partly cloudy in the evening with more clouds for later at night. Low 28F. Winds light and variable.