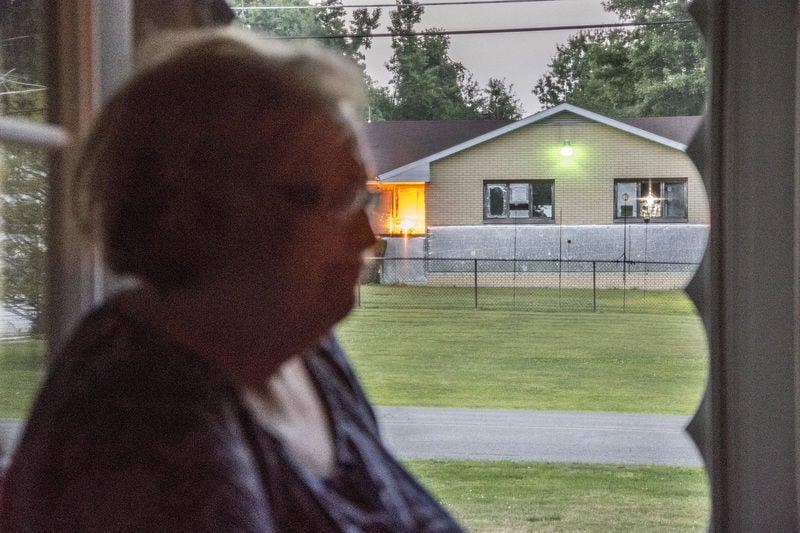 Nancy Raich stands in her house near a front door illuminated by the many spotlights her neighbor Arthur Brown has shining in the direction of her house. 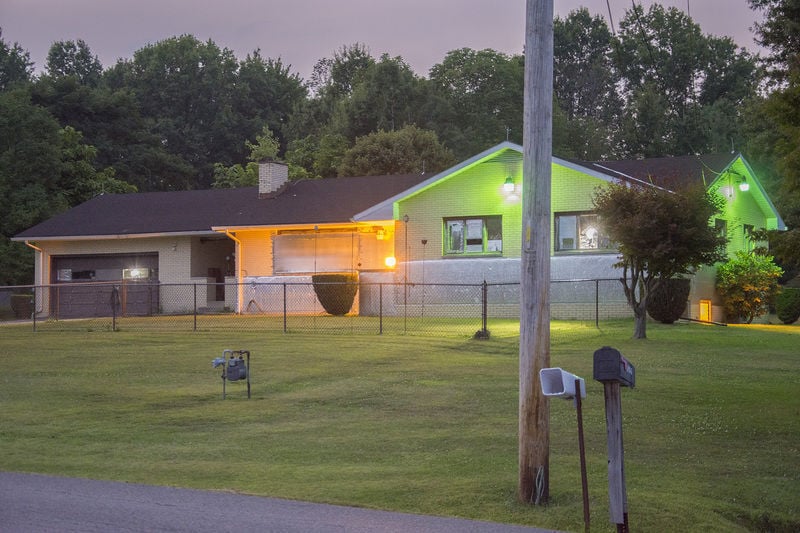 Nancy Raich says the spotlights on her neighbor Arthur Brown’s house on Virginia Road, Hermitage, have kept potential homebuyers from visiting her property more than once.

Nancy Raich stands in her house near a front door illuminated by the many spotlights her neighbor Arthur Brown has shining in the direction of her house.

Nancy Raich says the spotlights on her neighbor Arthur Brown’s house on Virginia Road, Hermitage, have kept potential homebuyers from visiting her property more than once.

HERMITAGE, Pa. – The excessive number of unusually bright outdoor lights 78-year-old Arthur Brown installed on his property has thus far managed to keep the aliens away. But they're drawing complaints from his neighbors—and fines from the city–like moths to a flame.

At least one neighbors says they're actually keeping her from selling her house.

“I’ve had a lot of nice couples come and look at my house,” said Nancy Raich, 71, who lives across the street from Brown. “You can’t get a second look until that’s cleaned up.”

Raich said that Brown, who some refer to to as “the alien light guy on Virginia Road”, has posted spotlights around his house for years. Raich said Brown believes the lights defend his house from aliens.

“Little by little, we learned that he thought we were ‘they,’ and that we are the ones the aliens were contacting to get to him,” Raich said.

That belief has strained what Raich said was once a neighborly friendship. Raich said she even looked after Brown for a while – cleaning and shopping for him and helping him pay his bills – after he had a serious medical issue.

Because of Brown’s lights, she said she has to keep her shutters closed tight at night or the lights will reflect off her picture glass and mirrors and light up the entire interior of her house, making it difficult to watch TV.

“I haven’t had to put on an outside light for years,” Raich said.

Brown also has wrapped part of his house in foil – another defense against aliens, she said – which reflects more light off his property.

As a result of Brown’s unorthodox beliefs and sci-fi security upgrades, he is a victim of pranksters, which Raich said also lesses the neighborhood's desirability.

One night, five girls climbed Brown’s fence and threw things at his house, Raich said. Frequently, people stop in front of the house and honk their horns and yell at the house, she said. When the police come, Raich said Brown's harassers occasionally veer into her yard while making their getaway.

Raich said she, her husband and their neighbors have called 911 numerous times over the years to report actions by Brown or aimed at him by others. Now that she has lost her husband and wants to sell her house, she said she's had and has demanded the city act.

“He’s holding all my cards for my life,” Raich said, teary-eyed.

The city has had to stop Brown before. In 2002, police cited him with disorderly conduct and harassment. Although the case ultimately was withdrawn, Brown was ordered to undergo a psychiatric evaluation and surrender firearms.

The police charged Brown with much more serious offenses in 2009, after they say he fired a BB gun into the cars of teenagers harassing him. Prosecutors dropped the charges after Brown agreed to pay $2,109 restitution. The court again noted there were “mental issues” at play.

In its latest effort, the city has used zoning regulations to prosecute Brown. An enforcement notice in February said Brown “has several spotlights located throughout his property which are directing objectionable direct and reflected glare on adjoining properties.”

When Brown didn't respond to the letter, the city cited him. He did not appear at a hearing was found guilty, and fined $500 plus court costs.

In addition, District Judge Ronald E. Antos ordered that, if Brown did not “extinguish” the lights, he would be fined $500 a day. He now owes more than $20,000, the city said.

Raich said she feels sorry for Brown, who apparently has no close relatives, noting that he lives alone and has mental health issues.

But when it comes to his behavior, she's lost her sense of humor.