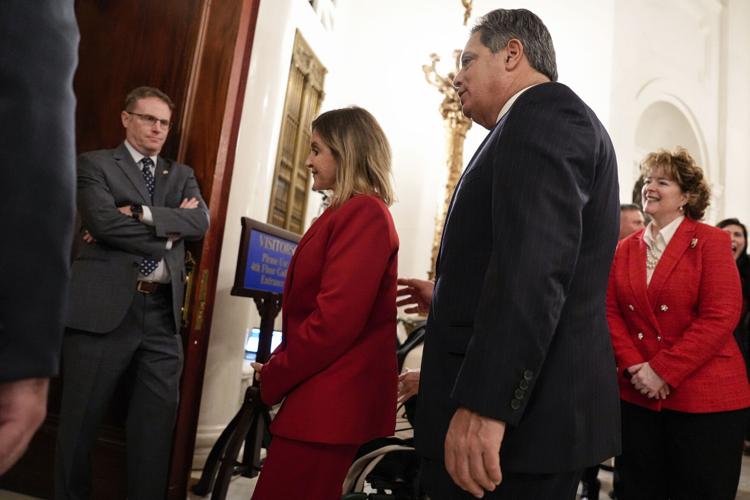 HARRISBURG — Pennsylvania House Democrats entered Tuesday with a slim functional minority and ended the first day of the new legislative session by electing one of their own as the speaker of the house.

However, the new speaker, Berks County Democratic Rep. Mark Rozzi – voted into the role with the necessary support of 16 Republican members – declared on the House floor that he will govern as an independent.

Rep. Carl Metzgar, R-Somerset, was the other finalist for speaker.

“While there has been a lot of discussions about making history with (Tuesday’s) vote, I do not want to disappoint. The Commonwealth that is home to Independence Hall will now be home to this Commonwealth’s first independent speaker of the House,” Rozzi said immediately following his election.

“I pledge to caucus with neither the Republicans nor the Democrats,” he said. “My staff will be made up of people from both parties. I pledge my allegiance and my loyalty to no interest in this building, to no interest in our politics. I pledge my loyalty to the people of the Commonwealth. The people who are tired of the hyper-partisanship from both parties.”

Rozzi’s announcement made many wonder whether he was formally leaving the Democratic Party and registering as an independent. A Tuesday night press conference did not add any clarity. He noted that he was elected as a Democrat but reinforced he “did not intend” to caucus with either party.

“This is consistent with the practice of most speakers. The speakership is a nonpartisan officer of the House entrusted with maintaining the integrity of the House. That will be my focus as speaker,” Rozzi said at a brief press conference.

He took no questions from the press while at the podium and did not immediately respond to a text message seeking clarification about his party affiliation.

Immediately following the late presser, House Republican leadership issued a press release congratulating Rozzi and reinforcing the representative’s own words as being Pennsylvania’s “first Independent speaker of the House.” The Republicans’ release expressly identified Rozzi as an “Independent.”

Rozzi received 115 votes, and Metzgar received 85 votes. There were 200 members seated Tuesday with vacancies in three other districts.

Republicans currently hold a 101-99 voting majority. Democrats won 102 seats in the November midterm elections, enough for a one-seat majority with the House at full complement.

The three ensuing vacancies caused the party to slide into the minority at the outset of this new 2023-24 Legislative Session. A court dispute continues over special election dates to fill those vacancies.

While the House was at ease, the state Senate moved forward with its own swearing-in ceremony. Sen. Kim Ward, R-Westmoreland, saw the interim tag removed as she was elected as the upper chamber’s leader, senate president pro tempore. She is the first woman to hold the position.

The Senate further conducted business as the House was in wait. Eventually, the two bodies joined in the House chamber to conduct a joint session to certify election returns recognizing the victory of Josh Shapiro and Austin Davis — Davis resigned from the House as a result of the outcome, creating one vacancy — as governor and lieutenant governor, respectively. That got a standing ovation from about half of the lawmakers in attendance.

The full Legislature chose a director of the Legislative Reference Bureau. And, then it recessed. Senators moved back to their chamber to finish their day’s business.

The House? It returned about 3:55 p.m. with the unprecedented speaker election.

“We must have a speaker that reflects the realities that we have here before us,” Gregory said, a nod to the thin majority. He later added that the House majority could potentially shift more than once this year with three special elections and a fourth vacancy, Republican Rep. Lynda Schlegel Culver’s seat in Montour and Northumberland counties, on the verge.

Culver is her party’s nominee for the vacant seat in the state Senate’s 27th District, which was vacated by former state senator John Gordner who now works as counsel with Senate leader Ward.