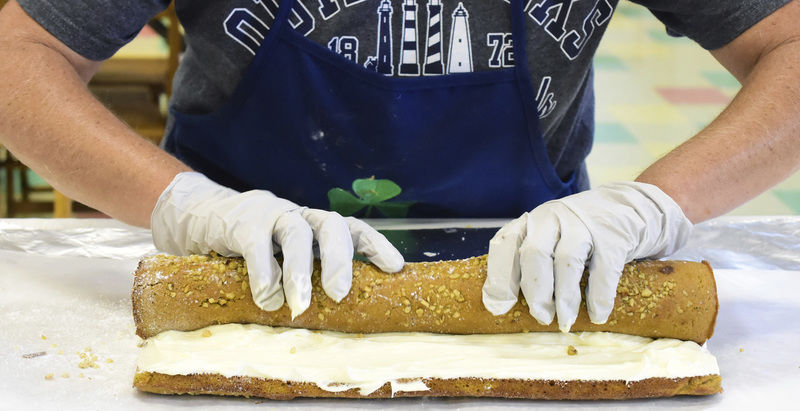 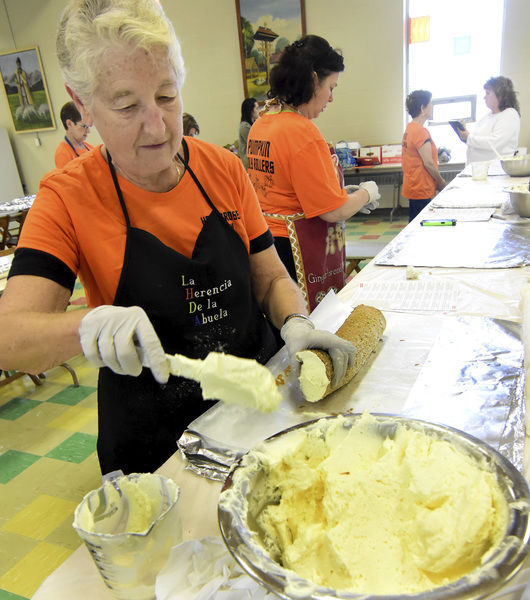 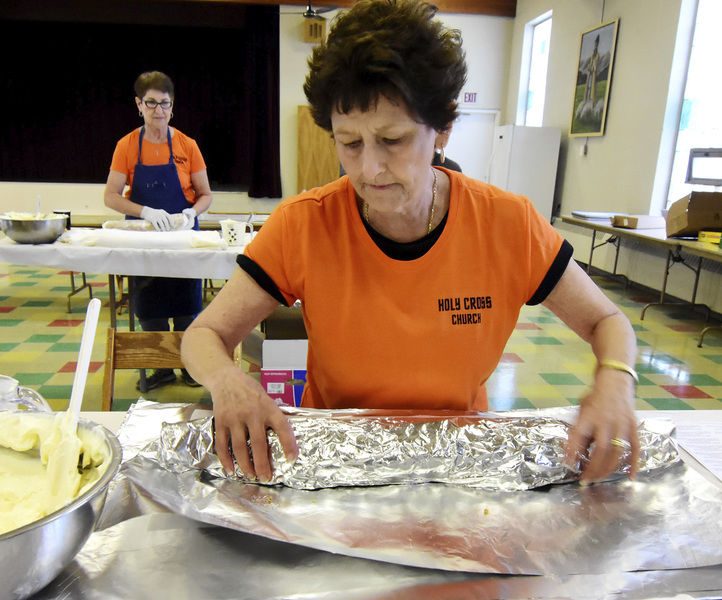 Adela Price, longtime president of the Holy Cross Ladies Aide Society, finishes her work on a pumpkin roll. Mary Ann Kauffman tackles work of her own in the background.DAVID E. DALE | Herald 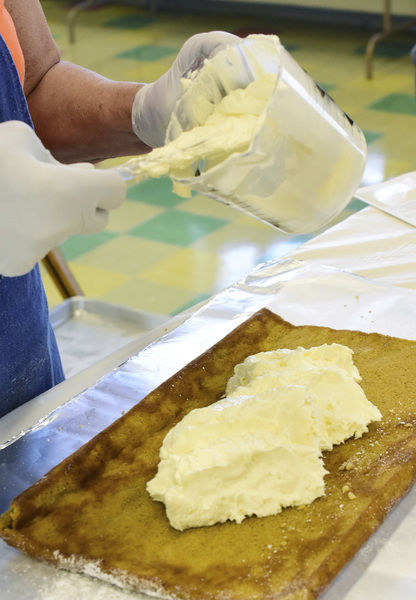 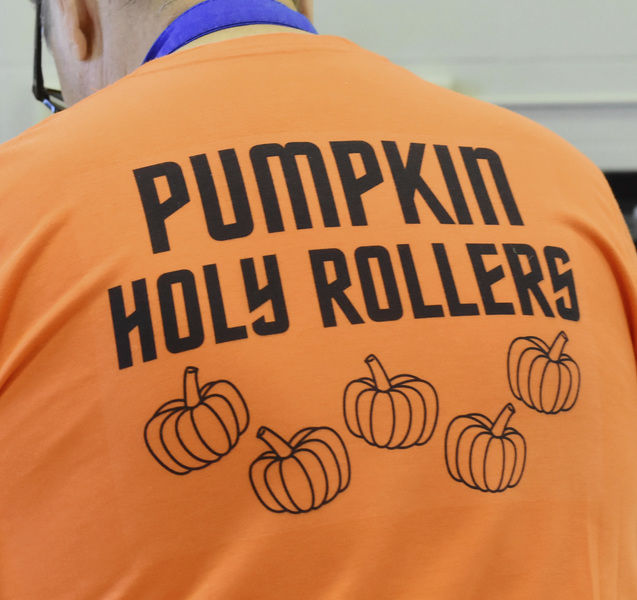 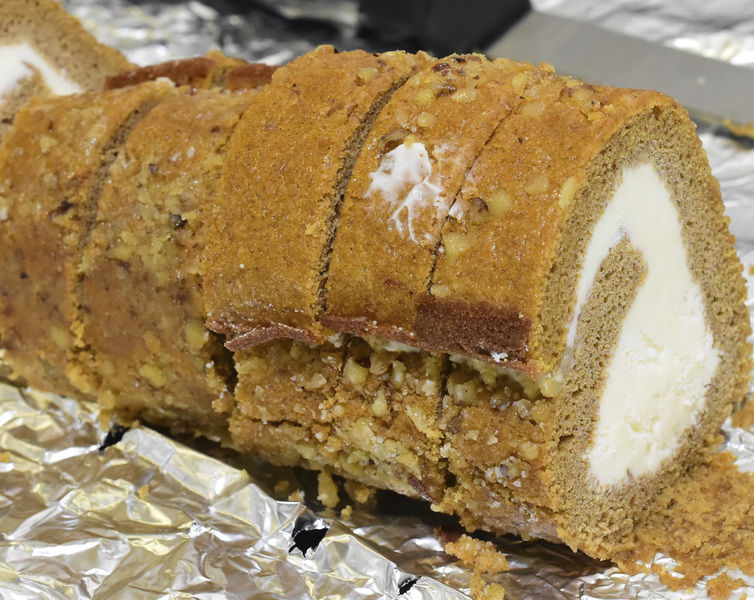 DAVID E. DALE | HeraldVolunteers at Holy Cross Orthodox Church on Maple Road make and sell pumpkin rolls as part of a fundraiser for the church. 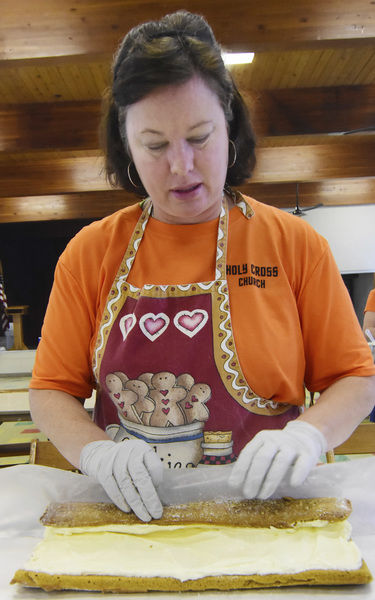 Adela Price, longtime president of the Holy Cross Ladies Aide Society, finishes her work on a pumpkin roll. Mary Ann Kauffman tackles work of her own in the background.DAVID E. DALE | Herald

DAVID E. DALE | HeraldVolunteers at Holy Cross Orthodox Church on Maple Road make and sell pumpkin rolls as part of a fundraiser for the church.

HERMITAGE – It’s almost too picturesque to be real. A beautiful old church, nestled among trees bursting in shades of orange and crimson, the sun shining bright and the cozy, welcoming scent of ginger and nutmeg, wafting out the door.

Fall is here and so are the Pumpkin Holy Rollers, a dedicated group of volunteers at Holy Cross Orthodox Church on Maple Road, where they chop, stir, whip, fold and bake up arguably one of the best pumpkin rolls around.

The 20 or so old friends, all long retired from some other occupation, gather at the church shortly before 9 a.m. on Wednesdays. Everybody knows their task and likes their particular task, be it making the batter for the pumpkin cake that’s formed into rolls or whipping together the cream cheese filling. The actual rolling and filling are just slightly less popular jobs, said Adela Price, the longtime president of the Holy Cross Ladies Aide Society.

Tiny and quick, Price stands at her station, closest to the door inside the church’s social hall, where she can hustle from frosting a roll to greeting a customer and filling an order. Many, if not most, of the customers are repeats, she said. She recognizes most of them, who come asking for at least two rolls, one with walnuts, one without.

“A couple of doctors get them for their staff every fall. And some of the hotels order them and even some of the local high schools,” Price said.

The idea to make pumpkin rolls started back in 1995, by Rae Trombibtas, who has since passed away. Her husband, David, still works the industrial-sized mixer, handling 50-pound bags of powdered sugar, working in just the right amount of cream cheese and butter to make a delicious creamy filling.

Plans were to do it for just one year, just as a fundraiser for the church. But it was such a success, Price said, they’ve kept going. Like a precision dance team, each volunteer arrives and gets right to the task. Some start on the batter, while heating up the aging convection oven that houses 10 trays at a time. Others drape cotton towels along long tables, waiting to catch the freshly baked pumpkin rolls and giving them the first roll, while they’re piping hot.

The early risers, those who get to the church before 8:30 a.m., get the jellyroll pans greased and lined with wax paper. Earlier in the summer, Mary and Ray Sankey have come in and cut to fit thousands of sheets of wax paper and aluminum foil. One of the long-time pan greasers is Ellen Moga, who is 89. She sits with Pete Costar, Violet Kaibas and Helen Szakach.

The original recipe, more like a list of ingredients, is taped inside a cabinet door. Nobody looks at it anymore. It starts with a dozen eggs and several cups of sugar and spices. Boxes of eggs are purchased weekly, 30 dozen at a time, Price said.

“Hey, grab an apron and head on into the kitchen,” said John Phillips, once a Sharon Tube worker, now head cook.

They will crank out 2,000 rolls by the time the season ends in mid-November. At $13 each, the rolls are the primary fundraiser for the church, bringing in between $15,000 and $20,000. The money goes to keep the church in good condition, said Price.

Rolls that aren’t sold fresh are tucked away in one of the church’s three freezers. They’ll keep for at least a year, she said.

Price can’t recall any real problems in all the time the group has been baking – though she admits she was a little worried this week when none of the ingredients were delivered by Tuesday. Or Wednesday.

“They showed up about noon. Normally we start at 9 in the morning on Wednesday,” she said.

The group has no plans to stop making the pumpkin rolls or to add any other desserts, she said.

SURFSIDE, Fla. (AP) — A wing of a 12-story beachfront condo building collapsed with a roar in a town outside Miami early Thursday, killing at least one person and trapping residents in rubble and twisted metal. Rescuers pulled dozens of survivors from the tower during the morning and continu…

Nearly all COVID deaths in US are now among unvaccinated

Nearly all COVID-19 deaths in the U.S. now are in people who weren’t vaccinated, a staggering demonstration of how effective the shots have been and an indication that deaths per day — now down to under 300 — could be practically zero if everyone eligible got the vaccine.

Spears: 'I deserve to have a life'

LOS ANGELES (AP) — After 13 years of near silence in the conservatorship that controls her life and money, Britney Spears passionately told a judge Wednesday that she wants to end the “abusive” case that has made her feel demoralized and enslaved.

GOP blocks 'For the People Act'

WASHINGTON — The Democrats' sweeping attempt to rewrite U.S. election and voting law stalled in the Senate Tuesday, blocked by a wall of Republican opposition to what would have been the largest overhaul of the electoral system in a generation.

Widely scattered showers or a thunderstorm early. Then partly cloudy. Low near 70F. Winds light and variable. Chance of rain 30%.

Partly cloudy in the evening followed by scattered thunderstorms after midnight. Low 69F. Winds light and variable. Chance of rain 40%.