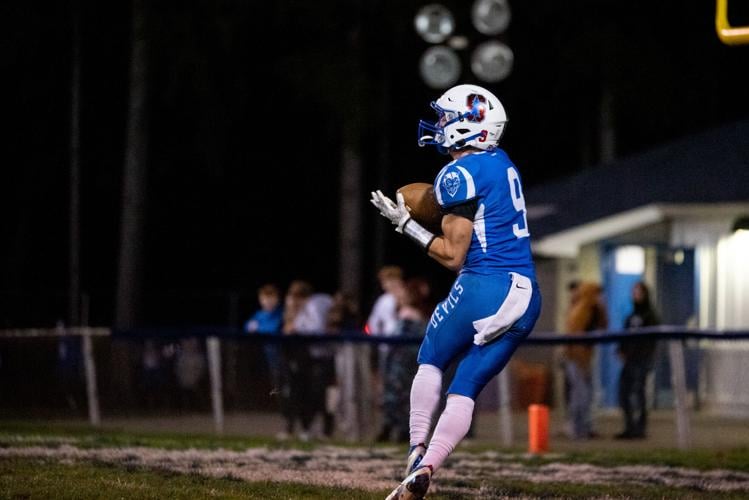 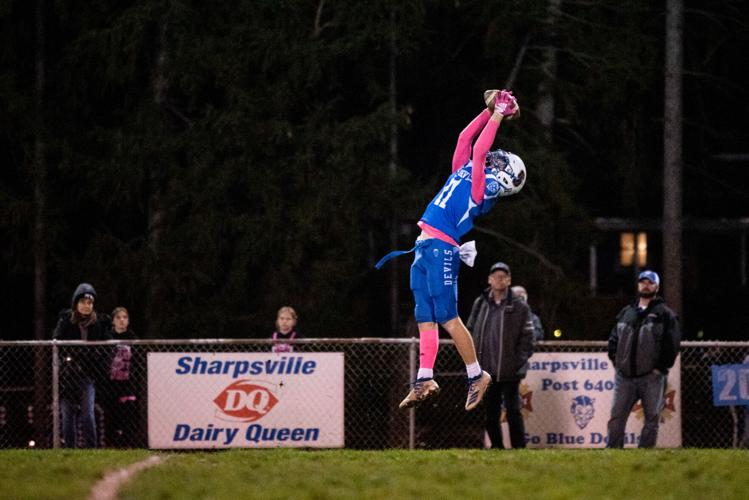 Sharpsville’s Dalton Byerly leaps to catch a pass against LeBoeuf. 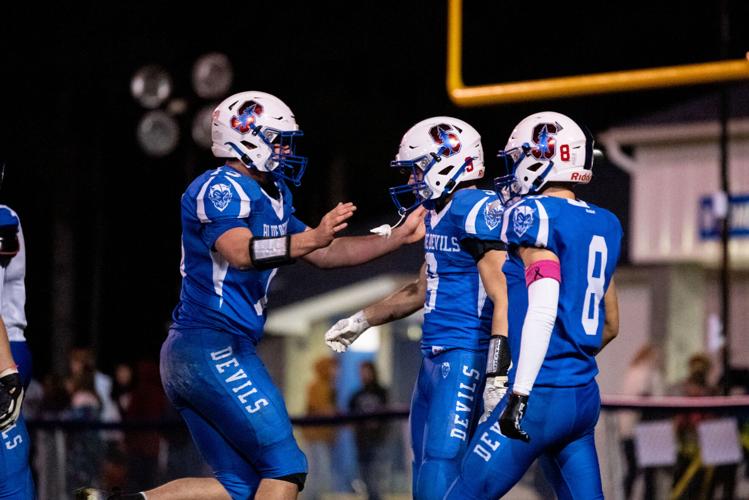 Sharpsville’s Garen Levis, center, celebrates with teammates after scoring a touchdown against Fort LeBoeuf on Friday at McCracken Field. 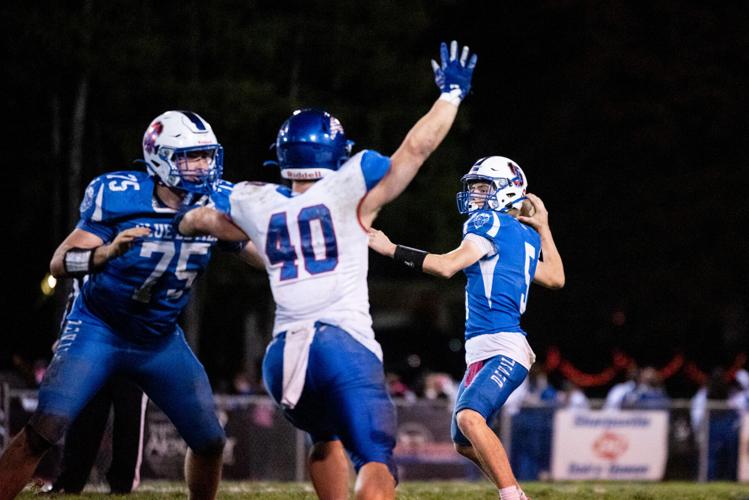 Sharpsville quarterback Caullin Summers throws a pass against the Bison.

Sharpsville’s Dalton Byerly leaps to catch a pass against LeBoeuf.

Sharpsville’s Garen Levis, center, celebrates with teammates after scoring a touchdown against Fort LeBoeuf on Friday at McCracken Field.

Sharpsville quarterback Caullin Summers throws a pass against the Bison.

SHARPSVILLE – It was a textbook play by Sharpsville freshman Kalvin McCullough. He read the route, planted his foot and drove on the ball.

He intercepted a pass with a little over a minute left to clinch the Devils’ 35-28 win on Friday night in Sharpsville.

“It feels real good,” McCullough said. “I made a couple big plays this season, but that was probably the best one.”

The win also saw senior receiver Garen Levis surpass the 1,000-yard receiving mark for the season. He became the first Sharpsville receiver to go over 1,000 yards in school history.

“All the hard work I put in, it just feels amazing right now,” Levis said.

Levis finished with six catches for 136 yards as Caullin Summers was 13-for-22 passing for 223 yards with three touchdowns and an interception. Summers also added 50 yards rushing on 17 attempts.

Braedon Summers was held to 16 yards rushing and a touchdown on three carries. He left after he was injured on a kick return, but he returned in limited action. Jaiden White became the second option in the running game. He finished with a team-high 55 yards rushing on six carries.

Levis opened the scoring early in the first quarter when he brought in a 25-yard touchdown pass from Caullin Summers.

Fort LeBoeuf (7-3) responded with a 28-yard field goal from Isaac McGuire midway through the first quarter.

Braedon Summers capped a 10-play drive at the end of the opening quarter with a 7-yard touchdown run up the middle as the Devils took a 14-3 lead.

A 34-yard field goal by McGuire cut Sharpsville’s lead to one score with 6:55 to play in the second quarter. Then the Bison tied the game after a fourth-down stop. McGuire sent a pop pass to Ryan Welka, who ran for 69 yards for a score. A 2-point run by Justin Leuschen tied the game at 14.

The Devils’ offense came to life in the third quarter, however. Caullin Summers found Killian Whalen in the left flat for a 10-yard touchdown pass. Then the Devils quarterback connected with Levis for a 55-yard score to put his favorite target over 1,000 yards.

Levis scored again after intercepting Conner McChesney and returning it 18 yards for a 35-14 Devils lead.

But the Bison put together a nine-play, 60-yard drive. Leuschen capped the series with a 3-yard touchdown run. After Carson Papay intercepted Caullin Summers, the Bison made it a one-score game when Leuschen found room on the right side and scored on a 51-yard run.

The Blue Devils failed to convert a fourth down at the Bison 38 with a little over four minutes to play. Fort LeBoeuf drove down the field, picking up a first down at the Devils’ 16-yard line.

But a first-down pass from McGuire was intercepted by McCullough in the left flat. Caullin Summers ran for first down, and Sharpsville opted to kneel to end the game.

“Kalvin McCullough, he’s only a freshman,” Sharpsville head coach Paul Piccirilli said. “We put him on the best receivers and tell him that’s who you’re guarding. For us to do that, to give him that responsibility, that’s how good this kid is. We’re very fortunate to have him for three more years.”

The Devils have won back-to-back games after dropping two straight to Farrell in West Middlesex and Grove City in Sharpsville. Their win over Hickory last week and the win on Friday were both one-score victories.

But a win is a win. and getting on the right track is more important at this time of the season with the playoff brackets set to be released over the weekend.

“Just another win (in Sharpsville). Last game here,” Levis said. “Getting ready for the playoffs, it’s really important to get another win in the win column.”