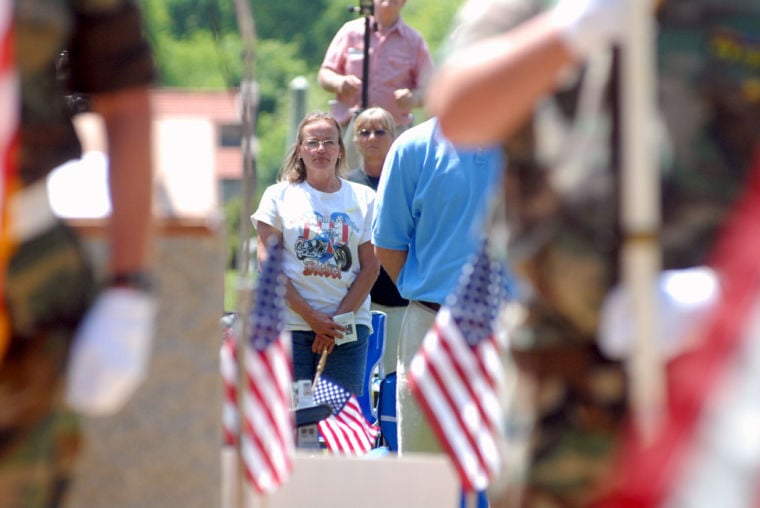 Mercer's Memorial Day 500 drew a large crowd to honor the county's veterans. The observance Monday culminated in a solemn ceremony at Citizens Cemetery. 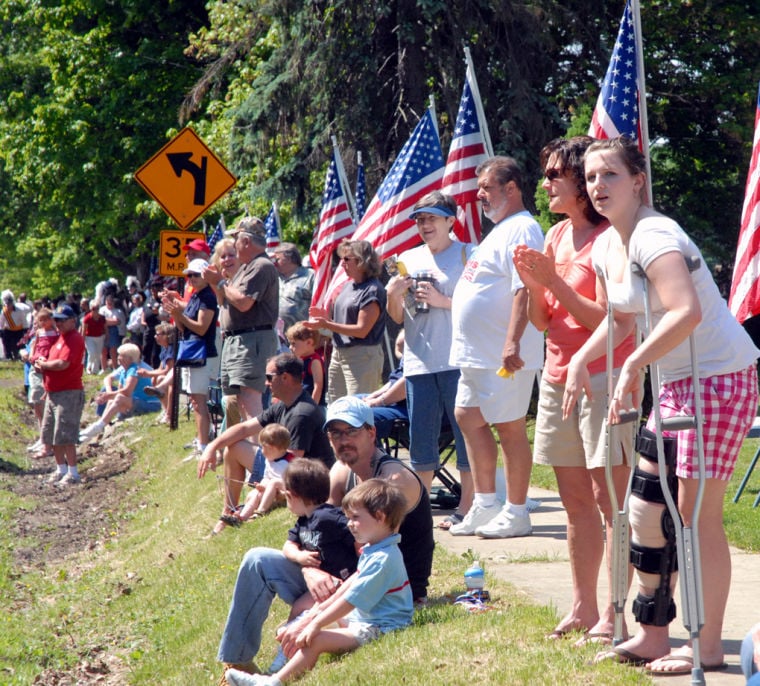 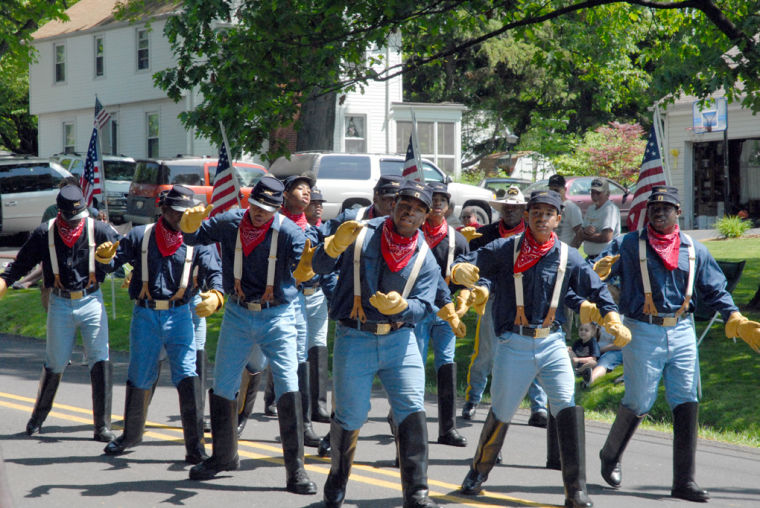 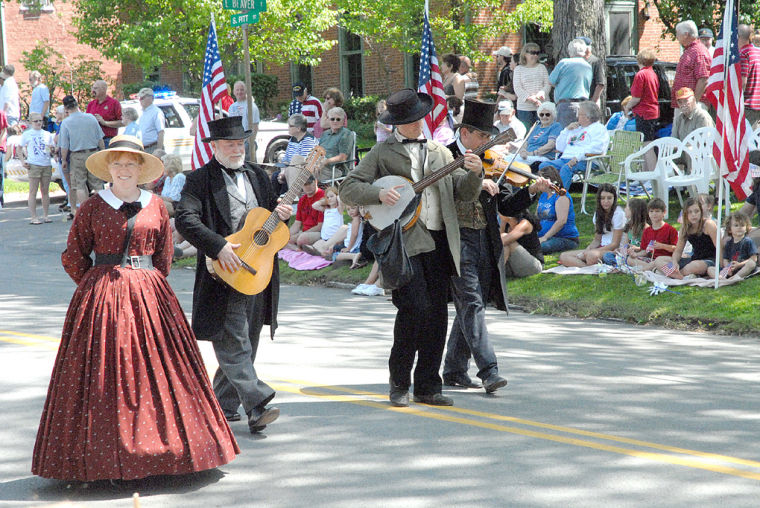 Mercer's Memorial Day 500 drew a large crowd to honor the county's veterans. The observance Monday culminated in a solemn ceremony at Citizens Cemetery.

The men who fought in our earliest wars didn’t seek or receive glory. They fought in bloody battles, helping to write the early part of American history, then they led ordinary lives and sometimes died penniless, their battle scars long forgotten, Capt. David Robinson of the 10th Pennsylvania Volunteer Reserve Corps of Civil War reenactors said. They’re buried now in aging plots at cemeteries that groups like Robinson’s make sure are decorated with flags this time of year. Robinson spoke at the 2009 edition of the Mercer Memorial Day 500, the county’s largest Memorial Day observance. Programs like the one on Monday at Mercer’s Citizens Cemetery, where speeches are given and songs are sung are nice, he said, but what’s really important is that the men buried in those old graves now marked by well-worn tombstones are remembered. “Look at all those flags out there,” Robinson said. “That’s what’s profound.” The “500” named for the field of 500 flags that line the streets around the Mercer County Courthouse, honors a different group of veterans each year. This year’s group fought in the country’s most divisive war, Vietnam. It was a conflict half a world away and came at a time in American history when the face of the nation was changed forever by civil unrest, assassinations and a still-evolving media that caught these profound events on film and broadcast them into millions of living rooms. “Most Americans are proud of you,” state Rep. Richard R. “Dick” Stevenson, said of the four honories. Stevenson served as a sergeant in the Air Force during Vietnam and said he was proud to introduce James Stokely, an honoree who served as a sergeant in the 12th Calvary, Company B, serving in Saigon and along the Cambodian border. Stokely was awarded the Bronze Star for Meritorious Service, Air Medal, Vietnam Campaign and Service medals, and the coveted Combat Infantry Badge in Vietnam. Stokely, “did the best possible job he could in facing the hostility felt at home,” Stevenson said. Fellow honoree Roger Klenovich served two tours in Da Nang province as a para-rescue man in the Air Force. Klenovich’s job was to jump out of planes in full rescue gear in the dead of night to try to rescue pilots downed by hostile fire. Klenovich flew over 100 combat rescue missions and because of him, 14 soldiers, Marines and airmen survived battle, state Sen. Robert D. “Bob” Robbins, said. Robbins also fought in Vietnam and visited him in De Nang during the war. Klenovich was awarded the Silver Star, Distinguished Flying Cross and 10 Air Medals for the service he performed for his country. Eric Knauff was a Greenville High School graduat e who enlisted in the Army in 1969. A helicopter pilot, he served as a chief warrant officer in the 7th Armored Squadron, Mercer County Commissioner Kenneth R. Ammann said. Knauff served in Khe San and flew missions into Laos and Cambodia, said Amman, himself a Navy Vietnam veteran, said. Knauff received three Distinguished Flying Crosses and four Air Medals with Valor Device for heroism. “Eric is an example of accepting the responsibility of serving the country,” Ammann said. Capt. Maurice Garrett Jr. never made it home from Vietnam, Shenango Valley Chamber of Commerce Executive Director George Geahart, who also served in the Army during Vietnam said. Garrett served as a squadron commander in the 101st Airborne. After flying serveral missions, he was grounded because of high frequency hearing loss, but volunteered for a short-handed mission in 1971. On Oct. 22, 1971, he took off with his team from Quang Tri aboard an AH1G Cobra gunship helicopter for an armed visual reconnaissance mission. He instructed the others to hold on the eastern side of a ridgeline while he continued westward into a valley to check weather conditions. About 5 minutes later, he gave instructions to the team to stay clear of his intended path in the clouds. His helicopter struck trees, impacted and exploded. His citations spoke of his utmost bravery and heroism, risking his life in the line of duty. His family believes honoring those who died and those who served in any war in turn honors our great country. Garrett said, “We are Americans and, if we try harder, we shall reach the goal of mankind: Peace.” Garrett is the only person from Mercer County declared Missing in Action by the military, although he’s presumed to have perished in the crash. Monday’s program also included music from the Penn Ohio Singers and Homefront, a group that plays Civil War era music, the Balmoral Highlanders bagpipe group, a rendition of Lincoln’s Gettysburg Address, a message by Col. Gary Solander, several C-130 flyovers and a 21 cannon salure by the National Guard.

US intel report on UFOs: No evidence of aliens, but. ...

WASHINGTON (AP) — Whatever or whoever they are, they’re still out there. U.S. intelligence is after them, but its upcoming report won't deliver any full or final truth about UFOs.

Thunderstorms likely in the evening. Then a chance of scattered thunderstorms later on. Low 67F. Winds SW at 5 to 10 mph. Chance of rain 70%.