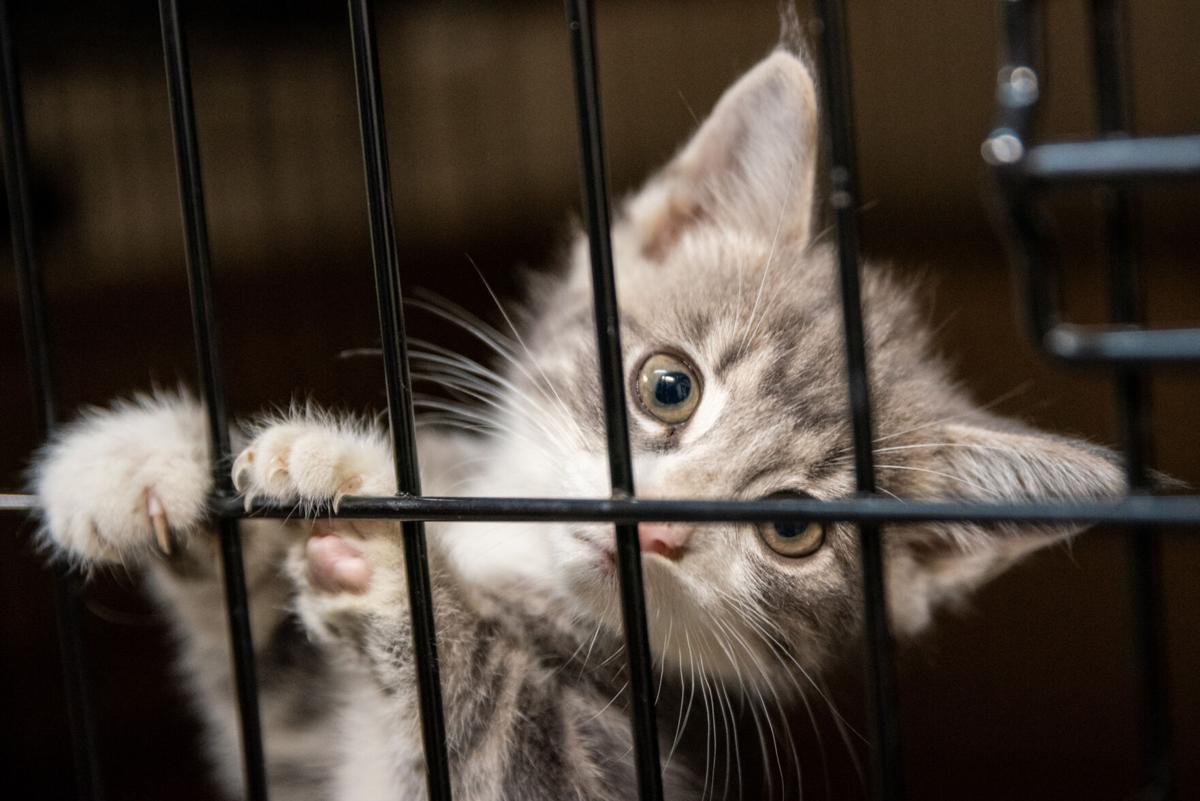 A kitten being fostered by Sue Smith, a Shenango Valley Animal Shelter foster parent, climbs up a cage at Smith’s home in Hermitage. 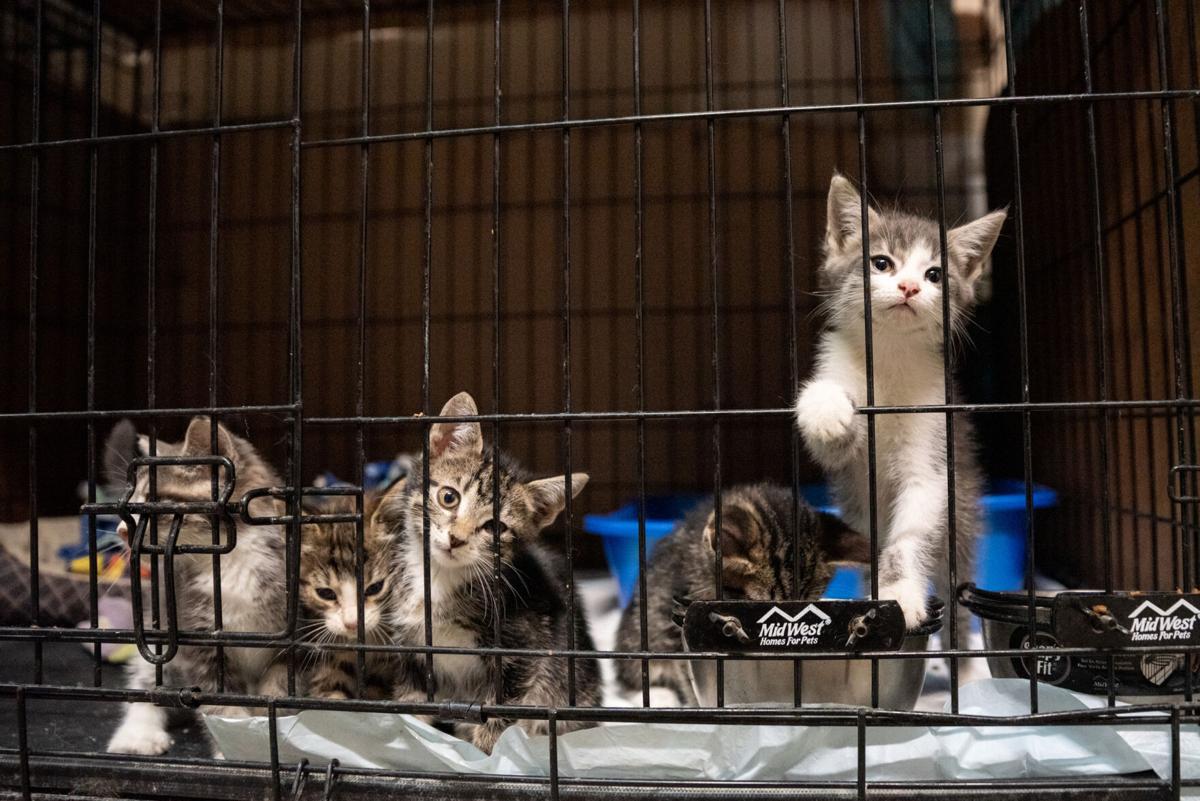 Cats being fostered by Sue Smith, a Shenango Valley Animal Shelter foster parent, look out of their cage at Smith’s home in Hermitage. 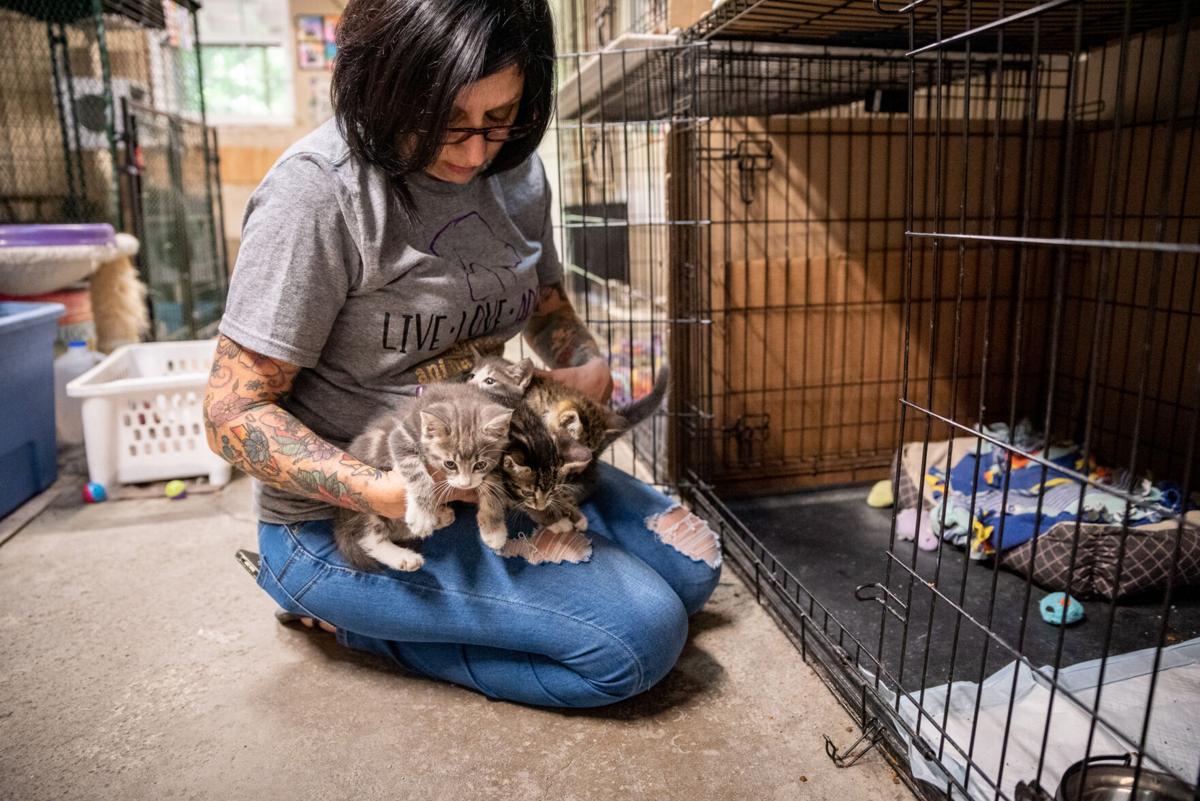 Sue Smith, a Shenango Valley Animal Shelter foster parent, interacts with some of the kittens she’s fostering at her home in Hermitage. 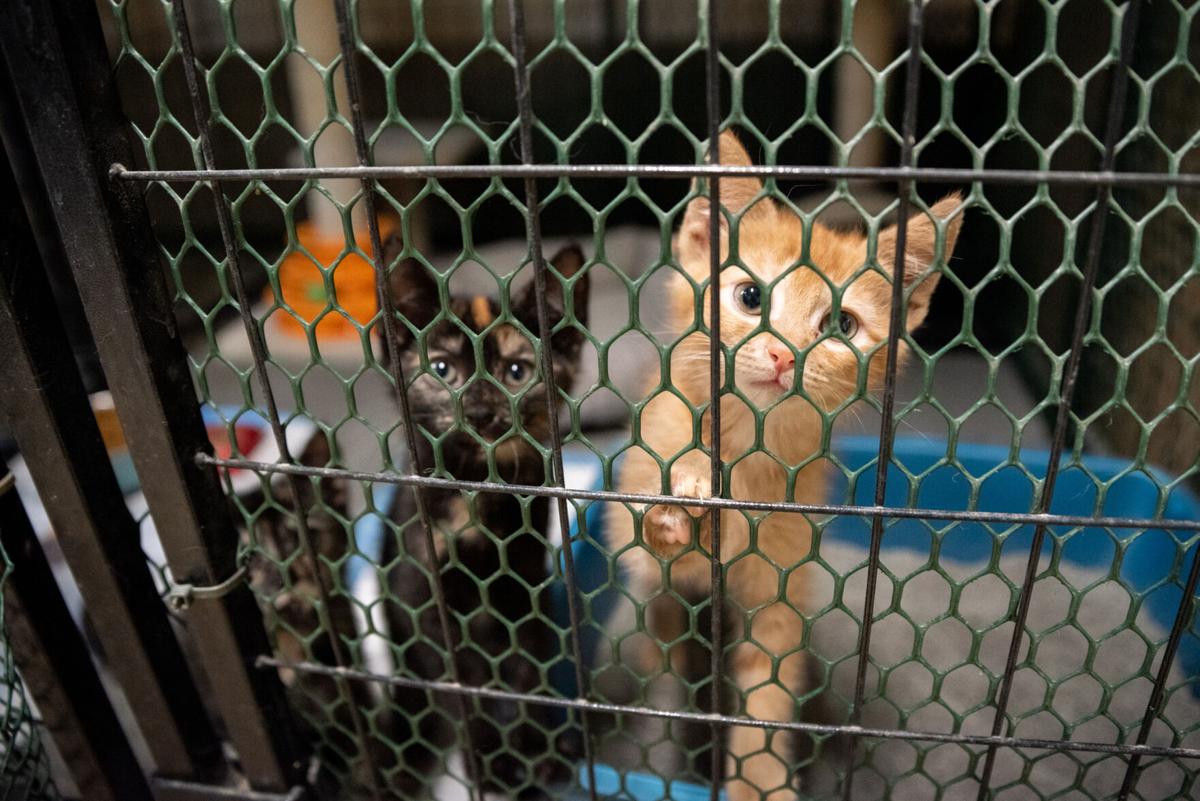 Cats being fostered by Sue Smith, a Shenango Valley Animal Shelter foster parent, climb up a cage at Smith’s home in Hermitage. 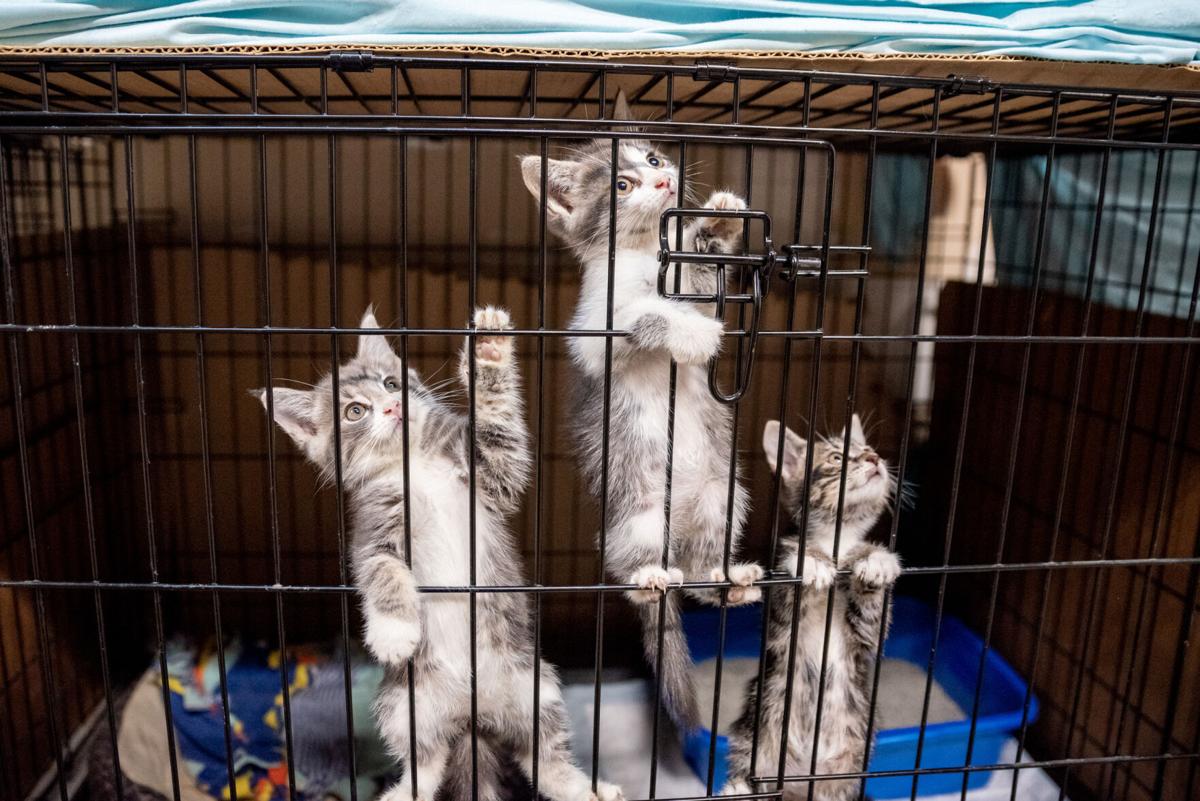 Rambunctious kittens being fostered by Sue Smith climb up a cage at Smith’s home in Hermitage. 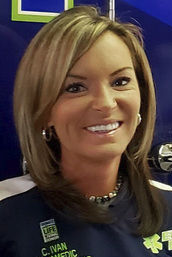 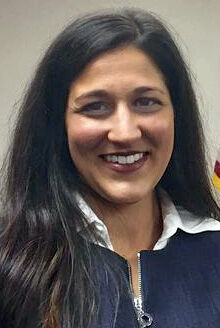 HERMITAGE — The Shenango Valley Animal Shelter and the Humane Society of Mercer County have different missions, but they share one thing: The space they have to keep animals is gone, but the demand isn’t.

As of this week, Shenango Valley Animal Shelter is working to find homes for 70 animals — the 52 cats and 18 dogs in the shelter and with at foster care homes. The Humane Society is caring for 30 cats and four dogs, all in foster care.

“The thing is, even if we’re full and have absolutely no room, if there’s a call for a stray animal somewhere, we have to go out,” said Angelia Sherman, manager of the Shenango Valley Animal Shelter.

The humane society responds to animal abuse and neglect throughout Mercer County.

For the animal organizations, the COVID-19 pandemic has presented a challenge. People often got pets during the lockdowns, but later decided that it was too difficult to care for the animals once school and work demands returned. So they returned return the pets.

Other factors included pet owners who didn’t want to get their animals spayed or neutered and ended up with more animals than intended, and people leaving animals behind when they move. Sometimes, pet owners simply call the shelter and ask to drop off an animal, threatening to let the animal loose if the shelter can’t take it.

While the Shenango Valley Animal Shelter has a particular area of focus and receives financial support from member municipalities, the Humane Society of Mercer County offers its services, as its name suggests, throughout the county.

Despite this, the humane society does not have a regular source of income, which means humane society officials must rely on donations to cover costs, including veterinary bills.

The humane society received a significant donation earlier this year, when Aaron Burnworth of Ramirez Property Investments LLC donated the building at 123 Edgewood Drive Ext., Transfer, that had been the Transfer Elementary School and later the Winner Institute of Arts and Sciences building.

Though this will finally give the humane society a building of its own — something the organization has lacked — it must undertake significant repairs to the building before staff and animals can move in. Renovation is estimated to cost about $500,000.

“We’ve already had people showing up to the building trying to drop animals off, just because they saw people there working,” Ivan said.

The Shenango Valley Animal Shelter likewise needs a new home, since the current shelter on Broadway Road in Hermitage was originally built as a no-kill shelter, with limited kennel space. Though the shelter has rare euthanizations for extreme circumstances such as severe injuries or ailments, it never kills animals simply to make space. That means an animal could be at the shelter for years before it finds a forever home, Sherman said.

Animal shelter officials are in the process of raising funds for a new building, which will be built on five acres along Lynnwood Drive not far from the current shelter. The Shenango Valley Foundation donated the property in April 2019, but the COVID-19 pandemic hamered fundraising efforts.

Although previous estimates suggested about $1 million would be needed to start work on the proposed building, Sherman said she would be open to beginning work on a smaller building that can be expanded as funding allows. If a portion of the new building is completed, shelter staff could even work out both it and the Broadway Road shelter.

But even without the cost for a bigger building, the animal shelter and humane society still have ongoing veterinary costs, which can grow quickly. A dog with a hip replacement can cost about $4,000. On top of that, every animal requires costs for spaying, neutering and vaccines.

Animal foster homes — people who donate time, effort and homes to care for animals until they are adopted or until space opens in the shelter — help to relieve some of this burden. Sherman said other foster caregivers drive animals to other shelters that have space available, Sherman said.

One foster caregiver, Sue Smith of Hermitage, has kept hundreds of cats over the past few years, and was working with about 20 cats in her home as recently as last week.

However, it’s not necessarily easy for people to become fosters, even if they are willing to put in the work.

At the Happy Tales Veterinary Hospital in Clark, co-owners Dr. Charles and Jennifer Yurkon set aside a kennel for a mother cat and her kittens that the animal shelter picked up around the loading docks of the Community Food Warehouse of Mercer County in downtown Sharon.

The mother cat was friendly enough, and showed signs of familiarity with people before she was picked up by the animal shelter. However, not all stray animals are as friendly for multiple reasons, such as triggers that might otherwise be unnoticeable.

Working through those problems to prepare an animal to be adopted is a difficulty some may not consider when planning to become a foster, Charles said.

“Sometimes we’ll get dogs in here that are fine with our female staff, but when I come in to look at them, they start getting nervous and growling,” Charles said.

Also of major help are the various rescues in the area, such as TNJ Rescue and Recovery, an organization founded by Tammy and John Novakovich.

Tammy, a former humane society officer and dog groomer, started the organization with her husband in May, and is already working with more than 30 kittens. TNJ is sometimes involved with trap-neuter-return programs to help prevent more stray or feral cats, but she said pet owners need to do their part in making sure their animals are fixed.

“People need to spay and neuter their pets, because there’s no reason to have them out when we’re going through something like this,” Tammy said.

Along with spaying and neutering their animals, Tammy said more animal fosters could help alleviate the problem, although potential fosters have to be willing to give a foster animal the same amount of care and attention as if they were a regular pet.

“You have to give it that love,” she said. “You can’t say, ‘well, it’s going to someone else eventually.’”

A steady rain this evening. Showers continuing overnight. Low 52F. Winds SSE at 5 to 10 mph. Chance of rain 100%. Rainfall around a half an inch.

Rain early...then remaining cloudy with showers late. Low 47F. Winds WSW at 5 to 10 mph. Chance of rain 80%. Rainfall around a quarter of an inch.

A few showers in the evening, then clouds lingering overnight. Low around 45F. Winds light and variable. Chance of rain 30%.