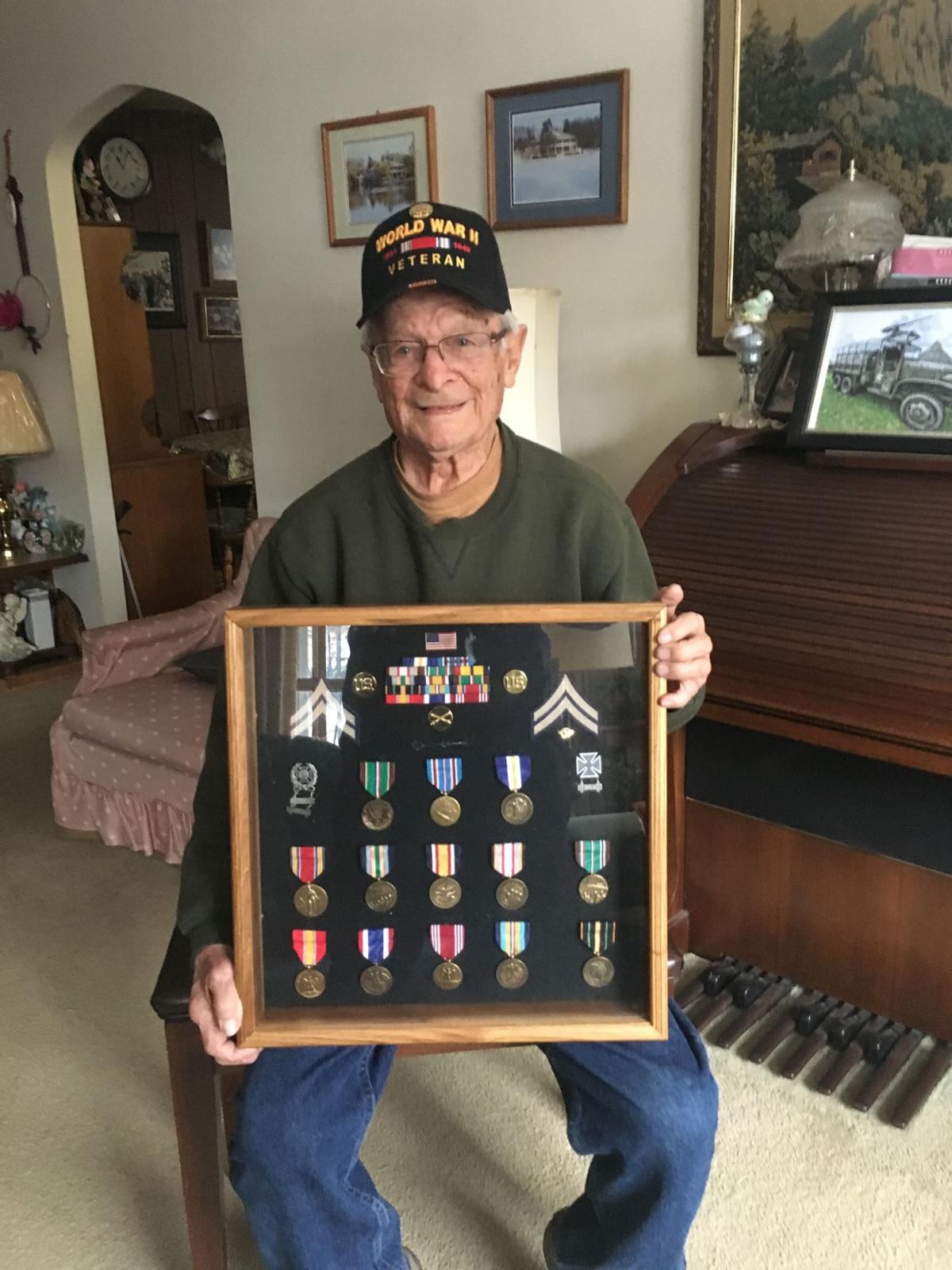 Ernie Laslow, 96, of Farrell, displays the medals recognizing his service in the U.S. Army during World War II. 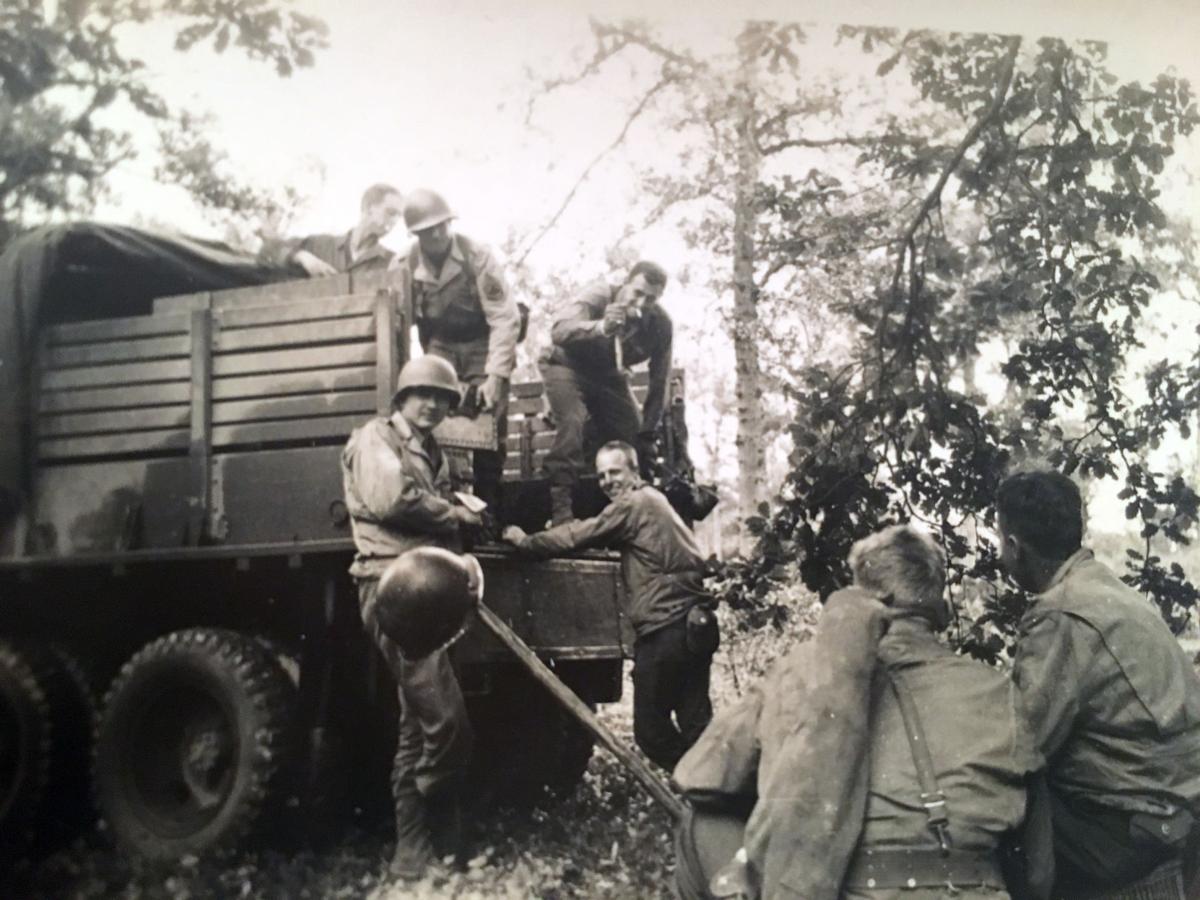 World War II veteran Ernie Laslow, now 96, of Farrell, is among the soldiers pictured here from his service with the U.S. Army in France. 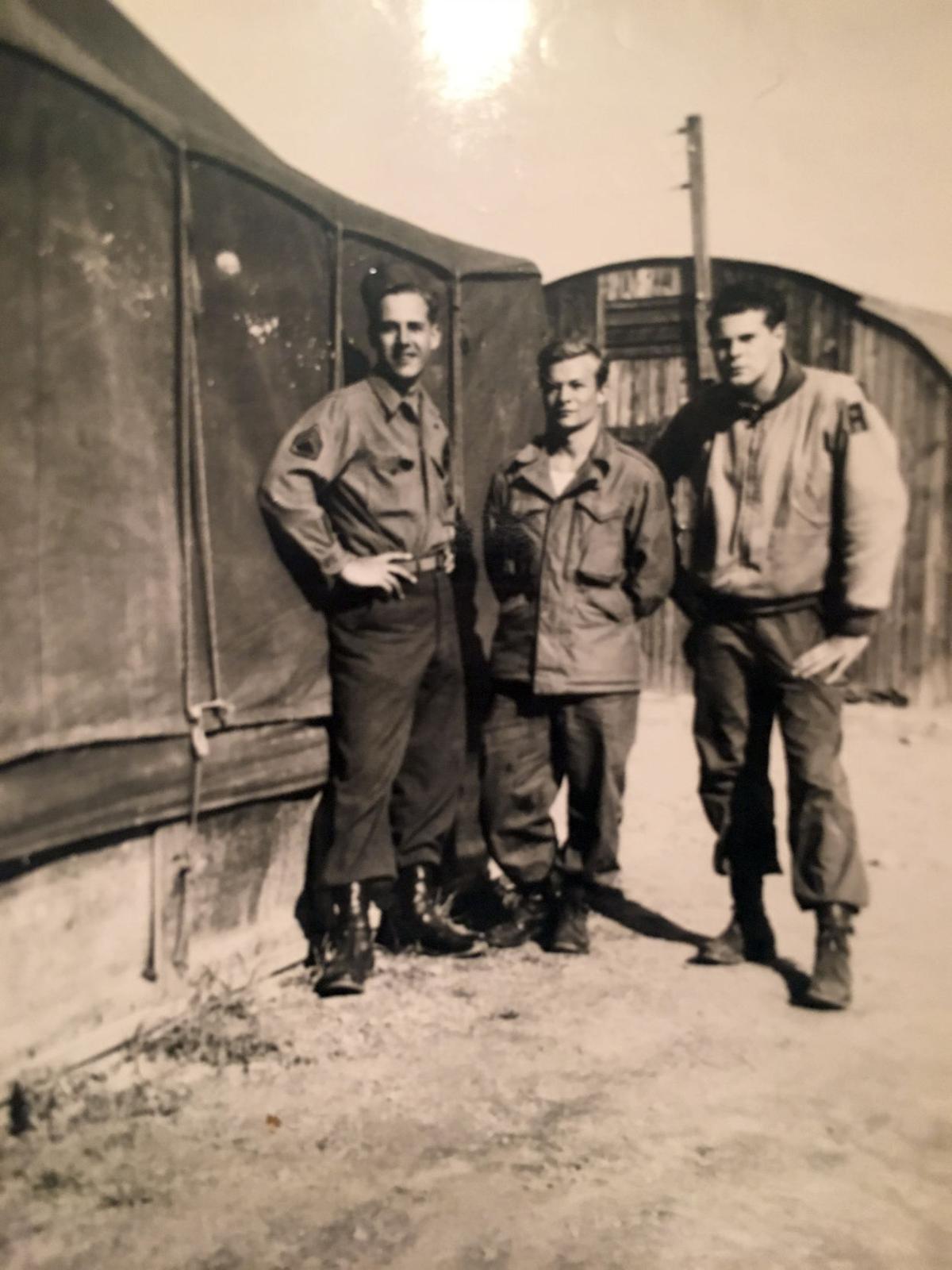 FARRELL – The morning of Dec. 16, 1944, didn’t seem much different for Ernie Laslow and his fellow soldiers — in fact, Laslow’s group of friends were tobogganing, taking advantage of the snowfall five miles from Marche in Belgium.

“We’d found a toboggan in a barn, so we took it for a ride down the hill,” Laslow said.

After a morning sled ride, the group headed up the hill and back to base camp, only to find the men of the U.S. First Army’s 980th Field Artillery Battalion running about and packing up all of the equipment.

“We asked, ‘what’s going on?’ and they said ‘the Germans are attacking, so we’re getting out of here and heading north,’” Laslow said.

The unit, which included 155mm “Long Tom” artillery guns, moved north to link up with British forces, a process which Laslow said was made all the more difficult due to not just the cold and the snow, but the roads had been torn up by heavy vehicles and tanks.

Laslow’s duty was to serve as the gunner of a .50 caliber machine gun turret on a Deuce-and-a-Half truck, standing next to the truck’s driver. Some of the road signs were also missing or removed, but American military policemen were able to direct the soldiers, Laslow said.

“We heard that the Germans had dropped in some paratroopers wearing American uniforms, but we never met any of those,” Laslow said.

As the men and equipment withdrew, Laslow said many of the infantry were sleeping in foxholes when word of the attack came, and they had to start moving in whatever they were wearing, regardless of whether it was heavy gear for the winter.

“We had a lot of guys that ended up getting frostbite,” Laslow said.

The Battle of the Bulge wasn’t the only combat Laslow experienced. The Farrell resident arrived in Europe on Utah Beach, six days after the D-Day landings at Normandy, and was among the forces that helped cut off the Cherbourg peninsula in France, which helped isolate 30,000 German soldiers, although Laslow said the unit traveled through many villages in France, Belgium and Germany.

In another instance, Laslow’s unit was arranged along a road near Aachen, Germany, when a Messerschmitt Me. 109 fighter airplane strafed the line of vehicles. Laslow, who manned a truck with his driver Horace Carter, got on the truck’s machine gun and fired at the airplane.

“Carter said ‘he’s coming this way,’ so I got on the gun and aimed up the way he’s going and fired, then Carter said ‘You didn’t get him,’” Laslow said.

Others in the convoy fired at the German fighter as well so it wasn’t certain who hit him, but the airplane eventually began trailing smoke, flew away for a bit and then crashed into the ground, Laslow said.

“I hoped the guy jumped out before it crashed, but I didn’t see any parachute,” he said.

Not all of Laslow’s time in Europe was unpleasant though, as French civilians were very friendly toward Americans and sometimes brought out bottles of wine for the soldiers. Even most of the German civilians were friendly, particularly the children, Laslow said.

“We had these big chocolate bars that they used to give us, so I would to give those to the kids we met,” he said.

Laslow’s unit eventually got within 15 miles of Berlin when word came that the Germans had surrendered and the war in Europe was over. But the war with Japan was still being fought, so the 980th Field Artillery Battalion prepared to be sent to the Pacific.

However, while the unit was on a ship heading toward England, the men found out that American forces dropped two atomic bombs on Hiroshima and Nagasaki, bringing about Japan’s surrender and the end of World War II — instead of the Pacific, Laslow said the men would be sent home.

“When we found out they dropped the bombs, everyone went crazy, because that meant the war was over,” Laslow said, though the men at the time didn’t realize the difference between atomic bombs and conventional bombs.

“We didn’t know what it was, we only found that out later,” he said.

When the war ended and Laslow went home, he eventually found himself with other soldiers dropped off by bus at Farrell High School on Roemer Boulevard and had to walk the rest of the way to his Farrell home. His family didn’t expect him to come home that day, and by the time Laslow was walking home, it was around 9 p.m. and dark outside.

“My brother Jim opened the door and saw me standing there, and he shouted, ‘Ernie’s home!’” Laslow said.

Ernie was one of five brothers who joined the service, all of whom managed to come home safely. Ernie also tried to keep in touch with the “brothers” he’d made in the service after the war ended.

“We were together, night and day, every day, for about three years while we were in the Army,” he said. “When you spend that much time together and you have to go through all of that together, you get to be closer than brothers.”

A gathering of 150 clergy, family members, musicians, and well-wishers came together on Wednesday, Jan. 15, 2020 for a gospel infused homegoing celebration honoring the life of James Charles "Butch" Dobie, formerly of Wheatland, at Greater Cooper A.M.E. Zion Church in Oakland, Calif. On Jan.…