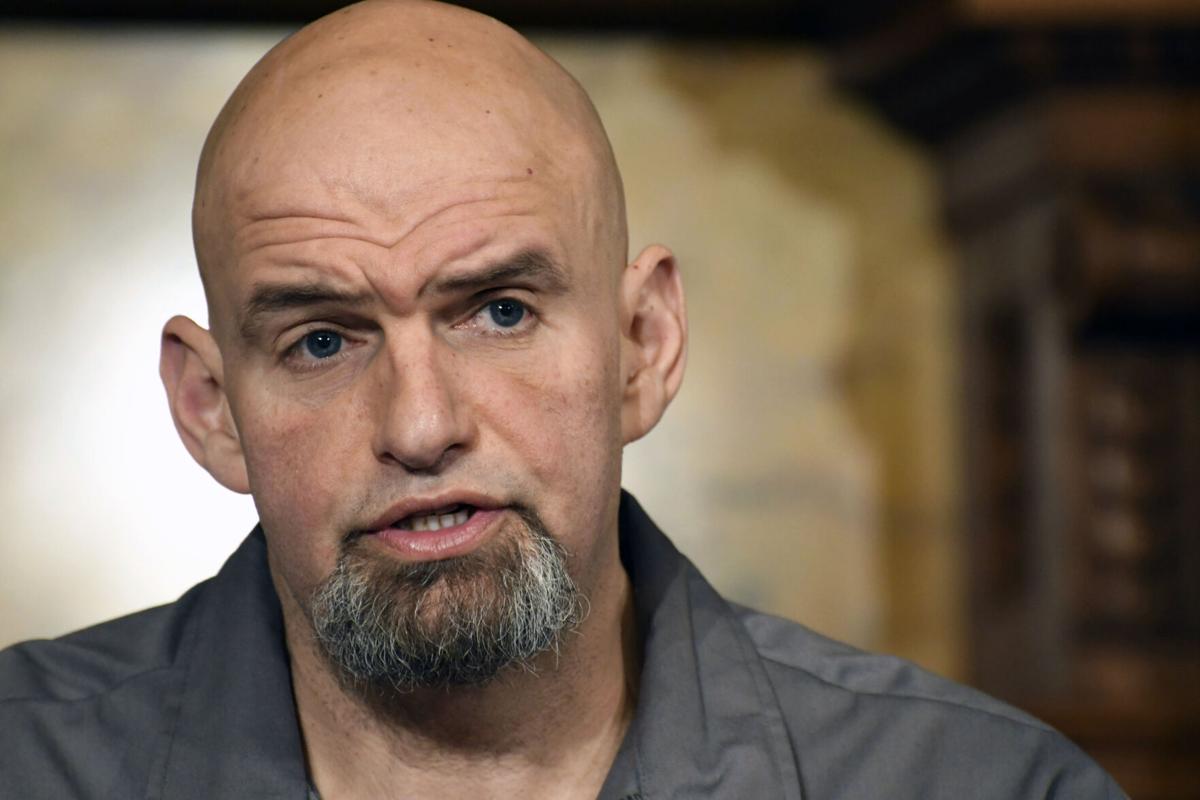 FILE - In this Thursday, Jan. 24, 2019 file photo, Pennsylvania Lt. Gov. John Fetterman speaks at a news conference in the governor's Capitol reception room in Harrisburg, Pa. A provision slipped into lame-duck budget legislation Friday, Nov. 20, 2020 would ban flags not approved by lawmakers from flying at the state Capitol — such as the pro-marijuana legalization and LGBTQ- and transgender-rights flags that Fetterman hangs from his second-floor outdoor balcony that overlooks the building's broad front steps. (AP Photo/Marc Levy, File) 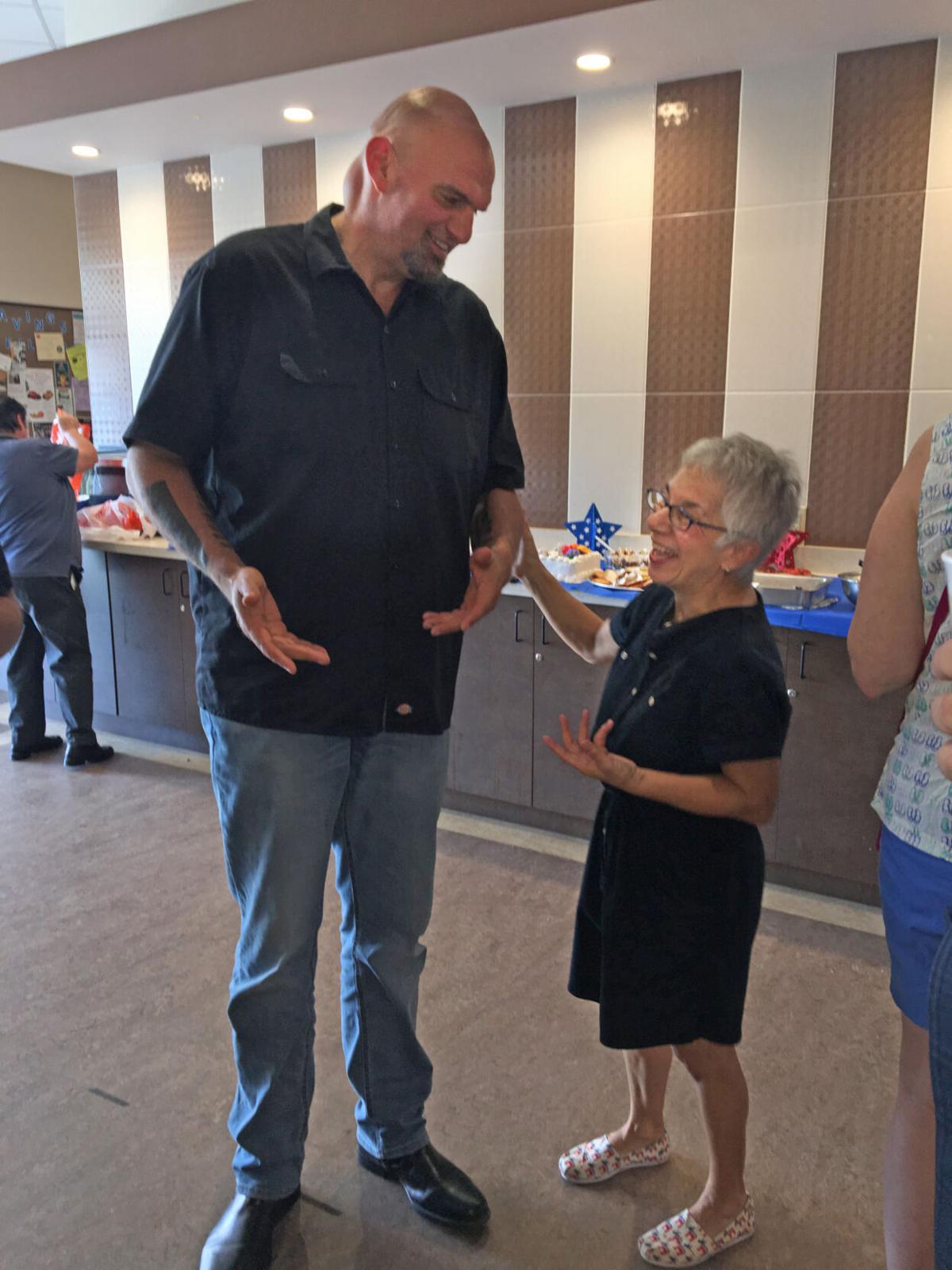 HARRISBURG -- Lt. Gov. John Fetterman announced Monday that he’s running for the Democratic nomination to replace the retiring U.S. Sen. Pat Toomey, R-Pa., becoming the first candidate to throw his hat into what’s expected to be a crowded ring.

The Senate race, coupled with an open race for the governor’s office because Gov. Tom Wolf is limited to two terms in office, means the 2022 election will feature a rare combination of contested statewide races.

Attorney General Josh Shapiro, a Democrat, who was just re-elected to a second term, is generally considered the front-runner for the Democratic nomination for governor said Mike Mikus, a political consultant who works with Democratic candidates.

Shapiro hasn’t formally announced his candidacy, but even so, Democrats interested in statewide office will likely be looking to join Fetterman in the race for the nomination for the Senate seat.

"All the action on the Democrats' side will be in the Senate race," Mikus said, because Shapiro is widely seen as the likely nominee. Running against Shapiro in the primary would seem like "a suicide mission," he said.

Christopher Nicholas, a consultant who works with Republican candidates agreed that Democratic candidates will likely believe they have a better chance running for the Senate seat than they would have against Shapiro in the race for governor.

On the Republican side, there is no obvious front-runner for either governor or the Senate seat.

Chris Borick, a political science professor at Muhlenberg College added that Fetterman will be a “formidable” candidate who has quickly demonstrated that he can fund-raise, which will be significant in what will likely be an expensive race.

After announcing that he was considering a run for Senate, Fetterman’s campaign brought in $1.3 million from almost 43,000 donors.

Fetterman — who is perhaps best known for championing the cause of legalizing adult recreational use of marijuana — may represent the ideological shift of the Democratic Party, Nicholas said.

But he doesn’t have the advantage of geography — Fetterman is the former mayor of Braddock, near Pittsburgh. The most significant growth for the Democratic Party has been in the suburban areas of southeastern Pennsylvania around Philadelphia.

Fetterman “hasn’t been fully vetted by voters in the general election,” Nicholas said.

Fetterman’s first run for statewide office, he came in third in the 2016 Democratic primary won by Katie McGinty, who then lost to Toomey in the general election.

Fetterman’s attributes, like his tattoos and penchant for wearing shorts in the winter “play well on social media” but they may not resonate as much with everyday voters, Nicholas said.

Fetterman will almost certainly have competition for the Democratic nomination, Mikus said.

“He’s a strong candidate, but it’s not a foregone conclusion” that he will win the Democratic nomination, Mikus said.

Nicholas said that a run for Senate will be tempting to newer members of Congress and there are four female Democratic members of U.S. House from the Philadelphia suburbs — Madeleine Dean, Susan Wild, Mary Gay Scanlon, and Chrissy Houlahan, all just elected to their second terms in office.

Of those, Houlihan has been the candidate most often linked to a potential Senate run.

Geographic factors could loom large, depending on who runs, Borick said.

The number of candidates — and participation from southwestern or southeastern Pennsylvania could determine which candidate comes out on top, if he or she has less regional competition than the other candidates.

Mikus said that “a strong tell” that Lamb is considering a run for another office is that the congressman ended 2020 with $860,000 in his campaign war chest. He added that an indication that Kenyatta is thinking about running for higher office is that, like Fetterman, Kenyatta has been a regular guest on cable news talk shows.

Yenerall said that Fetterman also has the advantage of having used his 67-county marijuana legalization listening tour in 2019 to establish connections with local Democrats in rural parts of the state that most statewide candidates begin with few relationships or familiarity.

While the race for the nomination for the Democrats may hinge on geography, Republicans must grapple with the lasting influence of former President Donald Trump.

Mikus said that another potential candidate to watch would be U.S. Rep. Guy Reschenthaler, R-Allegheny County, who was just re-elected to a second term in office, was one of the Republicans who challenged the election results, and had closely aligned himself with the former president.