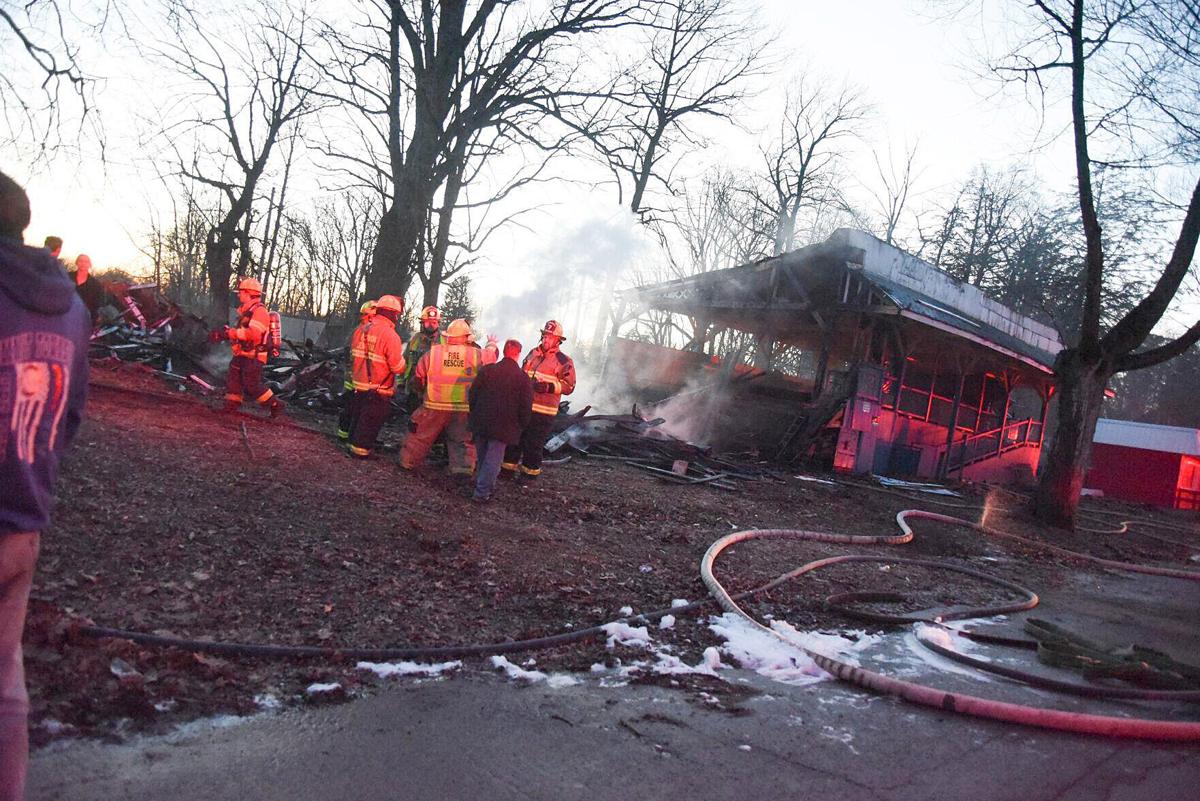 Firefighters stand near the entrance to the Blue Streak roller coaster at Conneaut Lake Park as most of the track smolders in the distance. 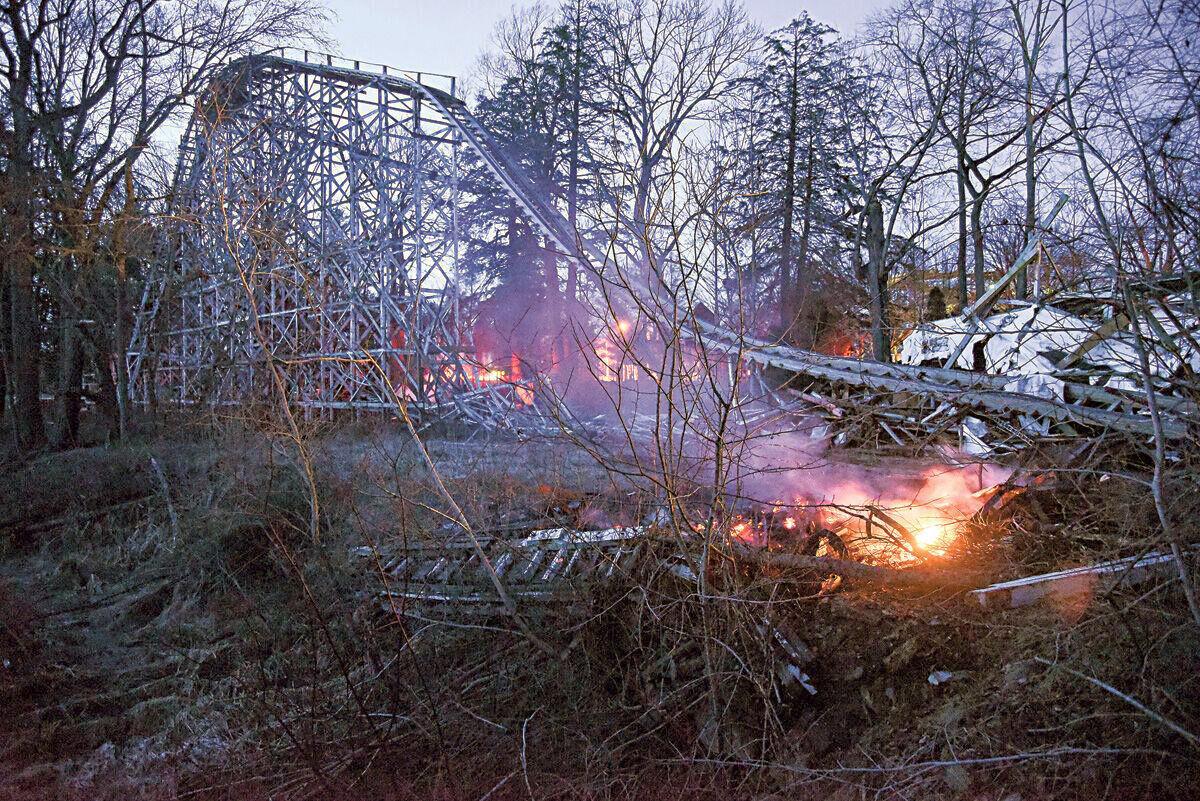 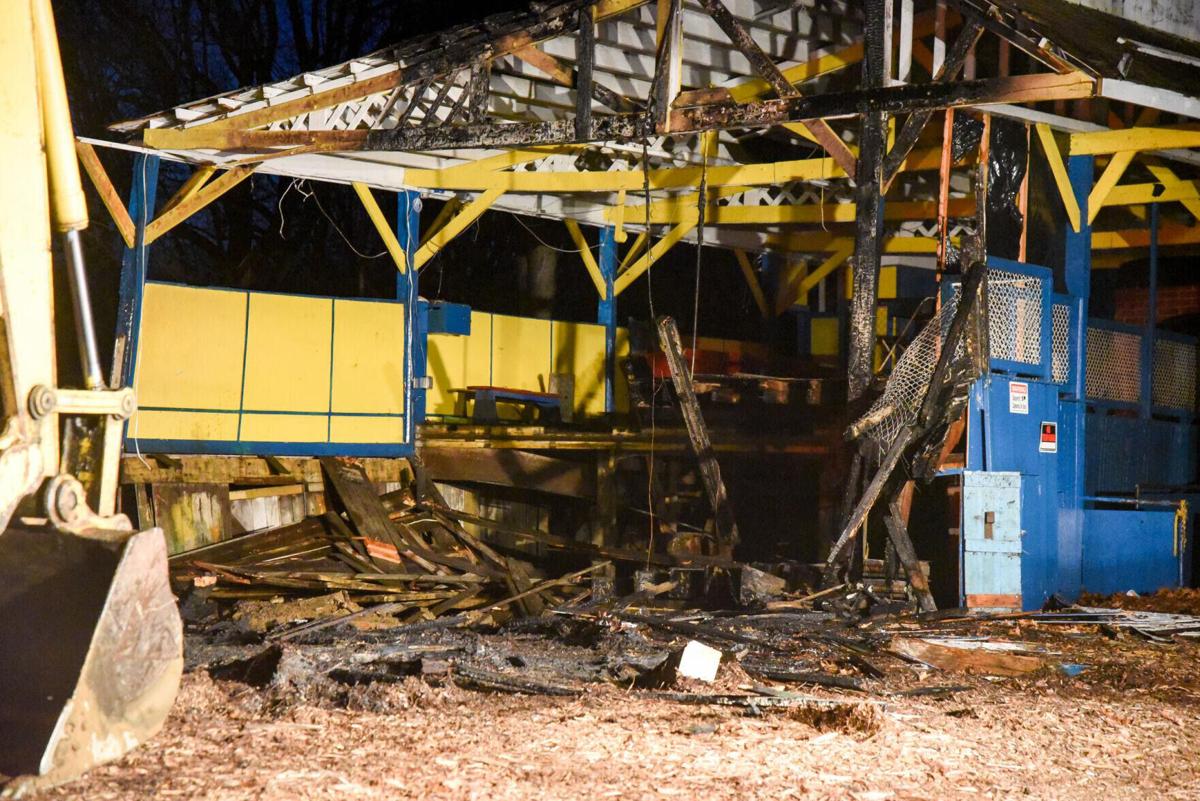 The remains of the fire-damaged entrance to the Blue Streak roller coaster at Conneaut Lake Park. 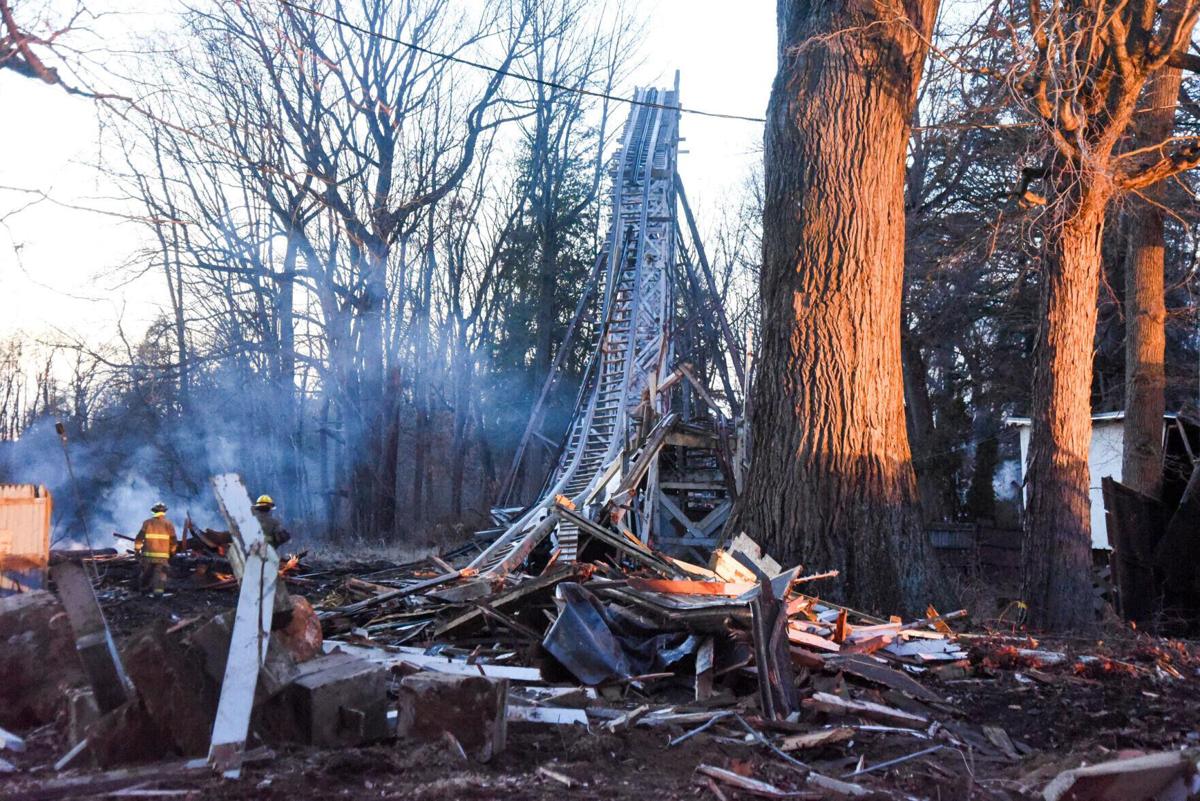 One of the hills of the Blue Streak roller coaster rises above the smoldering ruins of the famed amusement park ride. 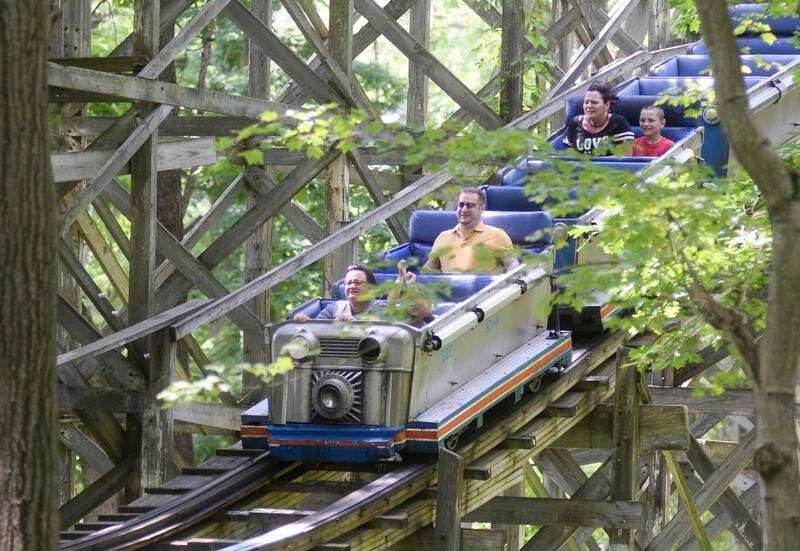 The wooden Blue Streak roller coaster was among the landmark attractions at Conneaut Lake Park. It was reported destroyed Tuesday in a fire.

Editor's note: Since publication of this article, The Meadville Tribune has obtained documentation of a demolition permit being issued on Jan. 4, which contradicts statements from the Summit Township zoning officer. The story has been updated to add that the owner of the park now says the coaster itself was being demolished Tuesday before the fire began.

SUMMIT TOWNSHIP, Crawford County — Another icon at Conneaut Lake Park is no more.

O’Meara said the fire started due to a controlled burn of old wood that was being performed by park staff. O’Meara said while one pile was being burned, the wind shifted and caught an adjacent pile on fire, which the workers initially didn’t notice. Flames from the second pile were able to reach the Blue Streak, according to the chief.

The fire was reported at 4:23 p.m. By the time firefighters arrived, the section of the Blue Streak leading to where the coaster trains launched was already heavily burning.

“You could see it from Harmonsburg,” O’Meara said.

Randy Fyock, Summit Township’s zoning officer, confirmed to the Meadville Tribune that a demolition permit for the Blue Streak will be issued Wednesday.

Late Tuesday night, New Conneaut Lake Park issued a statement via its Facebook page saying “damage to the Blue Streak was not caused by the fire. It was from the heavy equipment demolishing it as per permit this morning.

“A burn permit was also issued to have small controlled fires to burn the wood as demolition continued. A mechanical issue occurred to the heavy equipment used to assist in the control, causing the fire to spread to the front part of the loading dock,” the statement said.

Fyock said Tuesday that a demolition permit had not been approved prior to the fire.

Keldon had requested several controlled-burn permits for debris in early December from the township, Fyock said, adding that the recipient is to fill out the burning permit and coordinate its use with the township’s fire department. Summit Township Volunteer Fire Department also also informed of the controlled burn, according to O’Meara.

The chief said he was unsure whether the coaster was insured for the damages. He said he would consult with a Pennsylvania State Police fire marshal about whether a followup investigation was necessary, though he indicated it was unlikely given the apparent accidental nature of the fire.

There were no injuries in the fire, nor were any other rides or park features reported as damaged. O’Meara said one of the main objectives of the responding firefighters was to keep the flames from reaching the nearby carousel.

The fabled wooden-framed roller coaster is more than 80 years old. Designed by Ed Vettel, the Blue Streak dates from the park’s 1938 season. It’s the 17th-oldest wooden roller coaster in the United States and was one of two shallow coasters designed by Vettel remaining.

The Blue Streak has an out-and-back design with a lift hill, two camel-back hills then a series of short hills after a speedy turnaround. The coaster’s maximum height is 77 feet with a 2,900-foot-long looped track.

In an interview last May, Joseph told the Tribune the Blue Streak wouldn’t be operational in 2021, but was to be examined in the fall.

“We’ll get some structural engineers in. No final decision has been made,” Joseph said in an interview published May 25.

“The manner in which the park has conducted business this summer, including the removal of many longtime rides and structures and nearly nonexistent transparent communications, has been most troubling to the park’s supporters,” the statement said.

When asked by the Tribune on Sept. 2 about the ACE’s concerns, Joseph declined to comment.

Tuesday’s fire is not the first to lead to the destruction of a feature at Conneaut Lake Park. On Feb. 1, 2008, the Dreamland Ballroom was destroyed by arson — a fire that caused an estimated $1.5 million in damages, while Aug. 1, 2013, saw the Beach Club nightclub complex along the lakeshore aflame. That latter fire, ruled of undetermined origin by a state police fire marshal, caused more than $600,000 worth of damages.

This is also the second iconic ride of the park to be lost in recent years. The Tumble Bug, a 1920s-era, low-level coaster that was one of only two rides of its type, was removed last spring.

A post made at New Conneaut Lake Park’s Facebook page on May 22 said the ride couldn’t be repaired, though the post said the Tumble Bug’s cars were saved.

The Blue Streak, for similar repair reasons, did not operate during the park’s shortened 2021 season.

Joseph bought the park for $1.2 million from the Trustrees of Conneaut Lake Park through federal bankrupcy court in March 2021.