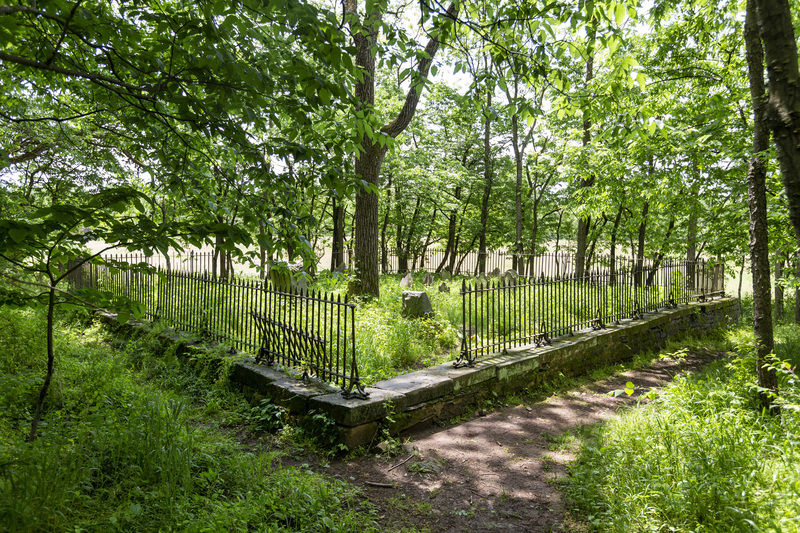 Joe Hermitt/The Patriot-News via APA stone wall and iron fence surround a hidden cemetery along the Appalachian Trail in Cumberland County, Pa. It holds about 20 graves, with the newest dating to 1898. 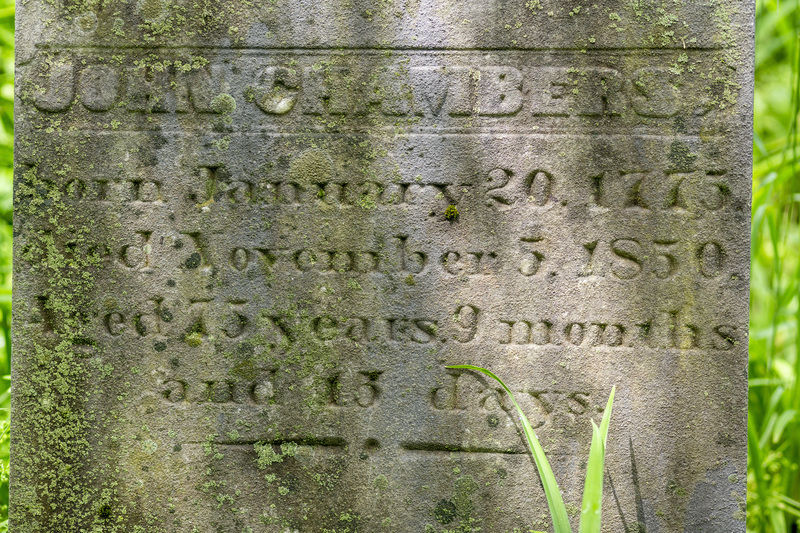 Joe Hermitt | The Patriot-News via APA headstone marked John Chambers says he was born in 1775 he lived to what was then a ripe old age of 75 in 1850. He lies in the Chambers Farm Cemetery, between Mechanicsburg and Carlisle, Pa. 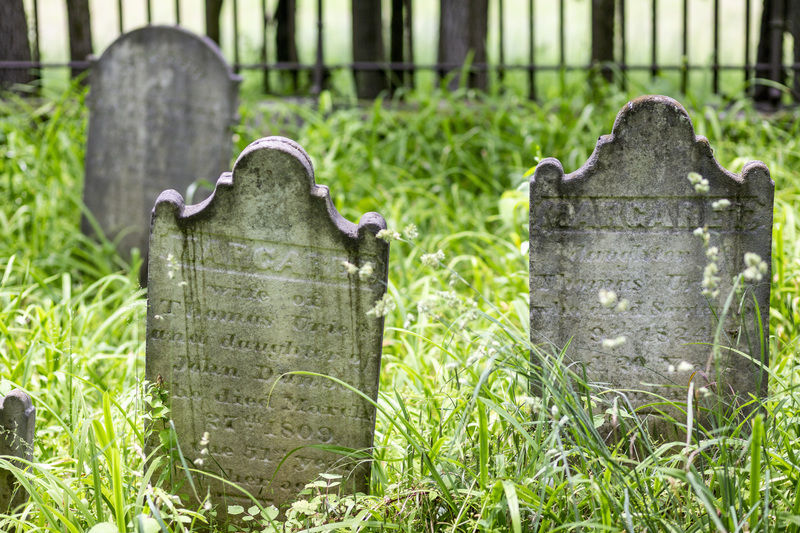 Graves in a hidden cemetery along the Appalachian Trail in Cumberland County, Pa.Joe Hermitt | The Patriot-News via AP 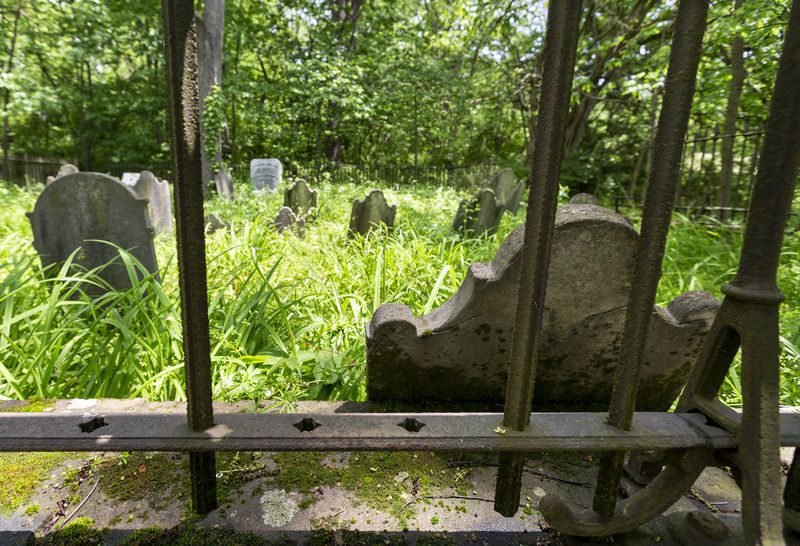 Joe Hermitt | The Patriot-News via APA tombstone rest against iron bars of the fence surrrounding a hidden cemetery along the Appalachian Trail in Cumberland County, Pa.

Joe Hermitt/The Patriot-News via APA stone wall and iron fence surround a hidden cemetery along the Appalachian Trail in Cumberland County, Pa. It holds about 20 graves, with the newest dating to 1898.

Joe Hermitt | The Patriot-News via APA headstone marked John Chambers says he was born in 1775 he lived to what was then a ripe old age of 75 in 1850. He lies in the Chambers Farm Cemetery, between Mechanicsburg and Carlisle, Pa.

Graves in a hidden cemetery along the Appalachian Trail in Cumberland County, Pa.Joe Hermitt | The Patriot-News via AP

Joe Hermitt | The Patriot-News via APA tombstone rest against iron bars of the fence surrrounding a hidden cemetery along the Appalachian Trail in Cumberland County, Pa.

MIDDLESEX, Pa. (AP) — It’s a curious sight to come upon while walking the Appalachian Trail in Cumberland County — a tiny, ancient cemetery, nearly consumed by trees, brush and earth.

Many a hiker has surely stepped inside the pitted iron fence and lichen-encrusted stone wall and wondered: How long since anyone was buried here? Why this seemingly disconnected spot? Must it remain forever? What does the law say?

Local historians know this — it’s the Chambers Farm Cemetery, named after a family who once owned the land. They also tell of a related mystery, a cemetery nearby for slaves who once lived on the property.

“That cemetery is just gone. We have no idea where it is on the property. There is no record of it,” said Lindsay Varner of the Cumberland County Historical Society.

Its existence is known from memories, including a decades-old story of a farmer unearthing remains, of people long dead.

The Chambers Farm Cemetery, on land bordered by Old Stonehouse Road and Appalachian Drive between Mechanicsburg and Carlisle, is one of many family cemeteries that once dotted the region before community cemeteries became the norm.

Many are lost — built upon, overgrown, sunken into the earth or forgotten. There’s no official record to compare the original total to the number known today.

“That’s something, in terms of research, I would love to work on,” Varner said.

Interest in genealogy has led to rediscovery of some old cemeteries and spurred searches for others.

People often come to the historical society looking for clues to locations of burial spots of long-gone relatives.

“There are family members constantly looking for cemeteries that no longer exist,” Varner said.

Rediscovery of a cemetery sometimes begins with a clue, such as someone finding a headstone that had been repurposed as a paving or foundation stone, according to Varner.

She knows of assorted old cemeteries in Cumberland County that nearly vanished. Some have been rescued through efforts such as a Boy Scout working on an Eagle Scout badge.

Carmen James remembers looking out her window in Mount Holly Springs and seeing a funeral procession when she was a little girl in the early 1950s.

The mourners were headed for a cemetery near the historic Mount Tabor Church, which served a local Black community. James said she has hazy memories of a burial spot where people would sometimes sit and relax.

Eventually the cemetery became overgrown and its exact location forgotten. Recently, James and others launched an effort to find it. Using chain saws, weed trimmers, rakes and shovels, they cleared a spot, which turned out to be the wrong one.

They tried a different spot and last year uncovered a rusty metal tag marking the grave of Betty Johnson, who died in 1952 or 1953 — possibly the funeral James remembers from her childhood.

In February, James and others from the Mount Holly area and beyond continued clearing the site. They were in contact with Dickinson College students who planned to use ground-penetrating radar to find and map other graves. The coronavirus pandemic put the effort on hold, however.

Old cemeteries have great historical value, providing evidence of things including old settlements, cultural and religious practices and genealogy, according to the Pennsylvania Historical and Museum Commission.

They can give people a sense of the land and place where their ancestors lived, according to Varner. When no photo of a long-dead ancestor exists, a photo of a gravestone can illustrate a family tree.

Yet old cemeteries are governed by a patchwork of laws, some more than a century old, which can be confusing and sometimes fail to protect them. One Pennsylvania law, for example, dictates a process for when churches, municipalities or associations want to redevelop a cemetery site. But it doesn’t fully address what should happen when the cemetery sits on land owned by a farmer or a developer with no connection to people buried there.

Another law falls short of requiring private owners to preserve cemeteries on their properties, allowing removal of headstones or graves if granted permission from descendants and a court.

“In short, there is no blanket protection for all historic cemeteries,” said Bryan Van Sweden of the Susquehanna Region State Historic Preservation Office.

The Chambers Farm Cemetery on the Appalachian Trail contains about 20 graves, with the newest dating to 1898, according to copies of records housed in the state library in Harrisburg and supplied by Varner.

A road once led to the cemetery, according to an 1849 record.

It’s now owned by the National Park Service, which came into possession of it about 30 years ago when it acquired land for the Appalachian Trail, according to Mike Bowman, a Cumberland Valley Appalachian Trail Club board member. Before that, the trail had followed public roads in Cumberland County.

The club has tried to maintain the cemetery. But it’s a challenge for the volunteer organization responsible for tasks such as cutting up fallen trees, trimming brush, digging drainage trenches and filling mud holes along 17 miles of trail.

The situation was better a few years ago when a Mechanicsburg Area School District teacher used the cemetery as an educational project, with students doing physical upkeep and researching the cemetery, Bowman said.

The group obtained a grant it planned to use toward more substantial renovations, he says.

But getting federal permission proved to be a long, frustrating process, and Bowman said the teacher has since left the district.

“It has fallen back. It’s looking pretty crummy out there right now,” he said.

Overall trail maintenance was put on hold this spring because of the coronavirus shutdown. Bowman said he hopes to soon spend a few hours removing brush and weeds at the cemetery.

Bowman says he regularly sees long-distance hikers set down their packs and venture inside.

“First-timers almost always stop and walk around,” he said.