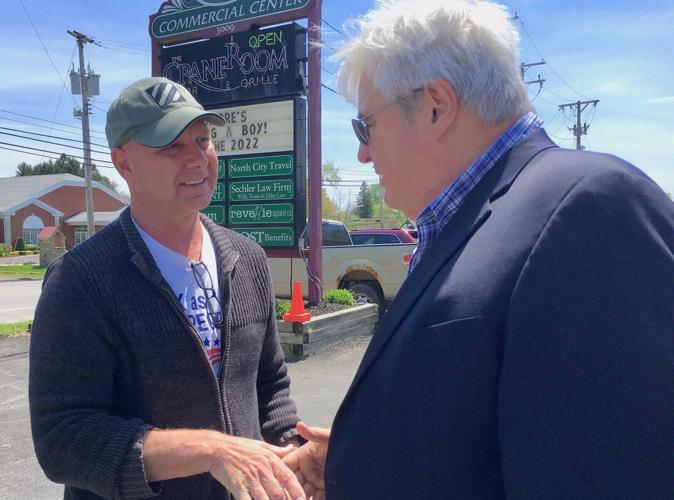 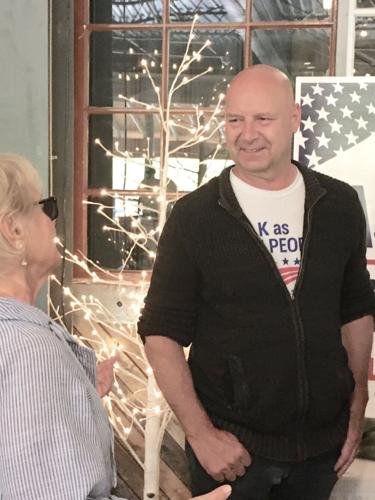 Doug Mastriano chats with a woman in attendance at his rally at the New Englander in Lawrence County, where he stopped by bus Tuesday afternoon. 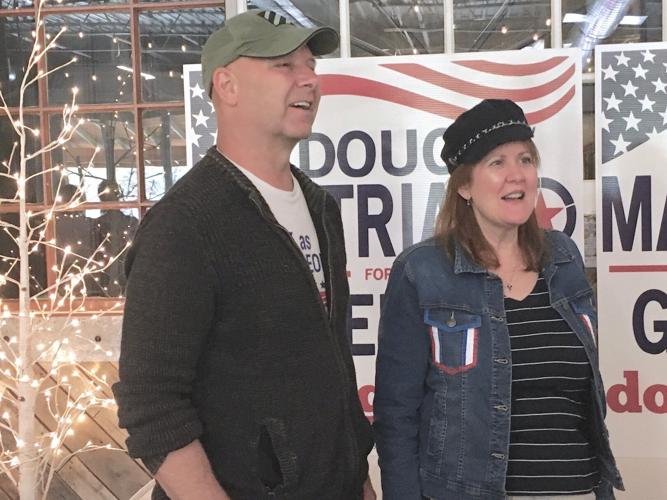 Governor candidate Doug Mastriano greets prospective voters Tuesday with his wife, Ribbi, at a rally at the New Englander.

Doug Mastriano chats with a woman in attendance at his rally at the New Englander in Lawrence County, where he stopped by bus Tuesday afternoon.

Governor candidate Doug Mastriano greets prospective voters Tuesday with his wife, Ribbi, at a rally at the New Englander.

The visit was one of 18 stops on his Freedom Tour across Pennsylvania as part of his campaign for the May 17 primary election. He was hosted at the banquet center by Gale E. Measel Jr., former Republican Party chairman, who organized a rally on his behalf. Before his Lawrence County stop, Mastriano was cheered on at Cheeseman Farms in Portersville, Butler County.

Mastriano, a state senator from Franklin County who leads in the polls, is one of nine candidates on the Republican ballot for governor of Pennsylvania. Running against him are Lou Barletta of Luzerne County, Nche Zama of Northampton County, Dave White of Delaware County, Melissa Hart of Allegheny County, Bill McSwain of Chester County, Charlie Gerow of Cumberland County, Joe Gale of Montgomery County and Jake Corman of Centre County.

Mastriano, accompanied by his wife, Ribbi, stopped briefly outside of the banquet center building and expounded on his stand regarding Roe v. Wade and the state's gasoline tax, hot button issues in the state race.

“I believe strongly in following science,” he said on the subject of abortion. “What we do know scientifically is that baby in the womb is a distinct individual — it's not a clump of tissue. The argument, it's 60-year-old science, is we know that's a distinct individual with a distinct DNA. That baby deserves a right to life, whether it was conceived in incest, rape or whether there are concerns otherwise for the mom.

Kathy Barnette, a Republican candidate for U.S. Senate, was conceived when her mother was 11 years old, as a result of rape, Mastriano said. “I look at Kathy as a strong voice in Pennsylvania and a U.S. veteran and somebody who's contributed so much. By this exception rule we've been going by, she shouldn't be here. I'm thanking God that her mom, really her grandma, chose life and gave her a chance.”

“So I stand strongly with the right of every baby to live,” he said. "Ronald Reagan warned us in his book in 1980, "Abortion and the Conscience of the Nation," that if abortion continued unlimited in America, there would be a time when even elderly would be cast aside. We saw during COVID that exactly happened, 16,000 dead as a result of asinine policies of (Gov. Tom) Wolf and (former Health Secretary Dr. Rachel) Levine.”

On the gasoline tax, Mastriano commented the tax has inflated gas prices statewide.

The result of the tax is that the state's bridges and roads are supposed to be fixed with that money, he said, according to 2013 legislation.

"The gas tax money needs to go to roads and bridges, not siphoned off to other purposes," he said, adding, gambling was brought in to help lower property taxes, although he said that wasn't working out well.

Energy overall in the state should be cheap, he said, because Pennsylvania is the No. 3 producer overall of energy, No. 2 of natural gas and No. 1 of coal.

He vows that on Day 1 if he is elected, he will remove the Regional Greenhouse Gas Initiative or RGGI, which is a market-based program Pennsylvania joined under the direction of Wolf.

"We have to pay for CO2 emissions," Mastriano said. "Pennsylvania is the only state of the 10 regional compact that produces energy, and it's going to drive up our costs by 30 percent this year. That's another $461 million in taxes and costs and fees for people."

Mastriano said because Wolf joined without a vote in the state House or Senate, he can remove Pennsylvania from the pact in the same unilateral fashion.