CEO of Sharon company out after saying racial slurs on video 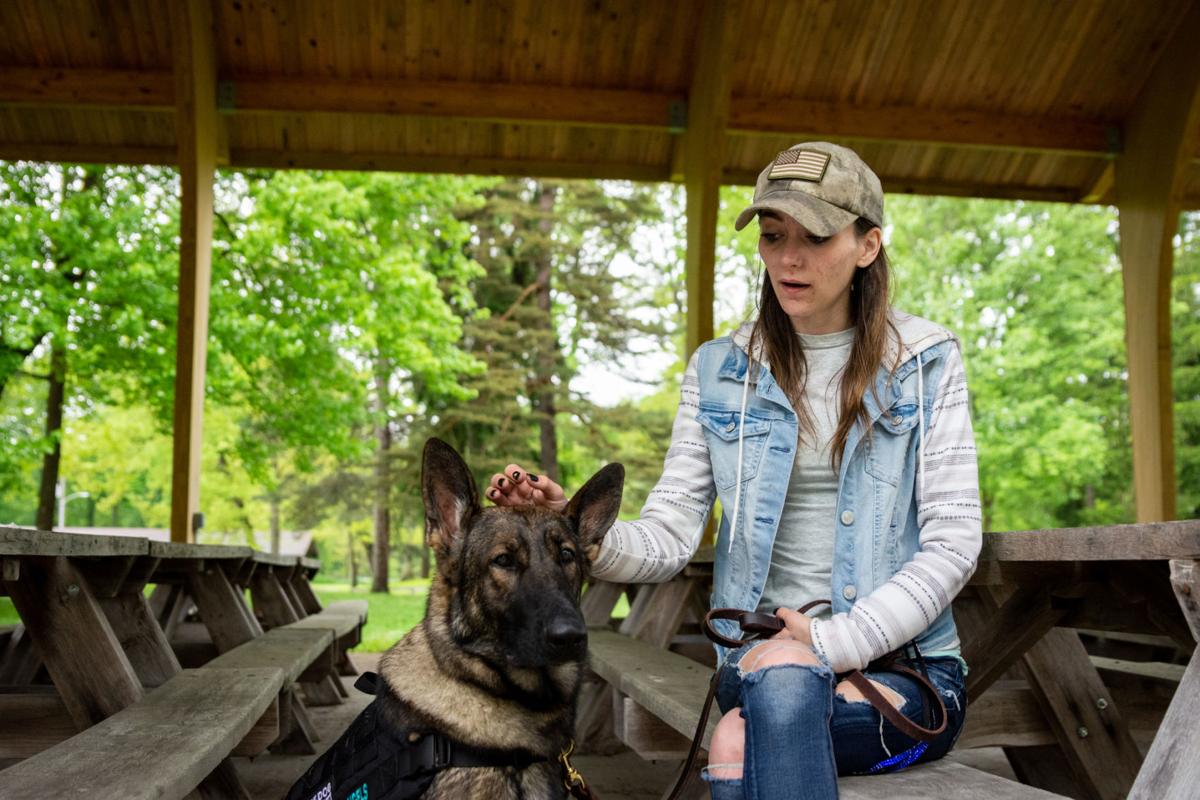 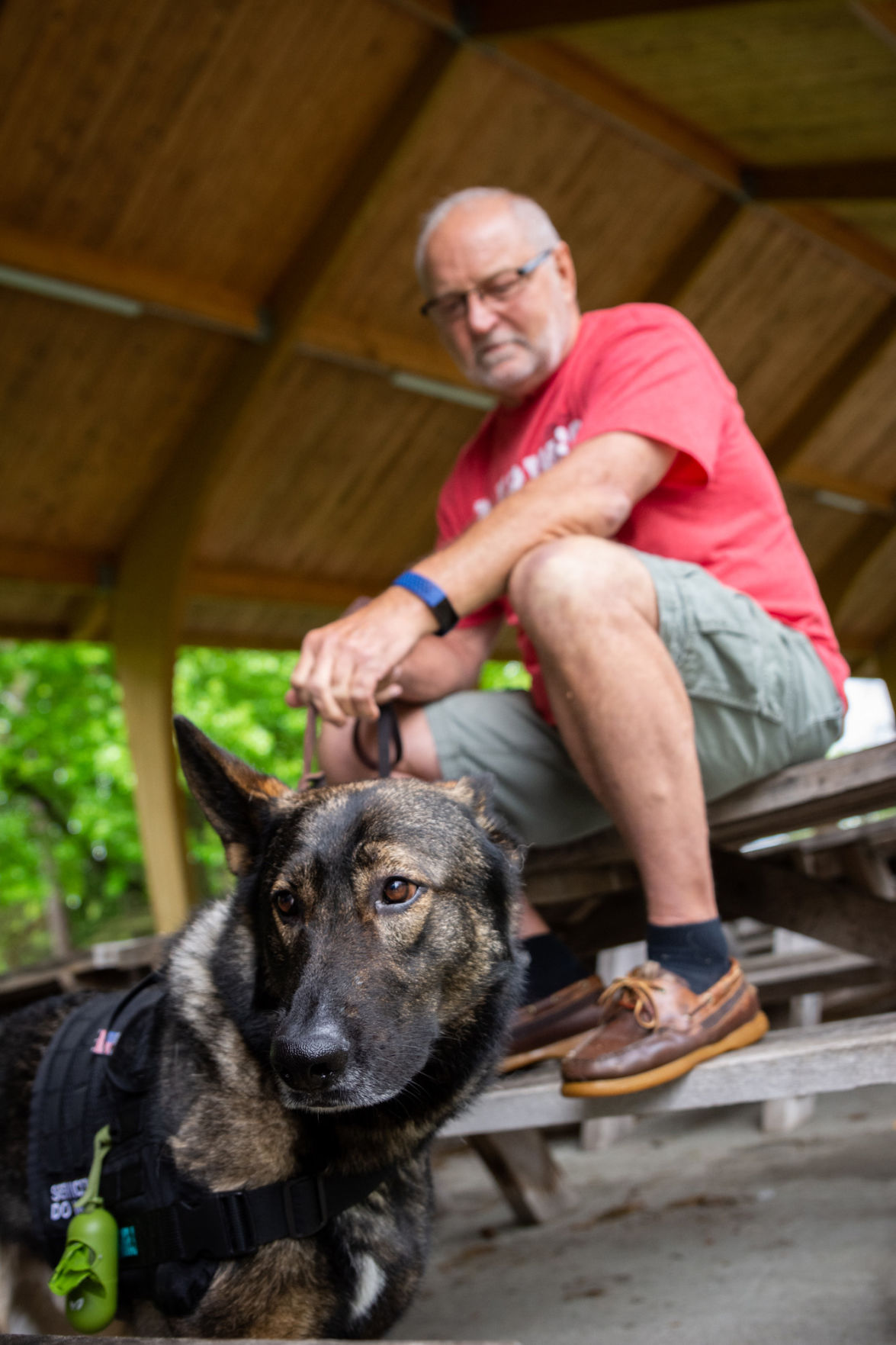 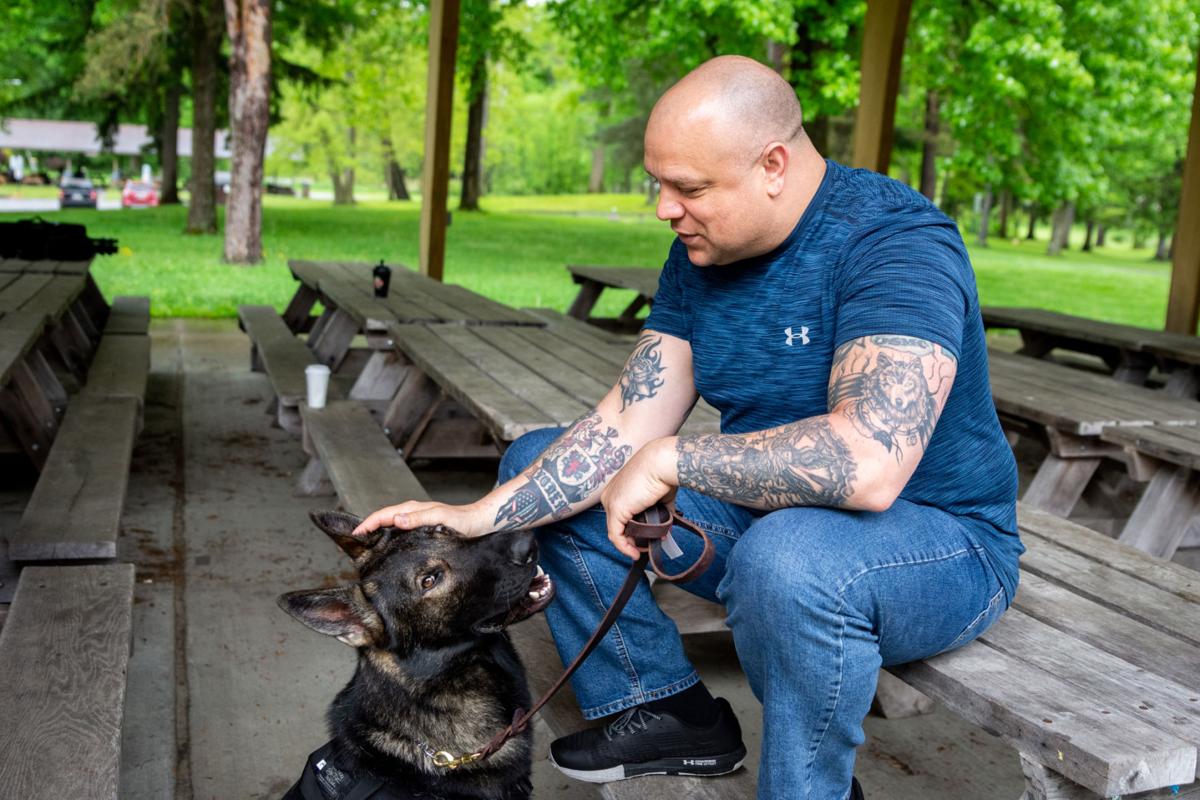 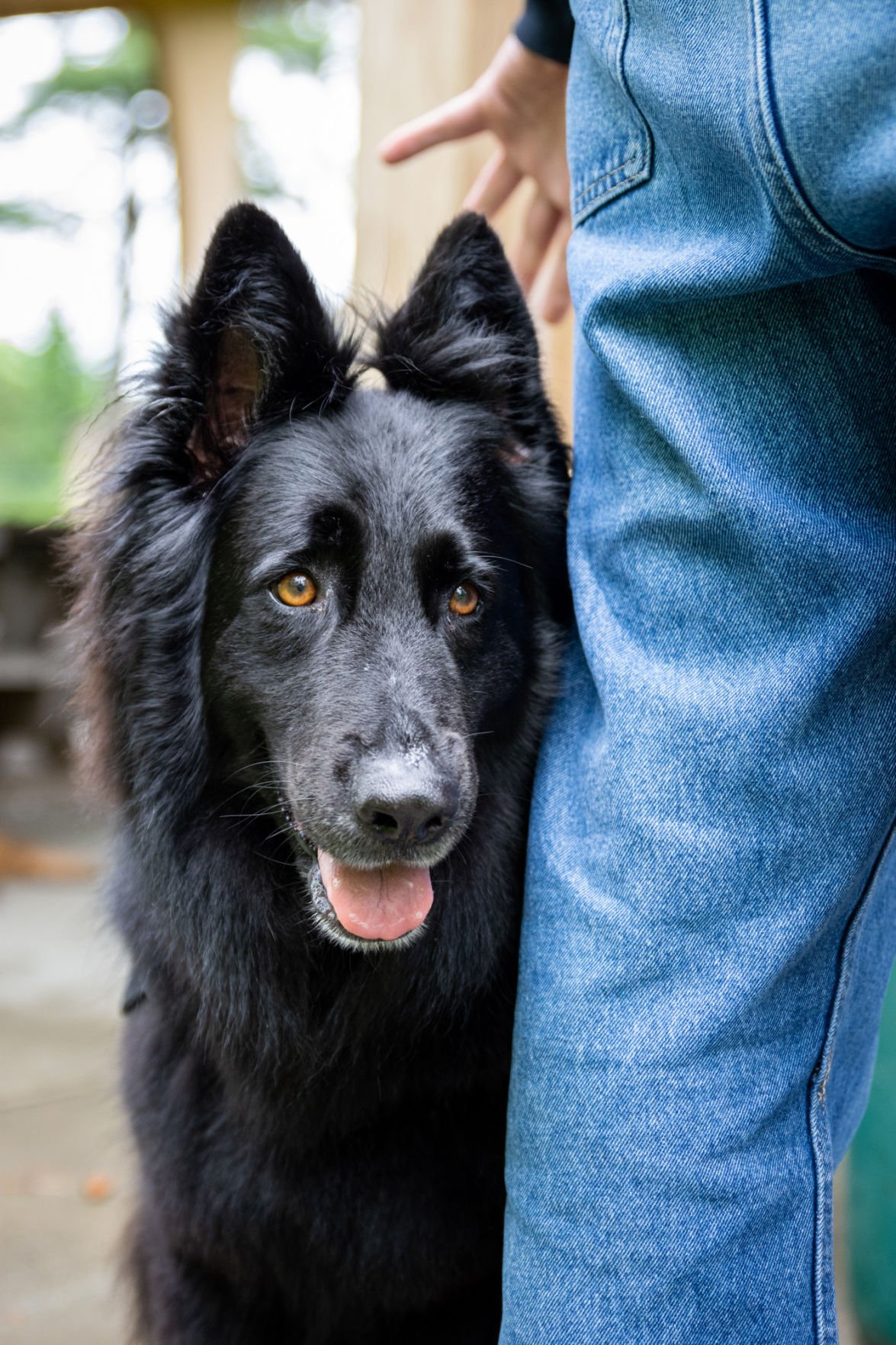 Foxy wraps herself around the legs of Marine veteran Craig Hodgkins, of Scott Township, Thursday at Memorial Park in Grove City during a Guardian Angels Service Dogs event. 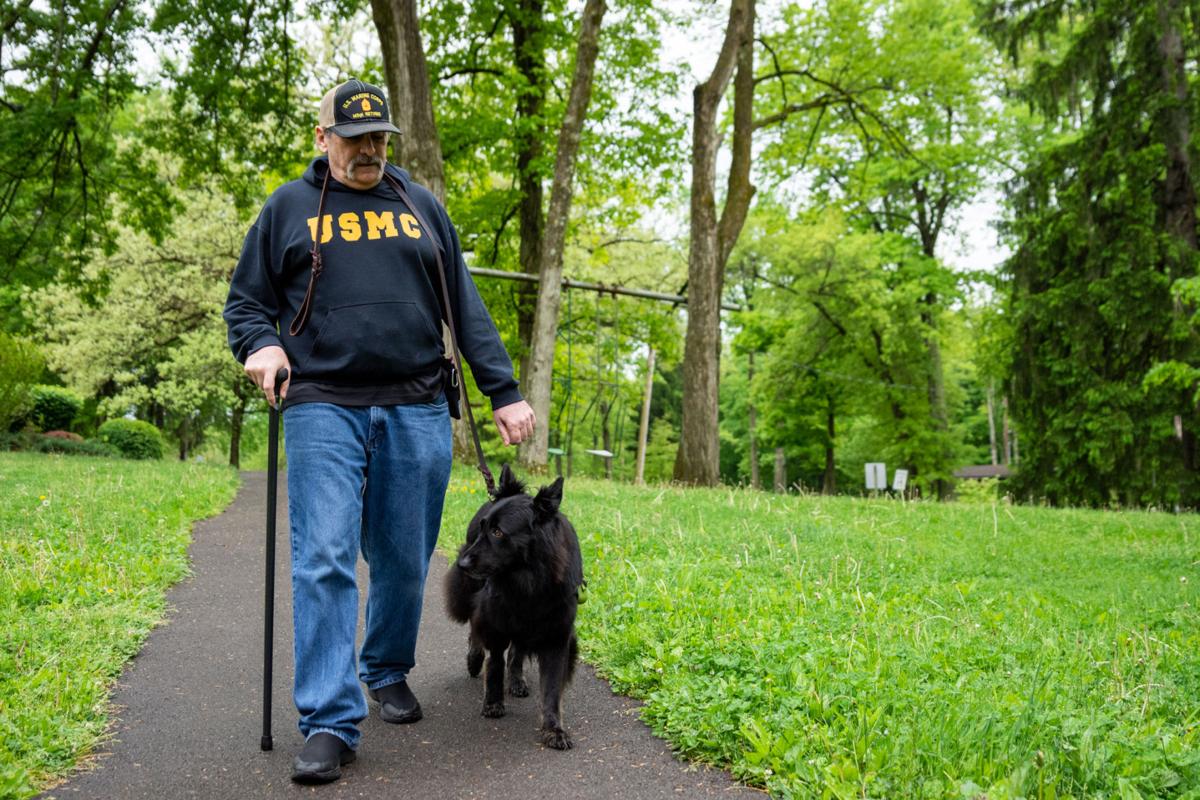 GROVE CITY – Craig Hodgkins and his medical service dog Foxy have been together just a few days, but the Pittsburgh man said he already feels like it’s been a life-changing experience.

And a life-saving one.

On Thursday at Memorial Park in Grove City, Foxy, a long-haired German shepherd, leaned up against Hodgkins. The dog studied the man’s face, and sensed emotion.

That’s what Foxy was trained to do.

Hodgkins was one of five people who received a service dog this week through Guardian Angels Medical Service Dogs, a nonprofit agency based in Williston, Fla.

The organization, founded about 10 years ago, has paired more than 350 dogs with veterans, first responders, and people with disabilities.

Service dogs are sponsored by businesses and other organizations, so there is no cost to the recipients, said Joanne Werner, a traveling trainer.

The trainers had planned to bring the dogs and their new humans together in March in Florida, but the COVID-19 pandemic forced organizers to make other arrangements, so the group came to Mercer County.

The trainers introduced the dogs to their humans this week at the Avenue of 444 Flags in Hermitage and the pairs have been together ever since.

Over the past several days, the dogs and their recipients have undergone training, learned about each other, and visited businesses so they both could get a feel for what it’s like to be in public together.

The recipients said their dogs are great matches and they couldn’t wait to to head home with their new best friends.

“He’s a lot like me ... I’m very, very happy,” said Ryan Yoder of Harrisburg about Rikki, his service dog.

He’s been calling the 1-year-old German shepherd “Rik,” and said he feels like they already share a special bond.

Yoder, who served in the Marine Corps for four years, is veterans coordinator for the Pennsylvania Department of Corrections.

He learned about Guardian Angels through his state post and learned that medical service dogs can provide assistance to veterans, especially those living with disabilities and post-traumatic stress disorder.

Yoder said he was excited to meet his new buddy, and looks forward to bringing Rik home to meet his wife and kids.

Rik is trained to help with anxiety and post-traumatic stress disorder. Yoder credited the organization and Carol Borden, Guardian Angels founder and chief executive officer, for its work.

Guardian Angels is sending the recipients home with supplies, including dog food, and prevention treatments for fleas, ticks and heartworm.

Hodgkins served 21 years in the Marines. He said 5-year-old Foxy is calm and reassuring, which helps with balance and anxiety issues.

Hodgkins said he has always loved dogs – he’s had several Great Danes. But after a doctor recommended a service dog, he said Foxy came into his life at just the right time.

He was in a “low place,” and having Foxy has made him feel comfortable for the first time in many years.

Jim Grossman of Hermitage, who served in the Marines, heard about the organization from his counselor.

He said he was a little uncertain about the idea at first, but he’s now glad he decided to apply.

“He’s very calming to me. We just seem to click,” said Grossman, commander of Veterans of Foreign Wars Post 5286 in Farrell, as he looked at 4-year-old Judd.

Alexis Taggart of Philadelphia, who served in the Army from 2011 to 2016, spent quite a bit of time researching service dogs.

The Guardian Angels application process is long and includes a background check, but she said the wait was worth it.

“I cried my eyes out,” she said of her first meeting with Doc, a female German shepherd who is almost 2.

They have a really strong bond, and Doc helps her with panic attacks – like she has a sixth sense, said Taggart, who is studying to earn a doctorate degree in psychology.

Jay Cox of Charlotte, N.C., is retired, having worked in diplomatic security for the U.S. Department of State and as a police officer in Maryland.

Cox worked in special weapons and tactics, and as a detective, investigating homicides, kidnapping and serial murder – what he called “the absolute worst of society.”

And it affected him, he said.

Cox was seriously injured in the line of duty. During a hostage situation, another officer detonated a flash-bang grenade near Cox’s head, which left him with a traumatic brain injury.

Someone recommended a service dog, and his daughter Carly Cox, whom he calls a “hero,” helped him with the application. Cox said he prospect of getting a dog gave him something to look forward to.

“This is the first thing I’ve been excited about,” he said.

He’s excited to go home to his wife with Whaler, a German shepherd who helps him with PTSD.

The dog is intense and strong-willed, and he has already helped Cox deal with nightmares by jumping into bed at night and redirecting his attention.

“He broke that loop. I couldn’t believe it,” Cox said.

Sponsors of the dog were PNC for Whaler, Yellow Ribbon Fund for Rik, Armstrong for Judd, and the Colcom Foundation for Foxy and Doc.

Training a medical service dog can take up to two years, and the organization looks for dogs with low or medium energy and are willing to learn and work, Werner said.

The organization itself owns the dogs, and the recipients sign a contract that imposes conditions including getting the dog established with a veterinarian and securing pet insurance.

Guardian Angels Medical Service Dogs checks in on the dogs to make sure things are going well. The organization plans to open a second facility, in Moon Township, Werner said.

She also works with inmates at the State Correctional Institution at Mercer in Findley Township. The inmates are veterans, and she teaches them how to train the service dogs.

A lot of thought goes into pairing dogs with recipients, and that first meeting is always a tearjerker.