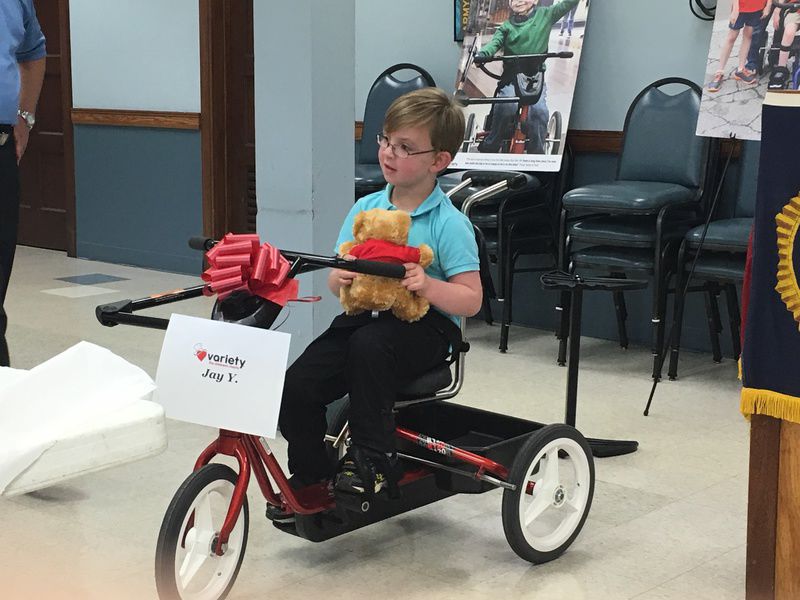 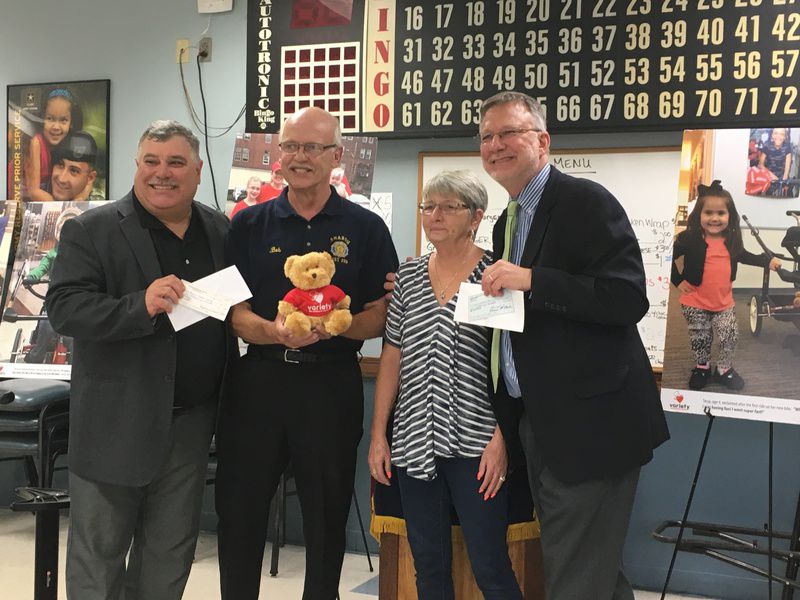 They were there as part of a presentation by Variety the Children’s Charity.

But this day was not just important because of the story Variety Pittsburgh’s chief executive officer Charlie LaVallee was telling about how donations and volunteers are changing lives.

And the excitement in the room was not just about the $12,600 the Legion and its Ladies’ Auxiliary donated to the group to help more children.

Jay, Joseph and Sean were waiting for their chance to put on their helmets and to take a spin on their brand new bikes – for the very first time.

It was a sight their parents and guardians thought they would never see. The $1,800 adaptive bicycles would allow the boys to do what other children do.

And there were lots of smiles and a few tears shed as they joyously pedaled around the room.

But his physical challenges don’t stop him, his nurse Karen Wilcox says, or dampen his spirits.

And after Jay put on his Paw Patrol helmet and got strapped into his little red bike, the smile on his face said it all.

“Happy!” he shouted, when he was asked how he felt after his first-ever ride.

But his excitement and happy outlook on life are nothing new to his dad and to Wilcox. They know he is special.

“He is happy no matter what,” she said. “He always has a smile on his face.”

After he was finished with his ride, Jay made sure to go around and share hugs with all those who made his bike trip possible.

“Thank you,” he told each one.

But before he did, he made sure that the parade paused while one of the boys finished putting on his helmet.

His mom, Robin Luca, and her friend, Don White, were not surprised.

“He is very caring and very sensitive,” Luca said.

Robin said she thought she would never see her autistic son on a bike.

“We are so grateful,” she said.

Joseph, who donned a spikey helmet he picked out, summed up the ride as “awesome” and “very cool.”

His mom said the bike will not be just for outdoor exercise. In the winter, she said, she will mount it to its stand and allow her son to pedal the stationary bike while he watches television.

“It will help him get the exercise he needs,” she said. “It is not always easy with these kids.”

For Sean Miller of Mercer, who is 10, the chance to have a bike of his own was a thrill.

His severe autism makes it hard for his father, Jim, and his family and caregivers to keep him focused and occupied.

His new bike will give Sean a freedom he has not experienced before, Miller said.

And best of all, it will give this dad a chance to enjoy an activity with his son.

“I bought a bike, too, so we can ride together,” he said.

And that is exactly what Variety hopes to accomplish with its My Bike program – independence and freedom, LaVallee said.

“Our goal is to empower our kids to have the fullest, richest life they can,” he said.

Since the program’s inception in 2012, 1,200 children have received the bicycles free of charge.

The cost, $1,800 each, is paid through sponsorships from organizations, individuals and businesses.

“It is not a lot of money to change a child’s life,” LaVallee said.

But bicycles are not all that Variety provides. The group also has My Stroller and My Voice programs.

The strollers, which are special lightweight versions of the wheelchairs that are required for severely disabled children, allow the portability that makes it possible for the children to travel and to be part of family activities.

My Voice is a communication device that allows a child who cannot speak to touch an image on a special keyboard, which is then translated into an artificial voice.

The devices allow the children to communicate to their family members something as simple as indicating whether he or she is hungry or has to go to the bathroom to sentences and phrases to express thoughts and feelings.

“You cannot imagine how much it means to these parents to be able to hear their child say, ‘I love you,’” LaVallee said.

Variety works hard to get its message out. Many people don’t realize that the club, which has 40 chapters throughout the U.S., actually does this work.

“They know Variety as the club for entertainers,” LaVallee said. “They have heard of us, but they do not know what we do.”

Variety’s goal is to get as many bikes, strollers and communication devices into the hands of as many children as possible, he said.

And with the help of donations like the one the Legion offered this week, more children will get the chance.

Many people think it is difficult to get a bike – or that they will not qualify.

“People always ask me, ‘What’s the catch?’ and I always tell them, ‘There is none,’ “ LaVallee said.

All families have to do is fill out an application online at www.varietypittsburgh.org or call Variety’s main office at 724-933-0460. He encourages families in Mercer and surrounding counties to apply.

LaVallee said he understands that families with disabled children face many, many hidden expenses.

That’s why, he said, the organization has such liberal income requirements.

“One mother told me that the payments on her adapted van were more than her mortgage,” he said.

The program is serving 50 counties in Pennsylvania and is looking to continue to expand to reach as many children as possible, LaVallee said.

It was an easy decision for the Legion to get on board with the program – and to recommend a donation to its membership, post Commander Bob Calvin said.

“It’s our mission – veterans, our community, kids,” Calvin said. “When I told the membership what I had seen, there were no ifs, ands or buts. They said do it.”

And after watching the boys pedal their new bikes around the post, and cheering them on while wiping away a tear or two, the veterans and auxiliary members said the donation was repaid many times over by the expressions on the faces of the riders.

“Anything for the kids,” Calvin said.