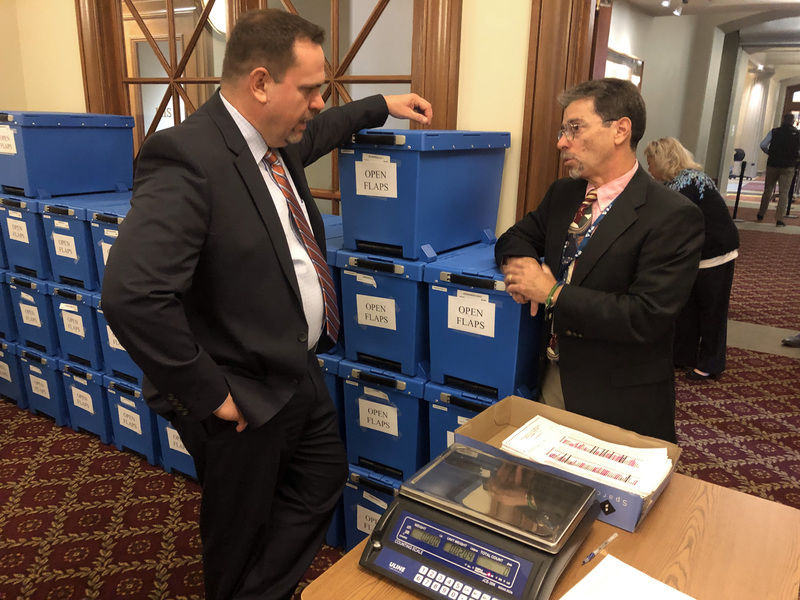 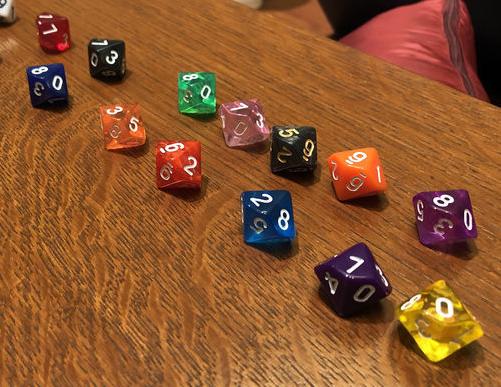 Multi-colored, 10-sided dice sit on a table in the Mercer County Courthouse assembly room. The dice were used to generate random numbers to select county ballots for the audit. 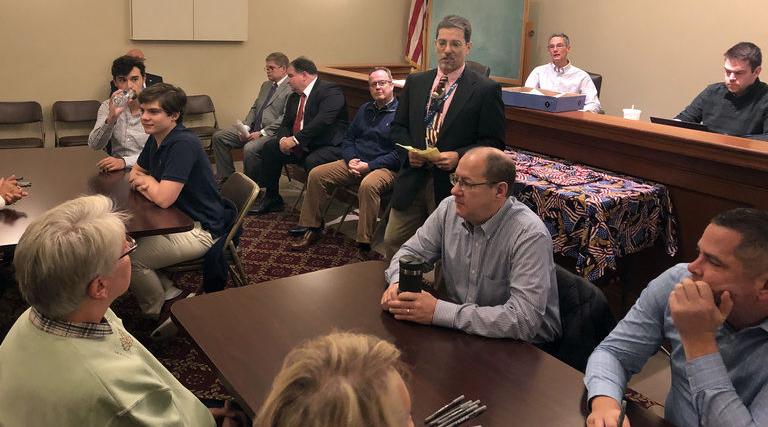 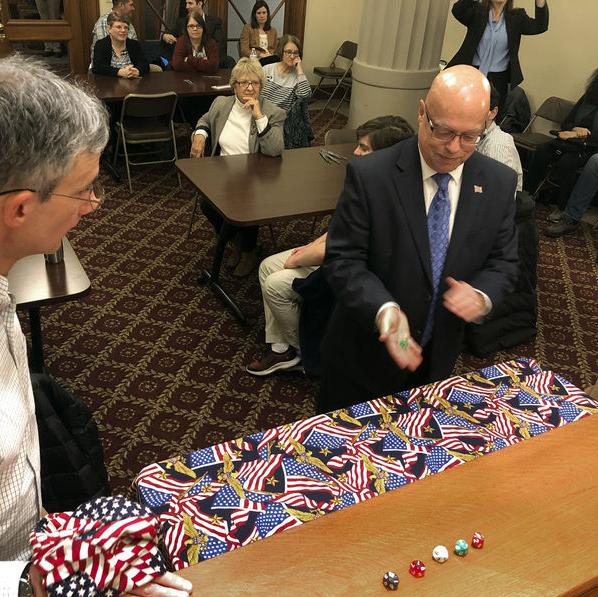 Mercer County Common Pleas Court Judge Daniel Wallace leads participants in the risk-limiting audit in an oath. Under the law, anyone handling ballots from the Nov. 5 election were required to take the oath.

MERCER — Before employing a complicated statistical, math-based formula to determine which of Mercer County’s 23,662 election ballots to use Monday in a post-election audit, Mark Lindeman used a decidedly low-tech random number generator.

Matt Bernhard, a computer science student from the University of Michigan who assisted Verified Voting and Voting Works on setting up the audit, said computers aren’t very good at generating truly random numbers.

And neither are humans.

And the auditors needed a truly random listing.

Mercer County performed a pilot-program risk-limiting audit Monday on the Nov. 5 general municipal election. The audit was intended to verify that the ballot results match the counts from election night and determine that the county’s process is secure.

“Being able to demonstrate after the fact to show voters that they can trust the results is very important,” said Jonathan Marks, Pennsylvania’s deputy secretary of state for elections.

Marks was among several election officials from throughout the state and nation Monday who were in Mercer County to execute the audit. Philadelphia-based Verified Voting and VotingWorks of San Francisco led the session, which also included the Pennsylvania Department of State, U.S. Election Assistance Commission, University of Michigan, Democracy Fund, Common Cause Pennsylvania, the Brennan Center for Justice at New York University School of Law and George Washington University.

Mercer is, along with Philadelphia, one of two counties in the state to participate in the pilot program. Under the legal agreement that ended a lawsuit by 2016 independent presidential candidate Jill Stein, Pennsylvania will expand the risk-limiting audit to all 67 counties by 2022.

In a risk-limiting audit, examiners use a small sample of ballots to verify the accuracy and security of election-night return counts. The ballots are selected by use of an open-source computer program called “Arlo,” which uses statistical mathematical principles, similar to those used by polling services to select participants in polls.

Monica Childers of VotingWorks said the purpose of a risk-limiting audit is to determine that the outcome is accurate, not to replace hand counts in determining the winner.

“With risk-limiting audits, we can shrink the process to a manageable level to where it’s practical to do after every single election,” she said.

In Monday’s audit, the counters — including election officials from Elk, Allegheny and Westmoreland counties — examined a single race, the Marsy’s Law constitutional amendment referendum, on 80 ballots.

About 74 percent of Pennsylvania voters supported Marsy’s Law, a proposed constitutional amendment that would provide rights to crime victims and their families. The amendment’s fate is pending a court decision.

If the pilot audit was done correctly and the election night count accurately reflected the result, about 74 percent of the ballots reviewed would have been “yes” votes for Marsy’s Law.

The actual outcome was 73 percent — of the 80 ballots examined, 49 were votes in favor of Marsy’s Law and 18 votes against. The remaining voters did not make a choice on the proposed amendment.

Jeff Greenburg, director of Mercer County’s election and voter registration bureau, said the county learned some lessons from Monday’s experience — chiefly that moving ballots from the county’s warehouse to the courthouse for all 90 of the county’s voting districts is a daunting task. In future audits, the county might use a different process.

But overall, he said the audit went well, and Mercer County passed the test.

“The evidence shows that the results were accurate for that race,” Greenburg said. “It’s devised to give you confidence that the outcome was accurately reported.”