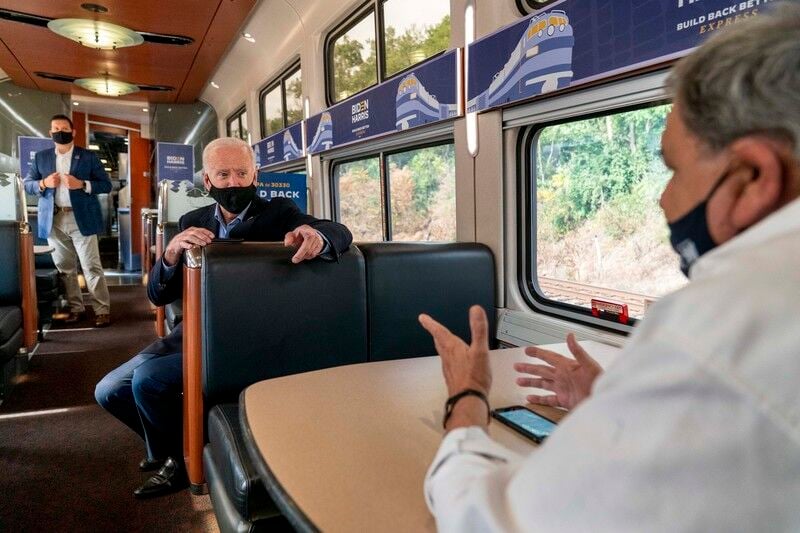 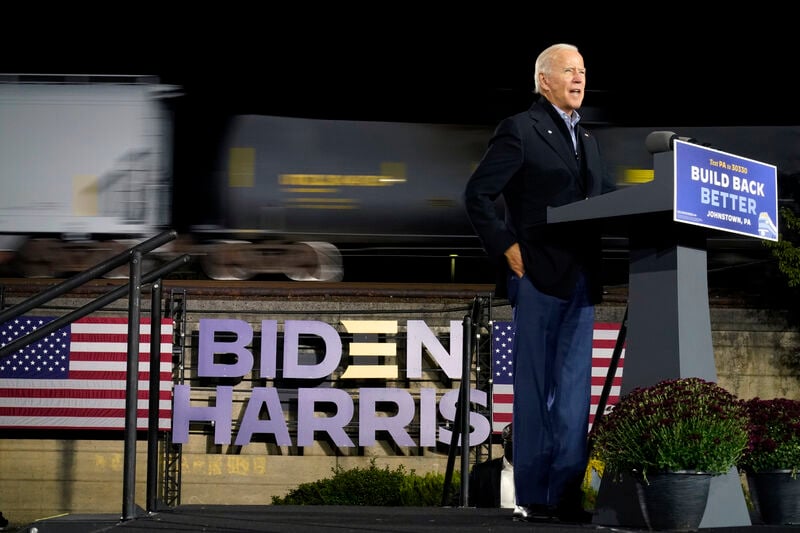 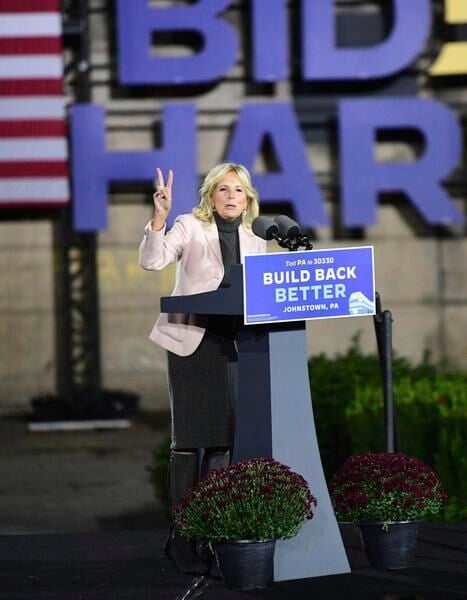 JOHNSTOWN, Pa. – Former Vice President Joe Biden, the Democratic Party’s presidential nominee, compared his working-class childhood in Scranton and the days when he was known as possibly the poorest member of the U.S. Senate to the policies of President Donald Trump that he believes benefit the wealthiest Americans when speaking at the Johnstown train station on Wednesday night.

Biden made his remarks during a seven-town “Build Back Better Express” whistle-stop tour through Ohio and Pennsylvania that started in Cleveland and included stops in Alliance, Ohio, and in Pittsburgh, Greensburg, New Alexandria and Latrobe.

Biden, who earlier in the day announced he was endorsed by the International Union of Operating Engineers and the United Brotherhood of Carpenters and Joiners of America, also offered his support for organized labor. He was introduced by local Service Employees International Union shop steward Brian Smith.

“I heard from union members who’ve gotten a raw deal so many times, and so many more at every stop that I’ve made,” Biden said, “just hard-working people like all of you, folks who played by the rules, paid their fair share their whole lives, folks who never asked for a single thing to be given to them, just a chance to earn it.

“Folks, there couldn’t have been a more stark difference from what I saw last night on that debate stage, a self-entitled, self-serving president who thinks everything is about him. He thinks that if he can just yell louder and louder, throws out lie after lie after lie, he’ll get his way. He thinks you’ll forget. Well he picked the wrong guy.”

Later in the half-hour speech, Biden told the crowd that was socially distanced as part of COVID-19 guidelines, that “I promise you this, I see you. I hear you. I respect you. I grew up with you. And the families of those more than 200,000 Americans who have died in this pandemic will be heard and respected by me.”

Biden said the pandemic needs to be gotten “under control so we can get our economy working again and everyone get back our lives.”

“We’re a nation in pain right now, so many empty chairs around the dining room table tonight because somebody’s been lost to the pandemic,” Biden said.

‘All on the line’

Democrats along the tour route offered their support for Biden both at the live stops and when issuing statements throughout the day.

His wife Jill Biden, who grew up in a Philadelphia suburb, and Pennsylvania Lt. Gov. John Fetterman spoke at the Johnstown event.

“Empathy, compassion, health care, environment, the union way of life, all the things that Vice President Biden stands for, it’s all on the line,” Fetterman said. “The most consequential election of our lives.”

Just like in 2016, the presidential candidates and their surrogates have paid frequent visits to western Pennsylvania, including Johnstown, so far during this general election cycle.

“I think we’ve learned from the 2016 election that it’s not just the big city,” Johnstown Mayor Frank Janakovic, a Democrat, said. “We’ve found that the vote has become very important in the rural areas. I think the candidates are taking notice to that, so they’re making sure that they’re just not politicking in the larger cities, but they’re getting out to the suburbs or rural areas where a lot of people live and work.”

Janakovic said he encourages “Biden and any and all the candidates to visit towns like Johnstown to make sure that we’re not forgotten in the big picture and that they’re really thinking about and helping and will support cities like Johnstown after the election.”

Trump and the 2016 Democratic nominee, former Secretary of State Hillary Clinton, held campaign events in the city four years ago.

This time around, both Biden and Trump have spoken in the Pittsburgh region within the past few weeks. Trump also gave speeches at Arnold Palmer Regional Airport and Flight 93 National Memorial. Biden visited Flight 93 and the Shanksville Volunteer Fire Department on Sept. 11

“President Trump has delivered on the promises that he made to us,” Joyce said during a telephone interview before the rally. “Under President Trump, energy independence has been achieved for the first time in my lifetime in America. President Trump defended our Constitutional rights. He cut taxes for Pennsylvania families. And, something very important in today’s world, President Trump stands by our police. He supports those who put on their uniform every single day to protect us.”

Regarding the previous night’s debate, Joyce felt “that Joe Biden showed that he is beholden to the radical left.”

Many Democrats took the comment as support for the Proud Boys, a neo-fascist organization of white men.

“I think he didn’t answer the question completely,” Thompson said when speaking with The Tribune-Democrat editorial board during a Zoom meeting. “But, quite frankly, if you listen to him, he doesn’t have time for white nationalists.”

Thompson said, in his opinion, Trump is inclusive when addressing issues.

“I work very closely with the president, actually,” Thompson said. “It’s great to have a president who is interested in reaching across the aisle. Most times when I’ve been in the White House, I’ve been in bipartisan company. I find that whether it’s being in the Oval Office or sitting in the cabinet room with the president that he’s not really interested in labels. He just wants to get things done for the American people.

“He is certainly unconventional and not really coming out of the political world. He certainly has his own style of communication. Like him or not like him, it’s just who he is. I’ve really appreciated the opportunity to work with the president.”