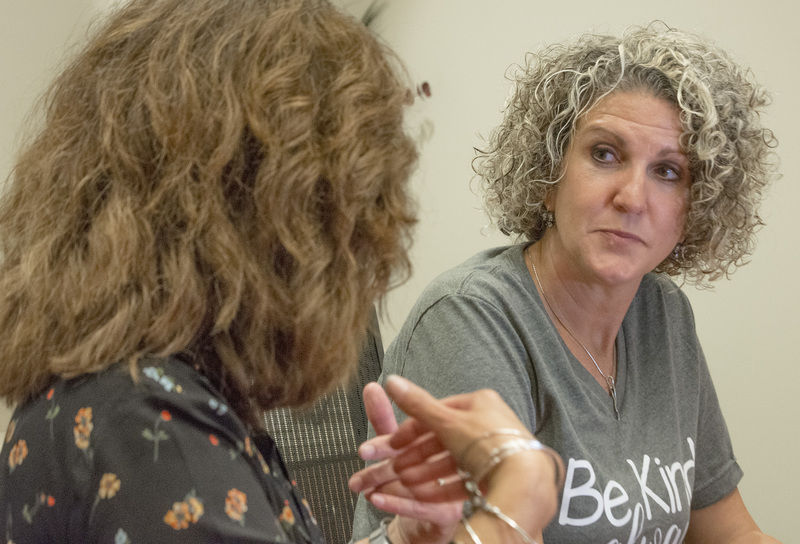 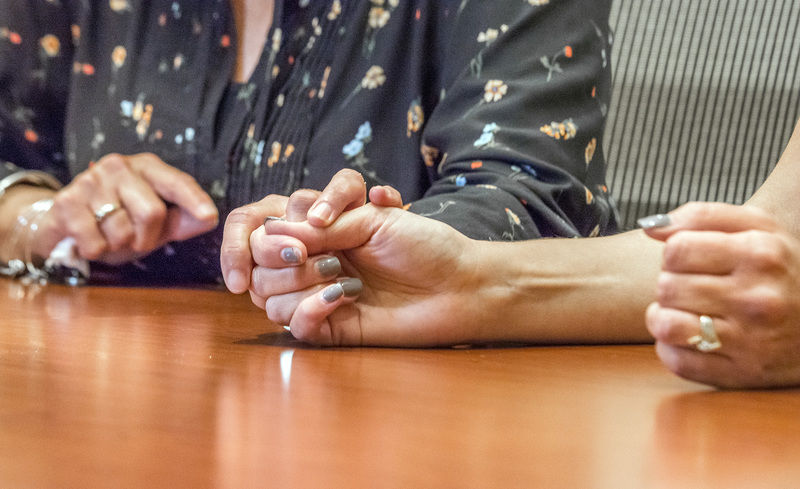 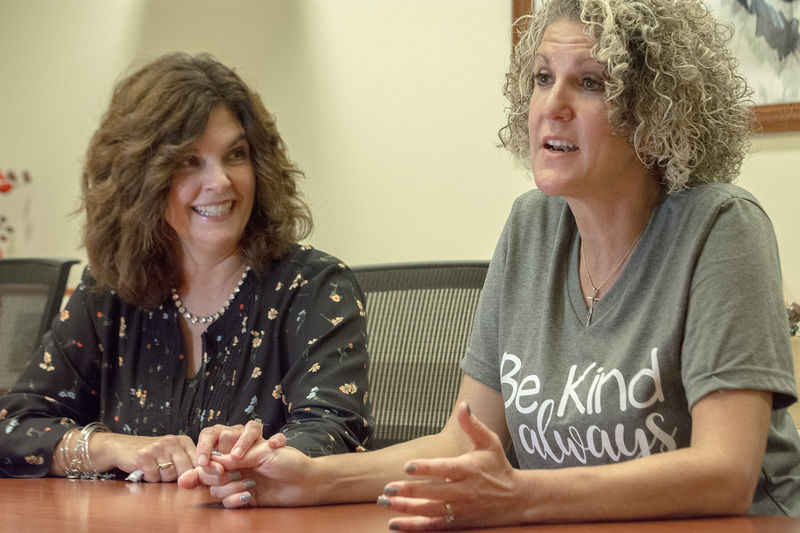 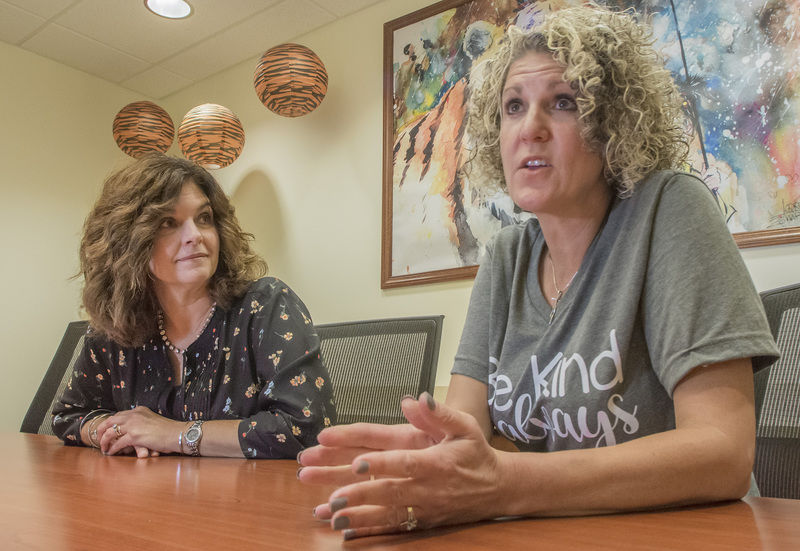 CORY BYKNISH | HeraldDee Wiesen, left, and Diane Romo, first grade teachers at Case Avenue Elementary School, are best friends. They were able to lean on each other as they went through the steps leading up to and after undergoing a lumpectomy.

CORY BYKNISH | HeraldDee Wiesen, left, and Diane Romo, first grade teachers at Case Avenue Elementary School, are best friends. They were able to lean on each other as they went through the steps leading up to and after undergoing a lumpectomy.

But the one thing they never wanted to share was breast cancer.

When she was getting her biopsy, Dee was told that eight of ten of those biopsies come back negative,” Dee said.

And out of ten people, best friends Dee and Diane were the two positives.

The doctor requested a second screening. Afterward, she was taken into a room she had never been in before.

“They said they saw something on it that didn’t look right,” Dee said. “They said, ‘We need to do a needle biopsy because we found a couple things on here that weren’t on your last one.’”

So the technicians asked Dee if she had plans for the weekend. It happened to be quite a busy one for her, as her family was closing on a new house and her son was playing in a state baseball tournament.

So they scheduled her biopsy for the next day.

“And so I went and had the biopsy done but then you don’t find out right away, so you have to wait,” Dee said.

She only waited three or four days. The biopsy came back positive.

“But when I was at the needle biopsy, they showed me the mammogram, and it looked like somebody took a pin and dipped it in white paint and went like this,” Diane said, and tapped a few times on the table, indicating small dots. “So it wasn’t like a lump you would have felt on a breast exam, it was in the milk duct. Just these tiny little dots.”

Diane was the only person, save her husband, Bill, that Dee told.

“I started reading and she was like, ‘Oh my gosh stop reading,’ because I was freaking out,” Dee said about Diane.

“For that three-week time frame, you don’t know,” Dee said. “So I’m closing on a house, I’m going to watch my son play baseball and I’m doing all this thinking, ‘This might be it. It might be the last time I watch him play baseball.’ It was all-stars and it was such a fun time.”

Dee was handed off to the surgeon in Cranberry, just north of Pittsburgh.

“I went to see the doctor and the first thing she said when she walked into the room was, ‘You are not going to die from this,’” Dee said. “At that point, I needed somebody to say that to me because I didn’t know what I was in for.’”

On the same day, Diane, 49, a married mother of two, her children are now 21 and 16, went for her yearly mammogram.

“(Dee’s) going to the surgeon in Cranberry and I know she’s there so I’m on call, ready to answer the phone, whatever the surgeon says,” Diane said. “I go for my mammogram. And they say, ‘We need to take more pictures. We see something that doesn’t look quite right.’”

“And I’m thinking, ‘I’ve heard this story before,’” Diane said. “So I call (Dee) back and I say, ‘They said I have to come back. They said they saw something weird. They said they saw a calcification.’ All the same words that they had already told (Dee). All the stuff I told her not to look up, I had looked up, so I know what they’re talking about.”

So, after another mammogram, Diane is sent for a needle biopsy.

Dee laughed as Diane talked about all the different rooms the pair discovered at places they went for check-ups and mammograms year after year.

“You go there every year and it’s the same room, it’s the same routine: you go back, you go to the room where the mammogram is, you go change your clothes,” Diane said. “Suddenly, there’s all these rooms you didn’t know about.”

Dee giggles as Diane talks about the rooms.

They both agreed that they’d rather not see all the fancy rooms.

Next, Diane waited at home for her obstetrics/gynecology physician’s call.

On the same day, Dee went to the surgeon in Cranberry to have a radioactive seed put in her, which is done before the lumpectomy.

“And remember, I had gone by myself, and you were home and I called you and I said, ‘I don’t think this was a good idea,’” Dee said to Diane.

“So I’m yelling at her and in the meantime, my phone’s ringing – it’s (the doctor’s) office,” Diane said.

And she heads to her doctor’s office with her husband, Kenny.

If there was any breast cancer to have, this was the best case scenario, Diane was told.

“And that was helpful because I’m thinking, ‘They didn’t all talk to each other,’” she said.

Next, the women had to decide whether or not to take the BRCA Gene test.

BRCA1 and BRCA2 (BReast CAncer genes 1 and 2) are the best-known genes linked to breast cancer risk. Everyone has these genes, but some people have an inherited mutation in one or both that increases the risk of breast cancer. BRCA1/2 mutations can be passed to children from either parent and can affect the risk of cancers in both women and men, according to the Susan G. Komen breast cancer research website.

So, the consideration was to find out if their children were at an increased risk for developing cancer.

Both women have two sons. Dee’s mother had a different kind of breast cancer than hers, and there is a family history of cancer on both sides of her family. No one in Diane’s family has had breast cancer, but she has family members who have had other forms of cancer.

The pair had different surgeons who worked in the same office, but Dee’s surgeon said she did not need to have the test. Diane’s surgeon recommended she take the test.

“I’m freaking out thinking, ‘Why?’” Dee said. “Because if you do test positive for the BRCA gene, then they recommend a mastectomy because the likelihood of you getting it again is 50 percent higher.”

So Diane had the testing, which postponed her surgery.

• The clock is ticking •

“We’re on a timeline here because school is starting,” Diane said. “There’s no time, we have to have it done immediately.”

But Diane was told to wait, to think about herself. It would be a completely different surgery if she carried the mutation gene.

“That was very difficult to do at the time because you’re thinking, ‘I’m a mom, I’m a teacher, I’m a wife, I’m a daughter, I’m all these things ... and I needed it done right then, in my head.”

Diane’s father was in a nursing home also, and he was very ill.

But Diane’s testing came back negative. She underwent a lumpectomy, and was set up for radiation.

Meanwhile, Dee had a lumpectomy on Aug. 12, and was unable to lift anything over five pounds for four to six weeks.

“I wasn’t completely healed and then she’s having her surgery,” Dee said. “I just remember watching her at the funeral. I didn’t even know how she was doing it because I knew how she felt, and there she was, hugging all those people with stitches.”

“What was nice though, is that we were doing it together,” Dee said.

Then, they had time to heal.

And they were set up with an oncologist and radiologist.

“We did get to laugh about things,” Dee said. “Because we didn’t know things were going to happen.”

Such as the six tattoos Dee had imprinted on her body, a forever reminder of where the radiologist would line up the machine for radiation.

“The people who work in these jobs are amazing and kind,” Diane said. “It’s very scary, but they make it so calming and so accommodating and so comfortable.”

The women continued to work during their radiation, but stressed that this is not the best decision for everyone.

“A lot of times it’s better to work just to keep your mind off it,” Diane said. “I would say to anyone who does go through it, when you feel like you need a break, take a break. Don’t do it just because they said you should be able to. You can get very worn down and exhausted. It’s OK to say, ‘I’m exhausted.’ Because it got really rough at the end.”

The first 21 radiation sessions were full body and four sessions concentrated in on the affected area.

“We don’t want to scare anybody. You’ll make it through,” Diane said. “We did it.”

The ladies would teach during the day, go to radiation, go home and “crash,” wake up and do it again. The did this five days a week, for five weeks.

“All the doctors said, had it not been found on the mammogram, had it gone undetected, it would’ve become invasive,” Dee said.

The ladies continued to check in with their doctors, and will do so for the next three years.

“And when you’re done, as nice as all those people are, you don’t ever want to see them again,” Diane said. “But you have to keep going.”

William Q. "Bill" Trabert, 52, of Mercer, died unexpectedly Tuesday, July 7, 2020, in the emergency room of Butler Memorial Hospital. He was 52. Born Oct. 4, 1967, in Grove City, he was a son of William Bagnall and Shirley Trabert. Bill graduated from Grove City High School in 1985 and worke…