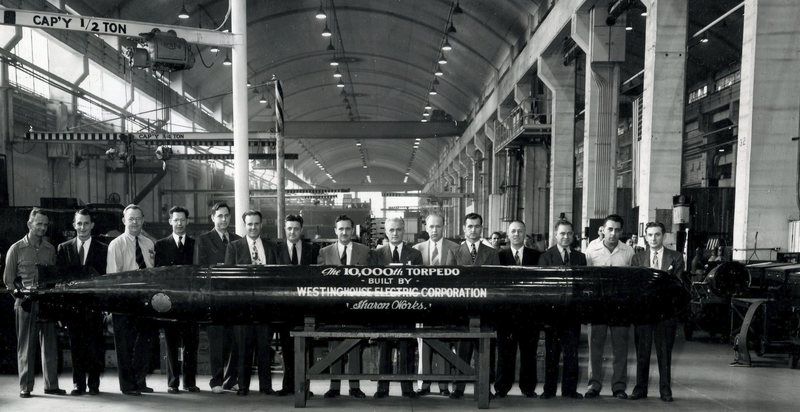 Officials gather at the Sharon Westinghouse Electric Corp. plant with the 10,000th Navy torpedo that was built there after the electrical transformer plant converted to wartime ordnance production during World War II. 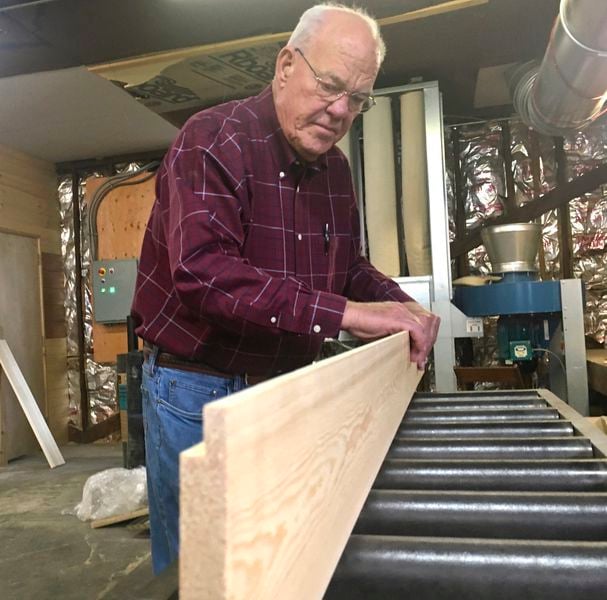 Jerry Calvert, co-owner of Calvert Lumber in Sharon, holds a piece of wooden baseboard that the Sharon company produced.. The business was started by Calvert’s grandfather, Joseph, and father, Jim, during World War II. The company built crates to hold Navy torpedoes produced by the former Westinghouse Electric plant in Sharon. 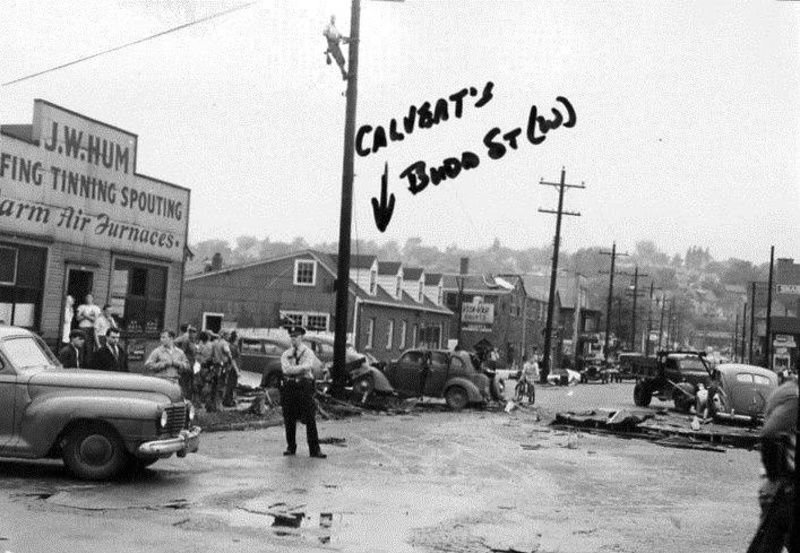 Calvert Lumber's original, year-old building on the south side of West Budd Street in Sharon is shown among the damage and chaos after the June 7, 1947, tornado. Sales from local reconstruction after the valley's other big tornado, in 1985, saved the company after five years of losses during the recession of the early 1980s. 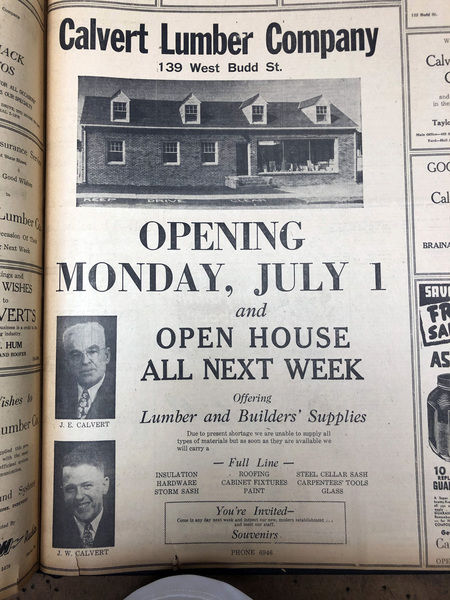 An ad for the grand opening of Calvert Lumber Co. in the June 29, 1946, edition of The Herald. After building thousands of crates for World War II torpedoes manufactured by the Sharon Westinghouse plant, the family took the leftover lumber after the war and transformed into a lumber yard and home-building company.

SHARON – Just like going to war, the government is desperately looking for businesses to step up and manufacture medical equipment needed in fighting COVID-19.

And there was the former Westinghouse Electric transformer plant in Sharon. The site now has multiple tenants and is being developed for a variety of businesses.

During the war, the Westinghouse plant gained recognition for producing electrically propelled Navy torpedoes. Tthe company tested them at Pymatuning Lake, and the remnants of a small one were discovered at Lake Julia at Buhl Park.

Then there was Calvert Lumber, a tiny business that got its start in providing to the war effort.

At the time Westinghouse’s sprawling Sharon plant shifted its production of electrical transformers to MK-18 torpedoes. In all, the plant produced more than 10,000 torpedoes.

The torpedoes were among the most technologically advanced weapons produced by Americans during the war. Yet, in order to transport the ordnance Westinghouse urgently needed simple wooden crates to ship the torpedoes.

“Westinghouse, the government and military really needed those crates,’’ said Jerry Calvert, co-owner of the family business, which continues to operate.

At the outset of the war Calvert’s father, Jim, and grandfather, Joseph, were carpenters working for Wishart Lumber Co. in Sharon on Silver Street.

Wishart had a contract with Westinghouse to build the torpedo boxes, Calvert said.

“Westinghouse asked Wishart to produce more, but they couldn’t,’’ he added. “At that point my grandfather went to Westinghouse managers and asked if they would give him the contract if he could promise them to produce what was needed.’’

The deal was made with a handshake.

“That’s the way they did business back then,’’ Calvert said.

While constructing a single crate requires elementary carpentry skills, producing the thousands Westinghouse needed required heavy-duty equipment that the family didn’t have. To buy these, resources his grandfather secured a $50,000 bank loan – a princely sum at the time.

The father-and-son team housed their business at the former Goldberg Scrap Yard along West Budd Street in Sharon, where it still resides.

Westinghouse had made the decision to retool for the war, something American companies were given a strong motivation to do.

On June 25, 1943, Congress passed the War Labor Disputes, also known as the Smith-Connally Act, which allowed the president to take over plants needed for the war effort. The law also gave the government that power if a company ceased production because of a labor dispute.

Using the powers of that law hasn’t been talked about much in the current pandemic. But on Friday President Trump employed the Defense Production Act.

Created in 1950 during the Korean War, the law gives the president the power to direct the production and distribution of materials that have been declared essential to national defense. It gives the government first dibs to buy items from companies and ship them where needed.

Trump invoked this law requiring General Motors to produce more ventilators urgently needed by hospitals. A statement by the White House on Friday said the order was levied on GM to stop the delaying negotiations any further.

Laws weren’t needed to get Westinghouse producing equipment and parts for World War II, said Sam Messina, who worked at Westinghouse and later at other operations that settled in the plant.

“Westinghouse went after the contract to make torpedoes,’’ Messina said. “And they also made transformers for the Navy.’’

Less well known, he said, is the company produced parts for the top secret Manhattan Project – the effort to build the atomic bomb.

“They made cylinders for the atomic bomb,’’ Messina said. “Westinghouse played a big part in World War II.’’

After World War II the Calvert’s had a hefty supply of lumber left over ,and so the family created Calvert Lumber, which became a lumber yard and home builder.

Calvert’s still operates a mill shop in back of its retail store that can produce custom specialty wooden items such as stairs and decorative wood trim moldings.

Several of Jim’s children were involved with the business that in addition to Jerry included Bill, Sharon, Linda and Debbie. Jerry’s son, Steve, is the fourth generation to oversee the company.

There were hard times for the business. Before Shenango Dam was completed in 1965, the lumber company survived several severe floods from the overflowing Shenango River.

“In those days, there was no insurance available for natural disasters,’’ Calvert said. “And there was no help from the government like there is today.’’

And then the business faced a local economic war. Area manufacturers began closing their doors in the early 1980s, resulting in thousands losing their job.

“Business had come to a complete halt and we had five straight years of loses,’’ Calvert said. “We couldn’t have survived another year.’’

Even under those dire days the company didn’t lay off any employees, he said proudly.

A small turn in the local economy plus a devastating tornado on May 31, 1985, resulted in a big demand for lumber products and saved the company.

“We’ve been able to weather past storms in the market,’’ Calvert said. “We want to serve that niche for people wanting high-quality building materials and our specialty products. And who knows – maybe we can make something to help the war on the virus.’’