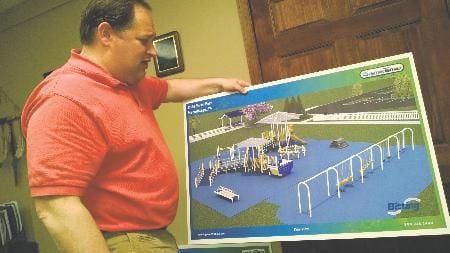 Shane Nugent and the proposed playground at Buhl Park 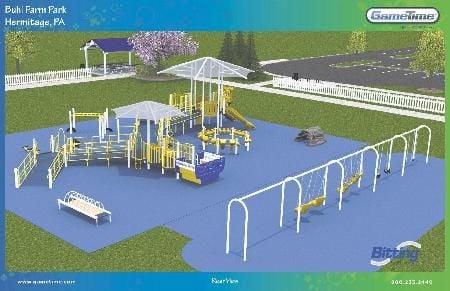 Shane Nugent and the proposed playground at Buhl Park

HERMITAGE – With the 100th anniversary of Buhl Farm park in Hermitage under way, Shane Nugent would like to be able to install this year the playground he and other Sharon Rotary Club members have been working on for four years.

Although they might not be able to complete the fundraising this year, park officials are pressing forward with city approvals, which are good for five years, so they can be ready when the money is there.

Hermitage Planning Commission recently recommended approval of a land development plan, and city commissioners will have their say later in the month.

Nugent, chairman of Rotary's playground committee, said the club has raised $135,000 and spent $93,000 to buy the play equipment. The apparatus was bought for about half the expected cost due to state and federal grants that equipment maker GameTime was able to get for the project, he said.

However, much more money needs to be raised – or in-kind services committed – to cover excavation and grading, the 7,500-square-foot, rubberized play surface, sidewalks, storm drains, engineering and other expenses.

The brainchild of Rotarian Jen Ristvey, who saw one in Cranberry Township, Butler County, the playground would be all-inclusive, meaning children of differing levels of ability would be able to use it, Nugent said. The ramps will be wide enough to accommodate two wheelchairs side by side, and there will be swings in which wheelchairs can be rolled on and secured.

Other features will include a drum circle, slides, climbing bars and a crow's nest with kaleidoscope and telescope.

Playgrounds are designed to help children develop physical skills such as strength, motor control and dexterity, and disabled children are due the same opportunities, Nugent said.

The playground also would bring special needs and nonspecial needs children together in a common pursuit, he said.

"I think it's a good project; something the community could definitely benefit from," Nugent said. "We're trying to go as first class as we can. It might be a draw for some people into this area."

Park Director of Operations Tom Roskos has talked about creating specific programs for the playground, an idea Nugent endorsed.

Eventually, organizers want to build a parking lot for the playground. The area for the lot will be graded at the time the playground is installed, but paving likely will not occur then, Carly said.

The playground would be built south of the performing arts center and southeast of shelter one.

Variably cloudy with snow showers. Low around 30F. Winds SSW at 5 to 10 mph. Chance of snow 70%. About one inch of snow expected.

Mainly cloudy with a mixture of rain and snow showers developing late. Low 34F. Winds W at 5 to 10 mph. Chance of precip 30%.