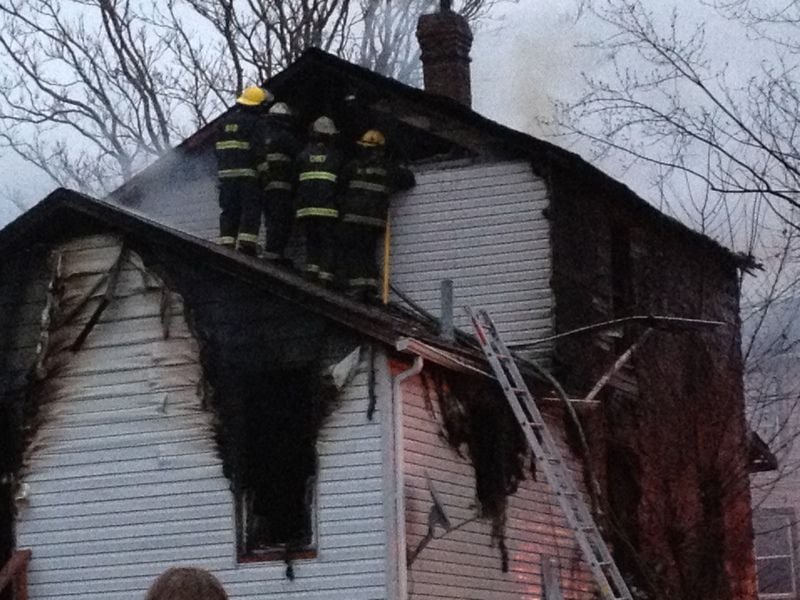 MELISSA KLARIC | HeraldA quartet of firefighters check for hot spots and any other signs of fire in the attic of this house at 161 Fifth Ave. in Sharon. The house went up in flames on Christmas Day, displacing the family that includes mother and two teenagers. 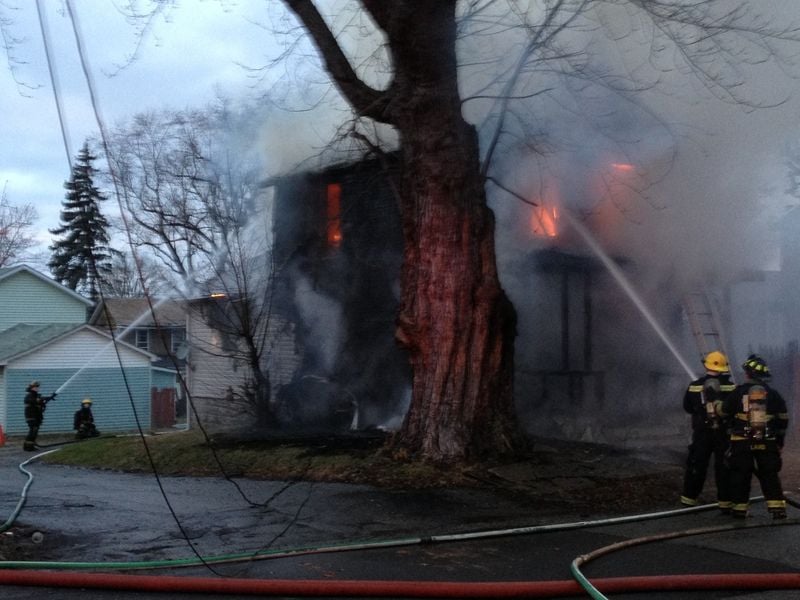 MELISSA KLARIC | HeraldFirefighters attempt to extinguish flames roaring through the second floor of this frame house on Fifth Avenue in Sharon.

MELISSA KLARIC | HeraldA quartet of firefighters check for hot spots and any other signs of fire in the attic of this house at 161 Fifth Ave. in Sharon. The house went up in flames on Christmas Day, displacing the family that includes mother and two teenagers.

MELISSA KLARIC | HeraldFirefighters attempt to extinguish flames roaring through the second floor of this frame house on Fifth Avenue in Sharon.

SHARON – Two teenagers, two pit bulls and two cats made it out of a house that was engulfed in roaring flames when firefighters arrived late Thursday afternoon.

"These kids probably lost all their Christmas presents," Sharon police Chief Gerald Smith said. "Nobody wants to see tragedy like this, especially on Christmas."

Pamela Rueberger went to the store to pick up some groceries for Christmas dinner and returned to see her home at 161 Fifth Ave. in flames and her daughters, ages 14 and 12, outside watching.

"We lost six cats, some of them were babies," Rueberger said. "We have to try and get into the garage and get her rabbit."

Smith said everyone made it out of the house OK, including Rueberger's boyfriend who was there when the fire broke out.

"The fire started in bed, but the boyfriend's denying he was smoking in bed," Smith said.

Smith did not have the boyfriend's name but said the man had dragged the mattress onto the front porch.

The fire started at 4:28 p.m. and firefighters battled the flames in the cold, while the wind whipped around thick smoke that at times entirely blocked the view of the small white house.

"The fire was so bad the street department came out and blocked off the road (Robinson Place) at North Oakland and Fourth," Smith said.

By the time the fire was extinguished at about 6 p.m., the house was black and completed gutted.

The Red Cross was called as the family packed up some clothes people took them as word of the fire spread on social media. Rueberger said they will be staying with relatives for now.

There will be no official ruling on the cause until a state police fire marshal investigates.