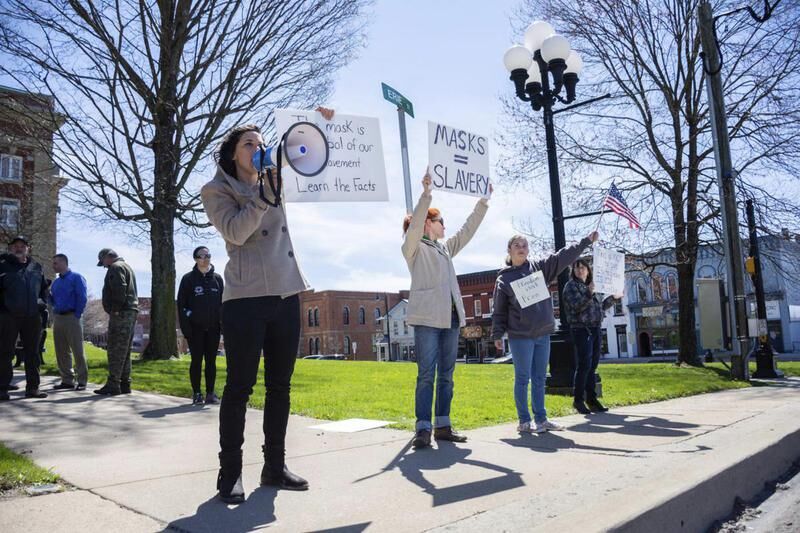 TANNER MONDOK | Herald fileDemonstrators gathered outside the Mercer County Courthouse in Mercer in April to protest Pennsylvania Gov. Tom Wolf’s stay-at-home order and his shutdown of non-essential businesses to stem the spread of the coronavirus. 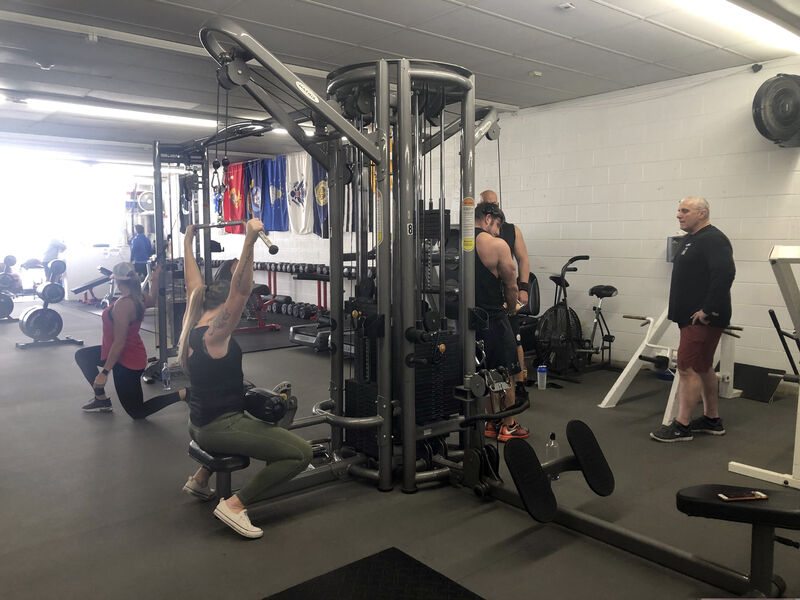 MELISSA KLARIC | Herald fileMembers train in P.R.E.P. Training and Fitness Systems in Hermitage, shortly after the gym reopened May 1. The city cited the business for each day it violated the state mandate against reopening. The Mercer County district attorney declined to prosecute the case.

HARRISBURG — A federal judge has ruled that the state’s limits on crowd sizes and business closing orders put in place by the Wolf Administration to slow the spread of coronavirus are unconstitutional.

The Wolf Administration plans to appeal and will seek a stay to keep the order in place pending that appeal, said Lyndsay Kensinger, a spokeswoman for Gov. Tom Wolf.

Stickman, who was appointed by President Donald Trump last year, noted that the order limiting crowd sizes makes no exception to allow protests to exceed the crowd size limits but “the record unequivocally shows that the defendants have permitted protests and that the Governor participated in a protest which exceeded the limitation set forth in his order.”

“The judge threw out the congregate rules as unconstitutional for all gatherings,” he said.

The crowd-size limits have remained among the most controversial mitigation efforts still in place. Legislation that has passed both chambers of the General Assembly would allow school districts to ignore the crowd-size limits for scholastic sports. Wolf has said he will veto that legislation.

“The actions taken by the administration were mirrored by governors across the country and saved and continue to save lives in the absence of federal action,” Kensinger said. “This decision is especially worrying as Pennsylvania and the rest of the country are likely to face a challenging time with the possible reemergence of COVID-19 and the flu in the fall and winter,” she said.

Health Secretary Dr. Rachel Levine said that she couldn’t comment on what legal strategy the administration will take in response to the decision.

She added however, that administration officials still believe it’s important people avoid large gatherings in order to slow the spread of coronavirus.

Legislative leaders in both chambers of the General Assembly said the decision validates their efforts to pushback against the governor’s emergency orders.

“While we work to protect lives, we cannot disregard the civil liberties of Pennsylvanians,” Senate Majority Leader Jake Corman, R-Centre County said. “We hope that this ruling will signal to the Governor that he must no longer spurn attempts by the General Assembly to provide input through legislation.”

The court also examined the Wolf Administration’s handling move to shut down businesses and order residents to shelter at home, as well as the process the administration used to determine which businesses could remain open during the shutdown.

Stickman found that the move to close businesses violated the 14th Amendment’s protection against unlawful restriction of a person’s life, liberty or property without due process.

The judge said that the type of statewide lockdowns put in place in the spring “are unprecedented in American law,” though he also added that in 1918, Pennsylvania Health Commissioner B. Franklin Royer issued an order closing “all public places of entertainment, including theaters, moving picture establishments, saloons and dance halls and prohibit(ed) all meetings of every description.”

That order was lifted a month later, the judge wrote.

“Broad population-wide lockdowns are such a dramatic inversion of the concept of liberty in a free society as to be nearly presumptively unconstitutional unless the government can truly demonstrate that they burden no liberty than is reasonably necessary,” Stickman wrote in his 66-page opinion.

“It’s a strong rejection of the governor’s position that he has the authority to rule by edict,” said state Rep. Tim Bonner, R-8, Grove City, one of the plaintiffs in the case.

On the crowd-limit issue, Stickman noted that while Wolf and other state officials made public comments indicating that the order wasn’t intended to bar protests or rallies but added that the administration hadn’t spelled out how it was making those exceptions to protect free speech in its order.

“Defendants cannot govern by comment,” he wrote. “Rather they are bound by the language of their orders. Those orders make no allowance for protests.”

Stickman also found that the administration’s crowd size limits are also illegal because they don’t take into consideration the size of the venue the crowd is gathering in, especially in light of the state’s move to allow some commercial events to take place despite the crowd-size order.

“The cap on the number of people that may gather for political, social, cultural, education and expressive gatherings while permitting a larger number for commercial gatherings limited only by a percentage of the occupancy capacity of the facility is not narrowly tailored and doesn’t pass constitutional muster,” Stickman wrote.

The federal court judge’s decision gives Republicans who have repeatedly pushed back against Gov. Tom Wolf’s mitigation effort a victory that Wolf has repeatedly denied by veto pen and the state Supreme Court has denied in cases brought to them.

“There is no question that this country has faced, and will face, emergencies of every sort. But the solution to a national crisis can never be permitted to supersede the commitment to individual liberty that stands as the foundation of the American experiment,” Stickman wrote. “The Constitution sets certain lines that may not be crossed, even in an emergency. Actions taken by the defendants crossed those lines.”

The lawsuit was brought by four western Pennsylvania counties – Butler, Greene, Fayette and Washington, a group of Republican elected officials, and business owners, including the operators of drive-in theaters, hair salons, and an appliance store.

Stickman noted that the statewide business shutdown and the stay-at-home order are no longer in place, but added that administration officials maintained that they felt like they could reinstate those measures if needed.

“What was initially billed as a temporary measure to ‘flatten the curve’ and protect hospital capacity have become open-ended and ongoing restrictions aimed at a very different end – stopping the spread of an infectious disease and preventing new cases from arising,” Stickman wrote. “After six months, there is no plan to return to a situation where there are no restrictions imposed upon the people of the Commonwealth,” he wrote.