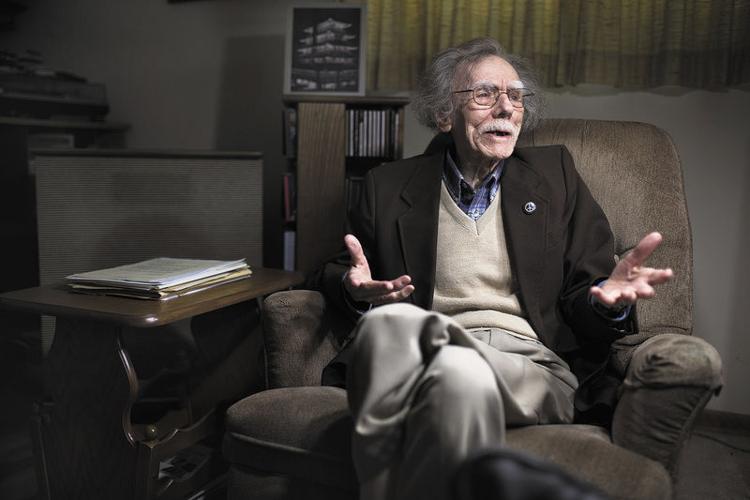 AP fileLarry Gara speaks to a reporter during an interview at his home in Wilmington, Ohio in October 2015. Gara, 94, was fired from Grove City College in 1962 for his pacifist views. Last year the college gave him a formal apology. 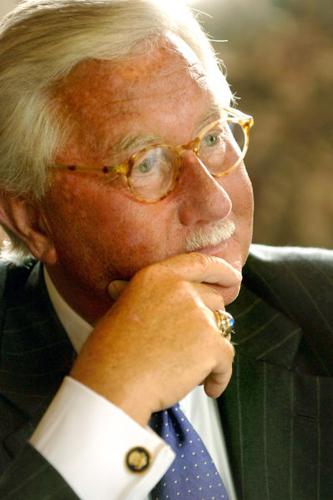 AP fileLarry Gara speaks to a reporter during an interview at his home in Wilmington, Ohio in October 2015. Gara, 94, was fired from Grove City College in 1962 for his pacifist views. Last year the college gave him a formal apology.

GROVE CITY – After a more than a half-century, Grove City College was taken off the top of the American Association of University Professors’ censure list at its 102nd Annual Meeting on Saturday.

“There was great celebration at the annual meeting, great rejoicing, that Grove City had been removed,” said Gregory F. Scholtz, director of the AAUP’s Program in Academic Freedom and Tenure on Monday.

Scholtz “immediately” emailed Dr. Robert Graham, provost of GCC, and Dr. Paul McNulty, president, after the AAUP members voted in favor of having the censure removed, he said.

GCC had the longest-standing censure of 53 years by the century-old organization that seeks to promote professional freedom, shared governance and economic security for professors.

“They both emailed back immediately,” Scholtz said of Graham and McNulty, adding they were also very excited about the AAUP’s decision.

Graham was the first provost to respond to one of the AAUP’s annual letters in 2013 to bring resolution to the censure, with McNulty encouraging dialogue in 2014, involving the firing of former history and political science professor Dr. Larry Gara in 1962, he said. Both heads of the school were just starting their careers at GCC.

“Grove City College is pleased with AAUP’s membership vote, and we especially appreciate the association’s assistance in achieving a complete resolution of this issue,” McNulty said in a press release.

“Resolution of this matter is a recognition that Grove City College values and respects academic freedom and due process,” Graham added. “(GCC) is built on an uncompromising foundation of principled leadership, ethical standards, and personal integrity – characteristics that our faculty and administration aspire to every day.”

Voting to censure/lift censures and censure investigations are done by AAUP members, not staff. Gara’s case had three investigators, including Ralph S. Brown Jr., a famous law professor from Yale University. “We named an award after him for continued shared governance,” Scholtz said.

To have the censure removed is a three-step process, he added. “There has to have some type of redress with the faculty member, work on policies and a representative of AAUP visits campus,” Scholtz said. “That isn’t done by staff but a member.”

Last August, Richard “Dick” Jewell, GCC president emeritus and McNulty’s predecessor, drove to Wilmington, Ohio, to talk to Gara and his wife, Lenna Mae – who are in their 90s – to express the college’s regret over the matter.

“We are pleased the faculty and administration felt the censure mattered enough to have it removed. We’re immensely pleased that they took steps to apologize. No institution has ever done that before,” Scholtz said.

“It was above and beyond the call of duty. For redress, we thought in lines of having Gara to come and have a talk or something. He’s an expert on the Underground Railroad.”

In March, GCC made changes in policy based on AAUP standards, which says suspension or termination of a professor must be preceded by a written cause and opportunity for defense at a hearing before faculty representatives, according to a June 3 letter by by the AAUP’s Committee A on Academic Freedom and Tenure.

The committee recommend the censure be removed after a lengthy report was submitted by AAUP member Tim Blessing, president of Pennsylvania’s AAUP division, who visited the campus in April to assess the school.

Gara’s story was re-ignited last October after Jewell’s visit, which resulted in a story by the Associated Press about Gara’s firing in 1962 – which was reprinted in about 90 media outlets worldwide.

It stated that his activism, which caused Gara to serve jail time in his younger days, and pacifist views amid the Cold War era – not to mention then-oddities such as being a vegetarian – made him unpopular with higher ups and some faculty at GCC.

The public relations office at Wilmington (Ohio) College – where Gara was able to find employment after the GCC scandal, retired and sometimes speaks – contacted the AP after Gara received a letter of regret from Jewell, who shared it with the office.

Taaffe also spoke to Jewell and Anderson while he was in town visiting in 2011, and Jewell submitted a statement for his article that October. The article was finally published with others in “Shaping the American Faculty,” by Transaction Publishers, last summer. Jewell’s receipt of the final copy prompted the visit to the Garas that August.

Last year, McNulty said publicly that Gara’s situation would have been handled quite differently by procedures used by GCC today.

Gara told Allied News last year that six faculty left GCC in protest of his firing – which he did not instigate – and he went to the AAUP to receive a “neutral evaluation” of his teaching, not to harm the college. He was labeled incompetent by administrators – and backlash to the witch hunt “nearly ended my teaching career,” he added.

Taaffe’s article “filled in many blanks,” Gara had said.

The AAUP censure was the result of Gara not receiving due process before GCC decided not to renew his contract, Scholtz said. It also believed he should have received tenure because he was five years at GCC and five years somewhere else, he added.

He noted that tenure “doesn’t have to be all at one institution” under AAUP standards. The AAUP was the first to formalize the practice of tenure, due process and governance in higher education, Schultz said.

GCC doesn’t give tenure for employees and doesn’t have to renew a professor’s contract by law. However, “We aren’t concerned about law but sound academic standards. Most reputable institutions operate on our standards,” Scholtz noted.

On Monday, both Gara and Taaffe hadn’t heard of the censure being lifted. In emailed statements, Gara said, “I was pleased since my only reason to call in the AAUP was to save my teaching career and their report did that,” he said. “I wish to express my thanks.”

He also expressed appreciation to Jewell for his heartfelt regrets when visiting last year, and felt GCC has come a long way in changing its policies – and “extreme” stance of him as a professor – that made it subject to censure, he said.

“I am now 94. Both of us are in pretty good shape but slowing down. The reason we are in such shape is vegetarianism, no smoking or alcohol, and a loving family life,” Gara noted.

“What the college did to Larry Gara in 1962 was wrong and was a longstanding black mark against the institution,” Taaffe wrote. “The college administration’s willingness to acknowledge this and make sure it doesn’t happen again is laudatory.

“And President Jewell’s willingness to drive to Wilmington to say so personally to Dr. Gara was certainly a class act.”

He felt that being censured for so long by the AAUP may have made people reluctant to work or have their kids attend GCC, “although some folks (may have) saw it as a badge of honor,” he added.

“It looks like once they starting talking, the differences were not as great as they initially appeared. It’s just as important for institutions to acknowledge wrongdoing. I’m pleased that the college expressed its regret about the way it treated Dr. Gara.”

“Being on the censure list for 53 years was not representative of what we are as a faith-based institution and doesn’t reflect our long-standing commitment to fairness and respect for our employees,” McNulty said. “The college is a wonderful environment for scholars to thrive professionally.”

Now Frank Phillips College in Texas is in the No. 1 spot at 47 years of public disapproval by the AAUP, according to its website at www.aaup.org.

The GCC case generated “thousands of pages” of information in 50 years, which often involved the work of Jordan Kurland. It was the first censure he gave as a member of the AAUP, before becoming associate general secretary of the AAUP in 1965, Scholtz said.

After years of being silent, Kurland was excited to see the administration at GCC take steps to have the censure removed before his death in January, he added. “His life was the AAUP. … We all sort of felt that we owed it to his legacy to push this through.”

At his memorial service, Kurland’s youngest son told Scholtz that one of the last things his father spoke of before he died was GCC’s censure being lifted, he said. “It was certainly a subject very close to his heart. … The lifting of the censure was, in many ways, seen as a tribute to the memory of Jordan Kurland.”