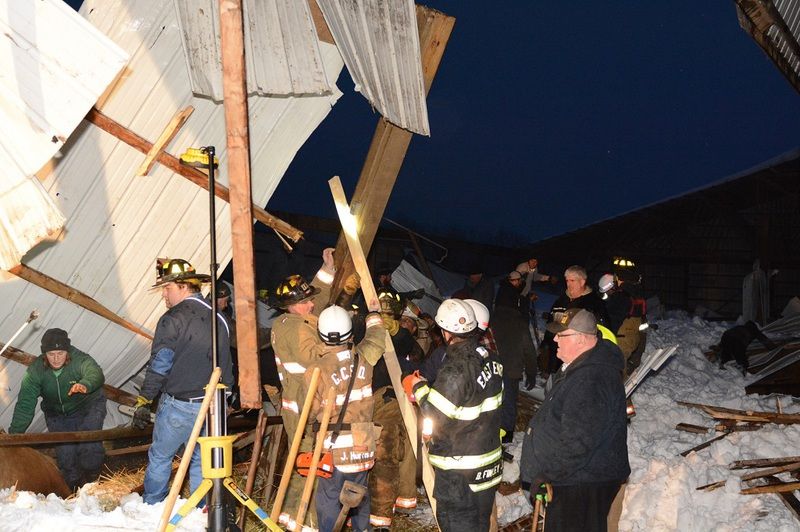 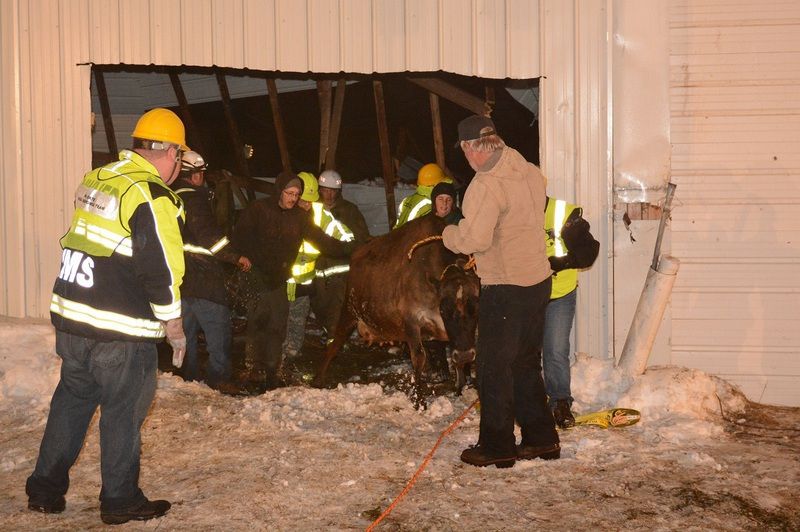 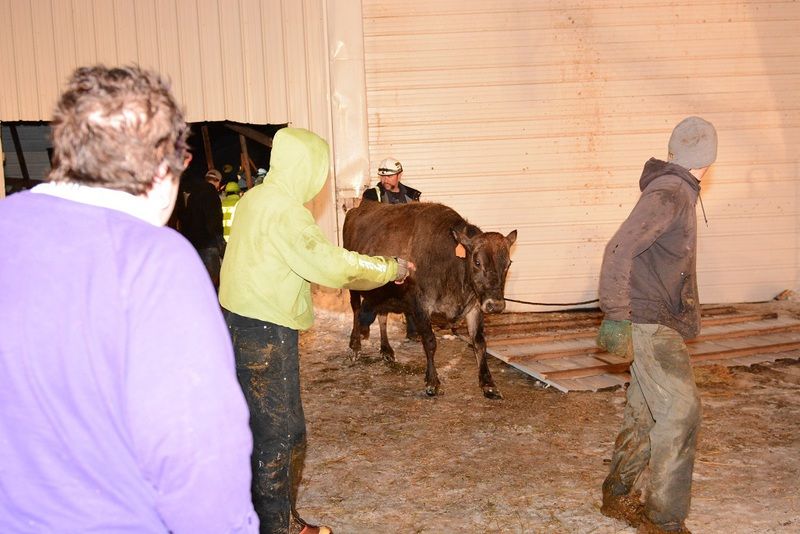 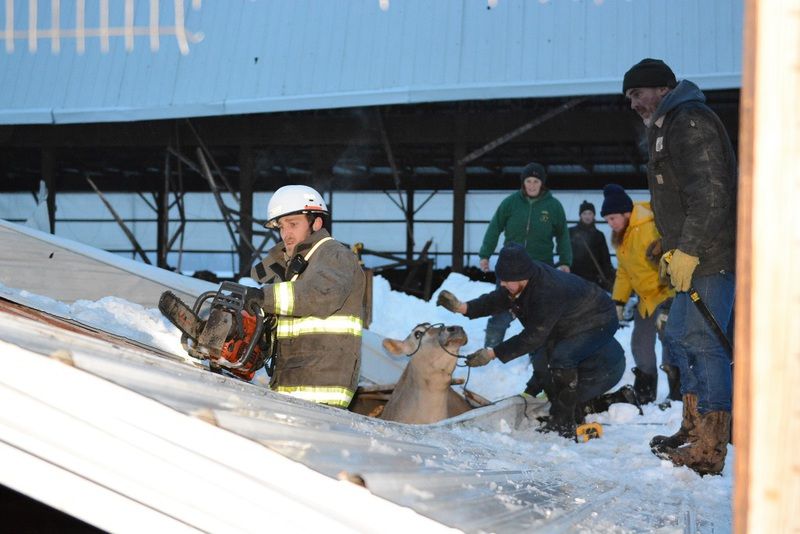 PERRY TOWNSHIP – Heavy snow collapsed a Perry Township dairy barn Tuesday, triggering a rescue effort to save the cows inside. The caller to 911 at about 5:25 p.m. reported that a person may have been trapped but anyone inside was out safely when Sheakleyville Volunteer Fire Department arrived at Colpetzer Xanadu Jersey Farm, 195 Laver Road, Chief Tim Buck said.

No people were hurt, he added.

Buck estimated that as many as 200 dairy cows owned by Tom and Amy Colpetzer were inside the 200-by-150-foot barn when most of it fell down because of a heavy snow load on the roof.

Dispatchers called out a technical rescue team of firefighters from several departments who are trained to evaluate collapsed buildings for safety. An animal response team trained to work with the rescue of large animals was also called to the scene.

“We had quite a bit of help from the community,” Buck said Wednesday afternoon. “There were a lot of Amish farmers and other farmers from the area who came down and helped shovel snow off the roof. I would say there were close to 75 people there helping to get the animals out.”

An unknown number of others was still buried under debris when the search had to be called off because rising wind posed the danger of a further collapse that could have endangered emergency responders. An estimated 150 rescued cattle were trucked to Mercer Livestock Auction, Coolspring Township, for safekeeping in its animal pens and several injured animals were taken to neighboring farms.

“They were going to have to get a track hoe or some kind of machine to lift up the roof structure to see what was under it,” Buck said. He didn’t know if the Colpetzers had insurance and a phone message seeking information from them was not returned.

Rescuers cleared the scene at about 11:30 p.m. Tuesday.

LOS ANGELES — Louie Anderson, whose four-decade career as a comedian and actor included his unlikely, Emmy-winning performance as mom to twin adult sons in the TV series “Baskets,” died Friday. He was 68.

Meat Loaf, 'Bat Out of Hell' rock superstar, dies at 74

NEW YORK — Meat Loaf, the heavyweight rock superstar loved by millions for his “Bat Out of Hell” album and for such theatrical, dark-hearted anthems as “Paradise By the Dashboard Light,” “Two Out of Three Ain’t Bad,” and “I’d Do Anything for Love (But I Won’t Do That),” has died. He was 74.

WASHINGTON — Voting legislation that Democrats and civil rights leaders say is vital to protecting democracy collapsed Wednesday when two senators refused to join their own party in changing Senate rules to overcome a Republican filibuster after a raw, emotional debate.

WASHINGTON — President Joe Biden acknowledged Wednesday that the pandemic has left Americans exhausted and demoralized but insisted at a news conference marking his first year in office that he has “outperformed” expectations in dealing with it.

Partly cloudy skies during the evening will give way to cloudy skies overnight. Low 6F. Winds light and variable.