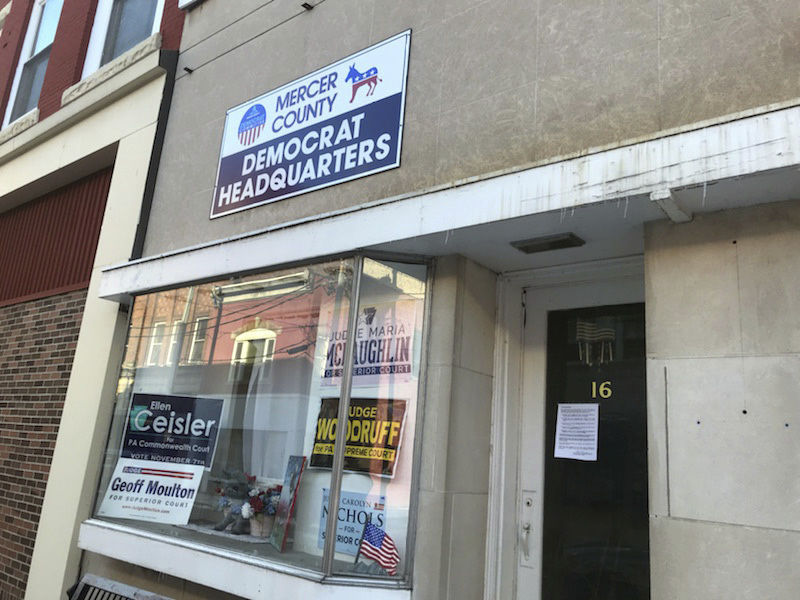 The landlord posted an eviction notice on the door of the office at 16 Vine Ave. in Sharon that he rents to the Mercer County Democrat Committee. 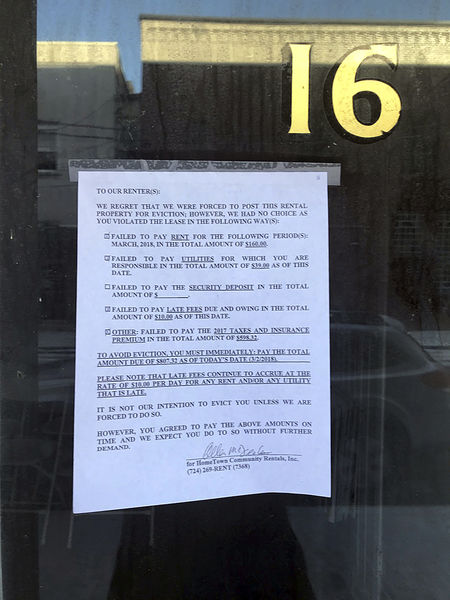 An eviction notice posted on the door at 16 Vine Ave. in Sharon says the tenant, the Mercer County Democrat committee, is behind on rent, utilities, late fees, taxes and insurance.

The landlord posted an eviction notice on the door of the office at 16 Vine Ave. in Sharon that he rents to the Mercer County Democrat Committee.

An eviction notice posted on the door at 16 Vine Ave. in Sharon says the tenant, the Mercer County Democrat committee, is behind on rent, utilities, late fees, taxes and insurance.

SHARON – Leadership on the Mercer County Democrat Committee is split over whether the party has been locked out of its headquarters on Vine Avenue, even though the property’s owner has posted an eviction notice on the door of the building.

Diane Syphrit and Mercer County Commissioner Tim McGonigle, who won seats on the state Democratic Committee according to unofficial results from Tuesday’s election, said that the headquarters’ locks at 16 Vine Ave. in downtown Sharon had been changed, a contention that county Democrat chairman Ryan Mergl disputes.

“No, the locks were not changed,” Mergl said. “Tim is full of misinformation because he never comes around, by the way.”

The small office space on Vine Avenue, across from Mergl’s law practice, is in a building owned by HomeTown Community Rentals.

“Rent is paid through the organizational meeting, and the new regime can decide if they want the headquarters or not,” Mergl said. “I personally donated money to keep headquarters open. I am the first chairman in Mercer County to have a continuously opened headquarters.”

J. Jarrett K. Whalen, president of HomeTown Community Rentals, said he was forced to change the locks on the headquarters.

Whalen said he offered to donate the space to the party, but that would have amounted to a political contribution, so the two sides set rent at $160 per month.

“Ryan (Mergl) and I talked about him considering paying the delinquency for the rent so they wouldn’t lose the building on his watch,” Whalen said. “He never paid it. He never got back to us. So after about 45 days, we changed the locks.”

Whalen also said that other local Democratic party members told him they were not going to pay the bill and asked him to lock them out.

Whalen said that the party began renting the space in March 2016. In that time, HomeTown forgave $1,600 in back rent.

“They were supposed to pay part of the taxes and insurance for the building, and they never paid it,” Whalen said. “We really tried. We said every month they paid the rent on time, we’ll make a donation back to the Democrats, but it was never on time.”

McGonigle said that HomeTown was very generous with the Democrats.

“We really wanted them to have their own headquarters,” Whalen said. “We’re not taking their stuff or anything like that. I’m hoping we can do something with them in the future.”

Charlotte Rodgers, 69, of Greenville passed away unexpectedly on Friday, June 5, 2020 at her residence. Arrangements are incomplete and under the direction of: OSBORNE-WILLIAMS FUNERAL HOME AND CREMATION SERVICES, INC., 73-75 Columbia Ave. Greenville, PA 16125.