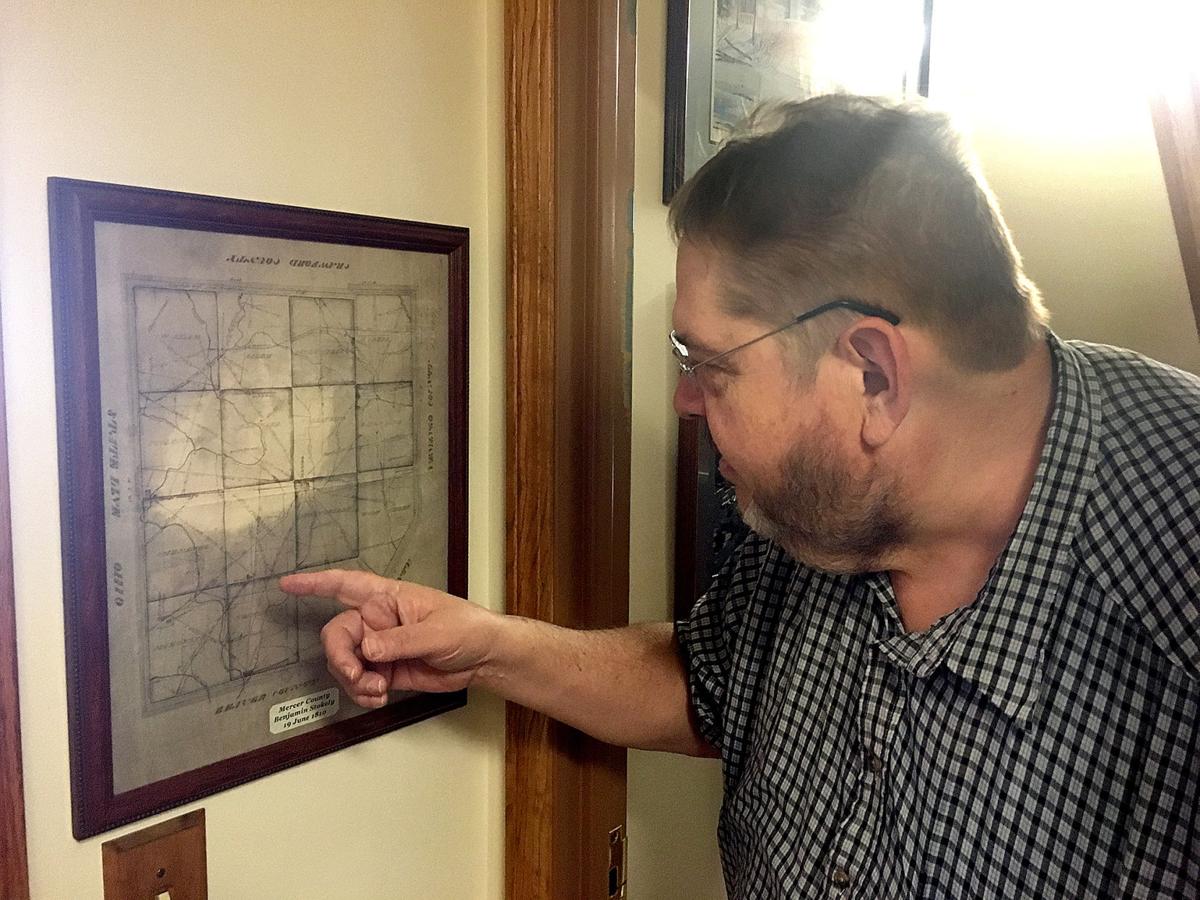 Bill Philson, executive director with the Mercer County Historical Society, looks at a map of Mercer County, circa 1800. 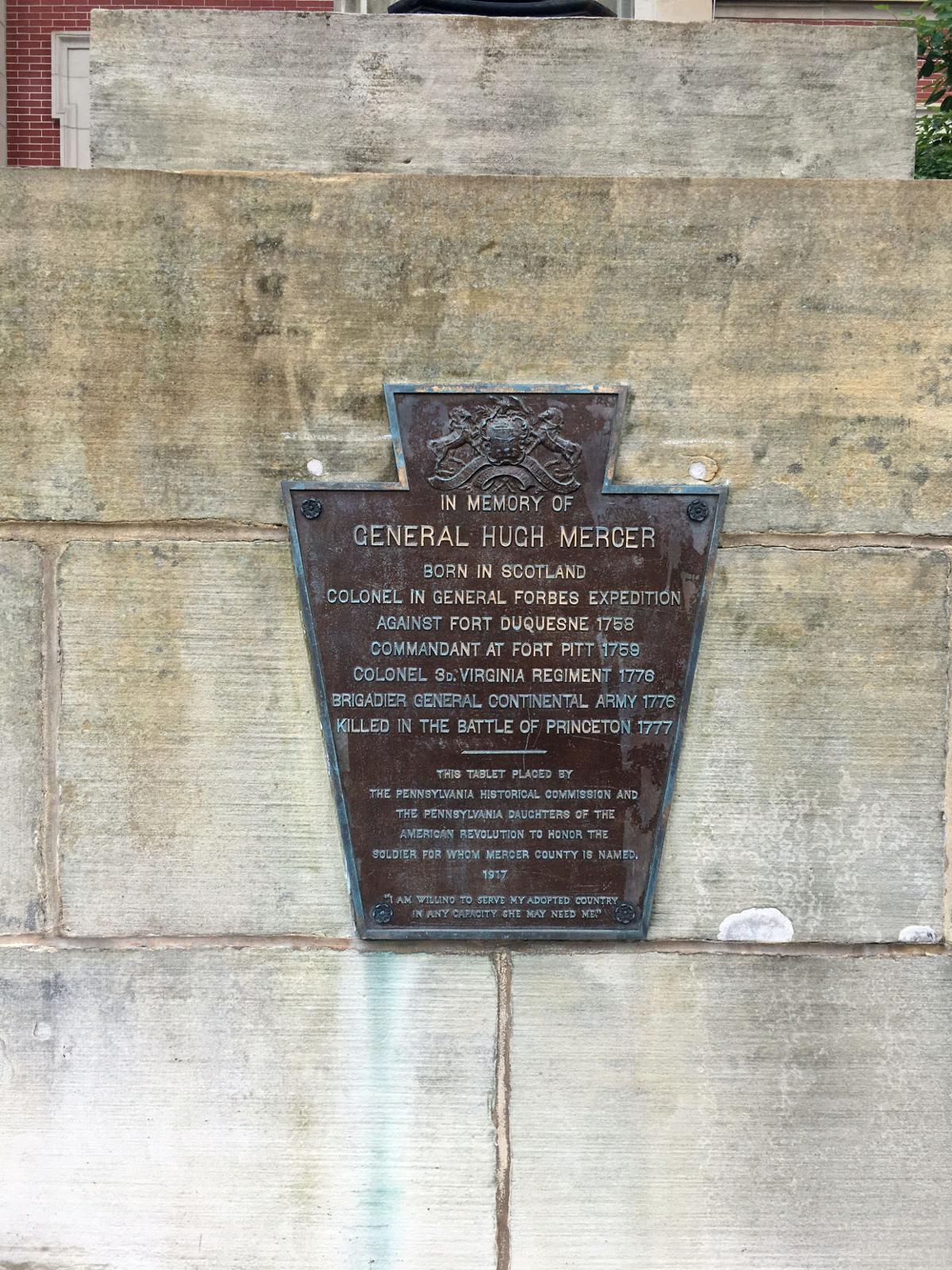 A memorial to Gen. Hugh Mercer, who served in the Continental Army during the Revolutionary War, can be found next to the steps on the north side of the Mercer County Courthouse.

MERCER — On this day more than 200 years ago, the Revolutionary War was in full swing — soldiers in opposing reds and blues marched across fields under cannon fire, while figures such as George Washington tried to establish what would become the United States of America.

And though some places became known for the battles that occurred there, such as Bunker Hill, Lexington, Concord and Yorktown, things were relatively quiet in Mercer County — largely because Mercer County didn’t exist yet, nor were any settlers living there, said Bill Philson, Mercer County Historical Society executive director.

“We became Mercer County in March of 1800, but prior to that, we were under the control of Westmoreland and Crawford County,” Philson said.

Aside from a lack of any battles or skirmishes, there are a few rumors that Washington might have visited or stayed overnight in what would become Mercer County. Philson calls such stories “highly speculative” and said Washington’s own records don’t provide any evidence to support the rumors.

“I personally don’t believe it, because Washington had a very complete diary, and it doesn’t even mention him coming to this area,” Philson said.

Even if Washington himself never appeared in the county, there was another officer fighting with the American Continental Army whose name should sound familiar to local residents — Hugh Mercer.

Originally from Scotland, Mercer came to the colonies and fought for the British in the French and Indian War, which led to him meeting and befriending another colonel at the time, George Washington. Although he became an apothecary in peacetime, the Revolutionary War saw Mercer return to service, this time on the Americans’ side, Philson said.

“Being a friend of Washington, (Mercer) found himself in the position of general,” he said.

The battles Mercer participated in included the Battle of Trenton, an American victory known for Washington’s forces crossing the Delaware River. However, it was Mercer’s final battle, the Battle of Princeton, that secured his place in both local and national history.

During the march to Princeton only two weeks after the Battle of Trenton, Mercer and the vanguard under his command encountered British troops. In the ensuing battle, British soldiers killed Mercer’s horse and surrounded the general, mistaking him for Washington.

“They told him, ‘Surrender, you damned rebel,’ to which Mercer allegedly replied, ‘I’m no damned rebel’ and drew his sword,” Philson said.

Even though Mercer attempted to fight the soldiers, he was stabbed seven times with bayonets before being left for dead. However, an American aide discovered Mercer was still alive and took him to a nearby farmhouse.

Even though Washington sent his best doctor to care for his friend, Mercer already seemed to know his fate, Philson said.

“The doctor said he’d make it, but Mercer said, ‘No, look under my arm — it’s the smallest wound, but the most fatal,’” Philson said. “Apparently he had a collapsed lung, and he died a few days later.”

However, when the Revolutionary War ended and the U.S. secured its independence from Great Britain, the American government found itself having to deal with a new problem — how to pay the many soldiers who had served in the Continental Army.

A common practice at the time was “donation land,” where instead of money the former soldiers were paid in land to settle. A regular soldier could be paid 200 acres, while an officer could be paid 500 acres, Philson said.

On top of helping to pay off the government’s debt, the concept of donation land also helped encourage former soldiers to settle areas and form militias in places where conflicts with American Indians could occur.

“If you get together a bunch of guys who just fought in a war, then they could very easily form a militia,” Philson said.

This led to settlers arriving in the area during the 1790s, with the newly created county christened after the late Hugh Mercer.

“A lot of the counties at the time were given Indian names or named after important people, so 23 years after his death, people were still talking about Mercer,” Philson said. “There’s six counties in the United States named after Hugh Mercer, so that raises the level of why he’s important a few degrees.”

By 1800, the population of Mercer County had grown to 3,000 people, according to records at the time.

Aside from settlers, the area’s American Indian population included some Delaware and some Shawnee, who were ruled by a Seneca overlord or half-chief. Due to populations moving west, the local Indian population became a mixed group known as “mingos,” Philson said.

“They were basically unaffiliated Indians who didn’t have a tribe anymore,” he said.

Although the increasing expansion of the American settlers led to conflicts with local Indians throughout U.S. history, Mercer County only had a little bit of violence between settlers and Indians, some by the settlers and others due to personal matters, Philson said.

One individual in particular from this time period was James Jeffers, a frontiersman who lived in the Mercer County area in the early 1800s. Aside from former soldiers, many of the original European or American inhabitants of this area were traders, gunsmiths and frontiersman who could live alongside the Indians — but Jeffers was not known for his co-existence with the locals, Philson said.

“He supposedly lost some of his family to Indians during the French and Indian War,” Philson said. “He was known as someone who, when he could, would make Indians dead.”

In one particular incident in the early 1800s that was recorded in the 1888 book “History of Mercer County,” an Indian named Harthegig — the son of the local Indian chief — entered the home of the Pew family, who was living in Mercer at the time, and threatened the Pew’s son, Samuel Pew, while under the influence of alcohol.

Jeffers was present for the incident, and allegedly threw Harthegig out of the home. The next day, Harthegig was seen running past the house, followed by a now-armed Jeffers, who asked for Harthegig’s direction and followed him into the forest.

A few hours later, Jeffers emerged from the forest with a “seemingly pleased expression on his countenance,” according to “History of Mercer County.”

It is unknown exactly when Jeffers left the Mercer County area, but he is believed to have left by the War of 1812, some years after the incident. However, it was during the 1810s that someone did find what is theorized to have been evidence of Jeffers’ actions, Philson said.

“Someone was chopping down a sycamore tree on their property and this big skeleton fell out,” he said.

When the War of 1812 broke out between the U.S. and Great Britain, Mercer County sent a “massive” number of soldiers to participate, although the exact numbers from that time period are difficult to determine, Philson said.

“We had gentlemen fighting on the boats with Admiral Perry in Lake Erie. We had men in the Battle of Timbers, the Battle of Detroit,” he said.

One Mercer County resident, John Junkin, served in the Continental Army when an outbreak of what is suspected to be “black rock fever” broke out in a barracks near Mercer. Junkin later died on April 27, 1814 — the last year of the war — at the age of 27, and is buried at Old Presbyterian Cemetery in Mercer, Philson said.

“There was a disease among the troops and (Junkin) was actually serving to try and help them get better, but he ended up catching it, too,” Philson said.

Even though the War of 1812 is sometimes called the “Second War of Independence,” it is often forgotten compared to other major conflicts such as the Revolution or the Civil War.

However, Philson said there are some reminders of Mercer County’s contributions to the formation of the U.S. They lie in the cemeteries here and there with grave markers from the time period to a plaque next to the north-side steps of the Mercer County Courthouse in memory of “General Hugh Mercer,” placed there by the Pennsylvania Historical Commission and the Pennsylvania Daughters of the American Revolution in 1917.

“The truth is, we’re a lot bigger area than people may believe when it comes to patriotism,” Philson said.