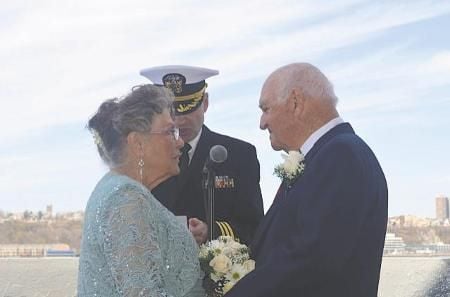 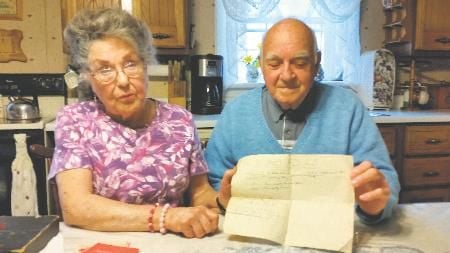 WEST SALEM TOWNSHIP – “There’s just something about the ship. You have a connection to it you never, ever forget,” said 88-year-old Navy seaman Don Bee, who celebrated his 70th wedding anniversary with his wife, Eloise, aboard the USS Intrepid in New York City.

The West Salem Township couple finish each other’s sentences and smile and laugh with the ease of people who have shared a lifetime of love. Bee, who is 90, can’t say enough good things about “Sis,” his 88-year-old wife of seven decades, with whom he had four children. He said he never dreamed he’d survive World War II, let alone return to his wartime home with his wife by his side.

The two had taken a trip last year to visit Bee’s wartime home, the aircraft carrier now parked in New York’s Hudson River. “We talked to the ship’s historian while we were there and told her we were about to celebrate our 70th wedding anniversary and she invited us to renew our vows aboard the ship,” Bee said. The couple, with a boatload of family and friends looking on, spent April 18, a glorious spring Saturday, promising to continue their wedding vows, committing first to God and second to each other and spreading that love legacy to their extended family.

Looking back on how they met and how World War II influenced their relationship from the start, Bee said struggling through the Depression and serving in the Navy during a conflict taught them both to appreciate what they have together and to focus on family.

Bee was born in Commodore, a tiny coal mining town in southwestern Pennsylvania, where he remembers selling fruit and vegetables with his grandmother who pulled a cart loaded with produce through town.

He was inspired when he was young, Bee said, by Butch Sebring, a neighbor who became a Navy pilot and “was somewhat of local hero.”

“So four of us went and signed up to take the tests. I wanted to be a Navy pilot and I passed everything but the eye test. My eyesight just wasn’t good enough. I felt pretty bad about that,” he said.

Bee said he became part of a 16-member crew aboard the USS Intrepid, a newly commissioned aircraft carrier stationed in San Francisco.

His job, he said, was to move planes from the hangar deck to an elevator mid-ship to take them below for storage. He is thankful, he said, to an older sailor who gave him lifesaving advice. “He told me when I hear the 20 mm guns going off, hit the deck flat on my belly and don’t argue about it. I passed that along to my crew and I can tell you that not one of us got killed,” Bee said.

Bee graduated from Greenville High School, he said, because his family moved there when he was a senior.

Eloise, two years younger, noticed him right away. “My friends and I looked up in the balcony where he was and I thought he was such a heartthrob and so handsome,” she said.

Bee admits he didn’t notice her at first, but when she turned out to be his blind date on a double date, he did a double-take. “I thought, 'Oh wow. She’s gorgeous,'" he said.

The couple wrote letters every single day when Bee was serving in the South Pacific. He said they devised a code so he could let her know where he was and if he was in danger.

“My letters were censored, so I didn’t give away the location. I put the stamp in a certain way to let her know. And if I was near China, I’d ask in the second paragraph ‘Is the Chinese Laundromat still on Main Street?’ and she would know.”

Bee said he didn’t expect to survive the war. Kamikaze pilots all too often crashed into the Intrepid, he said, trying to destroy planes and personnel. “Sometimes, they’d crash just feet from where I was standing. I saw so much tragedy. I thought there was no way I’d get out alive.”

Home for three days while the ship was being repaired after one such attack, he proposed to Eloise. “She grew up with nothing. Her father had died when she was young and her mother was trying to raise a large family. And she did a great job. But I was thinking that I had a $10,000 life insurance policy and if we were married and I was killed, that would give her something. A gift I wanted to give her. But, she was the one I wanted to spend the rest of my life with, so if I survived that would be wonderful,” he said.

“We put the wedding together in one day. On January 27, a Saturday, I got a dress and he got an engagement and wedding ring. We called a minister. And we went to Camp Reynolds for our blood work. Even though he was in the Navy, not the Army, they treated us like royalty. The whole thing was wonderful,” Eloise said.

“The shortest invitation and the longest marriage,” Bee laughed.

The couple had no time for a honeymoon because Bee had to be back on the ship immediately. She stayed with his family while she worked in a dry cleaners in Greenville. “We did go on a cruise to the Southern Caribbean 50 years later,” she said.

When Bee came home after his discharge from the service, he worked briefly in the insurance industry and eventually took a job with the former Chicago, Bridge and Iron Co. in Greenville. Together they raised Donald Jr., Margie, Bill and Jim.

They are in excellent health, Bee said, and try to keep busy. They get up at 5 a.m. three days a week and go exercise. “I make sure I never break a sweat. If that starts to happen, I slow down,” Bee joked.

They keep busy enjoying a player piano he restored. They have thousands of music rolls and both enjoy singing. He also restored a Victrola.

“Sometimes we take the piano to the old-folks home and play for them,” Eloise said.

They deny that there is a secret to a long, happy marriage. “It’s simple: Each of us put the other first. That’s it,” Eloise said.

“Sure we’ve had disagreements. Of course we have. But we don’t go bananas on each other. We don’t go to bed angry. We put our faith in the Lord and in each other,” Bee said.

“I think people now who get too far away from righteousness are cheating themselves. The Bible tells you how to live. I try to listen and be the best person I can.”

“And she hasn’t changed since I met her. She always zips around at 100 miles an hour. Well, maybe now she’s down to 80 miles an hour. She’s a kind person. And a great cook,” he said.

Bee also said he felt a special connection to the Navy chaplain who performed the ceremony on the USS Intrepid.

“We just had a moment. He seemed to get choked up for a minute. I think he understood the bond we had, both serving on the ship. I put my arm on his hand because he was trembling. We connected.”

HOUSTON — For more than seven years, no one has known what happened to $600,000 in checks and cash that was stolen from a safe at Pastor Joel Osteen’s Houston megachurch, which has one of the largest congregations in the country.

WASHINGTON — The Senate passed a stopgap spending bill Thursday that avoids a short-term shutdown and funds the federal government through Feb. 18 after leaders defused a partisan standoff over federal vaccine mandates. The measure now goes to President Joe Biden to be signed into law.

Baldwin: 'Someone is responsible' for shooting, but 'not me'

LOS ANGELES — Alec Baldwin said he feels incredible sadness and regret over the shooting that killed a cinematographer on a New Mexico film set, but not guilt.

Pushing COVID-19 boosters, Biden says 'we need to be ready'

BETHESDA, Md. — With rising numbers of COVID-19 cases predicted this winter, President Joe Biden on Thursday appealed for Americans to get their boosters and get behind his plan to tackle the new omicron variant through wider availability of vaccines and shots, but without new major restrict…