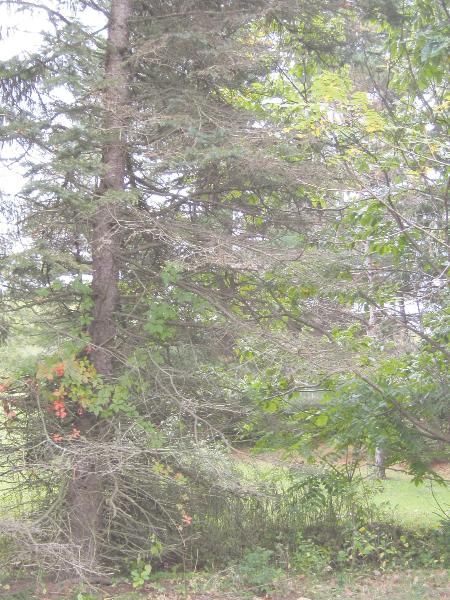 Many local blue spruce trees are showing the signs of a blight, such as this one where dead branches are slowly creeping up the tree. A blight, caused by fungus-like spores, is hitting the local blue spruce tree and there is no way to cure the tree once it has been hit, said Scott Sjolander, a Penn State Extension office urban forester who covers northwestern Pennsylvania. 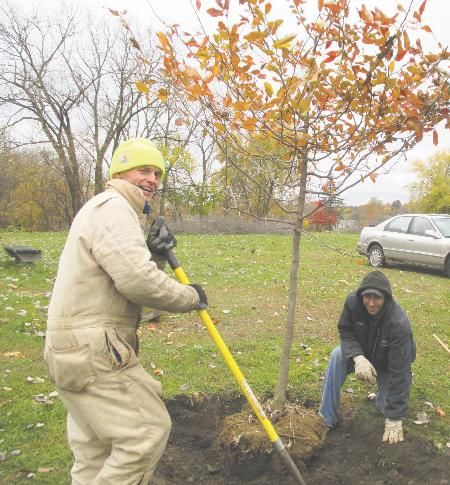 Scott Sjolander, left, plants a tree in Sharon as part of its ongoing beautification project with the help of a volunteer. Urban forestry is a relatively new field in agriculture which seeks to improve and sustain trees in urban and town settings.

Many local blue spruce trees are showing the signs of a blight, such as this one where dead branches are slowly creeping up the tree. A blight, caused by fungus-like spores, is hitting the local blue spruce tree and there is no way to cure the tree once it has been hit, said Scott Sjolander, a Penn State Extension office urban forester who covers northwestern Pennsylvania.

Scott Sjolander, left, plants a tree in Sharon as part of its ongoing beautification project with the help of a volunteer. Urban forestry is a relatively new field in agriculture which seeks to improve and sustain trees in urban and town settings.

A blight is hitting the trees in the region that is slowly killing them off. The blight, caused by fungus-like spores, hits the needles of the tree, which literally makes them starve to death, said Scott Sjolander, a Penn State Extension office urban forester who covers northwestern Pennsylvania.

The spores, blown by the wind, settle on the tips of the needles where the tree’s buds form. At first the spores do little or no harm.

“But it starts killing the buds in the second year and the needles start to die,’’ Sjolander said. “When that happens, chlorophyllcation ceases – which is the food-making function of the tree. When it doesn’t make food, the needle goes pale, then dries up and turns brown.’’

The blight tends to hit the lower part of the tree and steadily moves up the branches to the top.

Chemicals, known as fungicides, that can attack other harmful fungi-based blights are pretty much worthless for the ones hitting blue spruces.

“Some diseases we can apply a fungicide to the plant so the spores don’t take hold,’’ he said. “Those diseases have a specific season where the spores are active. In the case of the blue spruce, though, this isn’t a true fungus. It has no season so the spores in this case are growing all the time. You can’t effectively spray for it.’’

While the spores are attacking other trees, most notably hemlocks, it’s the blue spruce which is seeing the most devastation.

This isn’t a case where the spores have been newly introduced to the local environment.

“It’s been around forever,’’ Sjolander said. “But it eventually catches up with the mature blue spruces in this area.’’

A key factor in this blight is that blue spruce trees aren’t native to Pennsylvania or Ohio. The trees’ true home is in the greater Rocky Mountain region, such as Colorado. As a result, the tree has no natural defense against the methodical assault of the spores.

Once infected, keeping the tree watered can slow down the pace of spores’ attack.

“It’s slowly doomed,’’ Sjolander said of the tree after the blight hits. “It will eventually kill the tree. It’s a slow process that takes years.’’

Although the blue spruce can survive with as little as 10 percent of it crown intact, at that point most tree owners give it the coup de grace.

“If you only have 10 percent of the crown remaining alive it means 90 percent of the tree is dead,’’ he said. “By that time we get tired of looking at it so we cut it down.’’

Unfortunately, the removal and transportation of the disease-stricken trees has caused the blight to spread quicker than it would have naturally, he added.

Most of the blue spruce trees in the region tend to be older growth trees, as they became part of an lawn fashion trend in the 1960s and ‘70s.

“You saw every town have them and they were planted heavily along the streets,’’ he said. “Even as recent as three to four year ago they sold a lot of blue spruces they were pretty cheap for Christmas trees.’’

Although the blue spruce is considered a strong, high-quality wood used in a number of musical instruments, it was never planted here with the intent of harvesting them for lumber.

“They really were planted for just ornamental purposes,’’ Sjolander said.

As a result, these older trees tend to be the most susceptible to the blight.

“We humans tend to slow down and not have our systems fully charged when we get older,’’ Sjolander said. “The same is true for blue spruces, so the fungus catches up with them.’’

Michael joined The Herald in 1985 as business writer and is now business editor, overseeing veterans, business and consumer coverage, and takes photos. He graduated from the University of Pittsburgh with a degree in communications, writing and economics.