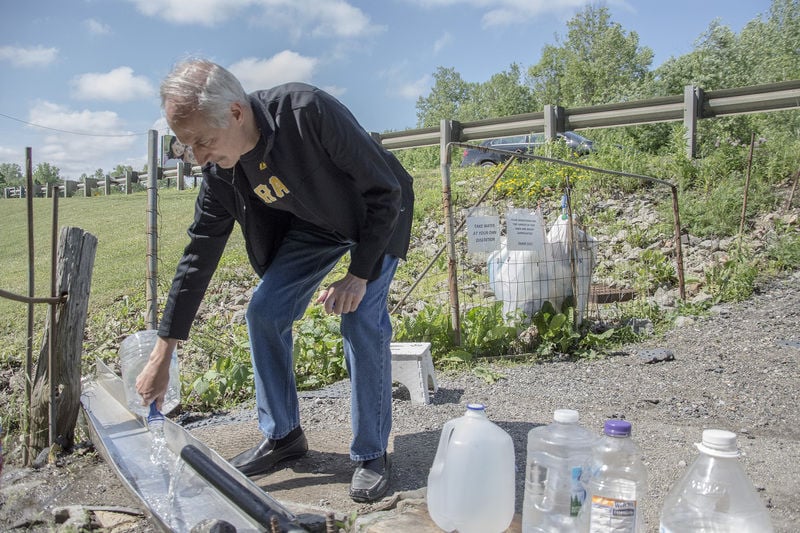 Mike Higgins of New Castle fills up one gallon jugs of spring water right off of Route 18 in West Middlsex. Higgins has filled up his water jugs for more then 10 years from the roadside spring. 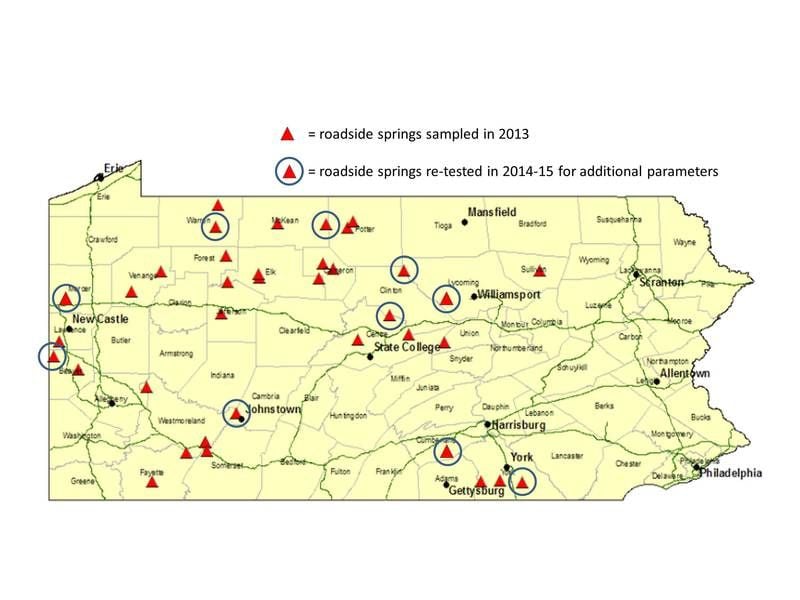 Mike Higgins of New Castle fills up one gallon jugs of spring water right off of Route 18 in West Middlsex. Higgins has filled up his water jugs for more then 10 years from the roadside spring.

WESTERN PENNSYLVANIA – A Penn State study of Pennsylvania roadside springs found 97 percent of them failed at least one drinking water standard. The popular spring in West Middlesex was among those that failed to pass a test.

Released last week, the study examined 35 roadside springs scattered throughout the state. An initial 2013 study of these water havens found 32 of them contained coliform bacteria. Follow-up tests were conducted in 2014 and earlier this year on springs which found nastier stuff in the initial study – including bacteria from poop.

“We found so many problems in 2013 we didn’t want to base our findings on just one water sample,’’ said Brian Swistock, Penn State’s water resources extension associate based at the university’s main State College campus.

Typically located along hillsides, low-lying areas or at the base of slopes, these springs for generations have serviced nearby residents or wayward travelers. Some have been prettied-up with stone or concrete to give it a manicured look.

Budget considerations limited the number of springs tested by Penn State, leaving some, such as the one near Fredonia, untested. An exact number of how many of these springs dot the Pennsylvania landscape is unknown.

Hailed by many locals as the best water they’ve ever tasted, the West Middlesex spring often has people standing in line with jugs in hand for a fill-up. Located on Route 18 past West Middlesex High School, for generations the spring has provided drinking water to thousands.

A 2013 test of the local spring revealed it contained coliform bacteria, Swistock said. Follow-up seasonal tests thereafter found the bacteria in every sample.

By itself, this particular bacteria isn’t necessarily bad for creating health problems.

A concern for West Middlesex and other springs are that drinking standards call for no coliform bacteria to be found – scored as 0 in tests. In the case of West Middlesex it scored 200.

“It might have scored higher because some labs will only go up to 200,’’ Swistock said. “Getting a 200 is pretty high.’’

But by no means should a skull and crossbones be erected in front of the local spring as being a killer, Swistock said.

“Having coliform bacteria doesn’t mean you will get ill,’’ he said. “But it does tell me there is a risk of drinking the water; it may be a very low one, but it is a risk.’’

However, other springs had far more foul results.

In Lawrence County a spring on Moravia Road tested by the college not only found coliform bacteria, but also the dreaded ecoli bacteria, Swistock said.

Ecoli bacteria is found when there’s animal or human poop around. Although the poop can come from farm livestock or leaky sewer pipes, it also can emanate from wildlife such as deer or squirrels.

Living in the digestive tract, some ecoli strains are harmless while others can cause bloody diarrhea, severe anemia or kidney failure which can ultimately lead to death.

It wasn’t determined what ecoli strains were found in this spring.

No further testing was conducted at that site.

Ingestion of just a few of these cysts are known to cause illness in humans.

Symptoms run the gambit of diarrhea, vomiting, chills, headache and fever which can last up to a month.

Collecting water samples at the Warren spring for the study was memorable for Gary Micsky. Housed at Penn State’s Cooperative Extension office in Coolspring Township, Micsky is an agriculture and natural resources educator.

Water from the Warren spring seeps out of a hillside and backs up, causing standing water beneath the pipe where people fill their jugs.

A simple experiment by Micsky revealed the pipe has a hole allowing the standing water – a breeding ground for germs and bacteria – to seep through.

“When you see the water come out at first you see this pristine, crystal clear water that looks great,’’ Micsky said.

“But after I stirred up the standing water what came out was this muddy, awful-looking water.’’

It’s the notion that the water coming out of these springs is the very best that mother nature has to offer is what often lures people to these sites, Swistock noted.

What people see and taste seems to be impeccably clean and unspoiled water.

When asked if either men would drink water from any of the springs in the study, both gave the same response – no.

“I would have to be pretty needy of water to drink from one of these springs,’’ Swistock said.

Michael joined The Herald in 1985 as business writer and is now business editor, overseeing veterans, business and consumer coverage, and takes photos. He graduated from the University of Pittsburgh with a degree in communications, writing and economics.

Partly cloudy skies during the evening will give way to cloudy skies overnight. Low 49F. Winds WNW at 5 to 10 mph.