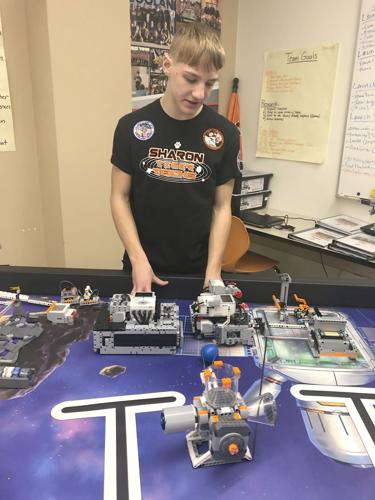 Eli Buck compares robots from last year’s competition with the ones his team made this year. Sharon Tiger Techs won at the Western Pennsylvania FIRST LEGO League championship tournament in Pittsburgh. 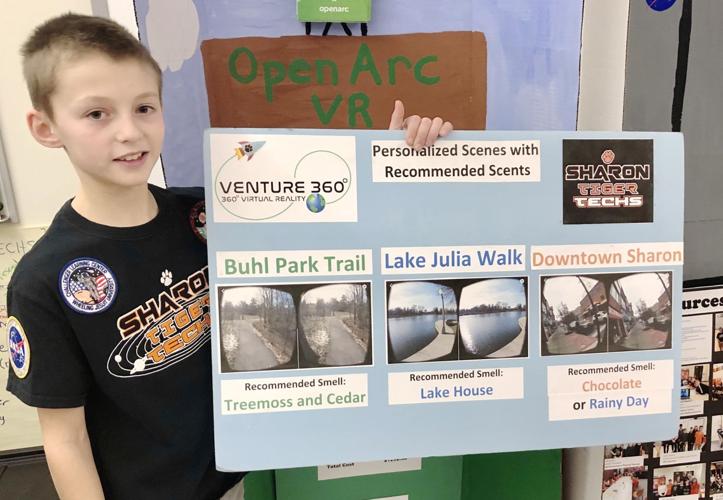 Ian Fischer explains his project. His team used virtual reality to give astronauts scenes and sights from home. 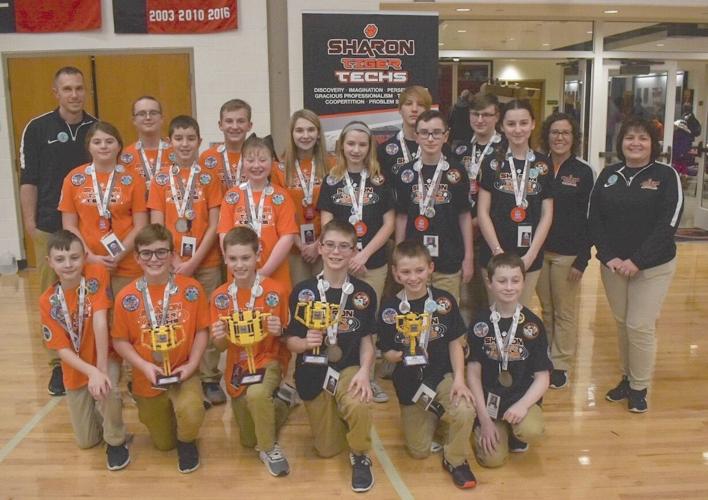 SHARON – The youngest members of the Case Avenue Elementary robotics program are learning what being part of a team means.

“It was hard to try to learn all the programming, but once the team starts to help you out and you all become friends, then it becomes easier,” said fifth-grader Mary Claire Brown, who is a first-year team member.

“You just learn how to do good,” Katelyn said. “You want to do good for your team.”

The Tiger Techs Orange Team also have learned how it feels to be grand champions. Placing first overall is a first for the Sharon robotics program.

“I was very stressed out and nervous about presenting,” Ian said. “But I knew I wasn’t alone.”

The Orange and Black teams are both advancing to the world stage after their performances at the Western Pennsylvania First Lego League championship tournament held Dec. 7 and 8 at Sewickley Academy in Pittsburgh.

Team Orange is the first team in the program’s nine-year history to win the First Place Champions Award, advancing them to the World Festival in Detroit in April when they will compete with 107 of the top teams from around the world.

And out of the more than 80 teams that participated in Sewickley, Team Black came in right behind their biggest rivals to capture the Second Place Champions Award and in addition, placed second in robot performance. They will advance to the North American Robotics Tournament held at Legoland in California in May.

The theme for this year’s robotics challenge, “Into Orbit,” centered on space travel and included three components — robotics, research and core values.

“It’s a suit that pushes fluids toward your extremities,” John said, explaining that some astronauts have trouble with their eyes because their blood rushes to their heads. “That’s what happens in space.”

Orange Team Leader Ramsey Brown, who is in the ninth grade at Sharon High, said the project became personal to the team.

“It can cause eye damage,” Ramsey said. “We found that out when we met with (astronaut) Mike Fincke, who had that problem. We Skyped with him and met him in person.”

In addition, the students spoke to several experts in the space field in addition to Fincke.

The Black Team’s project was about connecting astronauts to scenes and smells from home through virtual reality.

“We found the idea when we went to the Glenn Research Center,” said Eli Buck, a ninth-grader. “Once we know the topic for the year, we take trips and we start brainstorming. It takes a little bit to come up with the idea, but once we do, it gets the ball rolling.”

The Tiger Techs were also judged according to how they displayed the FLL Core Values, which focus on teamwork, gracious professionalism and “coopertition,” the ability to cooperate and compete in a professional manner.

“The Tiger Techs have demonstrated their passion for robotics through participating in 15 outreach events that impacted over 2,500 individuals with robots,” program director Dave Tomko said. “The Techs have actively helped more than 30 teams from around the world.”

The robotics teams, made up of fourth- through ninth-graders, are part of the FIRST Lego League organization. FIRST stands for “For Inspiration and Recognition of Science and Technology.” They are under the leadership of Tomko, Kelly Roys and Darcy Wiesen. The teams are funded by community sponsors from the Shenango Valley and the Sharon City School District.