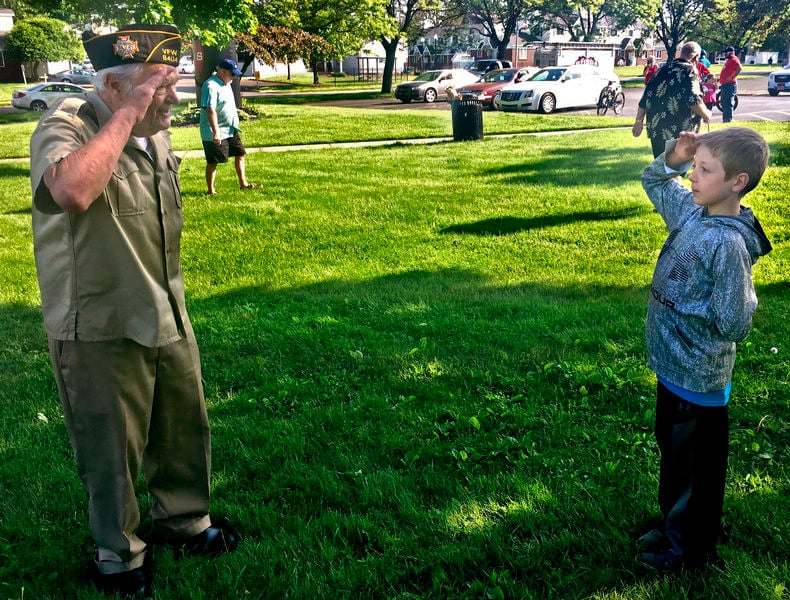 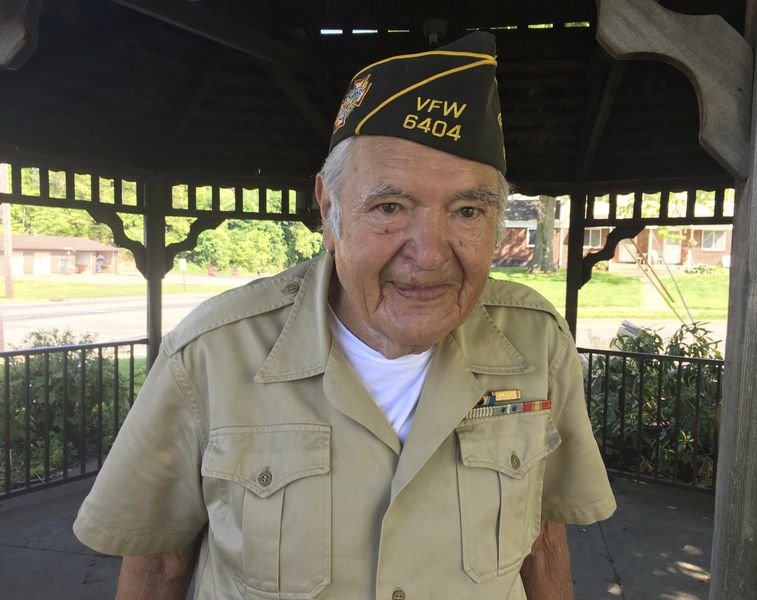 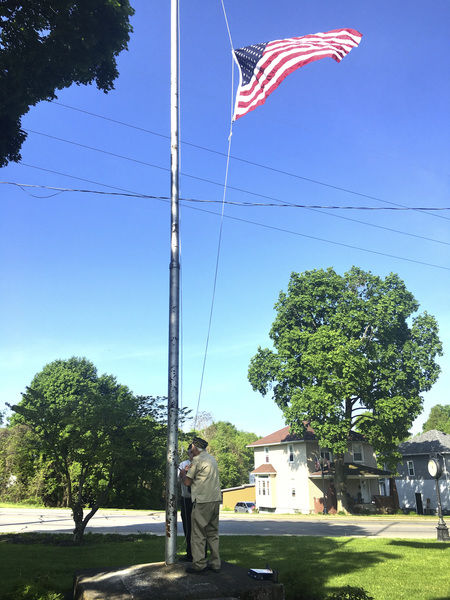 MICHAEL ROKNICK | HeraldThe American flag was hoisted at the Sharpsville Veterans Monument on Monday. Normally on Memorial Day the community has a parade with a remembrance event held at Riverside Cemetery. Due to COVID-19, those activities were canceled and replaced with a flag-raising ceremony where it was easier to keep a 6-foot social distance. About 50 attended the event.

MICHAEL ROKNICK | HeraldThe American flag was hoisted at the Sharpsville Veterans Monument on Monday. Normally on Memorial Day the community has a parade with a remembrance event held at Riverside Cemetery. Due to COVID-19, those activities were canceled and replaced with a flag-raising ceremony where it was easier to keep a 6-foot social distance. About 50 attended the event.

SHARPSVILLE – This Memorial Day in Sharpsville didn’t have the grand parade as in the past, but the flag-raising ceremony held in its place was more than good enough for Ed Volansky.

“I’m glad they had this,’’ said Volansky, a Sharpsville resident who served in the Navy during the Korean War. “It was good to see other veterans here, too.’’

Like other communities, Sharpsville curtailed its usual Memorial Day festivities honoring vets due to the COVID-19 pandemic. Instead, a flag-raising was held in the town’s Veterans Park.

Now 88, it brought back powerful memories for Volansky.

Raised in Farrell, just before the outbreak of the Korean War he and several of his high school chums drove over to Youngstown to join the Navy Reserve.

“We lied about our age to get in,’’ he said with a sly smile.

It immediately changed the military status of Volansky and his buddies.

“Instead of the Navy Reserves we were put in the regular Navy,’’ he said. “We were called up right away.’’

After basic training, Volansky was placed aboard the USS New Jersey, a battleship that already earned its claim during World War II. Its fights in that war include the battles of Iwo Jima and Okinawa in the spring of 1945.

With Volansky aboard, the ship sailed from Norfolk, Va., on April 16, 1951, bound for hostile waters.

“We sailed through the Panama Canal, and it took us about a month to get to Korea,’’ Volansky said.

Flicking through a history book of the New Jersey, it helped him remember some important dates.

It wasn’t long before the New Jersey found itself in action.

“We had it ready for a fight,’’ Volansky said of the ship.

The ship’s guns opened fire on May 20 for its first shore bombardment at Wonsan Harbor, which is in North Korea.

At times, the New Jersey was in the thick of action as its acclaimed 16-inch naval guns were called upon to attack the enemy scattered throughout various shores.

While Volansky was aboard the New Jersey, the ship was never attacked by an enemy vessel.

“I never even saw one enemy ship,’’ Volansky said. “I’m not sure if they even had one.’’

However, the ship did come under enemy fire from enemy guns on land. Fortunately, the ship was never hit, he said.

Regardless, the New Jersey was called upon to serve much of its time in hostile North Korean waters.

“We went way up the Peninsula, that’s for sure,’’ he said.

Navy records show the New Jersey inflicted major damage to the enemy by, among other things, destroying 75 buildings and 144 gun positions. During the ship’s time in action Volansky was called upon to work in a variety of duties that included dealing with the ship’s munitions.

“We were so far down into the ship we couldn’t hear when its guns were being fired,’’ he recalls.

As planned the vessel served six months in the war and was replaced in duty by another battleship, Volansky said.

For his time in enemy territory he was awarded two Bronze Stars for his service during the war.

After serving in the Navy for four years he settled back home and married. His wife, Louise, past away several years ago. Volansky retired after working 40 years at the former Sawhill Tubular Division pipe plant in Wheatland.

These days Volansky spends time with other veterans as he is a member of the Sharpsville Veterans of Foreign War and American Legion. posts

Ken Robertson, the Sharpsville borough manager, also was on hand for the flag raising.

“This is what we do,’’ Robertson said of the ceremony honoring veterans. “We will never forget them.’’

Other veterans participated, with a number of them in uniform.

While strolling through the park after the ceremony, Volansky was stopped by Paylen Clifford, 11, of Hermitage. The two had never met before. But Clifford gave the veteran a formal salute and waited until Volansky returned it before lowering his arm.

When asked why he saluted Volansky, Clifford gave a quick answer, “Because he’s a veteran.’’

Paulette, 66, of Masury, Ohio. Formal services: None, per her wishes. Family and friends will be notified of a celebration of life in the near future. Arrangements handled by LANE FUNERAL HOMES - MADASZ CHAPEL, 6923 Warren-Sharon Road, Brookfield, Ohio. Please visit www.lanefuneralhomes.com …

Paulette (Kollar) Morsillo, 66, of Masury, Ohio, passed away peacefully on July 7, 2020, in her home in Masury after an extended illness. Paulette was born on May 7, 1954 in Sharon, to August and Pauline Kollar. She was a 1972 graduate of Brookfield High School and worked for many years as a…