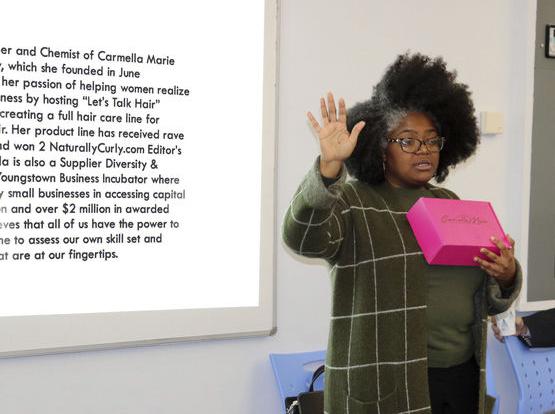 ERIC POOLE | HeraldCarmella Williams, founder and chemist for Carmella Marie Hair & Beauty Co., shows a box of her products during a forum for women entrepreneurs Wednesday at the Westminster College Entrepreneur Center. 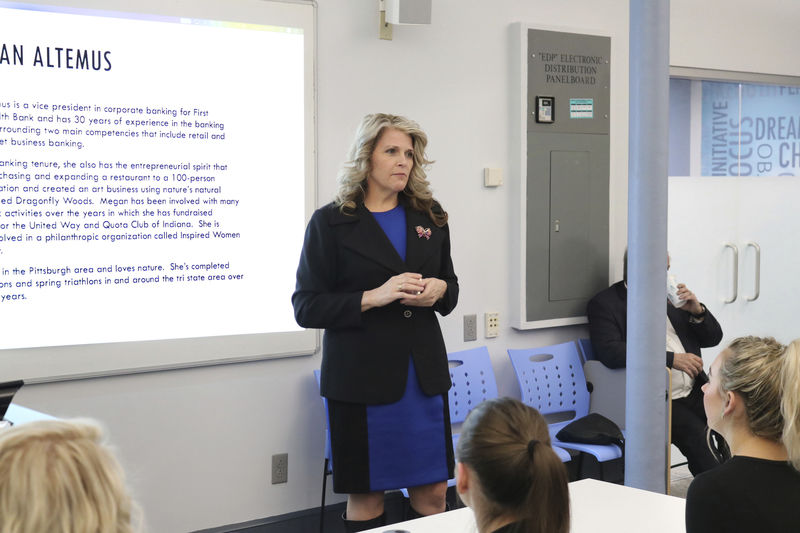 Megan Altemus, vice president of corporate banking for Commonwealth Bank, spoke about her work with the bank and operating a restaurant and art studio. 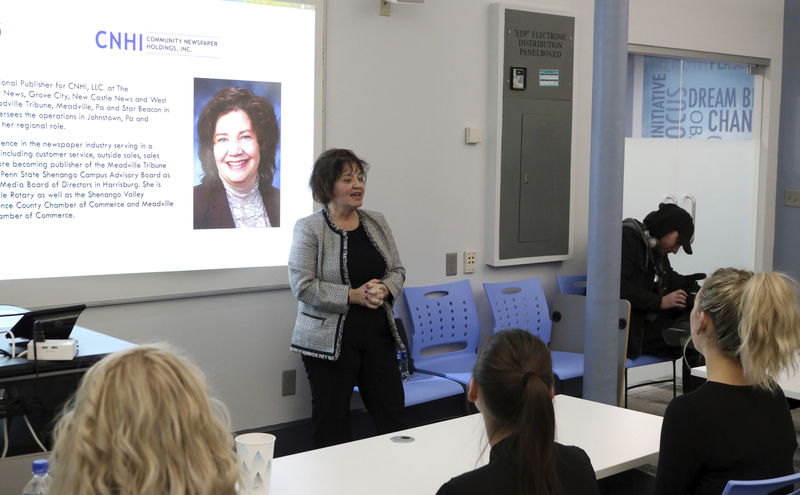 ERIC POOLE | HeraldSharon Sorg, publisher of several newspapers including The Herald, talks during a forum for women entrepreneurs Wednesday at the Westminster College Entrepreneur Center. 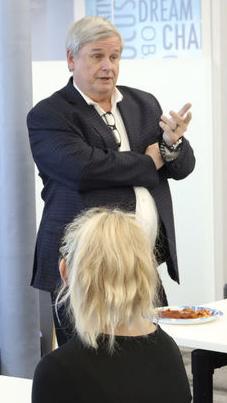 ERIC POOLE | HeraldRon Emery, board chairman for Youngstown SCORE, introduces speakers at a forum for women entrepreneurs Wednesday at Westminster College Entrepreneur Center. The event served as a kickoff for a support alliance between SCORE and the entrepreneur center. 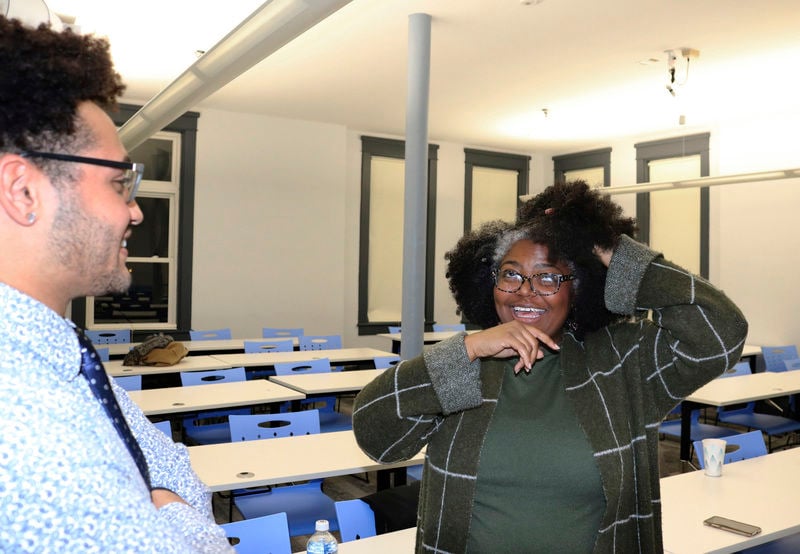 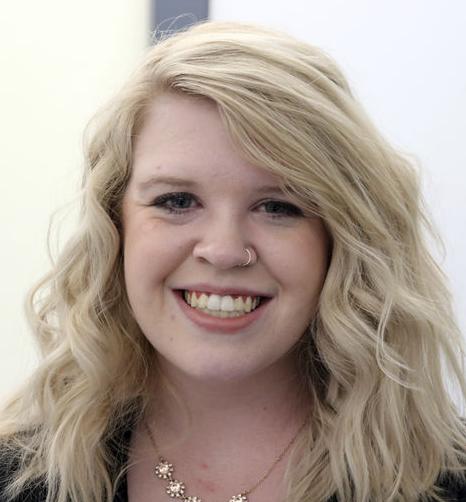 NEW WILMINGTON — After April Munson graduated with honors from Sharon High School, she enrolled in Westminster College, but things didn’t work out.

“I felt like I didn’t know what I was here for,” she said.

So Munson dropped out and went to work. Without a car, she was confined to working at places — McDonald’s in downtown Sharon and Quaker Steak and Lube — within walking distance of her home.

After she got a car, Munson expanded her occupational net to include retail work at the Grove City Premium Outlets and businesses in Ohio. But working several jobs fueled a desire for returning to college.

It won’t be. Now 28, Munson is a junior at Westminster College.

She’s still not sure what the rest of her life holds, but she’s going to have a college degree. Munson is studying in Westminster’s Entrepreneur Center, and she was among about 30 students who attended the center’s forum dedicated to women entrepreneurs Wednesday night.

The forum kicked off a cooperative effort between the entrepreneur center and Youngstown SCORE, an alliance of retired and semi-retired executives supporting other business people.

While the forum provided opportunities for entrepreneur center students to hear the stories of successful businesswomen SCORE board chairman Ron Emery said the event’s real value was in the networking opportunities.

Emery, who is about to release a book titled “How to Network at a Funeral,” told a story about meeting Dante Sienko, president of Westminster entrepreneur group. Sienko said he was interested in working with electric vehicles.

“My first answer is, ‘I’ve got a friend in France working on electric vehicles for Volkswagen,’ “ Emery said. “It’s all about how you network and how you connect the dots.”

Altemus, the first speaker, echoed Emery’s instruction about networking. In addition to her work with First Commonwealth Bank, Altemus operated a restaurant, and makes and markets art sculptures manufactured from natural materials under the name Dragonfly Woods. Most recently, she sought out a talent agent with an eye toward modeling and acting in movies.

She said her success as an artist is a fruit of marketing.

“If you don’t know how to network, it’s going to be really tough,” she said. “How do you think I’m selling my art? It’s through connections. Websites only sell so much. Social media only sells so much. You have to get in front of people.”

Sorg devoted part of her presentation to talk about the difficulties breaking into a male-dominated field. She was the first woman publisher at The Herald, which was founded in 1864, and at the New Castle News, founded in 1880.

After studying journalism, Sorg began her career at The Herald and tried to break into work as an advertising rep.

“Six times, my male advertising director looked me in the eye and said ‘I don’t think you’re ready,’” she said.

Finally, though, the ad director didn’t have a choice. One of the candidates he hired ahead of Sorg quit after only a few days. The director had to promote her as a stopgap until he could find a permanent replacement.

“I sold so many things that he couldn’t possibly send me back,” she said.

Williams’ success stemmed from her determination to overcome adversity and educate herself on hair care for black people.

After she was laid off for the second time, Williams saw a need in the market for hair product made of natural material for the diverse hair types and unique styling and care needs among the black community, made the creations in her third-floor apartment with little air conditioning, and tried them out on her friends and family.

Once a month, she brought the group together and asked them about their hair-care needs.

“I created a product every 30 days to fix that problem,” she said. “It didn’t matter what my training was, because I taught myself.”

The process took a few years, but Carmella Marie has found a niche in the market. Two of her creations have received Editors’ Choice Awards from NaturallyCurly.com., a website that serves people with curly hair.

Williams, who is active as a supplier and diversity consultant with the Youngstown Business Incubator, said her slow but steady development gave her the opportunity to have missteps when Carmella Marie was a small venture so she could succeed big when the business grew.

After the three speakers finished their presentation, the students and business people — including Emery and Eric Gaber, a business professor at Westminster and the school’s entrepreneur-in-residence — networked.

Gaber declared the event a success.

“This was a good kickoff,” he said.

The entrepreneur center will hold an event Feb. 29, with entrepreneurs who have sold their businesses. Discussions will include negotiating the sale of a valuable business, and what entrepreneurs do after cashing in a company.

Munson expressed gratitude to Westminster College, which helped her return to school as a single mother of two sons.

After dropping out of college the first time, Munson worked herself to exhaustion and slept away her few days off.

Munson said she worried that working, raising children and excelling academically could be a daunting task. But Westminster’s admissions department allayed those fears.