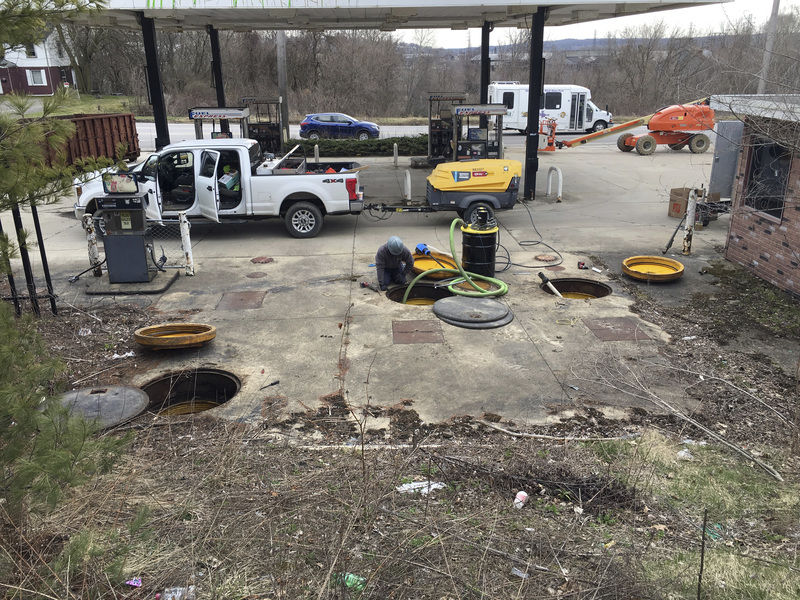 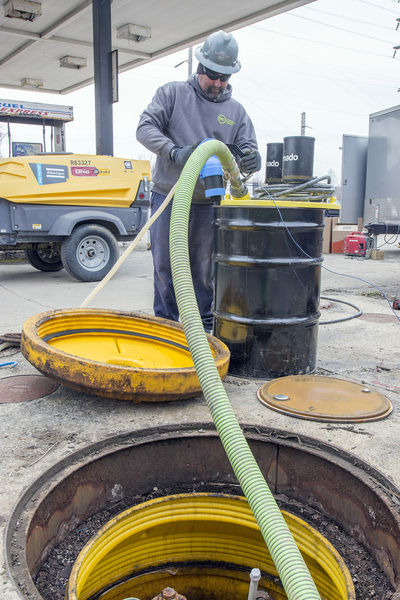 Mike Linkous, a laborer from Buck Elm Contracting of Worthington, Ohio, pumps years-old fuel from a tank at the old Fuel Express gas station on U.S. Route 62 in Masury. Clearing the property involves removing old fuel and any contaminated soil as well as eliminating asbestos in the small building before it is demolished. 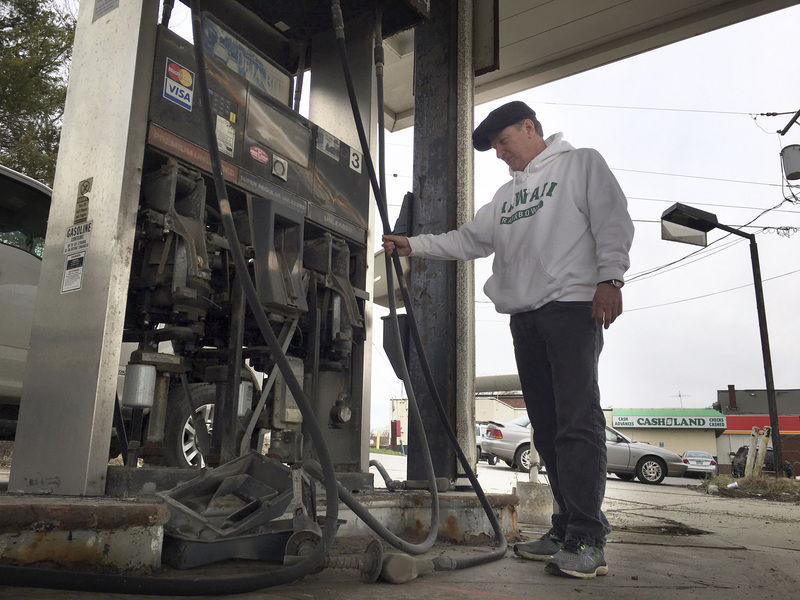 Gary Lees, a Brookfield Township supervisor, handles beaten pumps at the former Fuel Express station, located on South Irvine Avenue just inside the Ohio line. It’s taken years to reach the point of clearing the abandoned property. Lees said he would like to see an Ohio Welcome Center built there. 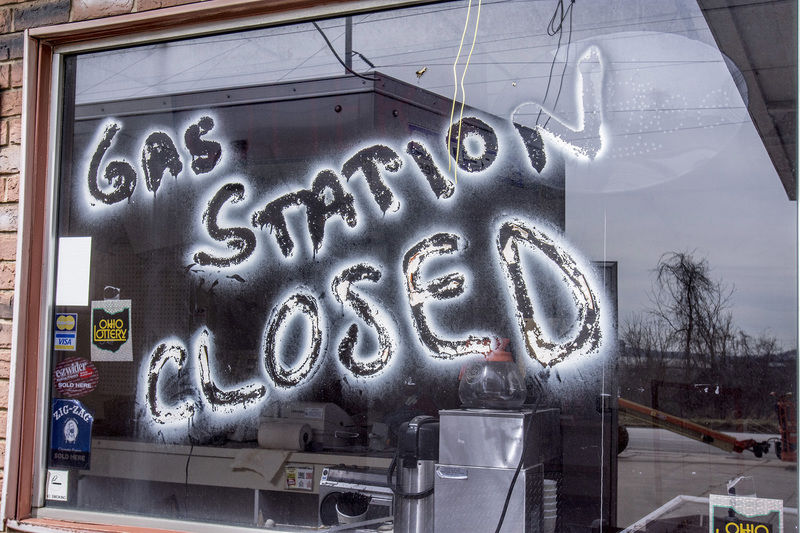 BROOKFIELD TOWNSHIP – After eight years of legal wrangling, workers began Tuesday with cleanup and demolition of an abandoned gas station in the township’s Masury area.

The former Fuel Express station, located along South Irvine Street just inside the Ohio line, has been a blight along one of the township’s main gateways, said Gary Lees, chairman of Brookfield Township trustees.

“People thought it was a nuisance,’’ Lees said. “It was just sitting here. But we had to wait for the legal process to play out. That was the irritating part.’’

Lees was on hand Tuesday at the long-closed gas station to watch Buckeye Elm Contracting begin remediation work. The Worthington, Ohio-based company was awarded a $250,000 contract to demolish the station and address any environmental hazards, including removal of the underground tanks used to store gasoline.

Chris Walker, a senior project manager for Buckeye Elm, said the project would take about three weeks to complete.

He estimated there was 100 gallons of gasoline remaining in the station’s underground tanks.

After eight years, you can’t use it like it is,’’ Walker said. “We’ll likely distill and recycle it as much as we can.’’

The underground tanks aren’t the only environmental hazard at the site. Walker said building on the property contains asbestos, which can cause cancer.

“The asbestos will have to be removed from the building before it can be demolished,’’ he added.

Buckeye Elm also will test the property to see if the soil contains any hazardous materials.

“We won’t know if anything is in the soil until after we take out the tanks,’’ Walker said.

Funding for the project came from an Ohio Bureau of Underground Storage Tank Regulations’ grant. The state agency helps pay for cleanup of abandoned gas and service stations throughout Ohio. Trumbull County Treasurer Sam Lamancusa said the bureau is funded by a portion of state tax payments made by those stations.

Getting to the actual cleanup of the station was a tortuous legal journey, Lamancusa acknowledged. But then again, that’s the typical process most abandoned stations have to go through, he added.

After closing the station eight years ago, the previous owners filed for Chapter 7 bankruptcy liquidation, he said. Trumbull County was able to foreclose on the property two years later and it was placed on sheriff’s sale list three years after that.

Since no buyer surfaced, it took several more years of legal maneuvers to get ownership of the property into the hands of the Trumbull County Land Bank, which pursued the grant. Lamancusa is president of the non-profit land bank, which takes ownership of blighted residential and commercial properties and rehabilitates them for reuse.

“Since the land bank was started 8 years ago we’ve demolished around 700 properties,’’ he said. “And we recently demolished a gas station in Girard that’s like the one in Masury.’’

He said other organizations and agencies, such as the Youngstown-Warren Regional Chamber of Commerce and the Trumbull Neighborhood Partnership, helped lobby for the Fuel Express cleanup.

Officials, including Brookfield trustees, are discussing on possible uses for the property once demolition is completed. Lees likes the idea of building a state welcome center at the site which would have bathrooms and offer tourists information on places to visit in the state.

Pennsylvania has welcome centers, including one along Interstate 80 in Shenango Township, about a mile from the Ohio border. If a center is a no-go, Lees said he would like to see, at least, a “Welcome to Brookfield” sign.

“We have some thoughts in mind here,’’ he said.