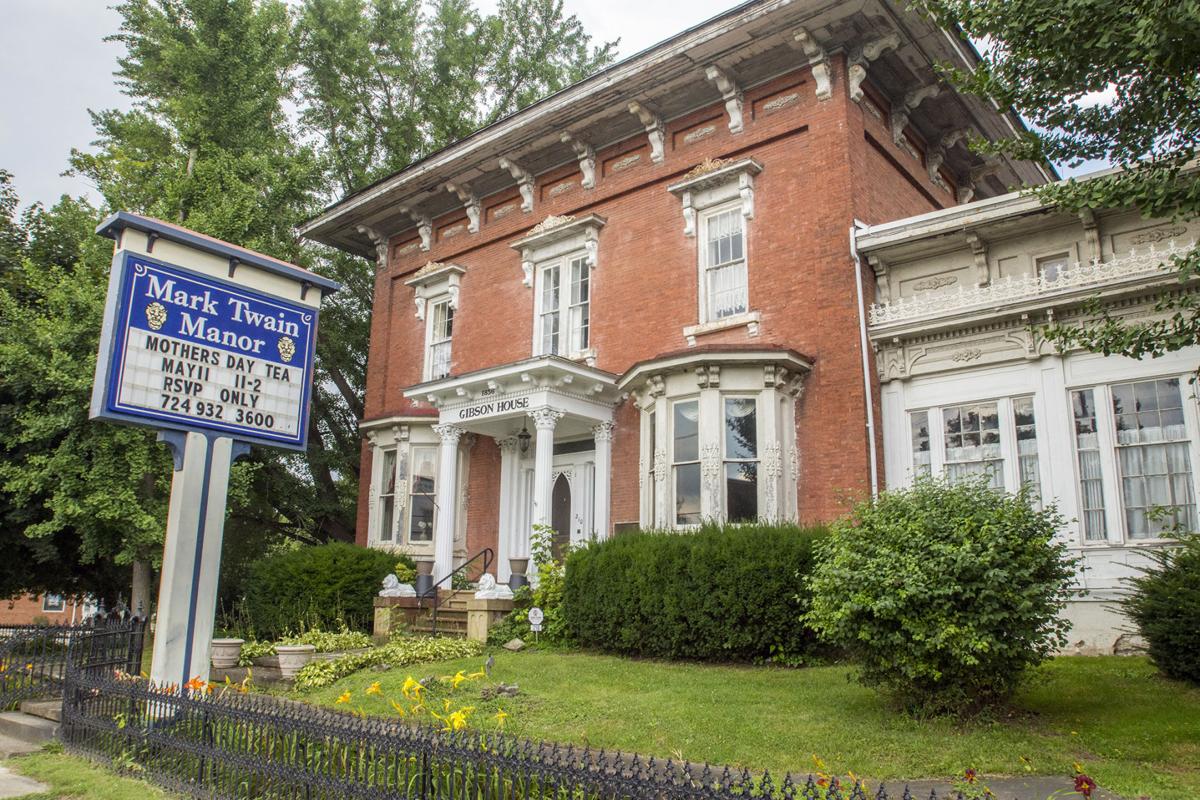 The Gibson house, or Mark Twain Manor, has a side porch enclosed as a restaurant dining room. 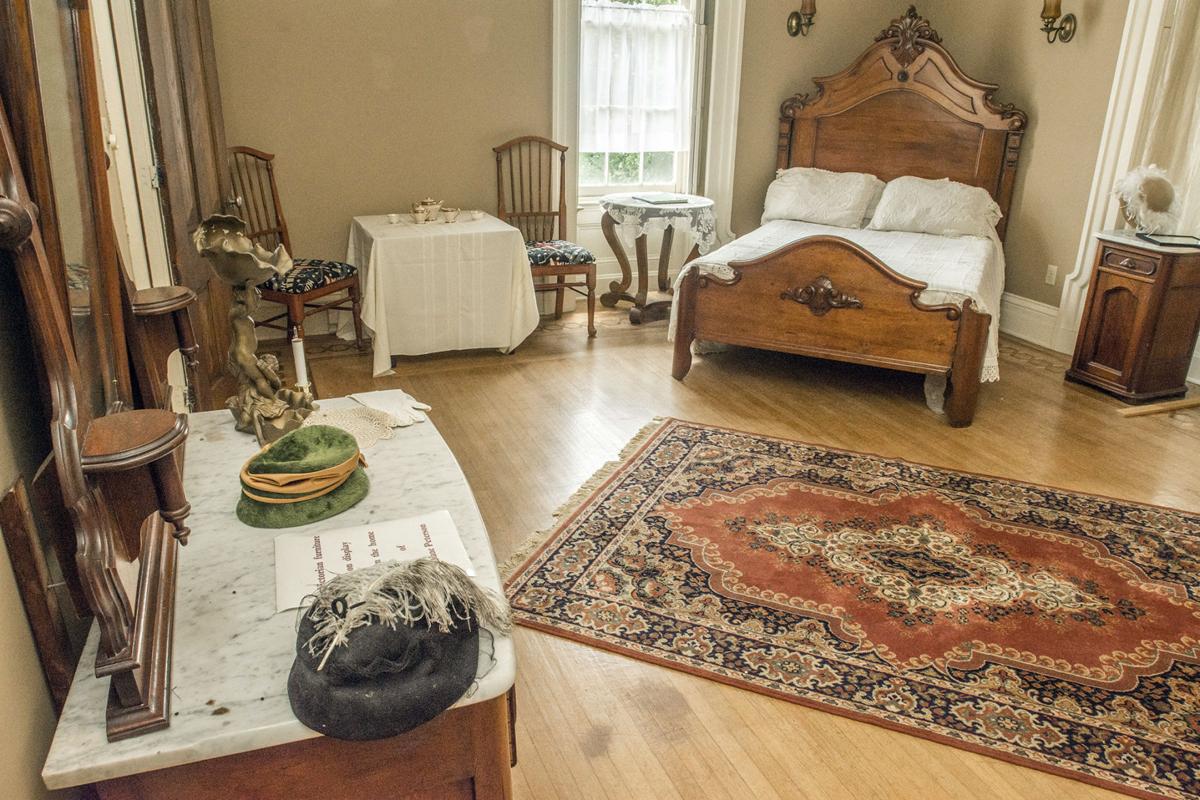 Period pieces furnish a room of the Gibson house in Jamestown.

JAMESTOWN – Lots of love by volunteers meant something in saving the Gibson mansion, but in the end, sturdy financial backing saved it from the wrecking ball.

“It was starting to go,’’ said Jeff White, a Jamestown resident who has studied the stately home. ‘Its roof was in really bad shape.’’

The elegant home, built in 1856 by Dr. William Gibson, is a crown jewel not only of Jamestown but also the region. Also called The Mark Twain Manor, it was named in 1978 to the National Register of Historic Places.

Its prior owner, the non-profit Jamestown Future Foundation, ran into financial difficulty maintaining the building. Even worse, the group couldn’t meet monthly payments on a loan it took out with the U.S. Department of Agriculture to keep it in shape. In 2014, the USDA was looking to foreclose.

“We couldn’t pay our bill,’’ said Jamestown Mayor Esther McClimans, who has been a passionate supporter of the home.

That’s when a private benefactor stepped up. The supporter, who asked to remain anonymous, created the Jamestown Historic Preservation Foundation to pay Jamestown Future's debts and provide funds for maintenance.

“If you look at the outside you can see the disrepair it’s in,’’ Scullen said. “It hasn’t been painted in a while.’’

Painters are expected to begin that work, along with restoring the home’s windows, by the end of summer.

“The foundation paid for a new furnace and air conditioning system,’’ McClimans said. “The contractor that did that was here day after day. I can’t imagine what that bill was like.’’

Located in Jamestown’s business district at 210 Liberty St., the house was meant to showcase Gibson’s wealth and stature. A native of Oswego, N.Y., the popular story is that he graduated from a New York medical college.

On his way to begin a medical practice elsewhere, Gibson passed through Jamestown.

Enamored with the small town, he decided to remain. Gibson built the brick home where he and his wife, Susan, lived and mingled with high society. In addition to his medical practice, Gibson delved into local real estate ventures, banking and railroads.

“He was a developer way before his time,’’ Scullen said. “He sort of developed Jamestown.’’

Gibson died in 1887 and his wife lived at the home until her death in 1905. The childless couple left the home to a business associate of Gibson, who then gave it to one of his children.

It eventually became a restaurant in the late 1950s. About that time, the owners added a large, modern kitchen onto the back to handle crowds.

Near the start of this century, the Jamestown Future Foundation took on the work of much-needed restoration.

There continues to be historical disputes over the home. Many in town believe the house was a stop on the Underground Railroad for runaway slaves seeking freedom.

Scullen believes that’s true and said a USDA official once confirmed it. The mansion has nooks and crannies where slaves would have hid, she notes.

White is skeptical of the Underground Railroad claim.

“During the time before the Civil War if slaves were caught in your home, (slave catchers) would probably burn the home down,’’ White said. That’s a risk the Gibsons probably wouldn’t have wanted to take, he added.

Also, that section of town likely faced constant flooding during that period. And what people believe are “hidden’’ rooms in the home’s basement would have been unusable for long stretches, White said.

And in the biggest row of all, did fabled American writer Mark Twain really spend time bunking up with the Gibsons at their mansion?

Generations have faithfully said it’s true and stand by the story that gives the home its second name — Mark Twain Manor.

There’s supposedly a photo of the period showing the back of Twain in Jamestown looking at members of the town’s Presbyterian Church congregation, McClimans said. But the photo’s whereabouts are unknown, said Sandy Laurie, a stalwart of the Jamestown Area Historical Society.

“Mark Twain did spend at least one night at the Gibson home,’’ Laurie said. “Mrs. Gibson let it be known for years that he stayed there. And the Gibsons’ maid told everyone that he definitely stayed there.’’

The most popular story told of Twain’s visit is that after arising from his sleep he bounded to the breakfast table in his bare feet wearing a bathrobe.

“Mrs. Gibson told him he wasn’t presentable and that he needed to go back up to the bedroom and get better dressed,’’ Laurie said.

And there’s documented evidence showing Twain knew the Gibsons – but he didn’t think much of them.

The Gibsons were among the passengers on a 1867 voyage with Twain to the Middle East. He wrote a series of newspaper articles about the trip that he later compiled and expanded into a best-selling book, “The Innocents Abroad.”

Gibson had obtained credentials from the Smithsonian Institution to collect relics, flora and fauna to bring back, and Gibson bestowed on himself the title, “commissioner of the United States of America to Europe, Asia and Africa.”

Without using the doctor’s actual name, Twain mocked the pompous title “thundering after his name in one awful blast.”

To the humorist’s thinking, “when the United States considered it necessary to send a dignitary of that tonnage across the ocean, it would be in better taste, and safer, to take him apart and cart him over in sections in several ships.”

On March 20, 1869, Twain spoke in Sharon to promote his book. He lectured at Thompson’s Hall, located on the northwest corner of East State and Railroad Streets, and stayed at least one night across the street at the Shenango House hotel. It was during this period, Laurie said, that Twain ended up in Jamestown and spent a night at the Gibsons’ home.

Twain wrote a letter to a friend a few weeks after his talk in Sharon. He wrote that a couple who was with him on the trip came to hear him lecture.

Twain’s letter is used by some to say he wouldn’t have stayed with the Gibsons. Also, there’s no record of Twain saying or writing he did stay at their home.

Regardless of whether its namesake ever graced its threshold, Mark Twain Manor remains striking.

With ornate woodworking on floors, walls and ceilings throughout its interior, the mansion dazzles visitors. None of the Gibsons' original furniture remains, but the Future Foundation is working to get in pieces from that period.

The group holds fundraisers throughout the year, including as offering tea parties, and its rooms can be rented out for parties.

Among the possibilities, a winery at the home’s carriage house is being discussed, Scullen said.

“The volunteers who come here are committed to keeping it intact,’’ McClimans said.