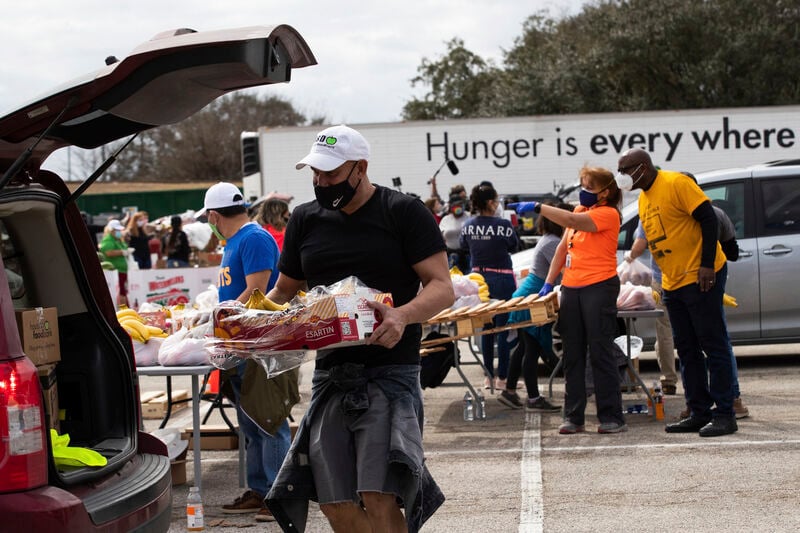 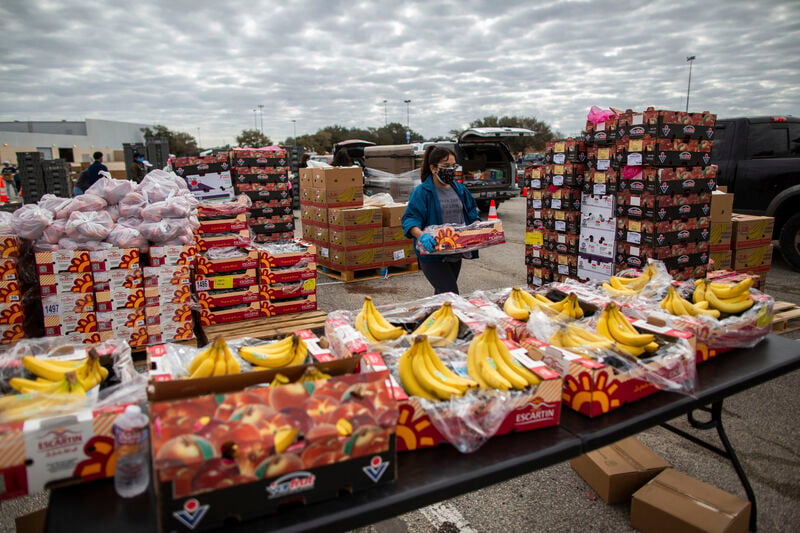 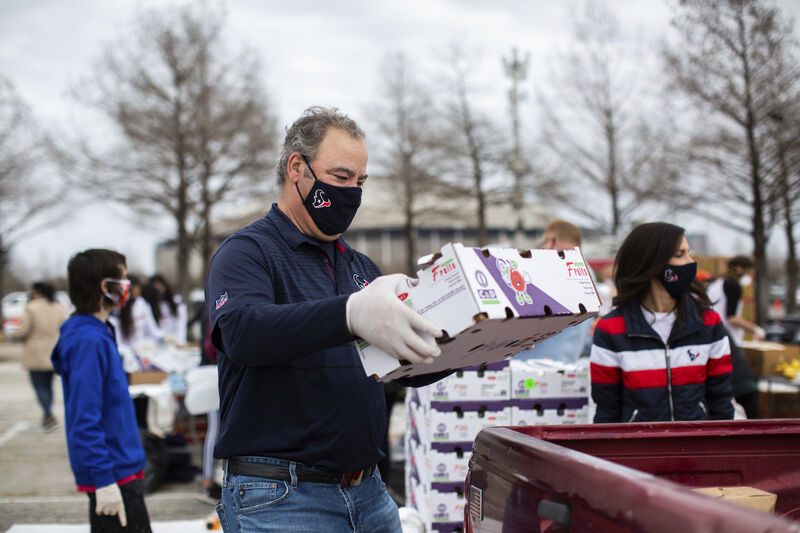 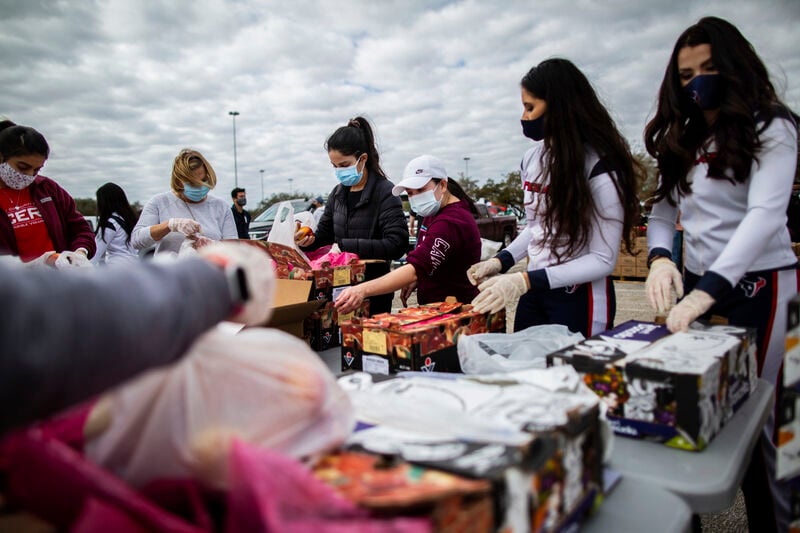 Texans Cheerleaders and other volunteers pack food to distribute to hundreds of people picking up supplies from their cars after frigid temperatures left the Houston area depleted of resources, Sunday, Feb. 21, 2021, in Houston. (Marie D. De Jesús/Houston Chronicle via AP) 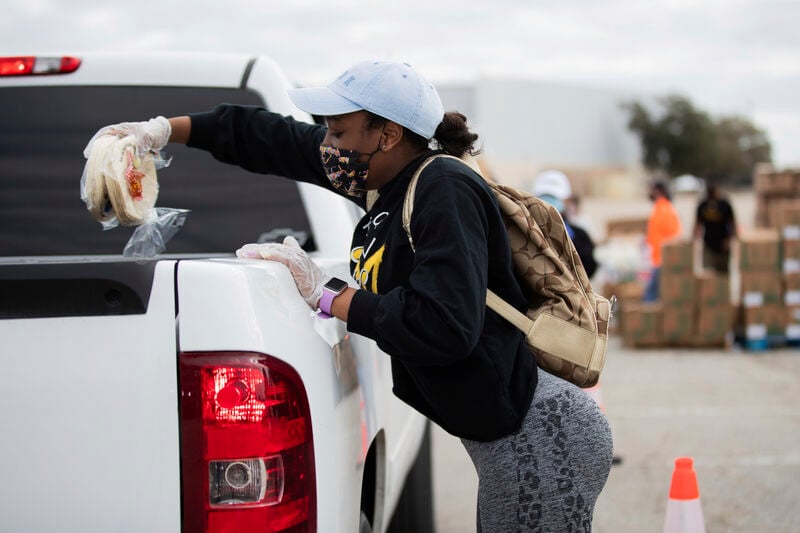 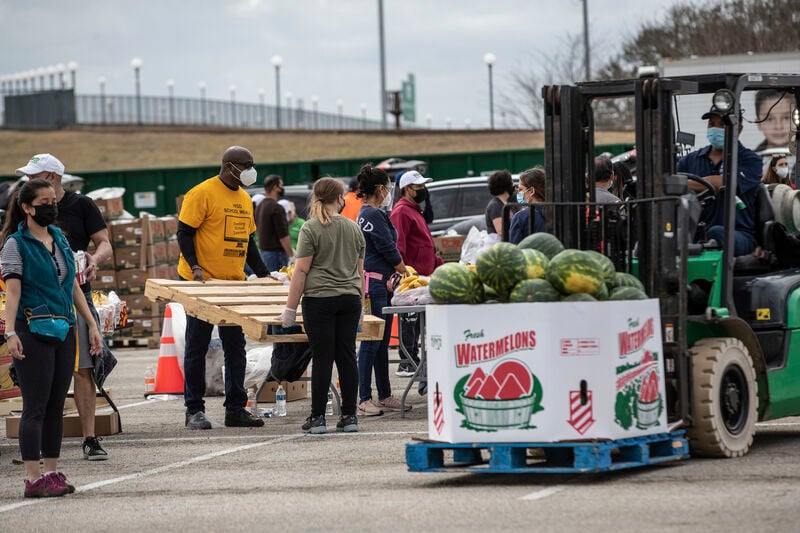 APHISD employees as well as Houston Food Bank employees and volunteers work together to distribute food to people in need at the NRG Park Sunday in Houston. The event is part of city wide efforts to provide the community with support after a freeze left Texans with depleted resources. 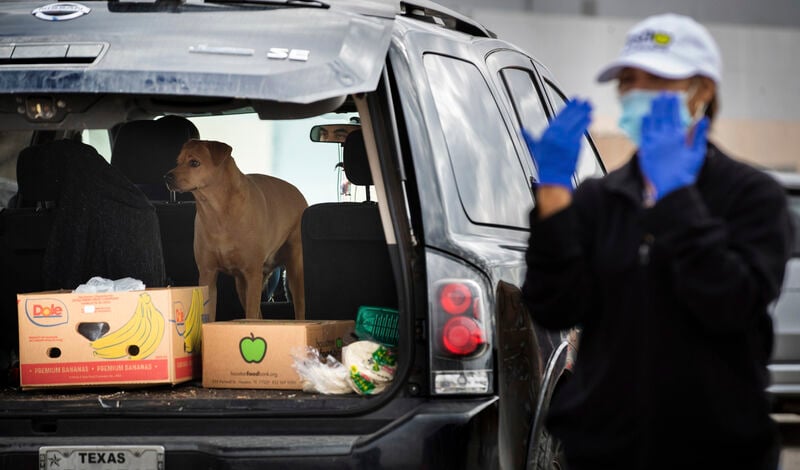 A dog looks around as the car of the owner is carrying supplies provided by the Houston Food Bank during a food distribution event, Sunday, Feb. 21, 2021, in Houston. (Marie D. De Jesús/Houston Chronicle via AP) 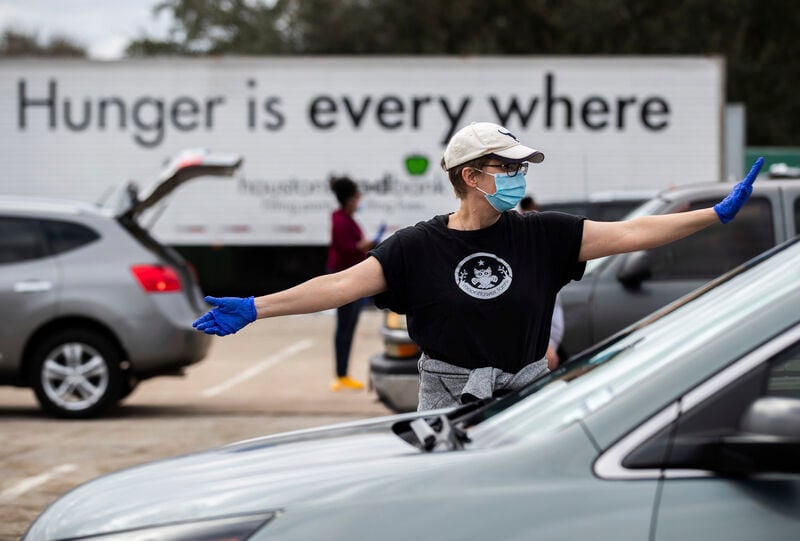 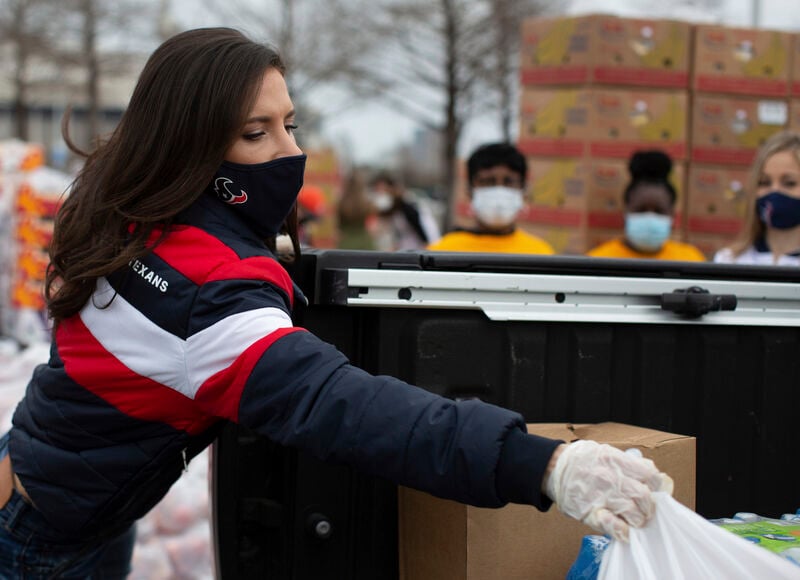 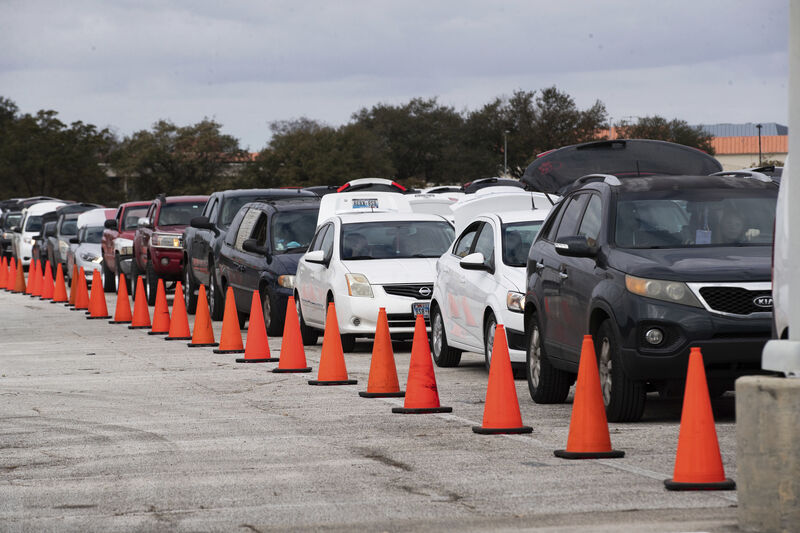 Texans Cheerleaders and other volunteers pack food to distribute to hundreds of people picking up supplies from their cars after frigid temperatures left the Houston area depleted of resources, Sunday, Feb. 21, 2021, in Houston. (Marie D. De Jesús/Houston Chronicle via AP)

APHISD employees as well as Houston Food Bank employees and volunteers work together to distribute food to people in need at the NRG Park Sunday in Houston. The event is part of city wide efforts to provide the community with support after a freeze left Texans with depleted resources.

A dog looks around as the car of the owner is carrying supplies provided by the Houston Food Bank during a food distribution event, Sunday, Feb. 21, 2021, in Houston. (Marie D. De Jesús/Houston Chronicle via AP)

HOUSTON — Hospitals across the South grappled with water shortages Sunday as the region carried on with recovery efforts in the wake of a devastating winter storm, and the weather offered a balmy respite — temperatures as high as the mid-60s.

At the height of the storm, hospitals were left scrambling to care for patients amid record cold, snow and ice that battered parts of the country more accustomed to going through winter with light jackets and short sleeves. The icy blast ruptured water mains, knocked out power to millions of utility customers and contributed to at least 76 deaths — half of which occurred in Texas. At least seven people died in Tennessee and four in Portland, Oregon.

A rural hospital in Anahuac, Texas, about 50 miles east of Houston, lost both water and power.

William Kiefer, CEO of Chambers Health, which runs the hospital along with two clinics and a wellness center, said the facilities resorted to backup generators and water from a 275-gallon storage tank. They refilled it three times using water from a swimming pool in the wellness center.

On Monday, when temperatures were in the teens, a woman about to give birth walked into the hospital after she could not make it through the ice and snow to her hospital in suburban Houston. Emergency room staff delivered the baby safely, Kiefer said.

“It would have taken her another two hours to get to (the suburban Houston hospital) if our facility wasn’t there,” he said. “We can probably assume she would have had the baby in her car and the snow. Not a good situation.”

Water was restored Thursday, and operations had returned to normal on Sunday, he said. The health system plans to look into installing more sophisticated backup systems, he said.

Houston Methodist Hospital spokeswoman Gale Smith said water had been restored at two of the system’s community hospitals. The system is dealing with an influx of dialysis patients after their local centers closed, she added.

After temperatures plunged as much as 40 degrees below normal last week, the forecast for the Houston area called for a high of 65 degrees on Sunday. The city lifted its boil-water advisory on Sunday afternoon.

Still, hundreds of cars lined up at NRG Stadium to receive food and water from the Houston Food Bank. The bank also delivered supplies to vulnerable citizens, including seniors and the disabled.

Memphis, Tennessee, saw 10 inches of snow last week. Memphis, Light, Gas & Water issued a boil-water advisory on Thursday out of concern that low water pressure caused by problems at aging pumping stations and water main ruptures could lead to contamination. The advisory was still in place Sunday; utility officials said they did not know when they might lift it.

About 260,000 homes and businesses were under the advisory. Hospitals and nursing homes have been forced to switch to bottled water. The Tennessee National Guard was supplying St. Francis Hospital with water.

Nearby Baptist Memorial Hospital has taken on some of St. Francis’ patients, particularly those who need dialysis, said Dr. Jeff Wright, a pulmonary and critical care physician at Baptist. That hospital has a water purification system for dialysis and has water reserves for tasks such as cooking and bathing patients, he said.

“We have gallon jugs of water that were already stocked and ready to roll on day one,” Wright said.

Methodist Le Bonheur Healthcare also reported problems at some of its Memphis-area facilities due to water pressure problems and the boil advisory. The system is using tanker trucks to boost water pressure and relying on help from facilities that have not been affected.

Flights resumed Saturday at Memphis International Airport after everything was grounded Friday because of water pressure problems. Some problems still lingered, but airport officials set up temporary restrooms.

The White House said about a third of the COVID-19 vaccine doses delayed by the storm were delivered over the weekend.

The weather created a backlog of about 6 million doses as power outages closed some vaccination centers and icy weather stranded vaccine in shipping hubs. White House press secretary Jen Psaki told ABC’s “This Week” that about 2 million of those doses have gone out.

Due to the wintry mess, local health officials last week vaccinated more than 500 people with doses that otherwise would have expired, including hundreds at homeless shelters and residents of a historically Black neighborhood who were mostly seniors with underlying health conditions.

Nearly 230,000 customers across the South were still without power as of Sunday, according to PowerOutage.us, a website that tracks power outages. The largest blackouts were in Mississippi, Texas, West Virginia, Kentucky and Oregon. Each state had more than 30,000 customers without power.

President Joe Biden is eager to visit Texas, which was hit especially hard by the weather, Psaki said. Biden hopes to travel to the state this week but “doesn’t want to take away resources” from the response, she said. Biden declared a major disaster in Texas on Saturday.