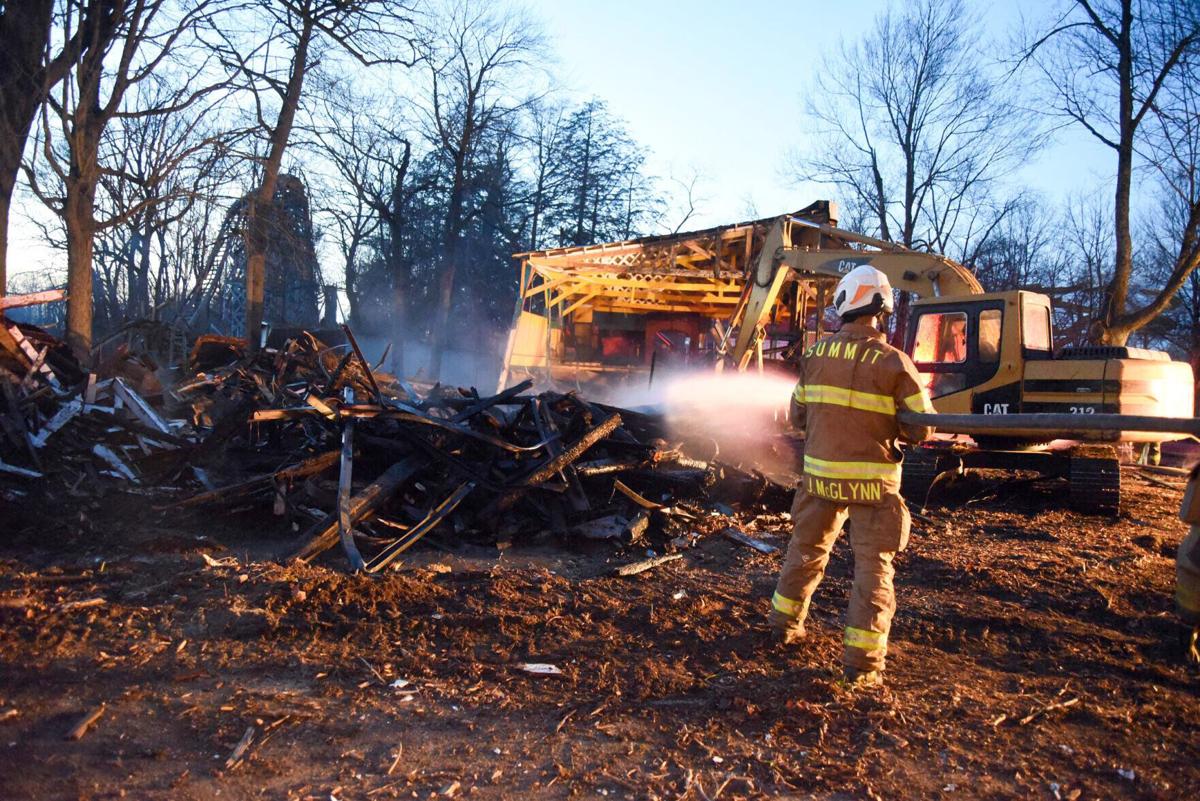 A Summit Township firefighter sprays the smoldering remains of the Blue Streak Tuesday evening. The park’s owner now says he already was demolishing the wooden roller coaster when it caught fire. 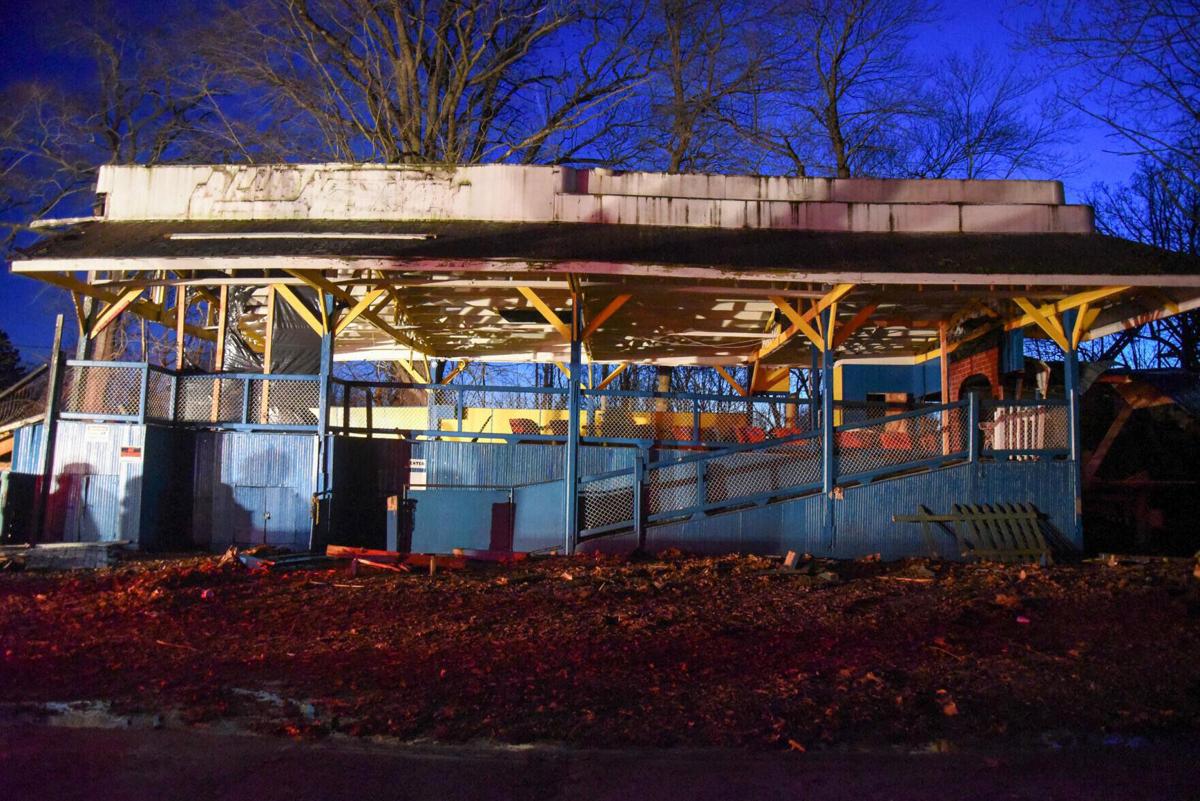 The entrance to the Blue Streak roller coaster sits silently Tuesday evening, minus the sign along its roof line but with with a car queued up waiting for passengers who will never ride it again. 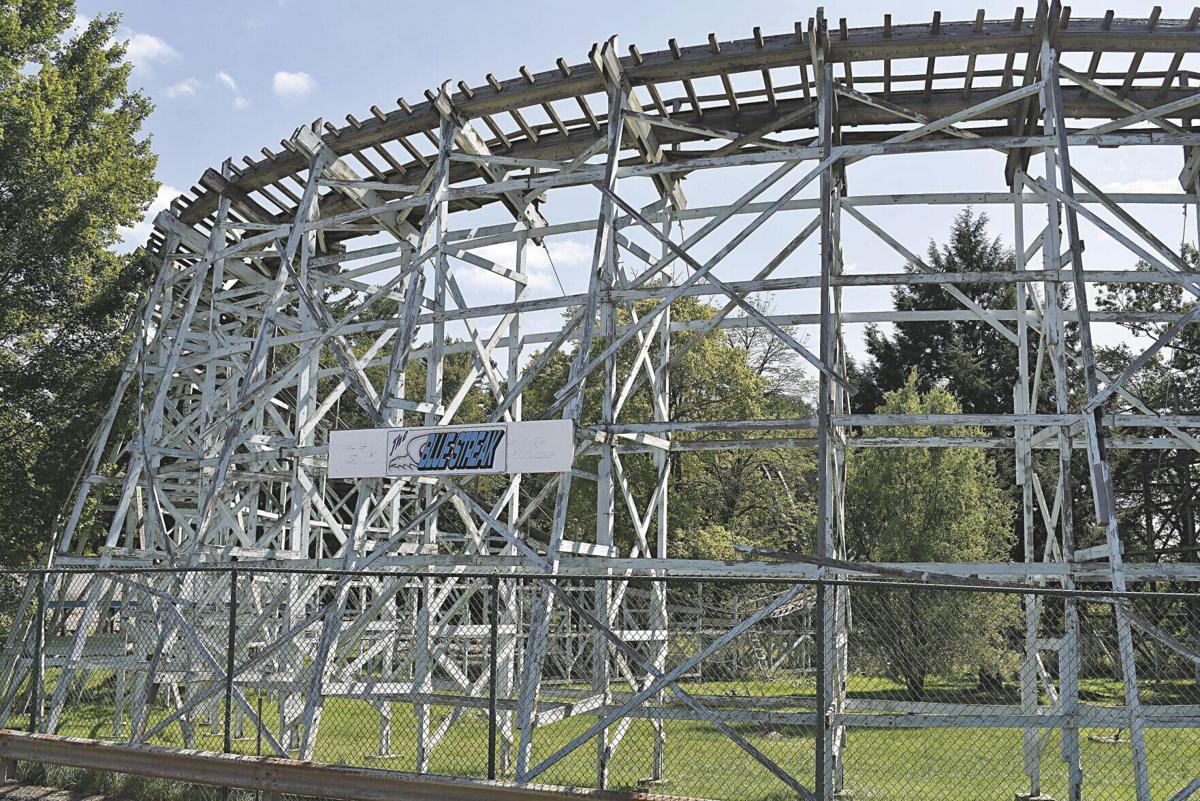 The Blue Streak roller coaster, which first opened during Conneaut Leak Park's 1938 season, did not operate for the abbreviated 2021 season, and the amusement park had been closed due to the pandemic in 2020. The park dates back to 1892.

SUMMIT TOWNSHIP, Crawford County — A demolition permit for Conneaut Lake Park’s Blue Streak roller coaster from Summit Township was in place Tuesday prior to fire departments responding to a late-afternoon fire at the park.

However, Randy Fyock, the township’s zoning officer, confirmed to the Tribune early Tuesday night that a demolition permit for the Blue Streak was not to be issued until Wednesday. He said a demolition permit had not been approved for Keldon prior to Tuesday’s fire.

Contacted Wednesday about the apparent inconsistency, Fyock told the Tribune he had given Keldon “a verbal commitment” to move forward with the demolition. However, that didn’t explain how or why a signed demolition permit dated Jan. 4 was issued.

“Don’t call me for nothing,” Fyock said before hanging up.

Keldon requested several controlled burn permits for debris from the township in early December. A recipient fills out a burn permit and coordinates its use with Summit Township Volunteer Fire Department.

Peter Albaugh, a fire marshal with the township’s fire department, told the Tribune that Keldon’s burn and demolition permits were in order. Keldon was using small burn piles to dispose of wood from the roller coaster’s demolition. “They were doing it (burning) to help clean up,” Albaugh said Wednesday.

O’Meara said the fire got out of control due to shifting winds. While one pile was being burned, winds shifted and ignited an adjacent pile without initially being noticed by workers. Flames from the second burning pile were what reached the Blue Streak, according to the chief.

New Conneaut Lake Park issued a statement via its Facebook page late Tuesday night saying damage to the Blue Streak was not caused by fire but from heavy equipment used in the demolition of the historic coaster.

“A burn permit was also issued to have small controlled fires to burn the wood as demolition continued. A mechanical issue occurred to the heavy equipment used to assist in the control, causing the fire to spread to the front part of the loading dock,” the statement said.

“Only after u [sic] retract,” Todd Joseph of Keldon Holdings LLC wrote via text when contacted Wednesday afternoon by the Tribune for comment about Keldon Holdings’s demolition permit for the Blue Streak.

Joseph was concerned over Fyock’s comment published Wednesday regarding the demolition permit not being issued.