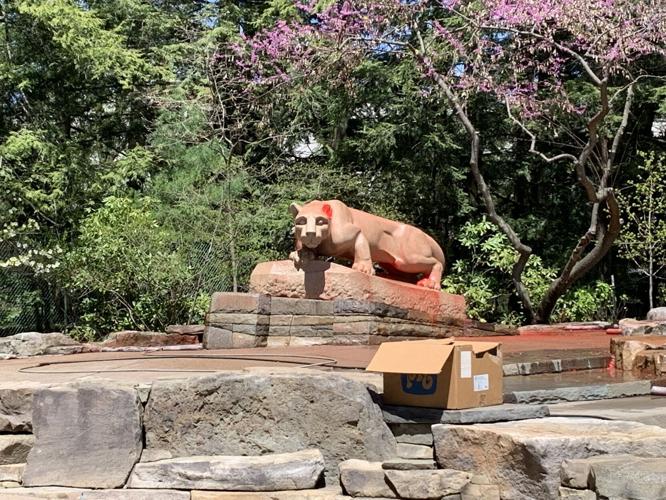 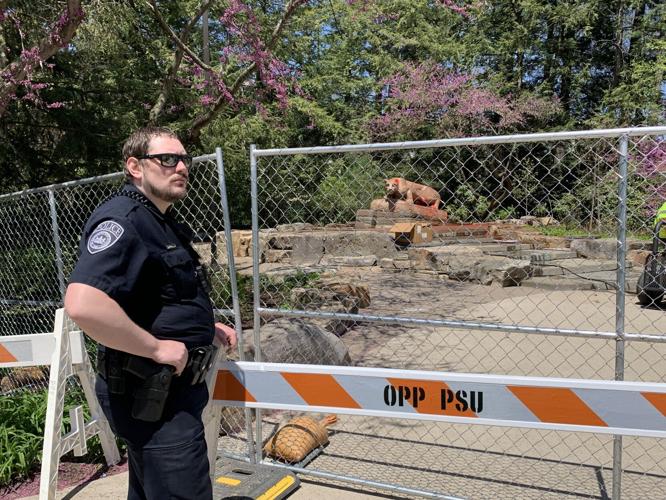 Penn State University police officer Jason Crants stands guard at the Nittany Lion Shrine on campus as university workers were removing red paint from the structure after an act of vandalism on Sunday, May 8, 2022.

Penn State University police officer Jason Crants stands guard at the Nittany Lion Shrine on campus as university workers were removing red paint from the structure after an act of vandalism on Sunday, May 8, 2022.

STATE COLLEGE – Rather than the steady stream of visitors gathered around Penn State University’s Nittany Lion Shrine for pictures Sunday on a typical graduation weekend, a chain-link fence occupied a portion of the popular university landmark’s perimeter after it and two other campus landmarks were vandalized.

The Nittany Lion Shrine, the Hintz Family Alumni Center and Old Main were defaced with red paint overnight on Saturday.

Paint damage to the Nittany Lion Shrine, however, remained visible even through the chain-link fence and the blue tarpaulin protecting the statue. Red paint covered the lion’s broken left ear, and red paint remained on its base and areas surrounding the statue.

On Sunday evening, passersby stopped to peek through the fence, and drivers slowed their cars to look out of their windows. Three students stood against a brick wall that bordered the perimeter to take a glimpse of the defaced statue.

“It’s actually the one place I didn’t take graduation pictures,” said Carolyn Osborne, who graduated on Sunday. “I was thinking of coming by after graduation, and the first thing I saw when I went on Instagram this morning was that someone vandalized all these major landmarks, which is a little insulting that it happened on graduation day, as well.

“I was going to take a picture – I just couldn’t. I saw on Instagram that they cleaned it up a little, but I guess it didn’t work.”

“Overnight, vandals broke an ear and splashed red paint on the Nittany Lion Shrine,” the school said in a statement. “The site is being fenced off and police are investigating. It will not be available for commencement photos. Additionally, red paint was used to graffiti Old Main and the Hintz Family Alumni Center.

“These are profoundly disturbing acts at a time when many families are taking photos and celebrating the educational accomplishments of their graduates.”

Penn State has asked those with information regarding the incidents to contact university police at 814-863-1111 or to submit an online tip at www.police.psu.edu/report-crime.