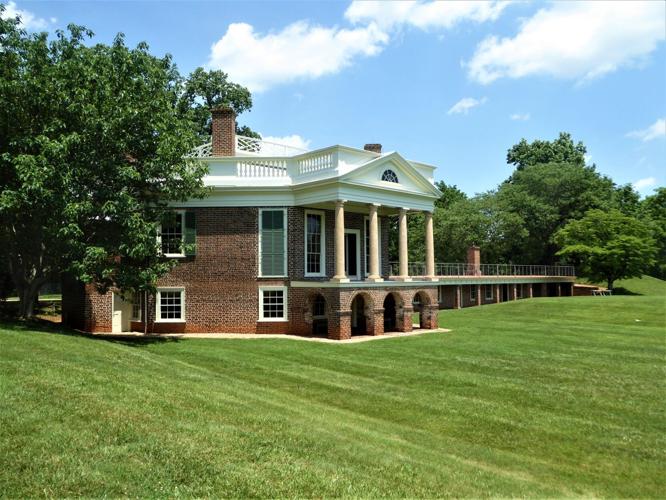 Poplar Forest’s basement, south portico and service wing are visible only from the back side. 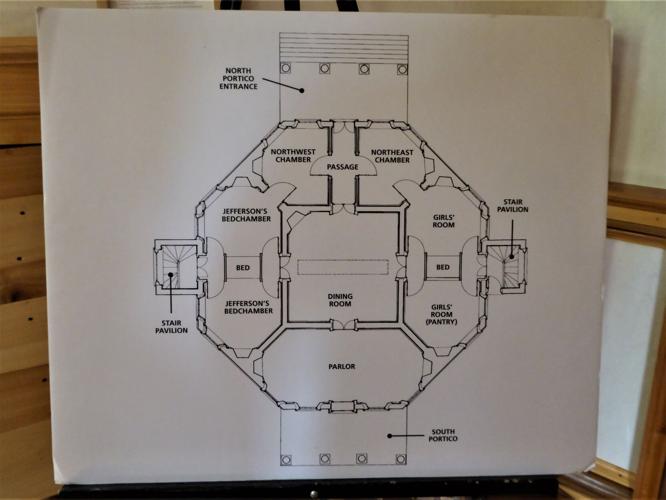 A poster illustrates the floor plan of Jefferson's Poplar Forest. 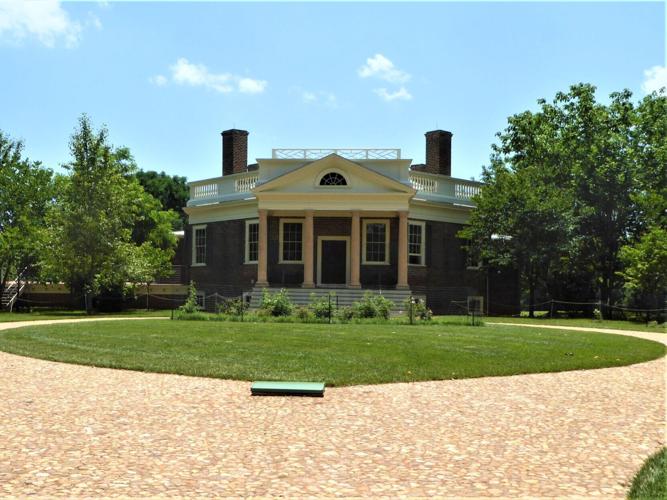 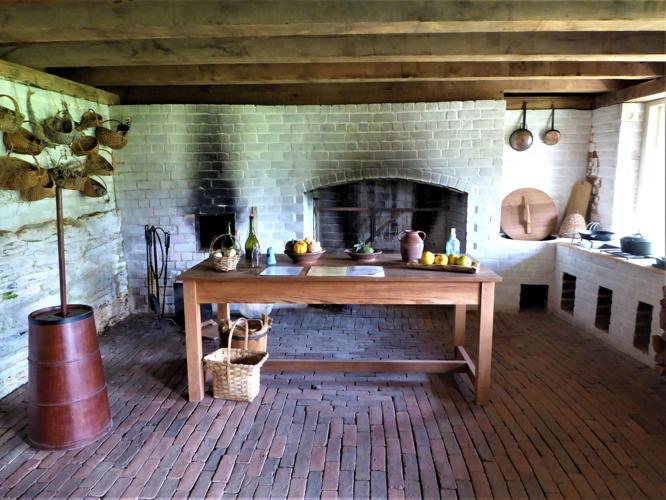 A kitchen with an expansive fireplace is in the home’s service wing. 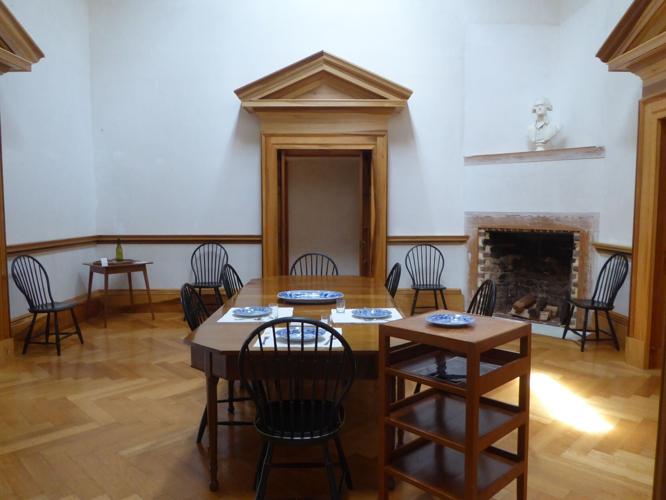 Jefferson designed the central dining room as a perfect cube. 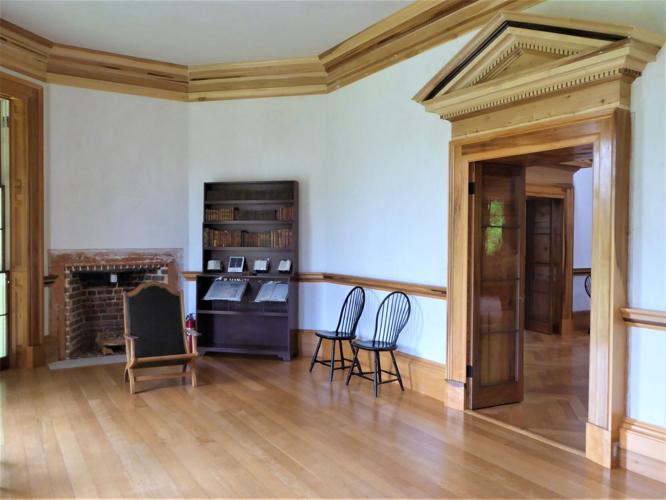 Jefferson maintained a 1,000-book library, many of which were kept in the parlor. Many books were pocket-size that he could take along during his travels. 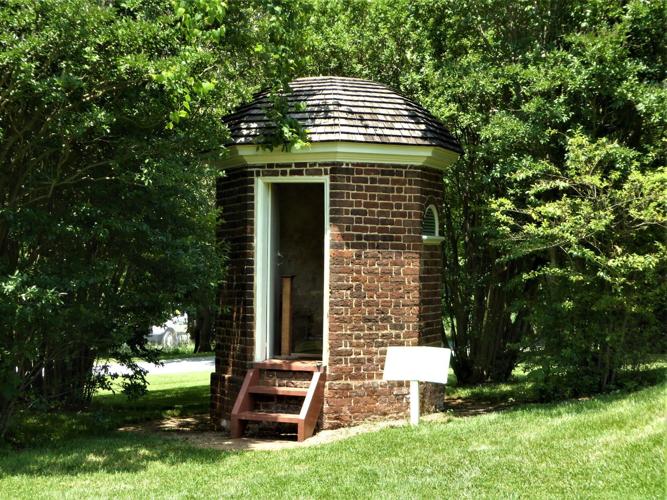 One of two octagon-shaped outdoor privies at Poplar Forest. 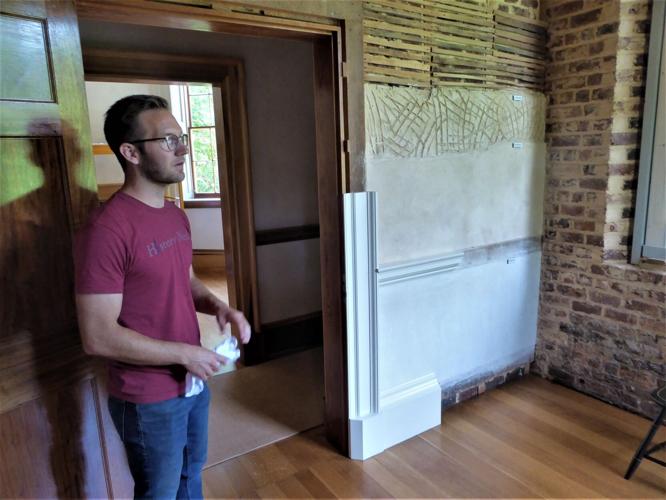 Poplar Forest craftsman Austin Englund describes construction of an interior wall that will remain unfinished to illustrate the restoration process. 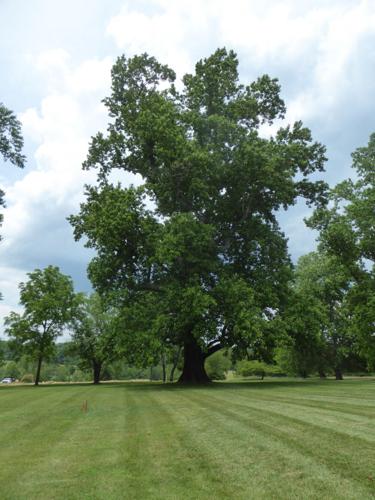 A giant tulip poplar in front of the villa remains from the time of Jefferson's residence.

Poplar Forest’s basement, south portico and service wing are visible only from the back side.

A poster illustrates the floor plan of Jefferson's Poplar Forest.

A kitchen with an expansive fireplace is in the home’s service wing.

Jefferson designed the central dining room as a perfect cube.

Jefferson maintained a 1,000-book library, many of which were kept in the parlor. Many books were pocket-size that he could take along during his travels.

One of two octagon-shaped outdoor privies at Poplar Forest.

Poplar Forest craftsman Austin Englund describes construction of an interior wall that will remain unfinished to illustrate the restoration process.

A giant tulip poplar in front of the villa remains from the time of Jefferson's residence.

“When finished, it will be the best dwelling house in the State, except that of Monticello; perhaps preferable to that, as more proportioned to the faculties of a private citizen.”

LYNCHBURG, Va. – Nearly a decade ago during a stay in Roanoke, Virginia, we learned of a villa designed, built and enjoyed by Thomas Jefferson during and following his presidency. We had previously visited Monticello, Jefferson’s primary home near Charlottesville, but had no idea he had designed and constructed a villa to occasionally escape Monticello’s commotion and seemingly endless stream of visitors. The following day we headed an hour east from Roanoke to visit Jefferson’s retreat, Poplar Forest.

Considerable work on the home was taking place at the time of our visit. While the exterior appeared in good condition, the interior had undergone extensive alteration by subsequent owners following Jefferson’s death and was in an intermediate stage of restoration. We found Poplar Forest and its history quite interesting and after returning home to South Georgia talked of someday returning to the historic villa. It wasn’t until this past June during a road trip along the Blue Ridge Parkway that we were able to connect again with Jefferson’s retreat.

The remote 4,819-acre plantation on which Jefferson would build his villa had been inherited by wife, Martha, at her father’s death in 1773. At the time the plantation included 11 slaves and had been named for the numerous poplar trees in the surrounding forest.

Construction on the one-story villa was set in motion in 1805, during the beginning of Jefferson’s second presidential term when he dispatched a Monticello employee to Poplar Forest to begin making bricks. At the time, Jefferson had been a widower for more than two decades. Actual construction atop a small hill commenced the following year with brick walls and roof framing completed in 1807. Windows, floors, columns and privies were finished the following year, and Jefferson began using the home in 1809, prior to its completion.

The villa and surrounding landscape, each designed by Jefferson, a self-taught architect who oversaw Poplar Forest’s construction, evidence the owner’s preference for symmetry, octagons and designs experienced during his European travels. The home is an equal-sided octagon with a main floor composed of four elongated octagonal rooms surrounding a 20-foot cube housing the dining room accentuated with a large skylight. The villa is entered from the north portico and through a passage leading to the dining room. The south-facing parlor/library is enhanced with sunlight from two expansive floor-to-ceiling windows on each side of an exterior glass door. Rooms on the east and west sides of the home served as bedrooms (Jefferson’s on the west), each split in the middle with an alcove bed.

A lower level of the villa, visible only from the back (south) is similar in layout to the main floor and was utilized for storage and as living space for enslaved and free workmen. A service wing jutting from the home’s east side housed a kitchen, laundry, smokehouse and a room likely used for storage. A unique octagonal brick privy stands an appropriate distance from each side of the home, requiring that occupants undertake an uncomfortable walk on cold nights. Jefferson had his own private privy in the villa’s lower level.

Following two terms as president, Jefferson would make the two- to three-day trip to Poplar Forest three or four times per year for stays lasting up to two months. The plantation was then home to nearly 100 enslaved people and served as a source of Jefferson’s income, primarily from raising tobacco. His final visit was in 1823 when he assisted grandson Francis Eppes and Eppes’ family move into the villa. Jefferson, who would die three years later, anticipated Eppes would raise his family at Poplar Forest. However, two years after Jefferson’s death the grandson sold the plantation and moved to Florida. The house would subsequently suffer a major fire in 1845, pass through several owners, and go through extensive alterations before being acquired in 1983 by the Corporation for Jefferson’s Poplar Forest, a nonprofit organization with a goal of restoring and relating the story of Thomas Jefferson’s personal retreat.

We found Poplar Forest considerably more intimate than Jefferson’s Monticello. The villa at Poplar Forest is considerably smaller and experiences fewer visitors (about a tenth the number of visitors as Monticello) resulting in a more personal experience. During our most recent visit we were fortunate to tour with Mary Massie, the facility’s director of programs and education, who has worked at Poplar Forest for more than a dozen years. Docent-guided public tours of the first floor last from 45 minutes to an hour and are offered four times daily from mid-March through the end of December as docents are available. Other elements of Poplar Forest, including extensive exhibits in the villa’s lower level and a dwelling site for enslaved people, are accessible for self-guided tours. Visitors may explore the property at their own pace using a cell phone audio tour. Weekend winter tours are offered from mid-January to mid-March.

Our return to Poplar Forest was as rewarding as we had anticipated. During the initial visit we explored Jefferson’s villa in the wide-eyed wonderment of children. Following our return home from that trip we talked about what a delightful surprise it would have been to have strolled into the parlor to discover a living Thomas Jefferson. In our imaginings Jefferson would glance up from the pages of a book with a welcoming smile and ask if we would like a glass of wine. The remainder of the afternoon would be spent with the former president and author of the Declaration of Independence captivating us with his experiences during the creation of our country. This didn’t happen during our return visit, of course, but while strolling through the villa we seemed to sense Jefferson’s spirit in this special place he loved so dearly.

The organization’s excellent website www.poplarforest.org should answer most questions and includes a listing of special events. A link offers a virtual tour of the villa with Mary Massie. An fascinating villa tour via a drone is available on YouTube.

David and Kay Scott are authors of “Complete Guide to the National Park Lodges.” They live in Valdosta, Ga.