India Staller, a phlebotomist with the American Red Cross, draws blood from Mike Garver, of Johnstown, in January 2021, at the Richland Township Fire Department hall near Johnstown. 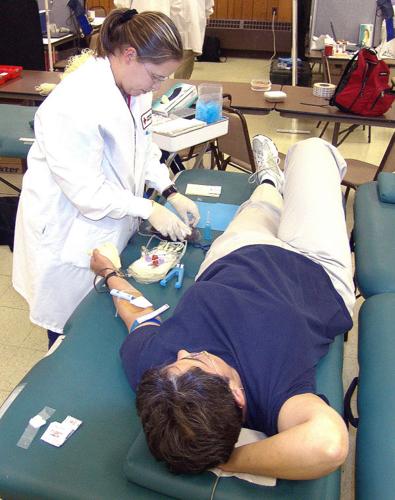 Kristie Bopp, a licensed practical nurse from Johnstown, draws blood from Helaine Ferringer of Hermitage in 2014 during the American Red Cross’ annual blood drive in Sharon.

India Staller, a phlebotomist with the American Red Cross, draws blood from Mike Garver, of Johnstown, in January 2021, at the Richland Township Fire Department hall near Johnstown.

Kristie Bopp, a licensed practical nurse from Johnstown, draws blood from Helaine Ferringer of Hermitage in 2014 during the American Red Cross’ annual blood drive in Sharon.

With a national blood shortage looming, a coalition of hospitals and health care systems throughout western Pennsylvania are trying to raise awareness and drum up potential donors to keep the blood flowing.

Most hospitals’ in-house blood banks maintain a four-day supply of blood. However, current supplies of type-O blood — the most transfused blood type — as well as platelets, which must be used within seven days or collection, have dipped to below half that amount at many hospitals, according to a press release.

Among those hospitals raising awareness is Allegheny Health Network Grove City, which President Dr. David Tupponce said benefits from being part of a larger network that gives the Pine Township hospital access to more resources than traditional rural hospitals.

“We can flex our supply up and down as needed, but we’re certainly not immune to what’s happening nationally and locally,” Tupponce said.

In normal years, Tupponce said hospitals sometimes have experienced blood shortages at the local level due to lulls in blood donations. While certain seasons may see an uptick in donors as drives with incentives are held, other seasons such as the holidays may see less people donating.

However, the COVID-19 pandemic added to the issue, as people were quarantined and not donating blood, while blood drives and other gatherings were restricted or sometimes canceled outright.

But things haven’t eased since the pandemic restrictions were lifted. To the contrary, Tupponce said hospitals are being pinched from both sides.

Fewer people are donating blood since they’re on vacation or otherwise away from their local hospitals. At the same time, more people are engaging in summer activities that can result in injuries requiring blood transfusions, Tupponce said.

Many of these injuries are treated at AHN Grove City, which is a Level 4 trauma center.

“We have people coming in from automobile accidents or ATV accidents, or they were riding a horse or chopping wood — we see a lot of those kinds of injuries,” Tupponce said.

At AHN Grove City, there are usually about 40 units of blood being stored on-site at any given time, of which a third is type-O blood — as the universal donor type, it can be given to those with every blood type.

Tupponce said the shortage has not led to constrained care at AHN Grove City, and the medical field in general has taken steps over the years to reduce the amount of blood used.

When he was undergoing his medical training more than 15 years ago, Tupponce said it was commonplace to use two units of blood when transfusing a patient, with each unit containing about 350 milliliters of blood, about 12 ounces.

Nowadays, even if a patient meets the requirements for a blood transfusion, medical professionals only use one unit of blood, then check the patient’s blood levels to see if a second is required.

Aside from conserving blood supplies, this practice also helps to reduce the chances of increased mortality for patients.

In some cases, a patient’s system can get used to lower levels of blood, so an over-transfusion of blood can overload the patient’s heart, among other issues. Even maximizing a patient’s blood supply prior to an operation too aggressively could have fatal consequences.

“It’s been a big shift in medicine, because now we tend to use a lot less blood and be a little more respectful of the risks of blood transfusion,” he said.

However, local donors will have an opportunity to help alleviate the blood shortage at a blood drive coming next week.

At AHN Grove City, hospital officials have held four blood drives per year, partnering since 2008 with Central Blood Bank, now the nonprofit blood services provider Vitalant. Before that, the blood drives were held with the Red Cross for several years.

There have been an average of 30 donors at each blood drive, including several hospital employees who are “loyal, long-time donors” according to hospital information.

One unique aspect of AHN Grove City’s blood drives is employee involvement as both donors and recruiters. A team of in-house department recruiters is responsible for asking and singing up team members.

Many “non-donors” have said they never donated before simply because they were never asked, the information states.

According to Vitalant, the number of new donors is down by 12 percent year over year, with 92,000 fewer donors annually compared to pre-pandemic levels. Just 3% of the population donates regularly and a sharp, unexplainable decrease in young donors has hurt blood supplies.

Introducing new donors is especially important since every unit of blood donated doesn’t just save a life — it can save up to three lives.

Aside from blood for surgeries and injuries, Tupponce said about “90 percent” of transfused blood is used by the oncology service, since chemotherapy can lower a patient’s blood count.

“It’s a great feeling donating something that is replenished by your body within a few weeks, and potentially saving up to three lives,” Tupponce said.