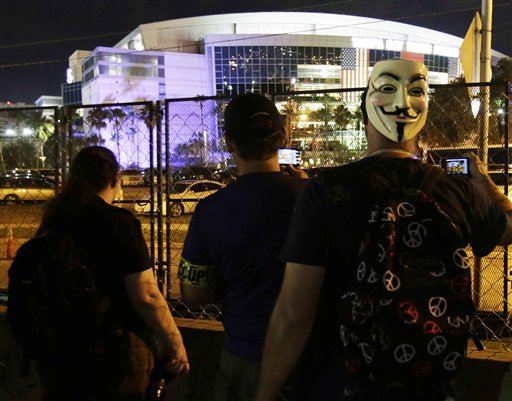 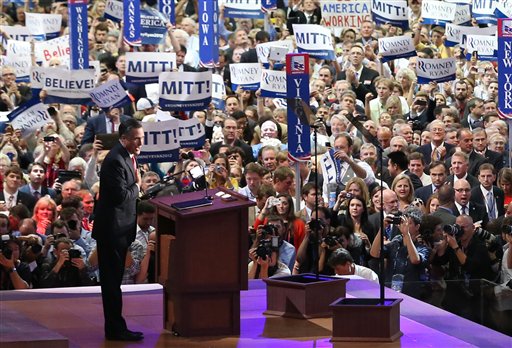 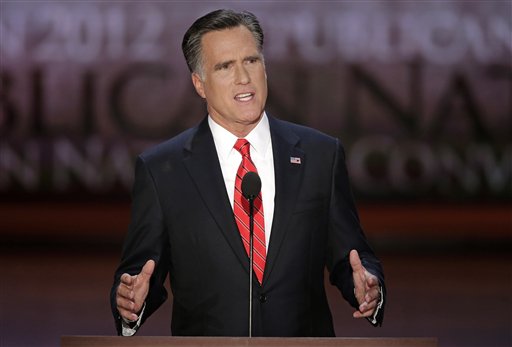 "Now is the time to restore the promise of America," Romney said in prime-time speech to a nation struggling with 8.3 percent unemployment and the slowest economic recovery in decades.

Often viewed as a distant politician, Romney made a press-the-flesh entrance into the hall, walking slowly down one of the convention hall aisles and shaking hands with dozens of delegates. The hall erupted in cheers when he reached the stage and waved to his cheering, chanting supporters before beginning to speak.

"I accept your nomination for president," he said, to more cheers.

He muted his criticism President Barack Obama, his quarry in a close and uncertain race for the White House.

"I wish President Obama had succeeded because I want America to succeed," he said. "But his promises gave way to disappointment and division."

Clint Eastwood, legendary Hollywood tough guy, put it more plainly. "When somebody does not do the job, you've got to let 'em go," he said to the cheers of thousands in the packed convention hall.

He spoke moments before Romney walked on stage.

"This isn't something we have to accept ," he said, appealing to millions of voters who say they are disappointed in the president yet haven't yet decided to cast their votes for his Republican challenger.

Romney's remarks came on a night when other speakers filled out a week-long portrait of the GOP nominee as a man of family and faith, savior of the 2002 Winter Olympics, savvy and successful in business, yet careful with a buck. A portion of the convention stage was rebuilt overnight so he would appear surrounded by delegates rather than speaking from a distance, an attempt to soften his image as a sometimes-stiff and distant candidate.

"He shoveled snow and raked leaves for the elderly. He took down tables and swept floors at church dinners," said Grant Bennett, describing Romney's volunteer work as an unpaid lay clergy leader in the Mormon church.

Following him to the podium, Ted and Pat Oparowski tenderly recalled how Romney befriended their 14-year-old son David as he was dying of cancer. "We will be ever grateful to Mitt for his love and concern," she said simply.

Beyond the heartfelt personal testimonials and political hoopla, the evening marked one of a very few opportunities any presidential challenger is granted to appeal to millions of voters in a single night.

The two-month campaign to come includes other big moments — principally a series of one-on-one debates with Democrat Obama — in a race for the White House that has been close for months. In excess of $500 million has been spent on campaign television commercials so far, almost all of it in the battleground states of Florida, North Carolina, Virginia, New Hampshire, Ohio, Iowa, Colorado and Nevada.

Romney holds a fundraising advantage over Obama, and his high command hopes to expand the electoral map soon if post-convention polls in Pennsylvania, Michigan, Wisconsin and perhaps elsewhere indicate it's worth the investment.

Shouts of "USA, USA" echoed in the convention hall as several Olympic medal winners came on stage, a reminder of Romney stepping in to help rescue the faltering 2002 Olympic Games in Salt Lake City.

In an evening that blended the political and the personal, delegates saw a video in which his sons poked fun at him. "I can't explain love," Romney said.

As for Obama, Romney said, "Many Americans have given up on this president, but they haven't ever thought about giving up. Not on themselves, Not on each other. And not on America."

The economy is issue No. 1 in the race for the White House, and Romney presented his credentials as the man better equipped than the president to help create jobs. Speaker after speaker testified to the help their received from Bain Capital, the private equity firm that he created — and that Democrats argue often took over companies, loaded them down with debt and then walked away with huge fees as bankruptcy approached.

"When I told him about Staples, he really got excited at the idea of saving a few cents on paper clips," businessman Tom Stemberg said of the  office supply store chain he founded with backing from Bain.

There was no shortage of Obama-bashing, though.

Former House Speaker Newt Gingrich, sharing the stage with his wife, Callista, said Obama was a president in the Jimmy Carter mold. Both "took our nation down a path that in four years weakened America's confidence in itself and our hope for a better future," he said.

Romney's aides did not say whether he would offer any new information on what has so far been a short-on-details pledge to reduce federal deficits and create 12 million jobs in a country where unemployment stands at 8.3 percent.

Romney would have to nearly double the current, anemic pace of job growth to achieve 12 million jobs over four years. That's conceivable in a healthy economy. Moody's Analytics, a financial research operation, expects nearly that many jobs to return in four years no matter who occupies the White House, absent further economic setbacks.

Romney's steps for achieving the employment growth include deficit cuts that he has not spelled out and a march toward energy independence that past presidents have promised but never delivered.

He has called for extension of tax cuts due to expire at all income levels at the end of the year, and an additional 20 percent across the board cut in rates. But he has yet to sketch which tax breaks he will eliminate or cut to prevent deficits from rising.

Nor has he been forthcoming about where to make the trillions in spending cuts needed to redeem his pledge of major deficit reduction, or about his promise to rein in Medicare or other government benefit programs before they go broke.

Ryan, the chairman of the House Budget Committee, has called for remaking Medicare into a program in which the government would send seniors checks to be used to purchase health care insurance.

Under the current approach, beneficiaries pay premiums to the government, which then pays a part of all of their medical bills, and Democrats say the GOP alternative would expose seniors to ever-rising out-of-pocket costs.

Obama's surrogates missed no opportunity to criticize Romney, the convention proceedings or Ryan's own acceptance speech.

"He lied about Medicare. He lied about the Recovery Act," Obama's campaign manager, Jim Messina, emailed Democratic donors in a plea for cash.

"He lied about the deficit and debt. He even dishonestly attacked Barack Obama for the closing of a GM plant in his hometown of Janesville, Wisconsin — a plant that closed in December 2008 under George W. Bush."

The evening sealed a triumph more than five years in the making for Romney. He ran unsuccessfully for the nomination in 2008 after a single term as a moderate Republican governor of a liberal Democratic state.

This year, as then, he was assailed as a convert to conservatism, and a questionable one at that, as Gingrich, former Pennsylvania Sen. Rick Santorum and other rivals battled him for the nomination. With a superior organization and an outside group that spent millions criticizing his foes, Romney eventually emerged as the nominee in early spring.

After years of avoiding direct mention of his religion, Mitt Romney will open up about his M…