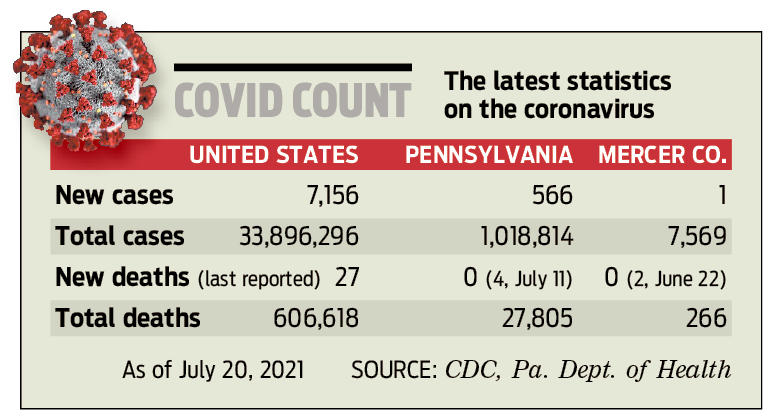 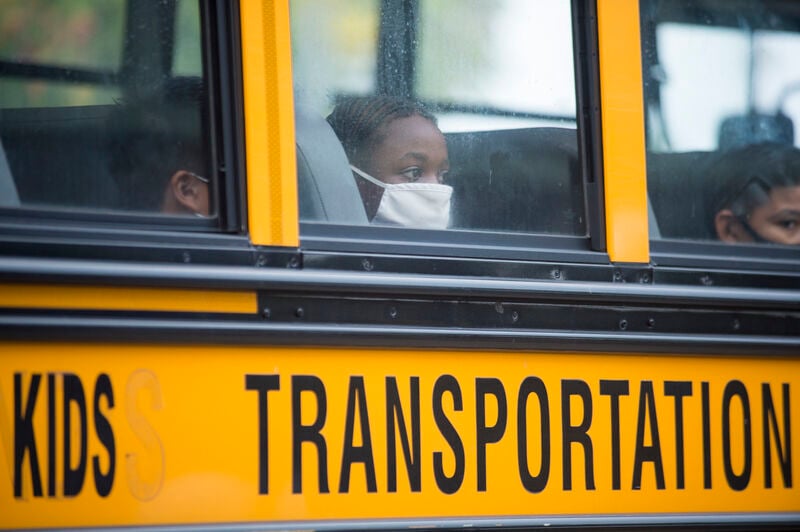 FILE - In this Oct. 12, 2020, file photo, students arrive by bus at Foundation Preparatory School for their return to school during the coronavirus in New Orleans. With COVID-19 cases soaring nationwide, school districts across the U.S. are yet again confronting the realities of a polarized country and the lingering pandemic as they navigate mask requirements, vaccine rules and social distancing requirements for the fast-approaching new school year. (Chris Granger/The Times-Picayune/The New Orleans Advocate via AP, File) 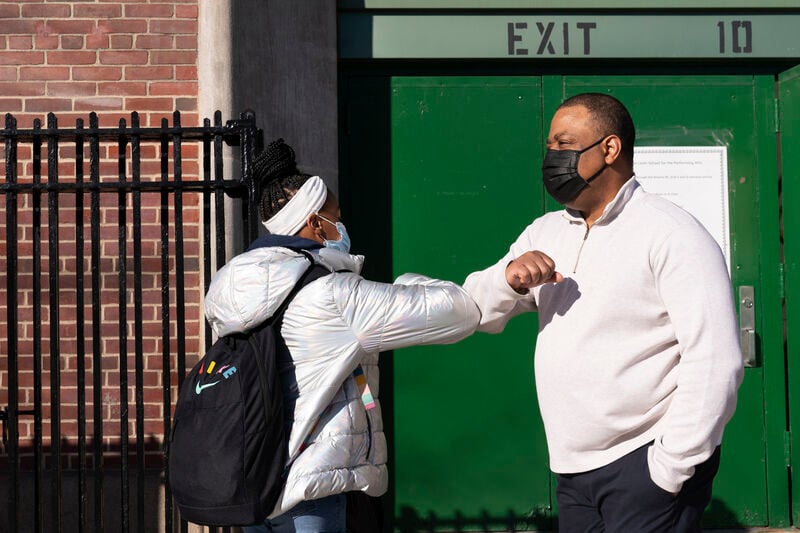 FILE - In this Feb. 25, 2021 file photo, Linsey Johnson, right, a dean at Meyer Levin Middle School, greets a student in New York. With COVID-19 cases soaring nationwide, school districts across the U.S. are yet again confronting the realities of a polarized country and the lingering pandemic as they navigate mask requirements, vaccine rules and social distancing requirements for the fast-approaching new school year. (AP Photo/Mark Lennihan, File) 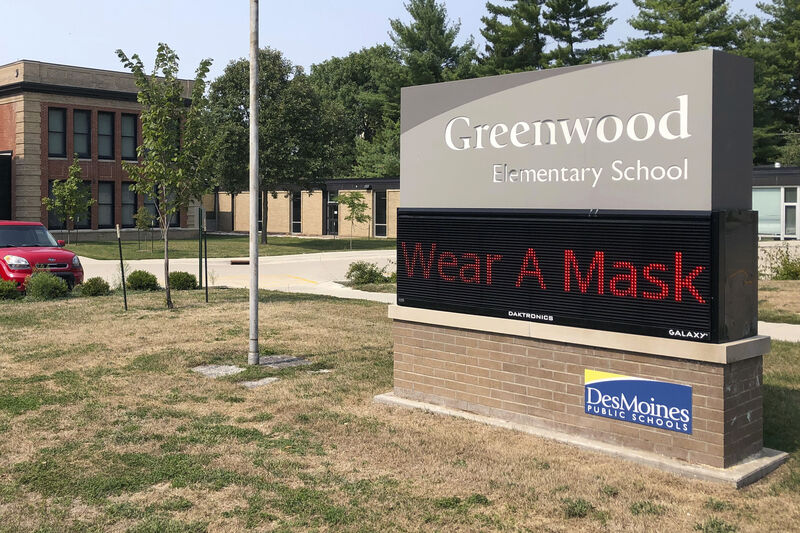 FILE - In this Sept. 17, 2020 file photo, a sign outside of Greenwood Elementary School promotes mask-wearing in Des Moines, Iowa. With COVID-19 cases soaring nationwide, school districts across the U.S. are yet again confronting the realities of a polarized country and the lingering pandemic as they navigate mask requirements, vaccine rules and social distancing requirements for the fast-approaching new school year. (AP Photo/Scott McFetridge, File) 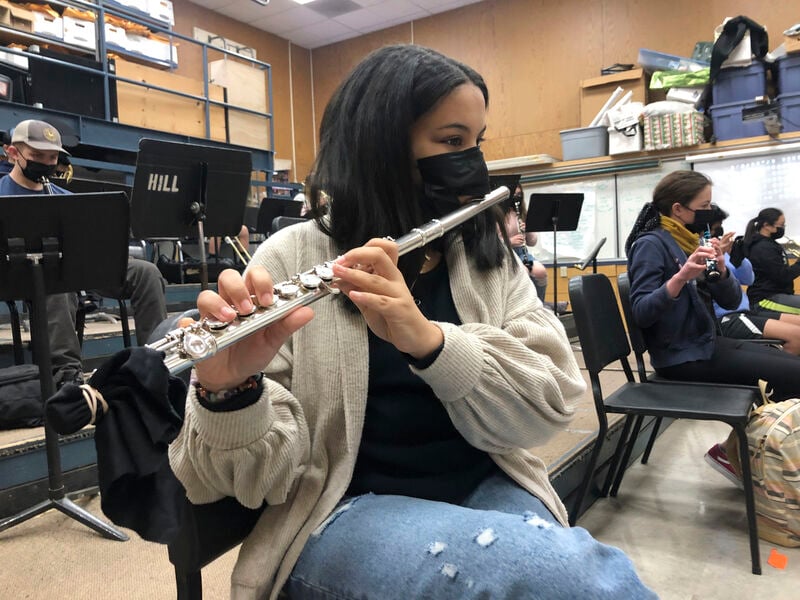 FILE — In this March 2, 2021 file photo, a student plays the flute while wearing a protective face mask during a music class at the Sinaloa Middle School in Novato, Calif. With COVID-19 cases soaring nationwide, school districts across the U.S. are yet again confronting the realities of a polarized country and the lingering pandemic as they navigate mask requirements, vaccine rules and social distancing requirements for the fast-approaching new school year. (AP Photo/Haven Daily)

With COVID-19 cases soaring nationwide, school districts across the U.S. are yet again confronting the realities of a polarized country and the lingering pandemic as they navigate mask requirements, vaccine rules and social distancing requirements for the fast-approaching new school year.

Students in Wichita, Kan., public schools can ditch the masks when classes begin. Detroit public schools will probably require them unless everyone in a room is vaccinated. In Pittsburgh, masks will likely be required regardless of vaccination status. And in some states, schools cannot mandate face coverings under any circumstances.

The spread of the delta variant and deep political divisions over the outbreak have complicated decisions in districts from coast to coast. In some conservative states, lawmakers have banned districts from requiring masks despite outcry from medical professionals. Schools are weighing a variety of plans to manage junior high and middle school classrooms filled with both vaccinated and unvaccinated students.

“I’m so frustrated that it’s become a political issue because it shouldn’t be. It’s science,” said Mary Tuttle, who operates an Indianapolis in-home day care center and has watched the debate in her state over vaccines and masks.

The Indianapolis district has not yet announced its mask policy, but she hopes they will be required. She worries that the delta variant could force a return to in-home learning, which caused her 10-year-old daughter to become depressed and anxious last year.

“Emotionally, she really needed to be in school,” Tuttle said, adding that her daughter will be vaccinated as soon as the shot is approved for her age group.

The vaccine has not been approved for children under 12. If it shown to be safe and effective for younger ages, vaccine manufacturers may seek emergency authorization sometime this fall or winter.

Adding to the concerns is a rise in cases overall — sharply in some states, including Arkansas, which won’t let schools require masks. Public health researchers on Tuesday called Arkansas’ rapidly climbing infections and hospitalizations a “raging forest fire,” and the state’s top health official warned of significant future outbreaks in schools.

Arkansas leads the country in new cases per capita, according to figures compiled by Johns Hopkins University researchers, and it has one of the lowest vaccination rates in the country, with only 35% of the population fully vaccinated.

Weekly tallies by the American Academy of Pediatrics based on state reports show that COVID-19 cases in kids increased nationally in July after a couple of months of declines. The most recent data shows a 1% increase from July 1 to July 15, representing 43,000 additional cases.

American Federation of Teachers President Randi Weingarten said the fact that some states refuse to allow mask requirements “is just plain wrong.” She said the organization has embraced recommendations from the Centers for Disease Control and Prevention, including masking for those who are not vaccinated and other mitigation steps such as 3-feet physical distancing, ventilation and testing.

But school officials say masking decisions have been complicated by conflicting advice from public health officials.

The American Academy of Pediatrics on Monday recommended universal masking in schools, even for those who are vaccinated against the virus that causes COVID-19. The CDC earlier this month recommended mask-wearing indoors only for students and staff who are not fully vaccinated.

“It’s frustrating. Parents hear that these are recommendations, and it becomes a delicate dance” because of differing opinions, said Steve Matthews, superintendent of Novi Community Schools, outside Detroit.

That increase in infections tracks with a decline of vaccinations in the United States, from 1.36 million on June 18 to a little more than 500,000 a day over the last few days. On April 13, 3.38 million Americans received vaccinations, according to the U.S. Centers for Disease Control and Prevention.

A few clouds from time to time. Low 62F. Winds light and variable.

A few clouds from time to time. Low around 65F. Winds light and variable.

Partly cloudy in the evening followed by scattered thunderstorms after midnight. Low 69F. Winds light and variable. Chance of rain 40%.