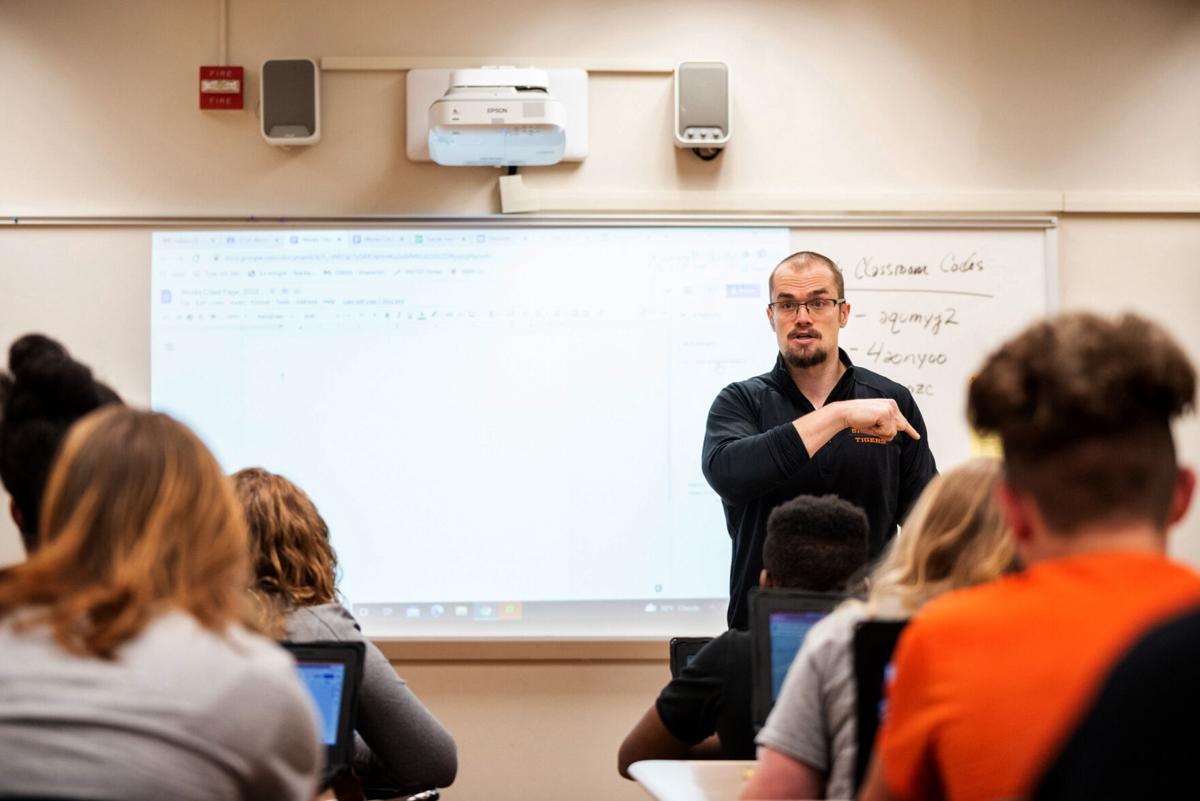 Josiah Everett instructs his seventh-grade English class Friday in Sharon. Sharon City School District had so many teachers missing that the middle high school had to go to remote instruction from Jan. 7 to 10. 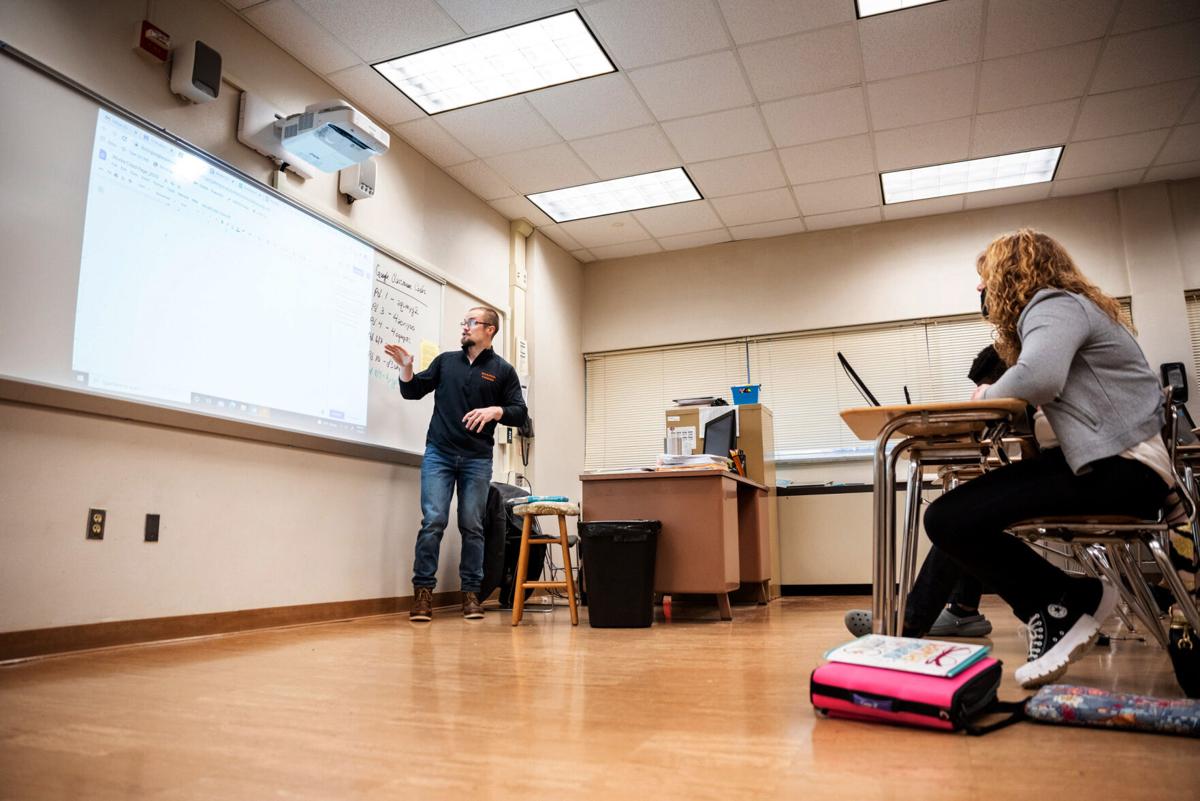 Josiah Everett instructs his seventh-grade English class Friday in Sharon. Sharon City School District had so many teachers missing that the middle high school had to go to remote instruction from Jan. 7 to 10.

When a substitute teacher turns up to cover classes at Farrell Area School district, Superintendent Rev. Dr. Lora Adams King wants to make sure they stick around.

“If a sub shows up today, I’m going to say, ‘Can you come the rest of the week or can you come all month?’” Adams-King said. “I’m not even going to give you a chance to go home and get a call from somebody else.”

Because “someone else” will call. With COVID-related illnesses and precautions causing shortages of teachers and substitute teachers, area school districts have had to resort to unusual measures — including a bidding war of sorts — to fill teachers’ desks.

In some districts, the shortage has forced administrators to send their schools to virtual lessons. Sharon City School District had so many teachers missing that the middle high school had to resort to remote instruction from Jan. 7 to 10.

Reynolds High School was forced into remote learning from Tuesday through Friday.

Dr. William Gathers, Sharon’s interim superintendent, said COVID-19 played a large part in why about 10 teachers were out from the middle high school last week. By going virtual, the district had more teachers available because staff members who were exposed to COVID but had no symptoms were able to teach from home.

“We want to be able to provide a quality education,” Gathers said. “We’re all going to have to weather this together, as crazy as it is.”

Erica Argenziano, a Sharon Middle School teacher and president of the Sharon Teachers Association, said the district is having problems finding substitute teachers.

“We just don’t have enough right now,” Argenziano said. “And it’s countywide. The district is just trying to deal with it, and I think they’re doing the best they can.”

Gathers said the district’s ability to attract substitute teachers has gotten better since it raised the daily pay rate.

After Hermitage raised its substitute teacher rate 20% from $100 a day to $120 a day, both Sharon and Farrell school districts followed suit.

Sharon City School Board voted Monday to increase its substitute teacher rate from $100 a day to $130 to $150 a day, with bonuses for working a certain number of days in the district.

“The pool of candidates is not here as it was before – not just in Farrell,” Adams-King said. “In addition, we have some subs that won’t come out because of the pandemic, which shortens supplies where there’s already a major shortage.”

Adams-King said that it really hurts a building in Farrell if five or more teachers are out – and they’ve reached that level this year. If the schools cannot hire a substitute, it costs the district more money to have a regular teacher cover classes using their non-class time.

“We have to pay them per class what their contract says,” Adams-King said. “That goes into their wage, and you have benefits and everything on top of that.”

And taking on a class period during their planning sessions increases stress on teachers — Adams-King said teachers sometimes need to catch their breath too.

For a regular teacher to cover a class that is not theirs, it costs $35 per period in Farrell, Business Manager Shane Wiesen said. That means Farrell would spend more, even at the elevated daily rate, on paying existing staffers to cover classes during their planning periods than it would on an all-day substitute.

“Some subs cover maybe 10 to 12 classes per week due to high absenteeism due to COVID,” Wiesen said. “Everyone is struggling to find subs.”

Sharpsville Area School District is also having trouble hiring substitutes, so it has turned to having current staff fill in, Superintendent John Vannoy said.

Vannoy said teaching vacancies can range from a few teachers at a time to several, creating a “daily challenge” for district staff to continue in-person education.

When a teacher is absent — whether due to COVID, regular illnesses or family issues — Vannoy said temporarily filling the position can involve substitutes, existing full-time teachers, support staff and even administrators stepping into the classroom.

“I would say it’s been ‘the next person up’ jumps in,” Vannoy said. “We’ve had to do some juggling, but the staff have really gone above and beyond.”

Though there is no definite number of absences among staff or students that would trigger a shift to remote learning, Vannoy said if administrators did decide to temporarily close the schools, remote learning would begin the following day to give students and parents time to prepare.

Superintendent Raymond Omer, who oversees both the West Middlesex Area and Reynolds school districts, said those districts took steps in anticipation of possible staff absences due to the pandemic.

But if a teacher is absent, an extra staff member can fill in as a substitute teacher, Omer said.

District officials developed agreements with their collective bargaining groups that extra positions would be filled throughout the pandemic as necessary and not incorporated into the districts’ permanent staff, Omer said.

“I have to give credit to our collective bargaining groups, because they understand there is a need right now,” Omer said.

He said absences among other key staff beyond teachers — such as bus drivers, cafeteria staff or nursing staff — could force a school to close temporarily. This is why it remains important for parents to keep their children who show COVID-19 symptoms at home and contact the district instead of sending their children to school.

“Sending students who are sick to school has never been acceptable, whether it’s a sinus infection, strep throat, or MRSA,” Omer said.