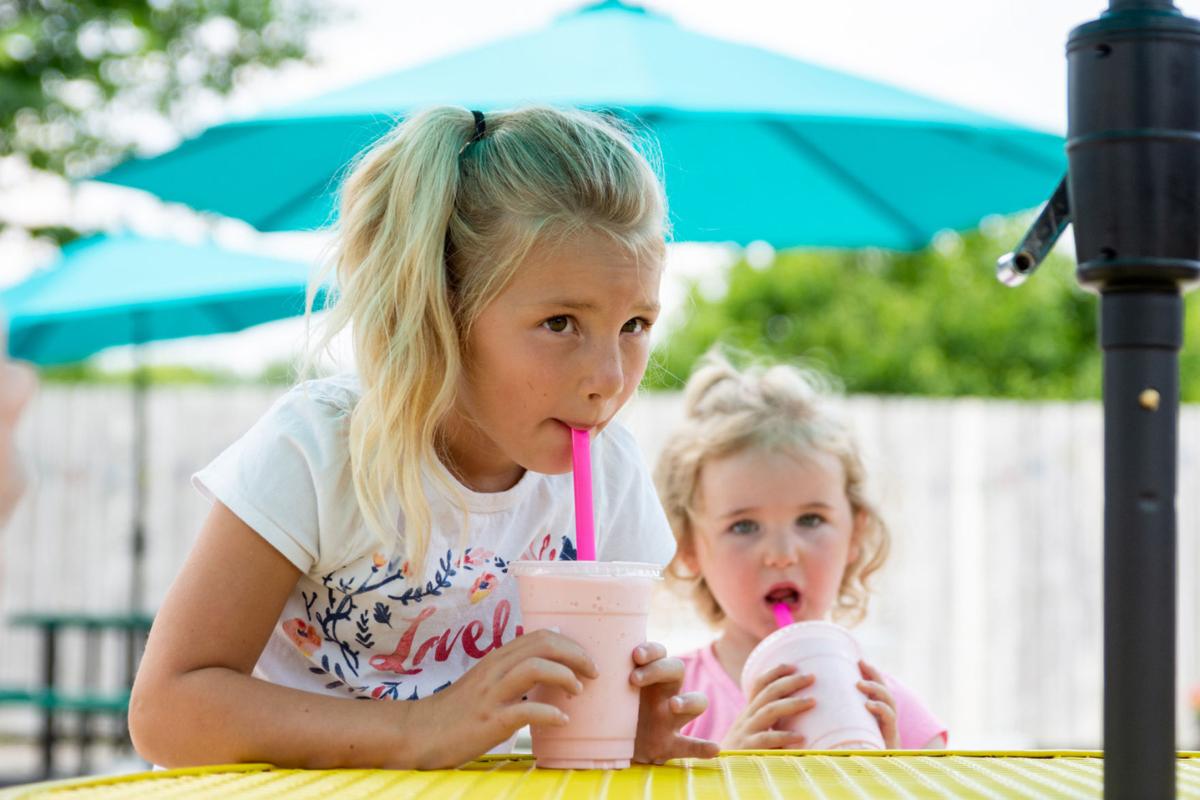 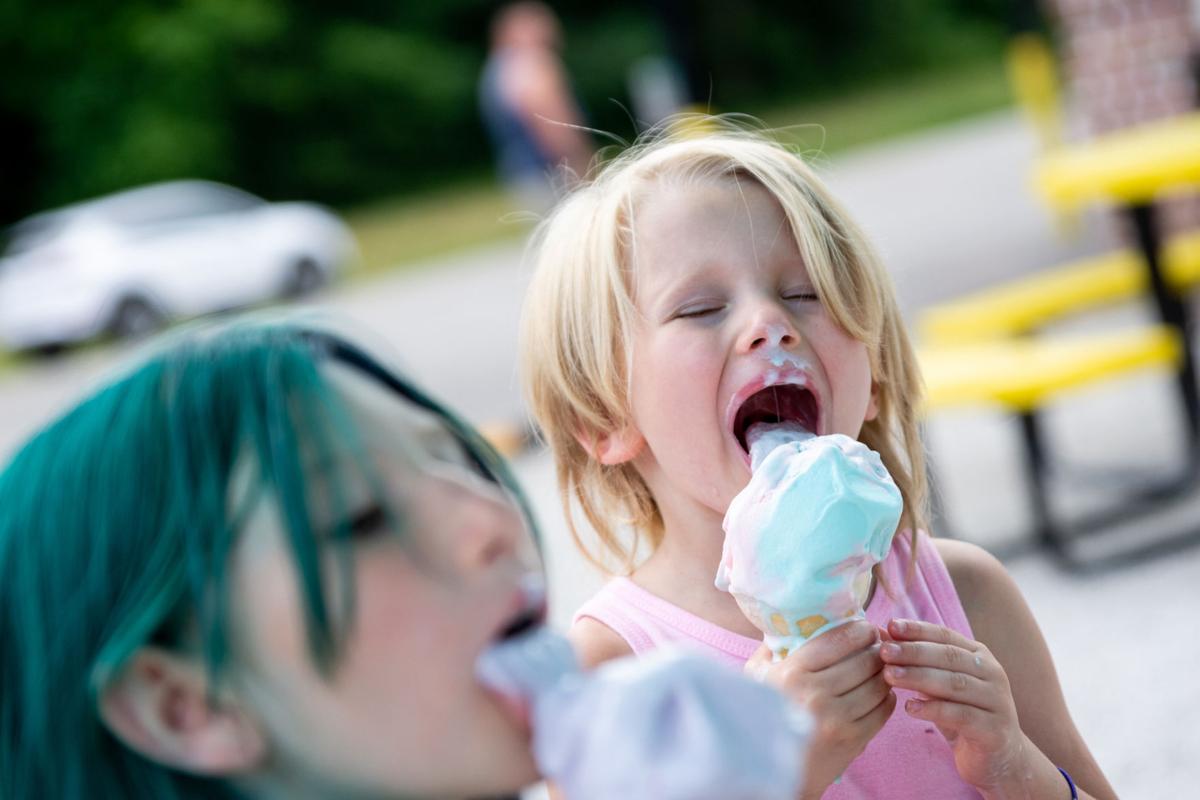 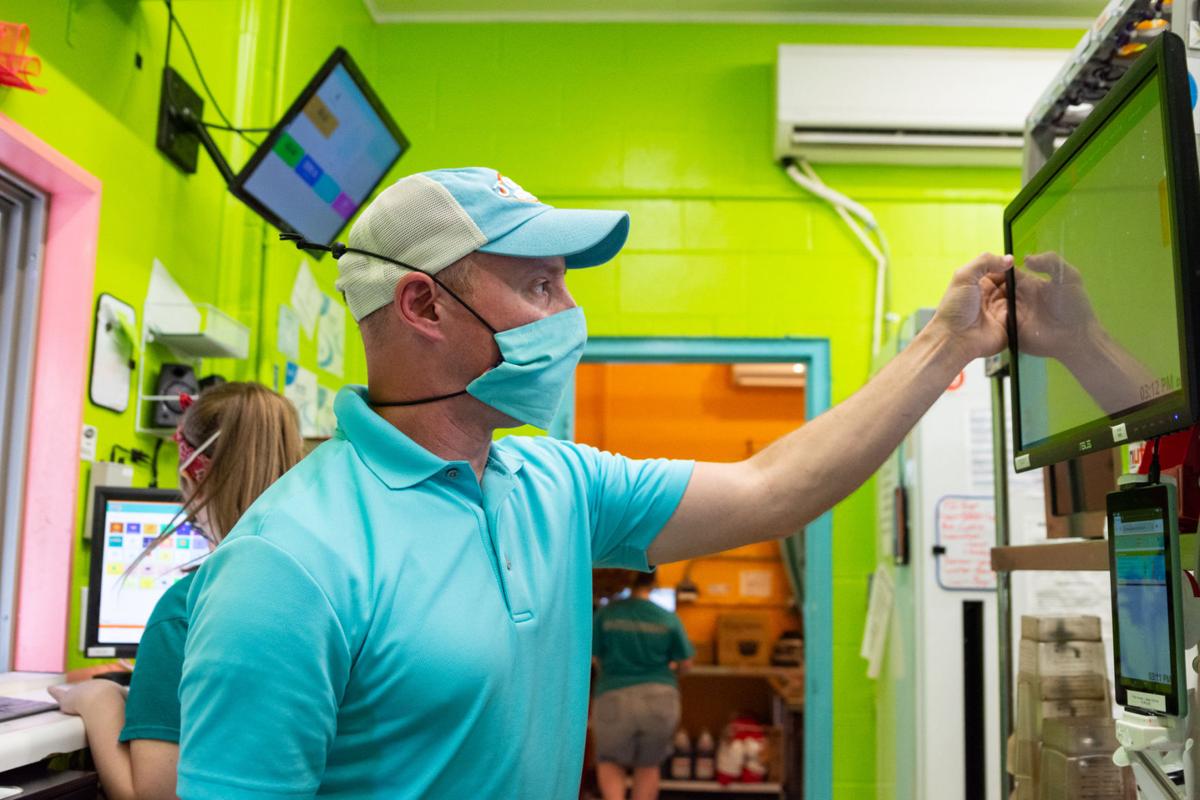 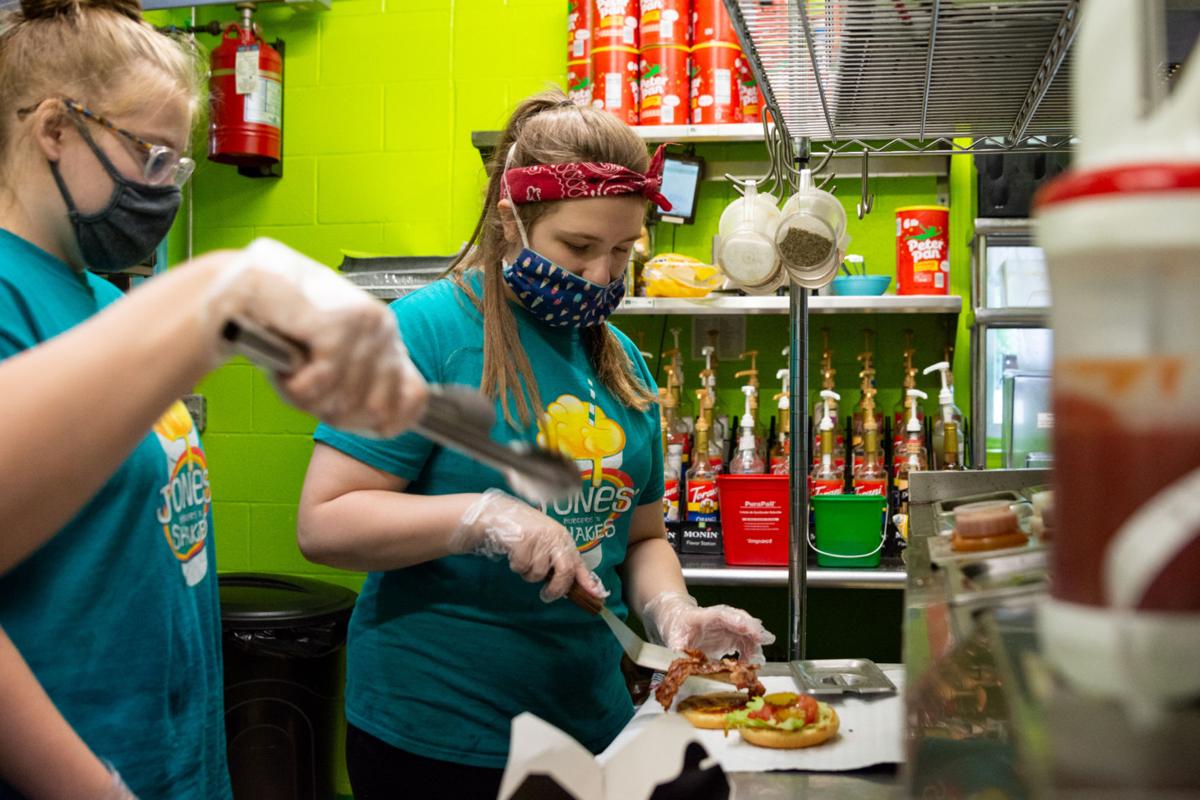 JEFFERSON TOWNSHIP – If you ordered a different milkshake each day from Jones’ Burgers ‘N Shakes, it would take nearly a year to to sample every flavor on the menu.

“We sell happiness here,” he said.

Outside the restaurant at a picnic table that is as colorful as the rest of the business, Miller talked about how the shop has changed since it opened in 2004.

Jones’ stands out on a remote stretch of U.S. Route 62 just west of Mercer, with no other businesses, and few houses around.

“We’re the only restaurant in Jefferson Township,” he said.

While this is Jones’ 17th season selling burgers, fries and cold treats, 2020 marks 10 years since the business reinvented itself by focusing on the milkshakes — about 300 different flavors offered daily.

“A lot of it is inspired by desserts... It’s way more than blending,” said Miller, who lives across the street with his wife, Stacy, and their four kids.

At one table outside the shop, Emily Schlegel of West Middlesex, was enjoying a mint chocolate shake while grandmother Nancy Schlegel, of Sharpsville, had a classic chocolate shake.

“I also like the cereal flavors. Those are my favorite,” Emily said.

Emily and her grandmother were heading home from Mercer when they stopped at Jones’ to celebrate the 16-year-old passing her driver’s license test.

They’ve visited multiple times and enjoy the variety of flavors, even though some of them take diners out of their comfort zone.

The shop offers milkshake flavors ranging from the typical — chocolate, vanilla and strawberry — to the unusual, with several based on cereals, to the extreme, including buffalo chicken, dill pickle, chocolate bacon, French toast, avocado, buttered popcorn, and jalapeño pepper.

Miller said he gets some of his ideas from dessert menus at restaurants, and he studies food science publications.

He’s also been using a cold smoker to smoke ingredients like caramel and nuts, and there are lactose-free options.

He favors the avocado shake, which incorporates avocado, lime and marshmallow, and he was happy to hear that Emily chose Jones’ to celebrate a special milestone in her life.

Jones’ is very much a family business. His wife and their children help out, and his brothers helped him get things started soon after Miller and his family moved to the township in 2003.

The property previously housed a used car lot, and Miller, a Portersville native who also works in the healthcare software field, bought the land and cleaned it up.

It is named after the Miller family’s cat, Jones, who passed away a few weeks after the restaurant opened in 2004.

Miller didn’t initially intend to open a restaurant, but he’s glad that he took that path.

“We get to meet our neighbors,” he said, noting that there isn’t much else on that stretch of Route 62.

There are many regular customers, and a lot of them stop by on their way to or from the Mercer area.

Miller has added more hot foods to the menu so that families can enjoy a whole meal – from appetizers to desserts — in one spot.

Orders can be placed in person or in advance on the Jones’ website.

Jones’ has outdoor seating only, which means Miller hasn’t had to make too many changes to operations in response to the COVID-19 pandemic.

The shop also has other methods to facilitate social distancing. Customers who order at the window can wait outside as staff calls out their orders over a public address system, or they can wait in their vehicles and listen for the announcement on their radio by a short-range transmission.

Because there are so many milkshake choices, Jones’ provides a wheel, so customers can spin to help narrow down the choice.

The most popular shake right now is the Strawberry Pretzel Salad, Miller said.

Each shake is put together differently. For example, a shake with pretzels needs to blend longer.

With each order, a recipe — with each ingredient and the amount to be used — pops up on a screen, simplifying the process for employees.

“I love the creativity that we get to have here,” Miller said.

Learning how to properly blend a milkshake is the last thing that new Jones’ employees learn, especially since timing is very important to ensure the beverage is fresh and cold, Miller said.

The restaurant recently started a loyalty program, which can help customers track the different shakes they’ve tried. Jones’ is still working on the “benefits” part of the “Official Shake Snob” card.

“Some people try to work through the menu,” he said.

Employee Sarah Watson said she enjoys talking to the customers, and she likes being able to serve up a variety of items.

Jones’ is a unique environment, and she has fun working there. Her favorite milkshake is cookie butter.

Jones’ is typically open Memorial Day through Labor Day. Miller opened a bit sooner this year and said Jones’ is already on track to have its best year ever in terms of sales.

He’s looking for potential franchisees who may be interested in opening more locations, specifically in Cranberry Township, and the Niles/Boardman area.

Jones’ sponsors the Mercer girls’ softball team, and its products have been sold at local fundraisers and events.

Customers lined up Tuesday even as a storm rolled in, rushing to place their orders before the rain hit.

Brandon Chambers of Farrell stopped by with his son Peyton, 9, and Peyton’s friend LaSavion Benham, 8.

Chambers was enjoying a strawberry milkshake while the trio waited for a burger, fries, pizza rolls and grilled cheese.

The two boys, drinking green apple soda, said they have fun stopping at places like Jones’ in the summer.

Hector J., 95, formerly of Wheatland. Service: Due to the COVID-19 pandemic, a private funeral service will be held at thye convenience of the family with Rev. Matthew J. Ruyechan, pastor of Our Lady of Fatima Parish, presiding. Burial: St. Ann Cemetery, Hermitage. Arrangemebnts by the A.E. …

Glenn, 79, of Pymatuning Township. Service: Due to COVID-19, the family plans to have a celebration of life service at a later date. Friends may sign guestbook at www.flynnfuneralhome.com. Burial: America's Cemetery, Hermitage. Arrangements by JOHN FLYNN FUNERAL HOME and CREMATORY Inc., 2630…