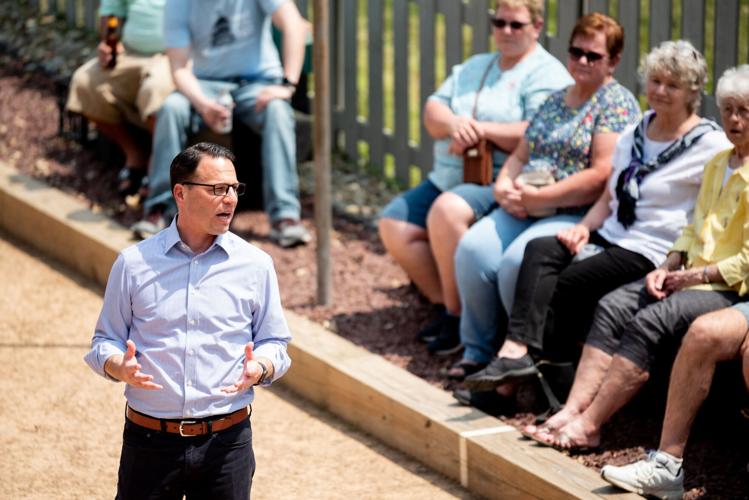 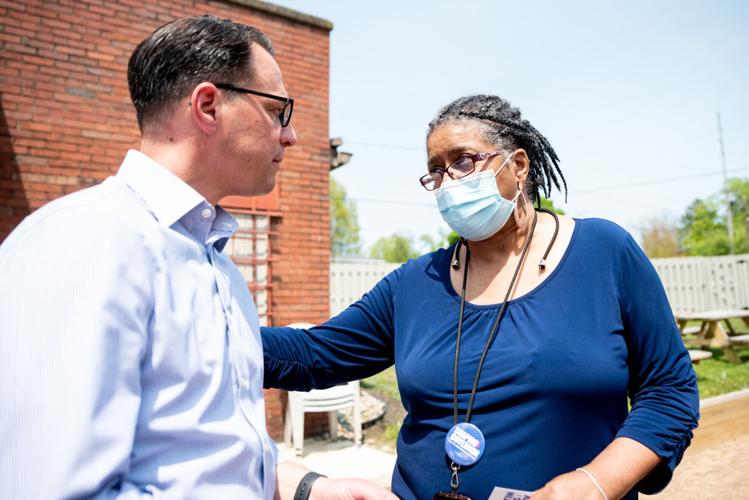 Monica Williams, of Farrell, talks with Pennsylvania Attorney General and Democratic candidate for Governor Josh Shapiro during a campaign stop Thursday at the New Deal Club in Farrell. 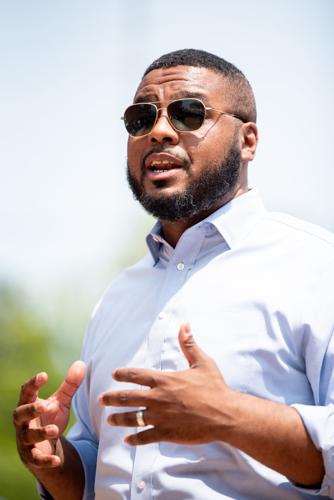 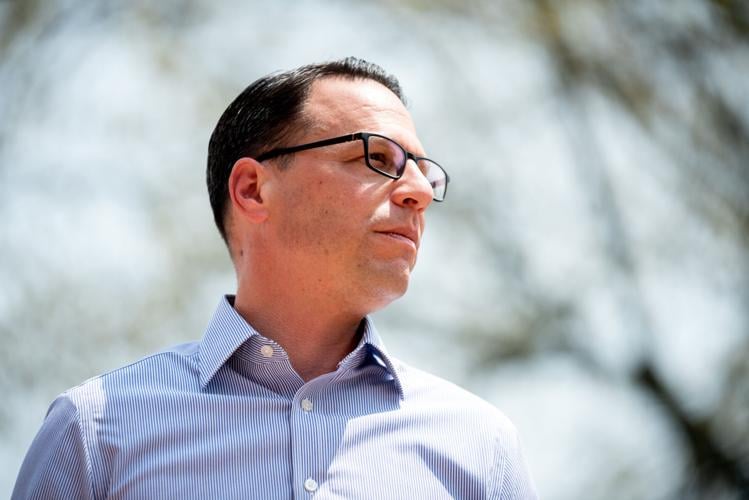 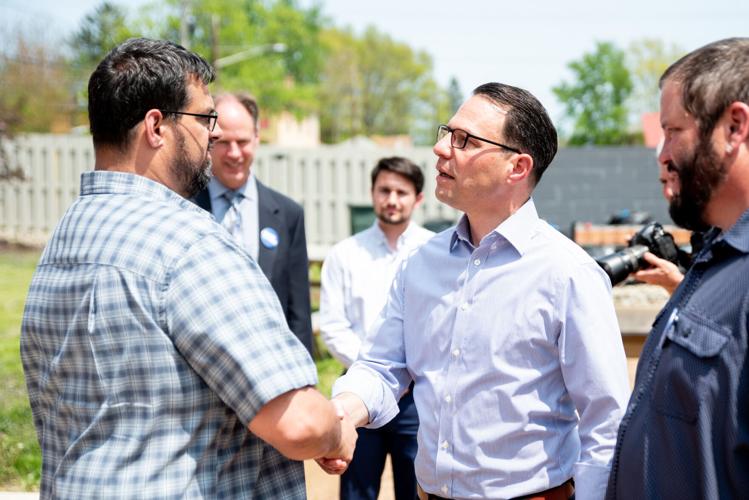 Todd Clary, United Steelworkers staffer, left, presents Pennsylvania Attorney General and Democratic candidate for Governor Josh Shapiro with a $50,000 donation for his campaign during a visit Thursday at the New Deal Club in Farrell. 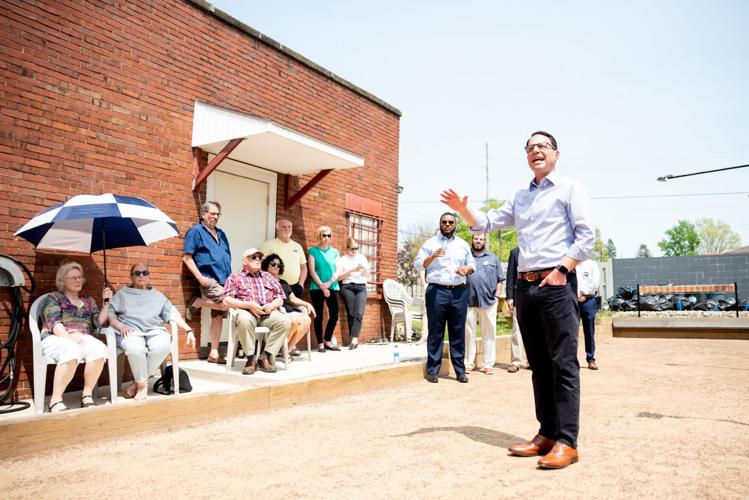 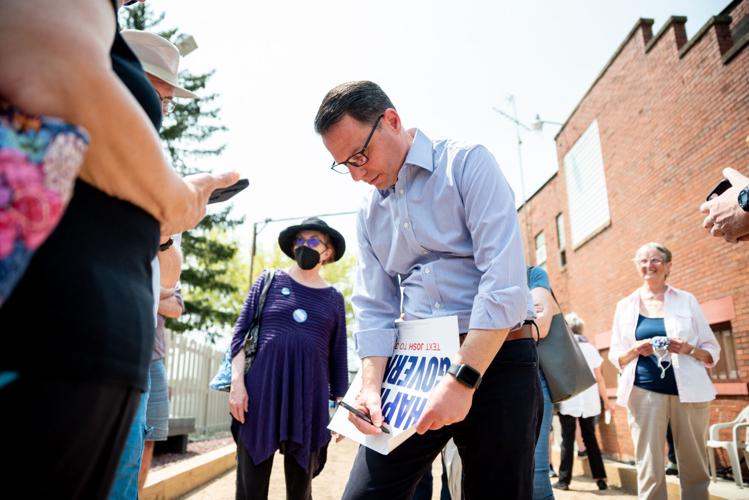 Pennsylvania Attorney General and Democratic candidate for Governor Josh Shapiro autographs a sign during a campaign stop Thursday at the New Deal Club in Farrell.

FARRELL — With the primary on Tuesday, Democratic governor candidate Josh Shapiro paid a visit Thursday to Farrell’s New Deal Club, the only one left of its kind in the United States, with running mate Austin Davis.

Shapiro, attorney general since 2017, has traveled throughout the state in the last few weeks, stopping in Erie and Meadville before the Farrell stop and visiting Pittsburgh afterward.

Davis is facing off against state Rep. Brian Sims and Ray Sosa for the Democratic lieutenant governor nomination.

State Rep. Mark Longetti, D-7, Hermitage, kicked off the event, reflecting on his personal experiences with Shapiro and Davis.

“We have two wonderful candidates,” Longetti said. “I’ve served with both these gentlemen in the house. and if you’ve ever been to the house, it’s not the most attentive place … But there are certain people that when they take the House floor, the chamber goes silent, and Josh Shapiro and Austin Davis are two of those people.”

In the last week of a heated campaign for lieutenant governor, Davis delivered a simple message — to be a strong governing partner for Shapiro and to be a “champion for working class families.”

Davis recalled his similar upbringing and many experiences to the area. His mother is a hairdresser, and his father is a bus driver. Because of his parents’ hard work, Davis and his sister became first generation college students.

“My parents worked extremely hard, just like each and every one of you works hard for your families to give your children the best opportunity possible,” Davis said. “Because of their hard work, I went on to become the first African American to ever win a state legislative district outside of the city of Pittsburgh in western Pennsylvania. That’s something I’m deeply proud of.”

Davis, a native of Allegheny County, began his public service career at 16 years old when someone on his block was the victim of gun violence, which led him to a McKeesport City Council meeting because he “wanted to do something.”

“The first thing that I noticed was that there was nobody that looked like me in city government, and there was nobody in my age group,” Davis said. “And so instead of waiting for somebody else to get involved and help my community, I took action. I started a youth-led gun violence prevention program when I was 16 years old.”

From there, Davis attended the University of Pittsburgh and came back to his hometown, continuing his voice for working class citizens and representing underrepresented communities.

“The community I come from is just like this [Farrell] community, and many people here who live in places similar to this feel like they’ve been unheard, unseen and forgotten in halls of power in Harrisburg, and Washington,” Davis said. “I hope each and every one of you sees my campaign and my candidacy as a vessel for your concerns. and I hope you see a Shapiro-Davis administration as your rightful seat at the table.”

Shapiro then took over the conversation and laid out the main points of his campaign, touching on everything from mental health to education to voting rights, stating that there are two things on the ballot: opportunity and freedom.

“I think we have an opportunity to build the kind of coalition to make sure we build a world class education system in the Commonwealth of Pennsylvania, one that not only invest more funds in our schools, but one where we finally do away with our reliance on standardized testing and reclaim that time in the classroom,” Shapiro said. “Reality is, we have got to invest in our schools, where you walk down the hall, and you have great teachers, nice classrooms, and a mental health counselor in every single building for our children.”

Shapiro said he also wants to increase funding specifically for the areas of rural Pennsylvania “to help with the kinds of investments that farms and other businesses need.”

The speech then took a turn to address the freedom aspect of Shapiro’s campaign, touching on current union bills.

“Think about the right to join a union, the freedom to be able to live your professional life the way you want,” Shapiro said. “That’s on the ballot, the next governor of the Commonwealth of Pennsylvania is gonna get a bill on his desk, trying to make us the so-called right to work state, ending the union way of life. Here’s what I know, I’ll veto that bill and preserve and protect the union.”

“There’s another freedom issue, which is whether or not bodily autonomy is something that we respect here in the Commonwealth of Pennsylvania,” Shapiro said. “I believe that the women of Pennsylvania should make decisions over their own bodies, not the politicians. The choice as to when you want to have a family, and on what terms you want to have a family is yours, and that is something that I think is critically important.”

Shapiro closed by addressing voting issues brought up by the Jan. 6, 2021, attack on the U.S. Capitol, referring pointedly to Mastriano, who took part in the protest, but said he left when the march turned violent.

As the approximately 75 people who attended the speech got the chance to talk one-on-one with Davis and Shapiro after their speeches, Todd Clary, a staffer the United Steelworkers of America made a $50,000 donation to the Davis-Shapiro campaign.

Shapiro used the donation moment for a humorous soundbite.

”Thanks to the Steelworkers, you’re going to see this face on TV more often,” he said.