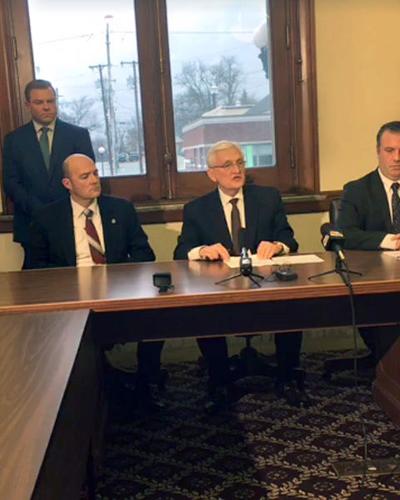 RACHEL SAPIENZA | Herald“By all measure, when Sean Hake exited that vehicle and brandished a knife, that set the tone of the encounter,” Mercer County District Attorney Miles Carson said Tuesday in concluding the investigation. 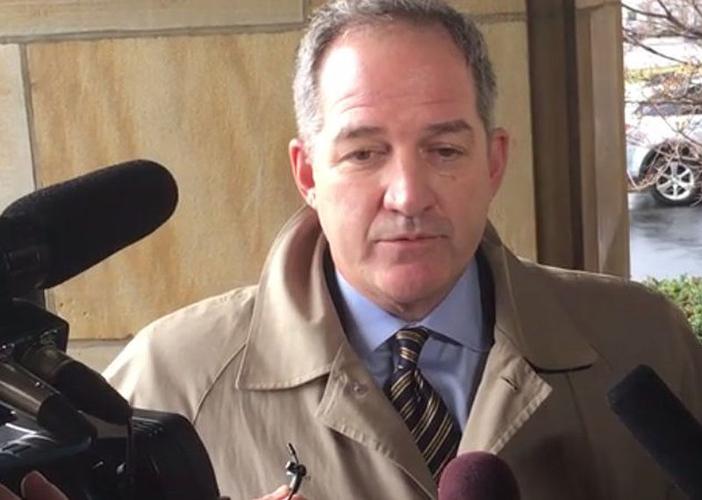 RACHEL SAPIENZA | HeraldFrank Moore, a lawyer from Pittsburgh representing the family, said after the news conference that the family believes deadly force was not warranted and that Sean Hake’s mental health illnesses were a factor in the incident.

RACHEL SAPIENZA | Herald“By all measure, when Sean Hake exited that vehicle and brandished a knife, that set the tone of the encounter,” Mercer County District Attorney Miles Carson said Tuesday in concluding the investigation.

RACHEL SAPIENZA | HeraldFrank Moore, a lawyer from Pittsburgh representing the family, said after the news conference that the family believes deadly force was not warranted and that Sean Hake’s mental health illnesses were a factor in the incident.

MERCER – Three Sharon police officers have been cleared of any wrongdoing in the Jan. 6 shooting death of 23-year-old Sean Hake.

Mercer County District Attorney Miles K. Karson Jr. announced Tuesday at a news conference in the courthouse that no charges would be filed against the police officers. Karson said he made the decision after he and others in his office independently reviewed the report from the state police investigation.

“The circumstances in this particular case right from the get-go were life and death, based on the actions of Sean Hake,” Karson said. “The police officers reacted to the circumstances that were created by Sean Hake.”

Karson said police were told that night that Hake had held a utility knife to his mother’s neck and threatened to kill her.

When police got to the Tamplin Street house, Hake was sitting in a car in the alley next to the house. Hake was holding a utility knife and blood was dripping from his wrist, Karson said.

The officer thought Hake might have been stabbed and called for an ambulance, Karson said. The officer tried to talk to Hake and then Hake got out of the car and quickly moved toward him.

“Officer one gave clear and concise commands to drop the knife and get onto the ground,” Karson stated.

Two more officers pulled up and commanded Hake to drop the weapon, the DA said. Hake again moved quickly toward the first officer, getting within 7 to 10 feet of him while waving the knife in his direction.

Karson said the officer backed away and Hake said, “You are going to have to kill me or I am going to kill you.”

Another of the officers yelled to Hake and Hake turned his attention to him, coming within 6 or 7 feet of him, Karson said.

“The officer fired a third shot, which stopped Hake,” the DA said.

An officer performed CPR on Hake until the ambulance arrived, Karson said.

Karson said an autopsy showed that – in addition to the three gunshots in Hake’s torso – there were self-inflicted cuts to his wrists and throat.

During the news conference Karson was asked whether the investigation looked into why police did not use a Taser to subdue Hake.

“We considered everything as part of our investigation,” Karson said. “By all measure, when Sean Hake exited that vehicle and brandished a knife, that set the tone of the encounter.”

But “the family has a different take,” said their attorney, Frank Moore, a personal injury lawyer from Pittsburgh.

Moore said after the news conference that the family believes deadly force was not warranted.

“Sean’s had a sad and tragic life,” Moore said. “Unfortunately, Sean had these mental health illnesses that he had lived with for quite some time.”

Moore said Sharon police knew Hake’s history, having dealt with the family many times in the past.

According to court records, Hake’s mother had a Protection From Abuse order against her transgender son, issued by a Mercer County judge in June 2015.

Hake was arrested at least twice for violating that order, according to court records, the latest time on March 21.

“So it was something that the Sharon police obviously knew about and the family had lived with,” Moore said. “And so it was not an odd or unusual isolated circumstance. These people had dealt with that family. I’m sure they didn’t like dealing with the family.”

Moore said he didn’t know if the mental health issues had to do with Hake transitioning from a woman to a man.

“I don’t know if that was it, because this has been going on for quite some time – many years,” Moore said. “There’s been involuntary commitments in the past but never a situation where’s there’s been any use of weapons or deadly force.”

The officers involved have been on administrative leave since the night of the shooting, Karson said.

Sharon police Chief Gerry Smith was called to the scene, and the three officers were immediately removed from the scene and separated, Karson said.

“It was protocol that the officers involved were placed on administrative leave during the investigation,” Smith said Tuesday.

Smith went on to say that Pennsylvania State Police were immediately called to lead the investigation, “in an effort to remain completely transparent to the community that we service.”

Even though the investigation is concluded the officers won’t be back to work right away. “There are some administrative procedures that need to be completed before the officers can return to full duty,” Smith said

Moore said he does not know if the family is planning to file a lawsuit.

“I’ll talk to them, we’ll look at all the evidence and they can make their decision,” Moore said. “But right now none of that’s been contemplated.”

“She heard the shots, and that was a big issue. She heard three rapid shots,” Moore said. “She did not hear two shots, a break and then a third shot.”

“(Loya) could not come in today, and it’s been very difficult,” Moore said.

The Herald live streamed the news conference on www.facebook.com/sharonheraldnewspaper