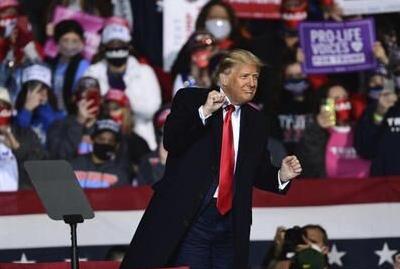 John Rucosky | Johnstown Tribune-DemocratPresident Donald Trump dances to a soundtrack after firing up a large crowd Tuesday during an airport rally in Johnstown, Pa. 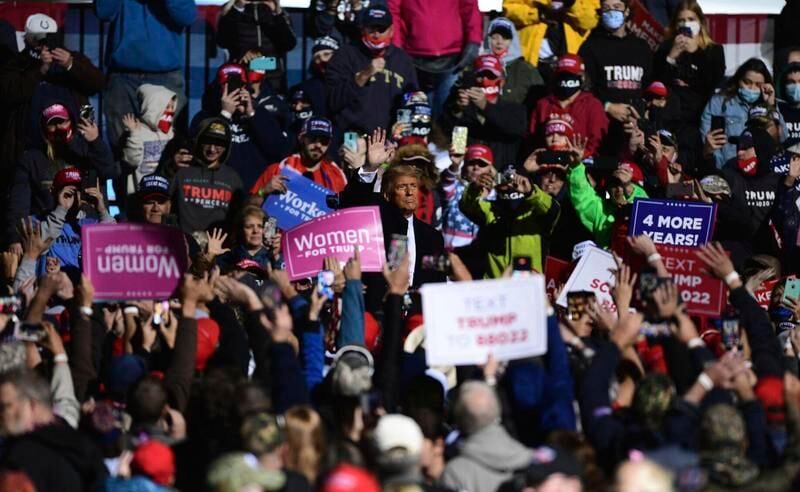 John Rucosky | Johnstown Tribune-DemocratPresident Donald Trump works his way through the crowd to Air Force One during a campaign rally Tuesday in Johnstown, Pa. 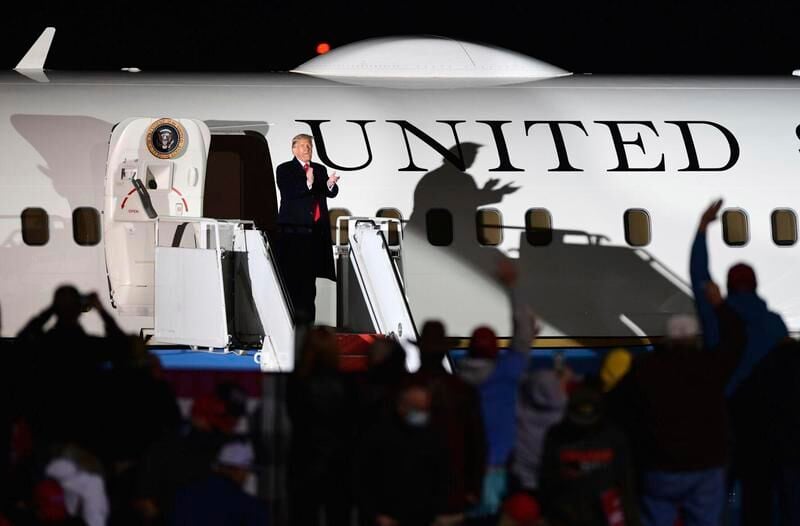 John Rucosky | Johnstown Tribune-DemocratPresident Donald Trump applauds for the crowd before boarding Air Force One after a campaign rally Tuesday in Johnstown, Pa.

JOHNSTOWN, Pa. – A week after being released from the hospital where he was treated for COVID-19, President Donald Trump held a rally in Johnstown Tuesday during which he talked about the need for a coronavirus vaccine.

He claimed Operation Warp Speed – a collaborative effort of components within the U.S. Department of Health and Human Services – will deliver 100 million vaccine doses before the end of the year. He spoke at John Murtha Johnstown-Cambria County Airport to an enthusiastic crowd that was unofficially estimated at 6,000.

No vaccines have been approved yet for use in the United States.

“Under my leadership, we’re delivering a safe vaccine and a rapid recovery, and, if you vote for me, prosperity will surge,” Trump said. “Normal life, normal life.”

He later added: “The vaccine will end the pandemic once and for all.”

Trump’s event took place on the same day the nation’s COVID-19 death count closed in on 221,000, the highest total of any country, and the unemployment rate stood at about 8 percent, as a result of the pandemic’s impact on the economy. More than 8 million Americans have tested positive for the coronavirus.

“Everyone fighting to recover from the virus, I feel your pain because I felt your pain, and we will beat this virus together,” Trump said.

Trump covered a wide range of issues during his hourlong speech, including support for building a wall on the border with Mexico, banning sanctuary cities, protecting Second Amendment rights, growing manufacturing and moving forward his nomination of Judge Amy Coney Barrett to the Supreme Court.

“We will stop the radical indoctrination of our students and restore patriotic education to our schools,” Trump said.

He pledged to grow coal mining and fracking, the process of using pressurized chemical fluids and water to crack rocks and extract natural gas, which is opposed by numerous environmentalist organizations.

“While I am president, America will remain the world’s No. 1 energy producer – with Pennsylvania workers leading the way,” he said. “And that’s what’s happening.”

Trump, a Republican, spent much of the rally contrasting his record to that of former Vice President Joe Biden, the Democratic Party’s presidential nominee.

The president attempted to portray his opponent as an extremist on several occasions, including on the issue of law enforcement.

“Biden has made a corrupt bargain – in exchange for his party’s nomination, he has handed control to the Socialists, and Marxists and left-wing extremists,” Trump said.