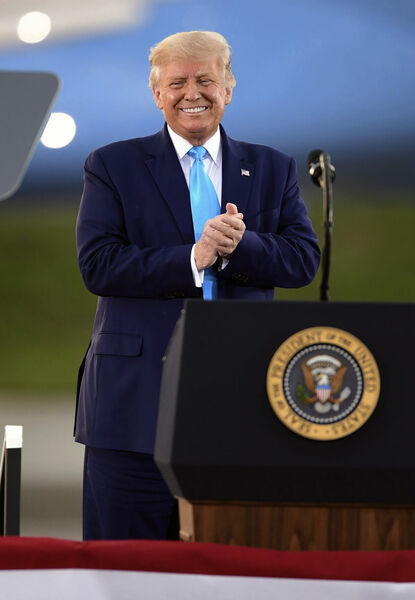 John Rucosky | CNHIPresident Donald Trump reacts to cheers from his supporters during a campaign stop Thursday in Latrobe, Pa. 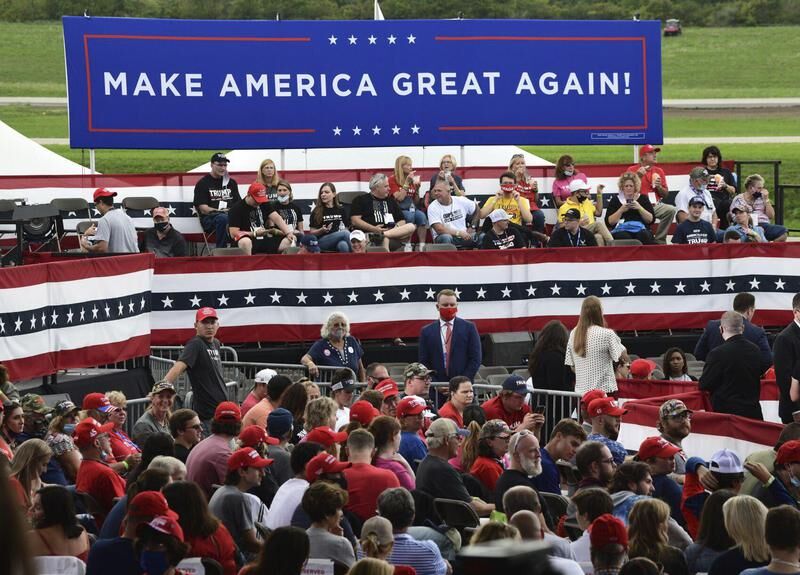 John Rucosky | CNHIPresident Donald Trump reacts to cheers from his supporters during a campaign stop Thursday in Latrobe, Pa.

LATROBE, Pa. – President Donald Trump praised himself for the handling of the COVID-19 pandemic, while suggesting that he would easily be winning the 2020 race if not for the virus outbreak, during a rally at Arnold Palmer Regional Airport on Thursday.

He described his opponent, former Vice President Joe Biden, the Democratic Party nominee, as a “puppet of the socialists, Marxists and the cop-hating extremists” when addressing hundreds of enthusiastic supporters.

Trump also referenced riots occurring in cities across the nation during his remarks that lasted about an hour and a half.

COVID-19 has factored into the deaths of more than 190,000 Americans and led to an economic collapse due to businesses being closed as part of mitigation efforts.

Trump said the shutdowns, in states such as Pennsylvania and New York, have been done for “political reasons” in an attempt to hurt his campaign.

He pointed to work being done on a COVID-19 vaccine, which he says has been at an accelerated pace, as a sign that “we’re rounding that turn.” He predicted the vaccine could be approved before the end of October or the end of the year.

Trump spoke about the protests taking place since the death of George Floyd, an unarmed black man who lost consciousness when a Minneapolis police officer kneeled on his neck, an incident captured on a video recording. Protests have turned violent in several cities, including Pittsburgh, Seattle and recently Portland, Ore.

“We could end it in Portland in a half an hour,” Trump said. “We did it in Seattle.”

In political terms, Trump said, “The rioters want Biden to win. They want him to win because the agenda is what they want. It’s the craziest thing I’ve ever seen.”

Trump added: “Biden’s plan is to appease the domestic terrorists, and my plan is to arrest them and prosecute them”; and, “He wants to surrender your nation to the radical left-wing lobby. He’s trying to change now. He says that’s not working because we’re going up and he’s dropping like a rock.”

Regarding the economy, the president offered support for the fracking industry, while also accepting an endorsement from the Boilermakers Local 154. Trump responded by calling boilermakers “the heart of the country.”

Wearing a T-shirt with an image of Trump as a Rambo-like figure holding a rocket launcher, Craig Watson talked about “hope on the horizon” when offering his support for the president prior to the rally.

Watson, from Belle Vernon, Fayette County, touched upon two of the major issues affecting the nation – the COVID-19 pandemic and protests against racism and police violence that, in some cities, have turned violent.

“We’re just coming out to hear the same message that he’s been giving all along, positive, good economic outlook, and the fact we shouldn’t be allowing cities to burn,” Watson said. “Something needs to be done. There should be law and order. We just appreciate everything he’s done. The economy was booming before the pandemic, and I think it will return to that if he’s reelected.”

His wife, Susan Watson, said she came to hear Trump “because I love that he loves his country as much as I do. And he stands for things I stand for. Socialism isn’t one of them, and I hope it never will be.”

Marcus Wise, from Jeannette, said he appreciates “everything he’s done for the country so far the four years he’s been in.”

“I think the whole virus is completely blown out of proportion,” Caleb Bertak, a Jeannette resident, said. “I think that it’s being used to attempt to sway the election.”

“He will not talk much about these challenges because what he wants to do is distract and get back to his usual approach to governing, which is pretty simple,” Casey said. “I’ve summed it up in four words and I’ll say it again. His whole approach, whether it’s the campaign or governing, is this – fear, smear, demonize and divide. It’s what he does every day. He never tries to unite and build. He never tries to bring folks together to move the country forward.”

Cerilli said, in her opinion, “Donald Trump is simply not up for this job.”

“Pennsylvanians have suffered at the hands of a weak and incompetent president,” Cerilli said. “People are sick and tired of the constant crisis, the chaos, the lying and the circus of the White House.”

Nancy Jane Adams (née White), 92, passed away Sept. 19, 2020, in Jacksonville, Fla., after a long battle with Alzheimer's Disease. She was the daughter of the late Kenneth and Hazel (Pollack) White. Nancy was preceded in death by her husband of 56 years, Harold N. Adams; one son, William "Bi…