Coils of rolled steel sit in the storage yards beside NLMK Pennsylvania's Farrell plant. The coils are rolled from slabs of steel, most of which is imported. 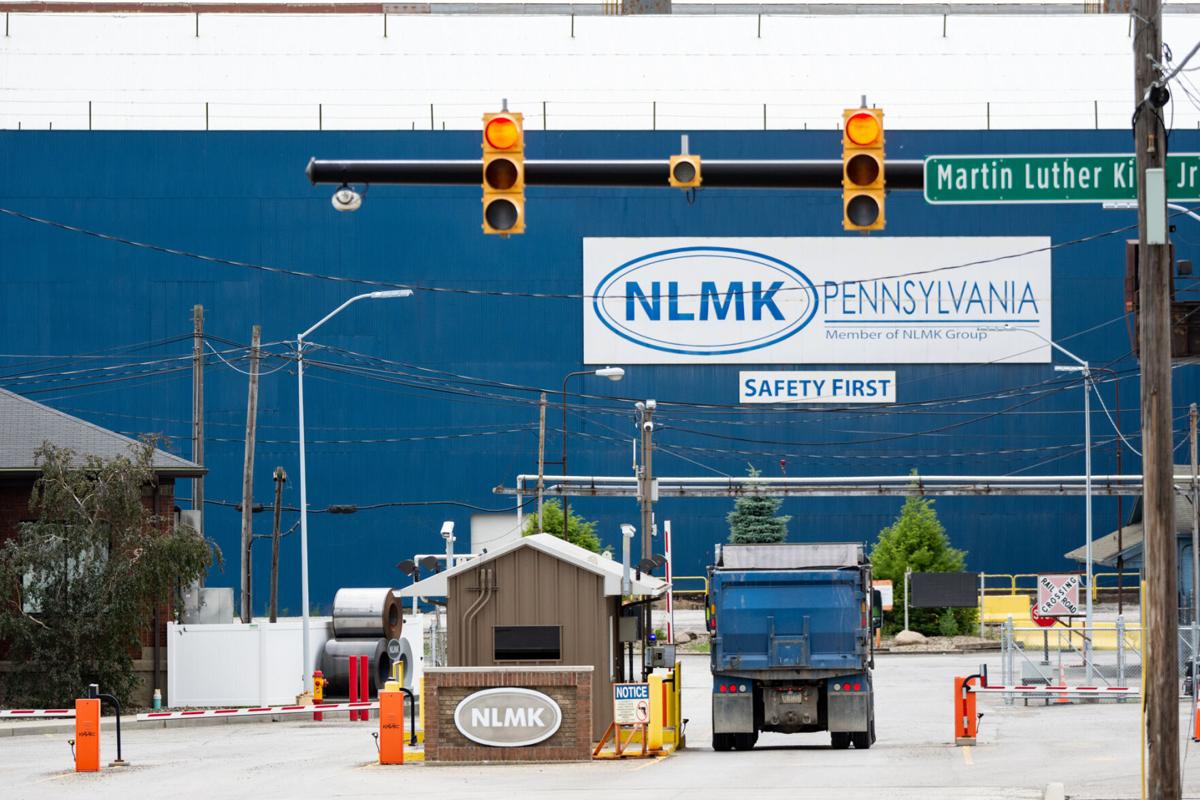 The main gate at NLMK Pennsylvania in Farrell.

Coils of rolled steel sit in the storage yards beside NLMK Pennsylvania's Farrell plant. The coils are rolled from slabs of steel, most of which is imported.

The main gate at NLMK Pennsylvania in Farrell.

FARRELL – With contract negotiations between management and 415 union workers at NLMK’s Farrell steel plant at an impasse, both sides are facing a strike deadline of 3 p.m. today.

Leaders for United Steelworkers Local 1016-03, representing production and maintenance workers at the steel plant, announced the deadline Friday in a news release that cited a high-deductible health care plan they don’t trust as a key reason for the strike.

But a more complex situation might develop if a strike unfolds.

“We’ve been a supplier to a very loyal customer base,’’ said Bob Miller, NLMK Pennsylvania’s president, said in a brief phone interview Friday evening. “And we have a contingency plan in place should a strike happen. And we will begin to prepare for those plans.’’

Miller did not cite specifics on the contingency plan. NLMK operates a steel plant in Portage, Ind., but it wasn’t immediately known if the Indiana plant could assume any of the Farrell factory’s production capacity.

NLMK also operates Sharon Coatings, which employs around 200, nearby in Sharon. The USW represents production and maintenance employees at that plant, but the Sharon Coatings employees work under a separate contract. The Farrell mill provides much of the steel used in the Sharon plant.

NLMK employs 550 at its Farrell plant, giving the company 750 workers in Mercer County. NLMK was Mercer County’s sixth-largest employer in the last quarter of 2019, the latest figure available, according the state Department of Labor & Industry.

Both sides are showing signs of hunkering down.

“We’ve stood together to survive during hard times in the past and know that we can accomplish great things through solidarity and collective action,” McAuliffe said in the news release. “NLMK needs to stop breaking the law and negotiate in good faith with workers for a fair contract.”

The USW said in the release that it filed unfair labor practice charges against NLMK “based on the company’s failure to provide information necessary to bargain on an informed basis, management’s refusal to process grievances and for unilaterally changing benefits to exclude the family of a deceased employee, effective immediately upon their death.”

NLMK Pennsylvania, which operates the Farrell mill, is a subsidiary of the Russia-based NLMK parent steelmaker. The local factory has been going through difficulties for more than two years, since President Donald J. Trump announced 25 percent tariffs on foreign-made steel in March 2018.

The company has paid more than $150 million in tariffs.

Last year, the U.S. Commerce Department rejected requests for tariff relief from NLMK’s U.S. factories. Miller said earlier this year that the company is trying to purchase steel in countries exempt from the tariff.

In its press release, NLMK said, “It is very unfortunate that the union has adopted the position that it is conveying to the public in order to garner sympathy and community support.’’ It added that even during a global pandemic and a depressed steel market the company was offering union workers an average wage increase to the employees’ compensation benefit package amounting to nearly $27,000 over the proposed four-year contract.

The company said that, while the union listed a change in the healthcare plan as one of the reasons for walking off the job, NLMK’s most recent offer is an improvement over their current healthcare benefits.

“Contrary to the union’s position NLMK has not broken the law nor failed to abide with its contractual obligations,’’ the release said. Since April NLMK has continued the provisions of the expired contact while making no changes to the employees’ working conditions, wage or overall benefits, the release said.

“The union is only raising this issue for extended healthcare coverage to the families of deceased employees for the first time as a justification for supporting its decision to walk away from the bargaining table and engage in a work stoppage,’’ the release said. “The truth is that healthcare coverage has not changed and this latest accusation is nothing more than a tactic used buy the union to try to shed a negative light on NLMK by creating an issue where none exist.’’

While the company is ready to negotiate, Miller said no new bargaining sessions had been set as of Friday evening.

The last time a major union went on strike in the area was when Wheatland Tube Co. workers represented by the United Steelworkers walked off the job in 2003. The 470 union workers struck for five months mainly over healthcare insurance.

Dorothy A. (Elliott), 82, of Hermitage. Visitation and service: None, in keeping with Dorothy's wishes. Burial: Morefield Cemetery. Online condolences may be offered by visiting stevensonfuneralhome.net. Arrangements are being handled by the HAROLD W. STEVENSON FUNERAL HOME LLC., 264 E. Stat…